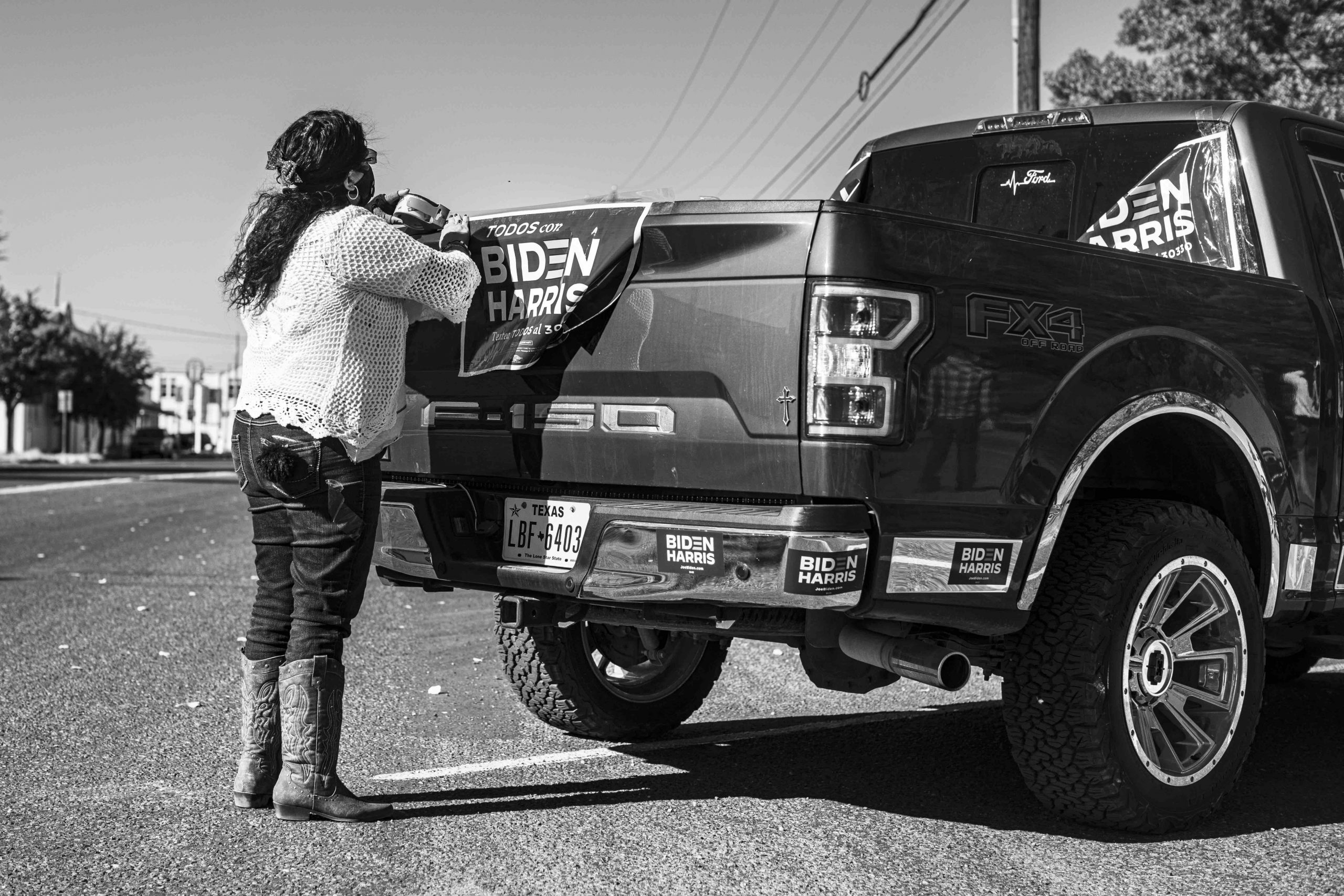 Outside the Marfa polls on Tuesday’s Election Day, a woman covers her truck with Biden/Harris paraphernalia. Locally, Presidio County went overwhelmingly blue, maintaining the county’s unique position as a rural and sparsely populated Democratic stronghold in Texas. But in the end, Trump took Texas’ 38 electoral votes, dashing Democratic hopes that Texas would turn blue this year. With millions of votes still uncounted, no candidate has been definitively declared the winner of the U.S. presidency. Photo by Maisie Crow
Subscribe

TEXAS — Late on Tuesday night, Associated Press called Texas for Donald Trump. And yet at press time, Joe Biden still had several avenues for victory in the electoral college, including through flips in Arizona and Georgia or through a narrow victory in the once-Democratic strongholds in the Rust Belt.

As polls showed a tight race in the Lone Star State, Texas found itself in an unlikely position as a possible swing state in one of the most polarizing elections in recent history. But Biden never banked on Texas for victory, with advertising spending here relatively low compared to true battleground states like Florida. And many Texas Democrats — jaded from years of talk of Texas “turning blue” — were wary of getting their hopes up.

Those instincts proved correct. At press time on Wednesday morning, more than 5.8 million Texans had voted for Trump, versus around 5.2 million who voted for Biden. With around 96% of ballots now counted in the state, the results give Trump a statewide victory with around 52% of the vote.

At the local level, Presidio stayed a Democratic stronghold, with both Trump and Biden earning more votes than was the case in 2016. Brewster County stayed Republican, and Jeff Davis County even more so.

Several rural counties even appeared to have flipped for the incumbent president, including Reeves County in West Texas, Val Verde in Central Texas and Kenedy County in South Texas. The rightward drift in South Texas, where at least seven counties appear to be flipping from Clinton in 2016 to Trump in 2020, is particularly noteworthy considering the region was hit hard by coronavirus just months ago.

After months of anticipation, election night was in general a disappointment for Texas Democrats. At press time, as The Big Bend Sentinel is also reporting this week, Democrats had either lost or appeared to be losing not only the state house contest but several closely watched U.S. congressional districts, including TX-23, where Democrat Gina Ortiz Jones conceded to Tony Gonzales on Wednesday morning.

Texas saw historic voter turnout this year, as many young urban voters chose Biden. Suburban areas in Houston, Austin and Dallas/Fort Worth continued their leftward drift. But in the end, it wasn’t enough for a Democratic rout in the state, even in the smaller, down-ballot races.

Viewed another way, the statewide elections were also a reminder of just how gargantuan Texas is. At press time, there were more Biden voters in Texas than in New York, with around 5.2 million in Texas and 4.2 million in New York. Almost four times as many people voted for Biden in Texas than in Arizona, where — despite being a key battleground state — the Democratic challenger had racked up just around 1.4 million votes at press time.

At press time, the United States presidential election had not yet been called. Tight races were still being sorted out in swing states like Wisconsin. Florida, which Democrats hoped to flip, stayed with Trump.

In remarks on Wednesday, Trump declared victory and once again alleged widespread voter fraud with no evidence. “This is a fraud on the American public,” he said. “We want all voting to stop. As far as I’m concerned, we already have won.”

Trump also said he would be “going to the Supreme Court,” though at press time, it’s unclear what legal case if any he plans to mount there. Observers across the world criticized Trump for prematurely declaring victory, including not only U.S. news anchors but also foreign governments. Top officials in both Ireland and the United Kingdom encouraged Americans to wait for the final results.

In short: Despite Democratic dreams in Texas, the Lone Star State stayed red. It was a microcosm of the scene across the country, where Democrats hoping for a landslide against Trump’s presidency instead got a nail-biter.

But the Texas election was remarkable in other ways. At press time, Trump appeared to be carrying the state by just around six points — an even tighter margin than in 2016, when Trump defeated Clinton in the Lone Star State by around nine points. Democrats will likely point to those results and argue once again that Texas could someday turn blue. But with a deeply polarizing incumbent president, it remains to be seen whether the close victory was just conservatives disapproving of Trump or a sign of bigger changes to come in the Lone Star State.