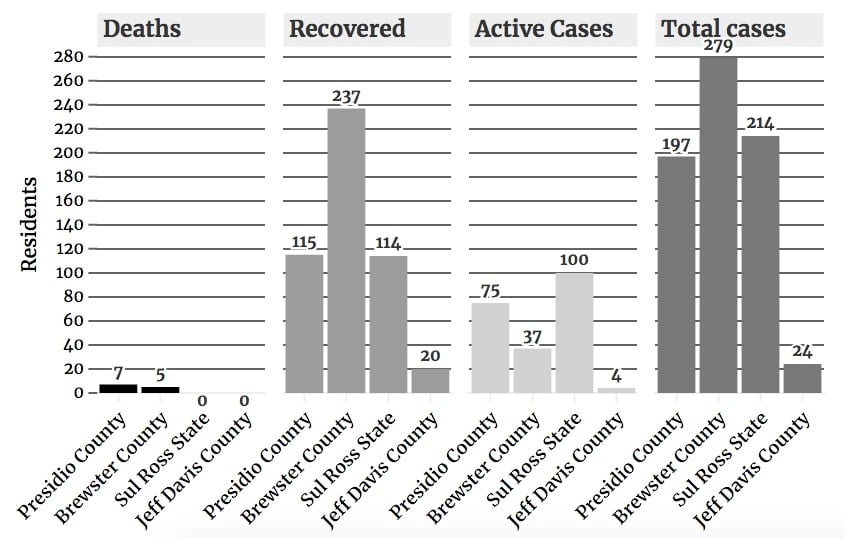 Sul Ross State University does not release information on the number of recoveries. To calculate this number, The Big Bend Sentinel is subtracting the number of active cases at the school (100) from the number of total cases (214). As The Big Bend Sentinel reported this week, state health officials count cases among college students at their permanent address, making it difficult to tell how many of the SRSU cases are in Alpine or whether there is any overlap with Brewster County’s current official count of 37 active cases. Sources: the Texas Department of State Health Services and Sul Ross State University.
Subscribe

ALPINE — Texas state data is not giving an accurate picture of coronavirus spread in Alpine, including active cases. At press time on Tuesday, the state’s latest figures showed Brewster County with 37 active cases — but that number doesn’t include all the cases found by Sul Ross State University.

Brewster County’s 37 active cases pale in comparison to Presidio County, where the state at press time had recorded 75 active cases. The growing numbers in Presidio County have prompted policy and lifestyle effects, with some residents hunkering down and Marfa City Council on Tuesday renewing local mask rules and other coronavirus precautions.

But the case count in Brewster County — including in Alpine alone — is likely significantly higher than the state’s figures. Sul Ross State University, which has offered regular free testing to employees and students, at press time showed 93 confirmed coronavirus cases among students and 7 in its faculty and staff, for a total of 100 cases.

That university figure is around three times higher than the official tally for all of Brewster County and suggests the state is undercounting local cases. But because of a quirk in how Texas counts cases at universities, few of those cases are showing up in local data.

Dr. Ekta Escovar, the former health authority for Brewster County, explained some of these issues at an Alpine City Council meeting in September. The state tabulates cases based on the permanent residence for a patient, she said — and for many university students, that meant getting counted where their parents lived.

Regardless, Escovar explained, many SRSU students lived in dorms, attended in-person classes and otherwise interacted with people in Alpine. She argued it was important to count those cases in Alpine, where the infections were actually occurring. She cited this as one reason why local Brewster County figures were sometimes higher than the state.

But faced with regular hostility and anger from people who oppose coronavirus restrictions, Dr. Escovar resigned in September, as The Big Bend Sentinel previously reported. And after witnessing Dr. Escovar’s experience in the unpaid role, county officials say local doctors have so far been uninterested in replacing her. “There are no takers,” County Judge Eleazar Cano said at a commissioners court meeting last month.

Brewster County had been “spoiled” by Dr. Escovar, Cano said — and without her, the county was experiencing data issues that were “typical” for small counties. That has meant less detailed data on positivity rates and testing figures. It’s also made it harder to parse out how many infections are coming from Sul Ross State University.

Of the 100 SRSU-linked cases, it’s unclear at press time how many are in Alpine. Erik Zimmer, the city manager of Alpine, estimated that around 10 to 15 percent of the student body had permanent addresses in Brewster County and therefore would be counted locally, as part of the state’s total of 37 active cases.

Dean Wilkinson, a spokesperson for the university, said that most of the confirmed positive cases had been found through testing at the school, indicating that most of the 100 SRSU active cases are within reach of campus. But the school says some students are also self-reporting their cases, whether they’re currently in Alpine or staying home for the semester.

At press time, The Big Bend Sentinel was unable to definitively determine how many of the 93 active student cases were linked to students in Alpine. When asked about these figures, Michael Pacheco, an SRSU official helping to lead the school’s coronavirus response, said that “SRSU students living in other communities” could also be included in the tracker. But he did not include a percentage or number.

Asked what the school was doing to share data with local officials in Alpine and Brewster County, Pacheco said school administrators “routinely coordinate with local officials.” But he did not comment when asked whether the state was undercounting local numbers and whether this could be giving Alpine locals a false sense of security, stating that SRSU has “no data which would be responsive to your request.”

Zimmer, the Alpine city manager, has lamented the lack of good local data since Dr. Escovar’s departure. While Brewster County continues to search for another volunteer local health authority, Dr. Rachel Sonne, the administrator for Region 9/10 for the Texas Department of State Health Services, is currently filling in.

But Dr. Sonne, Zimmer said, has her hands a little bit full at the moment. “Our regional health authority is based out of El Paso, which is one of the three or four hot spots in the nation right now,” he said. “Her attention and focus is on El Paso.”

Wondering who can get a COVID-19 vaccine booster shot and when? Here’s what Texans need to know.

By Allyson Waller / The Texas Tribune