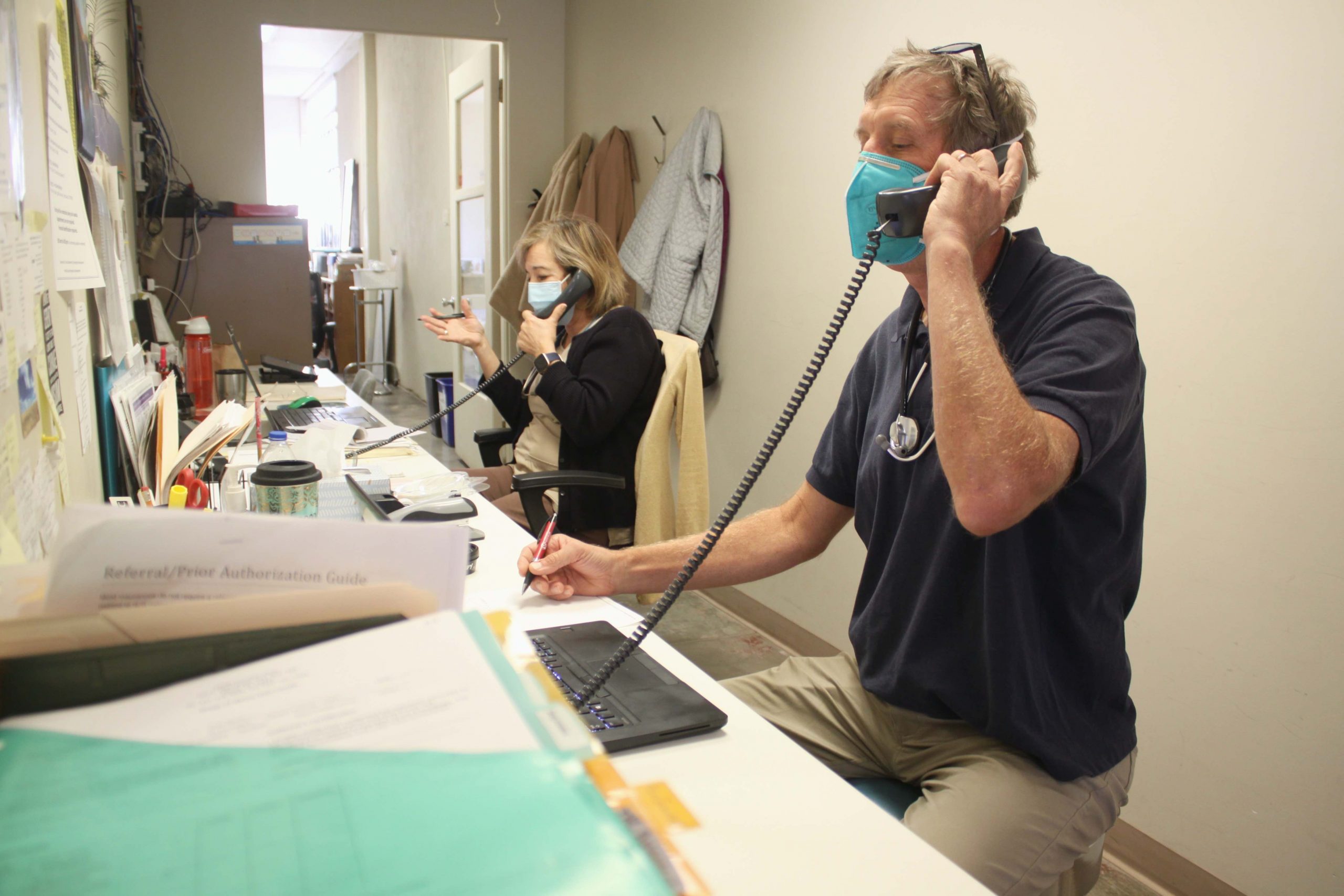 Don Culbertson, front, and Leticia Garcia, back, interview patients this week as part of their work for Marfa’s city-run contact tracing team. Marfa’s contact tracing program has so far contacted 63 locals who had possible exposure to coronavirus, Culbertson told city leaders in a presentation last week. Of those, more than a third turned out to be positive. Photo by J.D. Garcia
Subscribe

MARFA — Despite being in existence for just around two months, Marfa’s three-person team of contact tracers has already caught more than 20 coronavirus cases and has likely stopped around the same number of potential new infections from occurring.

That was the big takeaway from a presentation at a virtual city meeting last week, where Don Culbertson, the head of Marfa’s contact tracing team, gave updated statistics on the city-run program.

In total, Culbertson said on Thursday, the Marfa contact tracing team had investigated 24 people who tested positive for coronavirus. From those contacts, the team found 63 other people who had likely been exposed to a confirmed positive case.

The team then followed up with those people within hours, asking them about their symptoms and getting them coronavirus tests if warranted, according to Culbertson. And of that second group, 22 — or around a third of them — ended up testing positive for COVID-19.

At a minimum, that means Marfa contact tracers identified 22 locals with coronavirus, including people with no symptoms, and told them to isolate before they could spread the disease. But that number doesn’t reflect the impact of preventing spread to the people that the second group could have come in contact with, if not for the speedy tracing.

Based on local data, Culbertson gave the transmission rate in Marfa — that is, the average number of new infections that result from an infected person, also known as the R-naught of a virus — at 0.9. In other words, if 10 Marfans are confirmed to have coronavirus, they would likely spread it to an average of 9 people.

Extrapolating from the data, those 22 infections could have infected around 20 more people if they hadn’t isolated early. That’s a total of around 42 cases that Marfa’s contact tracing team handled at critical early stages, counting both the 22 cases that were identified and an estimated 20 cases that were likely prevented altogether. (With more testing in the region last week, Culbertson stressed that this transmission rate might not still be up-to-date.)

City leaders at the time argued that they could more quickly identify and trace local cases and lobbied state officials to set up a more collaborative relationship. Those efforts seem prescient, especially now that those same state officials are struggling to manage outbreaks in El Paso and throughout the region.

The program isn’t without problems. In an interview on Monday, Culbertson said he was still waiting on official approval to trace people in outlying neighborhoods like Sal Si Puedes, which are outside city jurisdiction.

Culbertson also worries not enough Marfans know about the program and hopes city officials will keep running public service announcements. Of all the cases the team has worked, he estimated he’s found at least half through data provided by regional health workers. But as the region sees a case-spike, local health officials now warn they’re not getting the same quality of data from the state.

Regardless, the program is earning admirers in Presidio County and beyond. County

Judge Cinderela Guevara, who at first was skeptical that Marfa was even allowed to set up local contact tracing, credits the program with stopping more infections in the area.

“I believe it has been very effective,” Judge Guevara said of the program in an interview Monday. “There’s been situations where I think if contact tracing wasn’t happening, then there would be even more infections.”

Teresa Todd, the city attorney for Marfa who helped arrange the agreement with state health officials, felt the same. She called the efficacy of the program “very encouraging” and said it was helping locals who “probably would not have received that help otherwise.”

“I know it’s working,” she said of the city’s contact tracing efforts. “I know a lot of times we give info to DSHS [the Texas Department of State Health Services] before they give it to us.”

Other local governments in the region have already started reaching out, in hopes of tapping into Marfa’s expertise. Presidio has reached out about improving their local testing, Culbertson said. In addition to the city contact tracing team, Marfa city officials have also approved a rapid-testing machine.

Todd, who also serves as the county attorney for Jeff Davis County, said she’s also been in talks with county officials about setting up contact tracing there, either on their own or with some kind of collaboration. Like in Marfa, she says many Jeff Davis County residents would likely be “more comfortable talking to somebody from Marfa than El Paso” when it comes to private medical questions.

By the end of the year, Todd hopes to see an agreement between Marfa and Presidio County allowing contact tracing in outlying neighborhoods like Sal Si Puedes. And while the program is currently funded by federal emergency funding, Todd hopes Marfa will keep the program going whether or not Congress signs a 2021 stimulus bill.

While Marfa’s contact tracing program is currently funded by federal coronavirus money, Todd thinks it’s working too well to abandon it if more emergency funds don’t arrive by January. “If we keep [the program] afloat for six months, hopefully we’ll get reinforcements,” she said.