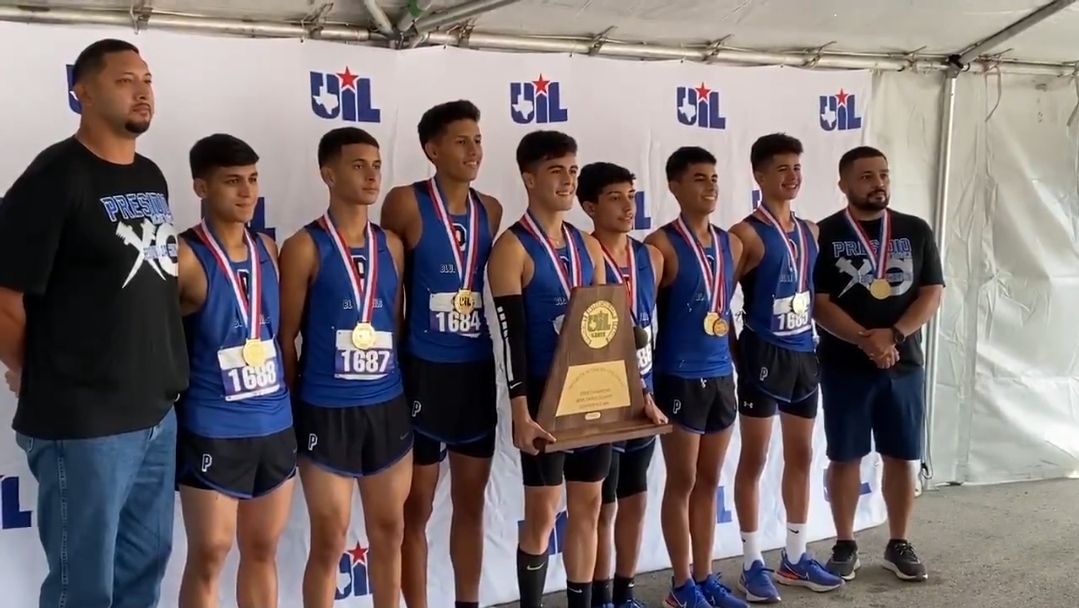 In individual results, star runner Marco Rey, a senior, came in first, with a time of around 15:52. Senior Emilio Rios was close behind him, with a time around 16:05 and an overall place in third.

Those results helped deliver the Presidio team a first place team win, and also earned Rey and Rios a place in the Cross Country Coaches Association All-State team. Eduardo “Eddie” Flores, a freshman with an overall place of tenth in Monday’s race, also won a spot on the team.

In an emailed statement, Coach Samaniego did not hold back in expressing his joy at the results. Winning the state championship was a “very surreal experience,” he wrote, and “words cannot describe how proud I am of these kids.”

“They showed up to practice every day and it was always business for them,” Samaneiego added. “I told them on day one to set their eyes on the state plaque” — advice the team followed, taking home the school’s first state gold.

Coaching this year was “very hard,” Samaniego said, due to “the uncertainties the pandemic has brought on.” But regardless, he said, “these boys put in the work day in and day out, and the results have shown.”

Along with Rey, Rios and Flores, the team was rounded out by Alejandro Porras, Esteban Morales, Jose Fernandez and Edgar Galindo, and coached by Samaniego and Coach Robert Romero.

Samaniego reserved special accolades for the senior runners, who he said were “exemplary role models” who “set the tone” during practices.

“I hope the lessons we taught them will help them in the next chapter in their lives,” he added. “I also want to thank them for inspiring me to be a better coach, and for all the hard work they put in every day. We wish y’all the best, and you will be missed.”