Explosive COVID, tourism and the future of testing in the Big Bend 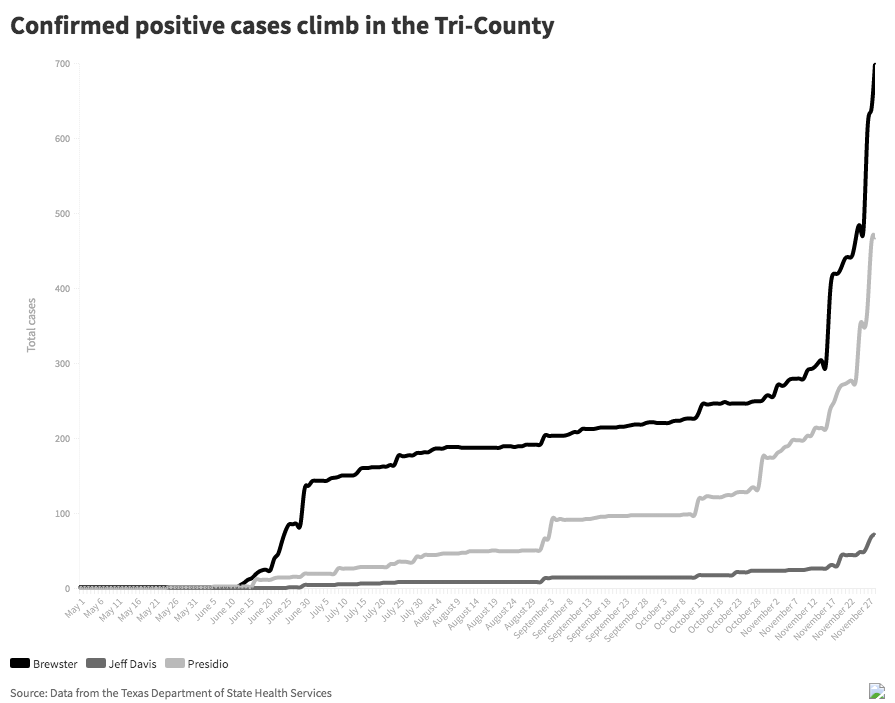 A graphic showing the dramatic spike in local cases over the last week, which placed both Presidio and Brewster counties among the worst-hit counties in America. Graphic by Abbie Perrault, data from the Texas Department of State Health Services
Subscribe

Even before the holiday, the final round of military-run testing sites revealed the county’s highest spike in coronavirus cases yet. But nailing down the cause of the current explosive spread is neither simple nor easy.

Over the weekend, some officials and residents in the Big Bend region were stunned to learn Presidio County ranked third highest in the country for recent coronavirus cases per capita, according to data tracked by the New York Times. Brewster County was right behind, coming in fourth among every county in the United States. In the past week alone, Presidio County saw 185 cases added, Brewster County saw 239 new cases, and Marfa recorded its first COVID-19 death.

Dr. Schwartz was less surprised. The winter spike he had predicted was coming to pass. The increase in coronavirus cases has “gone up exponentially, and it’s going to continue,” he explained this week. Attempting to put the large numbers in perspective, he said, “When you realize every time you pass 20 strangers on the street, one [on average] has COVID, that hits home a little more.”

Meanwhile, some residents are increasingly concerned that tourism in the area is exacerbating the spread of the disease, as the area has continued to rely on visitors to buoy its economy. Signs posted around town this week offered cutting words to visitors, sending messages like “tourism kills,” “everyone here hates you,” and “This town chooses your dollars over the safety of the people that live here. So make sure you get a tote bag.”

But through tracing efforts at the city level, Don Culbertson, a contact tracer for the city of Marfa and a physician assistant at the Marfa Clinic, said he has “no proof” that tourism is a big contributor to the COVID spreading through the region.

“It’s easy to vilify tourists and say people walking around town are spreaders and that’s the problem, but I don’t have any proof of that,” Culbertson said in an interview Wednesday. “We all have judgement about seeing people here during our pandemic. But, I don’t know.”

County Judge Cinderela Guevara also cast doubt on the role of tourism in the explosion of COVID cases in the area. “In the whole eight months of coronavirus, I’ve never heard anyone say, ‘I know I got that case from visitors that came here,’” she said. “I’m not saying it doesn’t exist or that it hasn’t happened, but I’ve just never heard of it.”

Instead of tourists, Culbertson turned his attention to another culprit. “I think a lot of our transmission is happening between each other,” Culbertson said. “We don’t mix with tourists that much, and we live in multigenerational communities.” While it’s true that a young person could bring home the virus from their service industry job and infect a grandparent, he said, more transmission is likely occurring from locals making trips to the larger surrounding cities and bringing it back home.

Judge Guevara believes the spread is the result of a small proportion of COVID-positive individuals who aren’t taking proper precautions. “When I see the list [of new cases], I’m like, I just saw this person last night at Stripes,” the judge said. “I’m fearful for people because I think I just see too many people not taking it seriously.”

Still, Culbertson did not entirely write off the possibility of locals getting COVID-19 from tourists. Recently though, he’s traced some cases where it’s possible tourists have contracted COVID-19 from locals during their Marfa stays. “I’ve walked down the street in Marfa and gone into the super-crowded shops in Marfa just to observe. I’ve seen a high concentration of people, and I don’t recognize them,” he said. The tourists are here, and the mixing of people is not healthy, he said. “We’ve already been told by CDC and experts that moving around and mixing in hotels and restaurants isn’t good for us.”

Tracing has become a key role in understanding local COVID spread, but much of it relies on individuals getting tested and finding out their test is positive.

While larger cities in Texas are able to rely on a wide variety of testing options at hospitals, minute clinics, doctors offices, local government-run testing and more, Big Bend residents have so far gotten the majority of their COVID tests taken at state-run mobile clinics where military testing teams popped up day-long events and tested any individual who wanted to be, regardless of symptoms or insurance status, and all at zero cost to the patient.

In an email to EMCs and county judges, TDEM District Coordinator Al Talavera informed officials that a private vendor, Curative, Inc., would be releasing a fleet of mobile testing vans and that “a couple” of those could be secured for the region. “The catch,” Talavera wrote, is that “these vans will not be State sponsored sites, the agreement will be between Curative and the local jurisdiction.”

The vans will be “insurance based” testing that will set up at a location determined by local officials. Citizens will walk up to the location and get a mouth swab test. If the individual has insurance, the insurance will be charged. If they do not, the test “will be paid out of a national fund,” Talavera explained.

“Regardless,” he wrote, there would be “no out of pocket cost to the individual.” The coordinator urged tri-county officials to coordinate dates together so that the vans would be able to move through Brewster, Presidio and Jeff Davis counties in one window of time.

Curative did not respond to requests for comment on their role or timeline in potentially bringing testing vans to West Texas, but Talavera concluded his message by writing that the vans can set up “for a day, a few days, or as long as the jurisdiction needs them,” at least until “federal funding goes away.”

While Mitschke was glad to learn of new testing coming to the area, he doubted whether the testing vans would be capable of meeting the same capacity as the military operations, which were able to test over 1,000 Presidio County residents in two days on their last local stop.

On Wednesday, TDEM told Courthouse News reporter Travis Bubenik that new mobile COVID testing would be deployed to rural West Texas next week, adding, “Nobody should see a change in the effectiveness of how the operation runs.”

As Presidio and Brewster counties remain some of the hottest spots in the county at press time, Schwartz said that if it was up to local governments, “they would be calling another lockdown to try to shut down the spread.” As it stands though, local officials’ hands are tied by the governor’s orders, which limit local officials from enforcing anything stricter than what the governor has mandated.

Schwartz called the governor’s rules, like 50% capacity at establishments, “the most meaningless gesture. You can see it’s gotten us where we are now.”

In neighboring El Paso County, Judge Ricardo Samaniego tried to fly in the face of the state and institute a lockdown. But he was met with hostility, threats of a lawsuit and personal attacks from Attorney General Ken Paxton, who put out a news release calling Samaniego a “tyrant.”

Perhaps with that in mind, on Monday, Judge Guevara issued a press release that explained, “Presidio County is rated #1 in Texas for having the most cases per capita in the state” and that the increase “represents a +1094% change over a 14-day period.” But rather than mandating new restrictions, which she has limited power to do, Guevara instead said county officials were “encouraging all residents to shelter in place as much as possible and to avoid all non-essential travel.”

Speaking on the drastic rise of cases in the Big Bend in a phone interview this week, Guevara pleaded directly to residents. “It’s really scary,” she said, “and this is the time to bear down and be patient. We’re all tired of it and all frustrated with it, but at the same time, we just have to fight, especially for the ones that we love.”