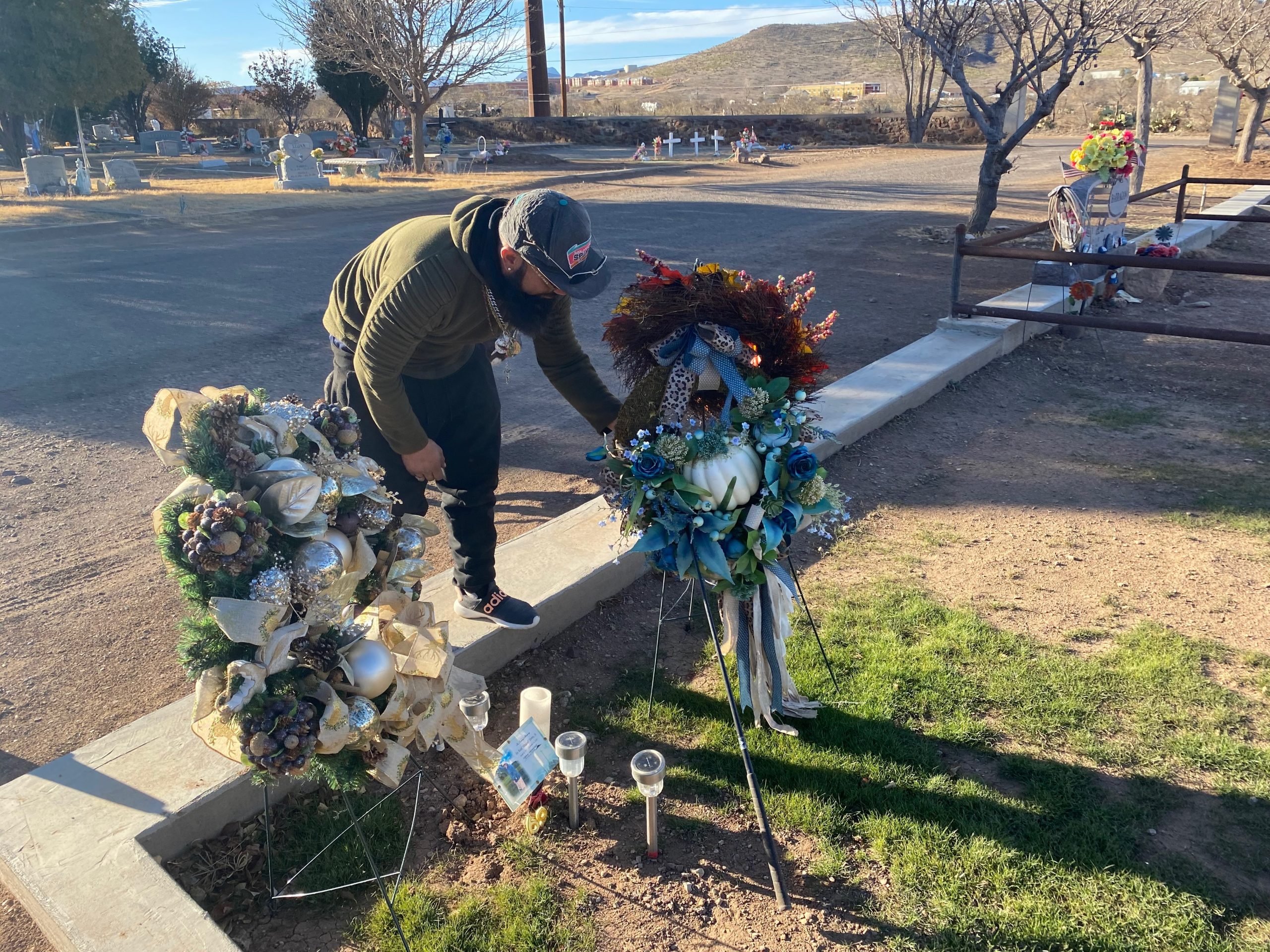 Victor Torres at the grave of his father Joe “Magoo” Torres during a visit to Holy Angels Cemetery last week. Victor has been visiting every day, he said, “just to talk to him” and “thank him for everything he’s done for me.” Photo by Stephen Paulsen
Subscribe

TRI-COUNTY — He was a pillar of the Alpine community, a master phone-line repairman, a bail bondsman so generous that he often lost money on clients — but to four boys growing up in Alpine in the 1970s and ‘80s, Joe “Magoo” Torres was just dad. “His favorite hobby was his family,” said his son Joe “Jo-Jo” Torres, “and of course my mom was the best friend he ever had.” Magoo was close to his father Horacio, and when the boys were young they would pile into the back of Horacio’s baby blue pickup for a drive down to Lajitas. They foraged for cactus fruits and fished in the Rio Grande. “We were as tight as could be,” Jo-Jo said: “A woven family.”

Magoo was a hard worker, and as his boys got older, the family moved from a one-room trailer to a three-room trailer and finally to a brick home on the west side of Alpine. Eventually his sons had children of their own, and Magoo grew close to them too. He took them across the state to visit amusement parks. He took his grandson Zane, who lived in Beaumont, to see Galveston Island.

When Magoo retired from Southwestern Bell/AT&T in the early 2000s, he stayed busy, throwing himself into other projects. He opened Magoo’s Place, a casual Tex-Mex eatery with his wife Marta. He started a bail bonds company, helping criminal defendants get back on their feet and making sure they made it to court.

“I wouldn’t say he was a star, because he was so humble,” Jo-Jo reflected in a phone call last week from Odessa. “He let his work speak for itself. He never bragged and boasted about anything.”

In late September, after around a month of illness, Magoo died of COVID. It was the fifth COVID death in Brewster County, the 12th in the tri-county and roughly the 203,000th in the United States. Around 100,000 more Americans have died of coronavirus since then, including at least eight more Big Bend residents.

As temperatures drop and Christmas approaches, experts warn the pandemic could get even worse as people travel across the country to see family and gather inside for celebrations. But for some families in the region, the struggle is different, as they head towards Christmas with a family member missing. “One of the closest connections we had every year was when we had Christmas,” Presidio native Vicky Carrasco said of her big brother Elias, whom she lost last week. “If he wasn’t there, it just felt like we were waiting for someone.” 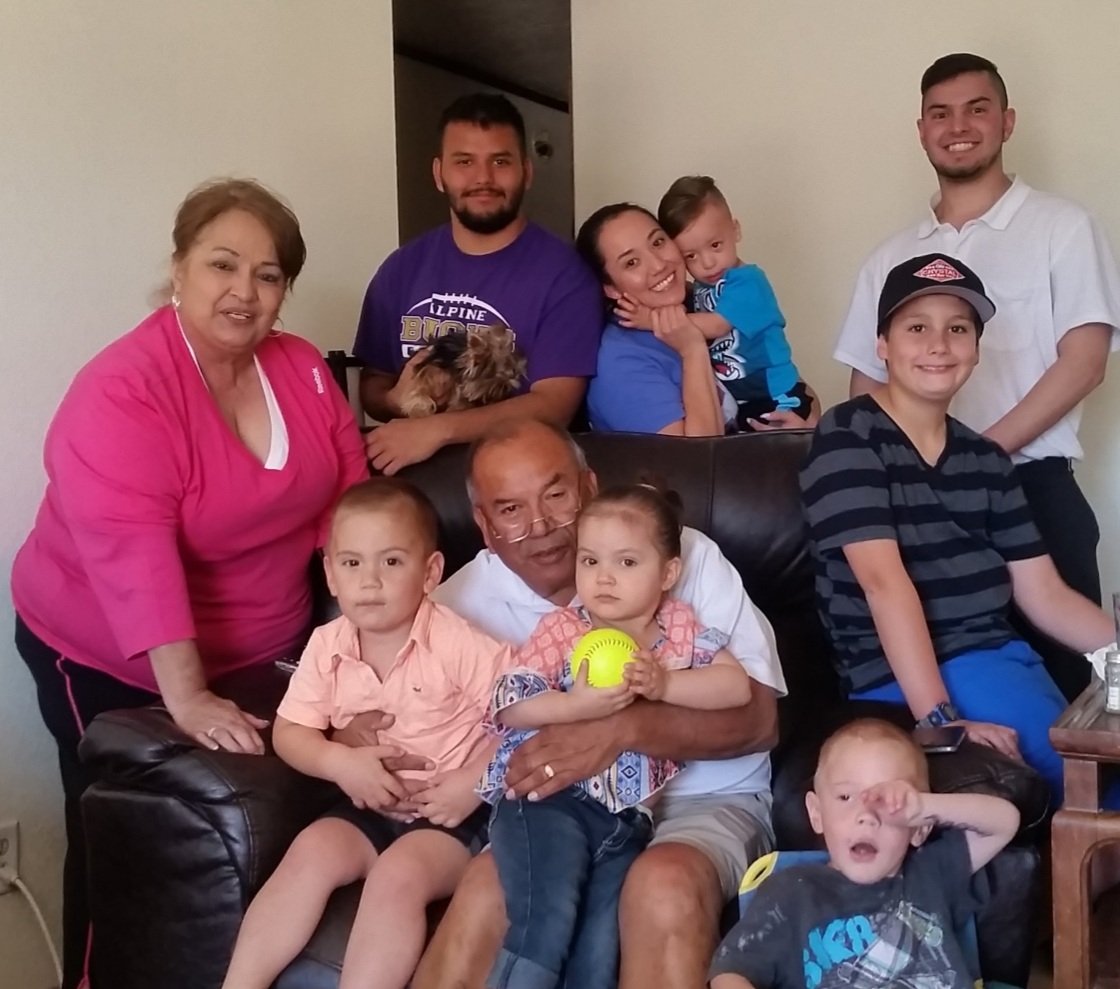 Even after Magoo was hospitalized, he kept up with his work, Jo-Jo said. “He was literally working until the moment he was intubated,” he said. “Calling clients, texting clients, making sure they were on their court cases.”

Magoo was 69 and had diabetes — factors that some might use to excuse or explain away his death. But his family said he was full of life. His death certificate listed COVID as the primary cause of death.

In a heartfelt media post in October, Magoo’s daughter-in-law Daniela Martinez reflected on what Magoo had meant to her son Zane, his grandson.

“Man what a team they were,” she wrote. “I’ve never hurt so much in my life, seeing him in more pain than he’s ever known. Pain that I can’t heal. Pain that can’t be ‘fixed.’”

Magoo’s son Victor, a veteran, still lives in a trailer at his family’s home. “One of the reasons he moved my trailer here,” Victor explained, “is because he always wanted to know I was okay and what I was doing.”

Victor sat outside his trailer one afternoon last weekend. Tears broke through his tough demeanor.

In Alpine, the city issued a proclamation in October declaring a “Joe ‘Magoo’ Torres week.” The city did so, Mayor Andy Ramos explained in the document, because Magoo served in several public roles, had a “profound impact” on Alpine residents and “always demonstrated compassion and concern for all members of the community.”

In a statement to The Big Bend Sentinel, Judge Roy Ferguson called Magoo a “good human being” and an “irreplaceable part of the Big Bend criminal justice system.”

“I was lucky to be his friend,” Ferguson added. “He is truly missed and will never be forgotten.”

James McDermott, a public defender in Alpine, broke down as he explained why Magoo was loved in the local courts system. Magoo was a bail bondsman — a job that involves billing people accused of crimes in exchange for their freedom. It doesn’t always attract the most caring of souls.

Magoo was an exception, McDermott said. He extended lines of credit to defendants — an act of generosity that’s virtually unheard of in the industry. He fed and clothed his clients, found them hotel rooms and made sure they made it to court. “He was the best bondsperson that I’ve worked with in the entire state.”

Joe Greer Denham III, a funeral director at Alpine Funeral Home, said he’s handled several funerals for local COVID victims. Alpine was having around 30% more funerals. In Van Horn, where he also works, they’re up around 50%. Those include not only COVID deaths but normal deaths from despair, which typically spike during the holiday season.

COVID funerals could be harder, Denham said, because families didn’t get to touch their loved ones. But at least they got to see them. “They come in and you see this relief on their faces,” he said.

Asked what advice he had for the families of COVID victims, Denham sighed. He took a long pause.

“During the grieving process, they need to reach out to family, friends and whatever higher being they believe in,” he said. “If they just close themselves off and retreat inward, while they think that might help them, it won’t.”

Growing up in Presidio, Vicky Carrasco viewed her older brother Elias almost like a father. He was 22 years older than her. When their father died, he helped the family take care of their mother. He tended to the family ranch in Mexico, caring for goats, building paths and exploring the mountains.

Last week, Carrasco got a frantic call from her relatives in Odessa. Elias, 62, was “really sick.” He was taken to the hospital in an ambulance and died later that night.

“It was very quick,” Vicky said. “It was a complete shock to all of us.”

Elias died of a heart attack, but with morgues facing shortages and backlogs, the Carrascos haven’t yet received a death certificate that could confirm whether Elias died of COVID. They know he was around people who later tested positive for coronavirus, after both his son Elias Jr. and a coworker got sick. At press time, Elias Jr. was in the same hospital.

The family stressed that the sudden death of a loved one — not the specifics of how he died — is what matters most right now. They urged residents to continue taking coronavirus precautions, especially during the grieving process when family members might be tempted to get together. 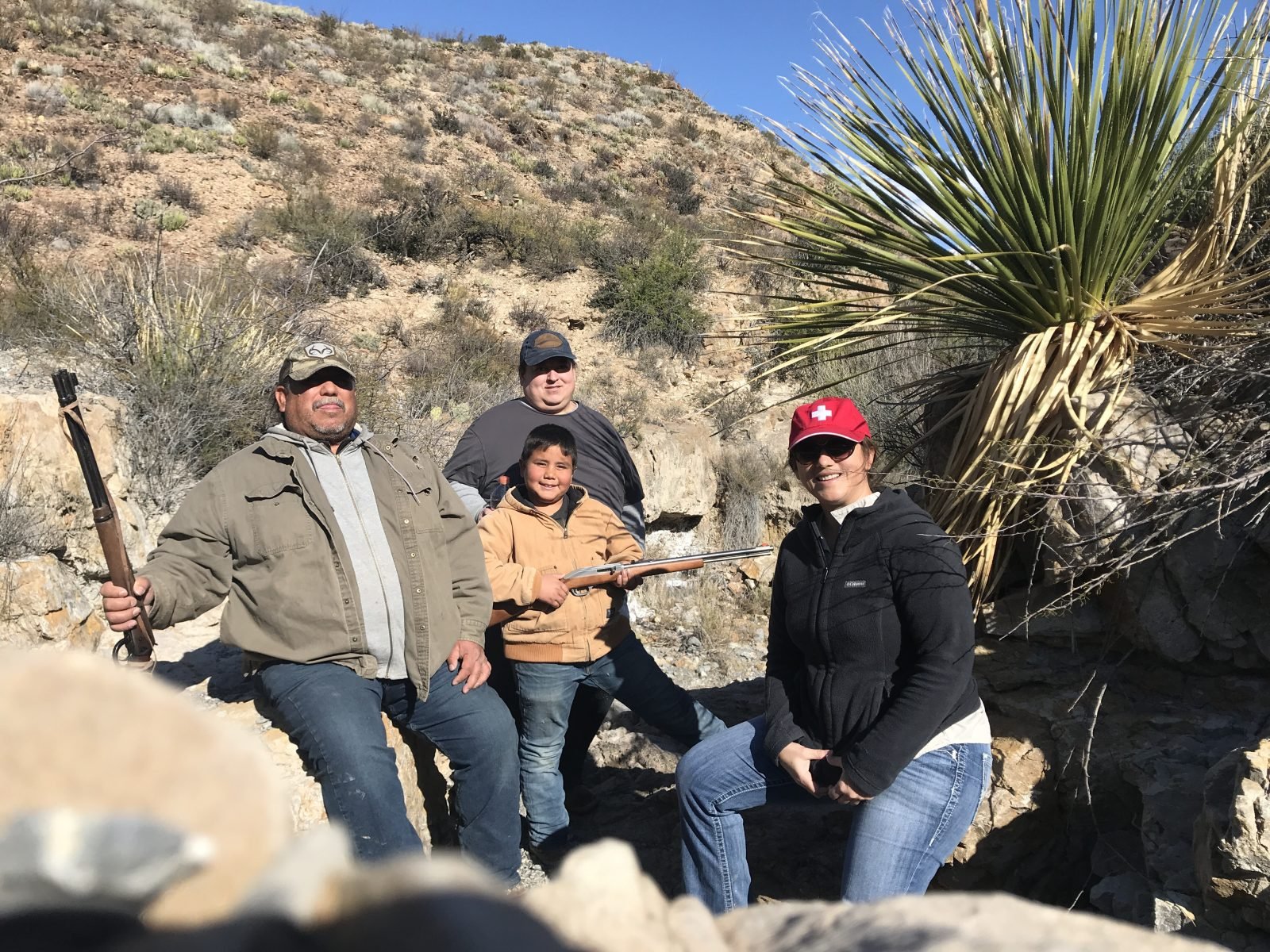 When Elias was younger, he worked at the family ranch in Mexico. Later, he owned and managed it. It was his passion in life, Vicky said, exploring and caring for the land. He avoided plants he thought were beautiful when he cleared new paths.

“Those are the things we’ve lost now,” she said.

A few years ago, the family got together at the ranch. Elias told them about a place called Pancho Villa Canyon. Vicky hadn’t heard of it before.

They drove into the mountains. They hiked along a narrow cliff trail. “It was very scary for me, but I thought, ‘If he’s doing it, I better do it,’” Vicky said. “That’s always how it was.” When they reached their destination, Vicky was stunned. It was beautiful, a landscape of swimming holes with creeks flowing between them.

In Odessa, Magoo spent 17 days in the hospital before he died. When the doctors decided to intubate him, Jo-Jo thinks his father knew his time was up.

“Some of his last words were, ‘That’s it. I’m done Jack,’” Jo-Jo said. The family sent him encouraging messages through safety glass. On the day before he died, Jo-Jo suited up in protective gear and spent the day in his father’s room, holding his hand. Workers finally kicked him out. Jo-Jo spent the night awake in the parking garage, watching his father through the big glass hospital windows.

A little after 4 a.m., Jo-Jo drifted to sleep. He thought he woke to feel a tug on his shirt. “When I looked, my dad was sitting right beside me,” he recalled. “He said, ‘Take me home, son.’ He said, ‘Hurry up and take me home before they come and get me again.’”

“My father taught me everything,” he recalled, his voice breaking. “He taught me how to love, how to be a good father, how to be a charitable person. But the one thing he never taught me was how to cry. I learned that the day he passed away.” 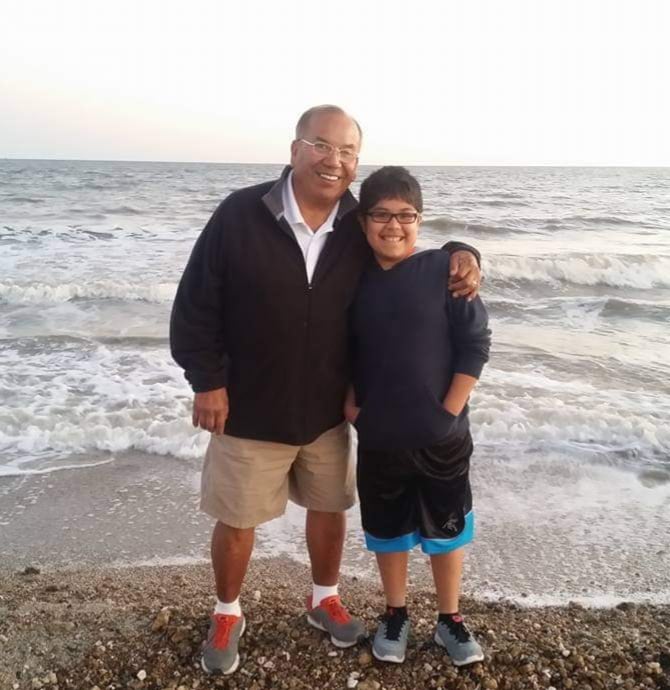 Magoo, left, with his grandson and “partner in crime” Zane during a visit to the ocean. Photo courtesy of Joe Torres

Magoo loved golf, gambling and fishing. He loved bologna sandwiches with jalapeños, which only his wife Marta could make right. He was known for his “Magoo-isms,” which were his tics, malapropisms and unique turns of phrase.

Sometimes, advice was couched in metaphors about golf. “If you don’t get the ball to the hole, it’ll never go in,” Jo-Jo recalled. “It doesn’t matter how you play, so long as you look good.” Victor, another son, thought of Magoo-isms as specific actions that made his father who he was. Like the way he would bounce his leg instinctively, or how he’d fall asleep suddenly in those moments where he finally allowed himself a break from work.

The rebel of the family, Victor has drifted apart from some of his relatives as he’s gotten older. But he was close to his father until the end, he said. Magoo hated Victor’s rap music, but he’d still sit front row when Victor had a show.

“Victor was the favorite,” Jo-Jo said. “There’s no ifs, ands or buts about it.”

“He did a damn good job taking care of us boys,” Victor said. “There ain’t no amount of money that could buy the knowledge he’s given me.” He remembered how worried his father was when he joined the military, and how his father brought him to the airport to say goodbye. “My dad’s always been — for lack of a better term — the mother hen,” he explained. As the plane rose that day, Victor could see his father standing there until he was just a speck on the ground.

On a recent afternoon, Victor went to visit his father’s grave with his dog Lucious. He’s been visiting every day, he said, “just to talk to him” and “thank him for everything he’s done for me.” He pulled into the Holy Angels Cemetery and stopped at a small plaque. He set up a speaker. He got a bag of golf balls from his car, and he cut free a golf driver he’d zip-tied to a wreath by the grave.

Victor put on one of his dad’s favorites, “El Coco Rayado” by Ruben Vela. He whacked the golf balls, sending them flying off towards the Del Norte and Glass mountains. “He was 69,” Victor said. “I thought he was going to live to be 140. I thought he had at least 20 years left in him.”