Health workers get a dose of the Big Bend’s newest tool to fight COVID-19: the Moderna vaccine 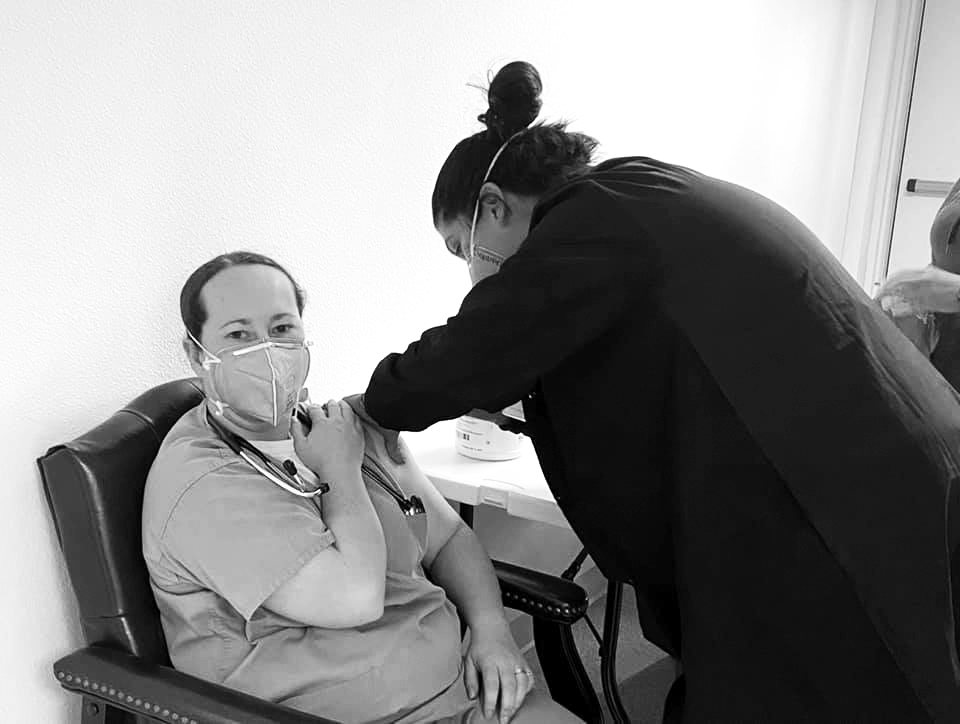 TRI-COUNTY — In the waning days of 2020, Big Bend medical workers mounted their latest defense against the novel coronavirus. Immunizations, in the form of the recently approved Moderna vaccines, arrived to Preventative Care Health Services on December 23. It was Christmas Eve when the first few workers in the Big Bend received their shots, given to those high-risk frontline workers who would be involved in vaccinating others.

By the end of this week, the 400 doses allocated to Preventative Care Health Services in Alpine are likely to be completely used up, according to PCHS CEO Linda Molinar. But more is already on the way.

Those keeping up with the COVID-19 vaccine allocations across the state of Texas might have noticed Presidio, Brewster or Jeff Davis counties didn’t make the list for “week 1” of vaccine distribution. That initial push of doses in Texas at the end of December was drugmaker Pfizer’s vaccine, the first drug approved as a vaccine against the viral pandemic that dominated the year 2020.

But Pfizer’s drug is not well-suited for smaller, rural counties with fewer resources. According to a DSHS representative who spoke with The Big Bend Sentinel last month, that drug ships in batches of around 1,000 and needs to be stored at nearly 100 degrees below 0 Fahrenheit to be effective.

Local facilities weren’t prepared to keep a product that cold. Nor did they have 1,000 eligible recipients lined up that qualified under phase 1A, even when adding together all the tri-county’s frontline hospital workers, long-term care providers and residents, EMS 9-1-1, home health, outpatient, ER, pharmacies, last responders and school nurses – those the state has determined to be a part of the first wave of vaccinations.

It was week 2 of vaccine distribution when the tri-county got its first mention: 400 doses of Moderna’s vaccine were headed to Alpine, intended to be shared with 1A eligible recipients through the tri-county.

Following the handful of Christmas Eve vaccinations, appointments began for local healthcare workers on December 28, and PCHS Doctor Taylor McCain was eager to get hers. “Vaccine production speed has been amazing,” McCain remarked in an email earlier this week. “Healthcare workers have pulled together in unprecedented ways across the country.”

But those strides didn’t mitigate many effects of COVID-19 to our communities. “All that professional pride and excitement has been tempered with heavy doses of disappointment and frustration and grief,” McCain wrote. “Policies haven’t matched the science. Outbreaks have continued to ravage our population and the death toll has been extreme.”

Because of that, McCain was “thrilled” to be a part of the first group, saying she got the new vaccine for the community, her patients and “in memory of those who didn’t make it to the day vaccines became available,” among other reasons. In a post on social media she wrote it was partly “because I believe it’s safe and I want you to know I believe that enough to go first.”

Meanwhile across Texas, data pushed officials to act more aggressively in using up their vaccine doses. A software called ImmTrac2 showed that while Texas had allocated over one million vaccines, only a tiny fraction had been injected into Texans’ arms.

Officials feared vaccines might expire on the shelves, so during week 2, as PCHS took its first steps to immunize the area, commissioner of the Texas Department of State Health Services Dr. John Hellerstedt authorized Phase 1B participants (anyone over 65, plus those over 16 with at least one chronic medical condition, including pregnancy,) to start getting vaccinated where available too.

But Molinar said they weren’t quite ready to vaccinate 1B. Instead, they encouraged those over 65 and those with chronic medical conditions to contact their physician’s office to get on a list to be notified when the vaccine becomes available. “All primary care providers should be amassing a list of their patients that qualify and will be contacting them when available,” said Dr. McCain, who said the area is getting closer to moving into phase 1B.

Week 4 distributions were announced on Monday, and while Brewster and Jeff Davis counties weren’t mentioned, the state announced Presidio County Medical Clinic in the city of Presidio will now receive 100 doses of Moderna.

On Tuesday, all 400 doses had not yet been administered, but Molinar hoped to by the end of the week. PCHS was staggering its injection appointments for the various agencies and offices, which Molinar said was in part because the vaccine is new. They didn’t want to accidentally knock out every EMS responder with an unknown side effect and cripple medical response in some way.

But their worries so far have not come to bear, even as all recipients have the ability to report any effects. “I just got it yesterday – I didn’t feel anything!” said Molinar. “Today my arm is just sore,” the PCHS CEO mentioned. McCain agreed with the sore arm sentiment, writing in an email, “Think tetanus vaccine sore.” She’s back to work on the frontlines and already preparing to help her patients get their shots when they become available.

“Phase 1B is high risk individuals. You’re up next. So ASK us ALL the questions,” McCain wrote, urging the community to talk to their doctors about risks versus benefits of the vaccine. “We want you to feel as comfortable with this as we do.”