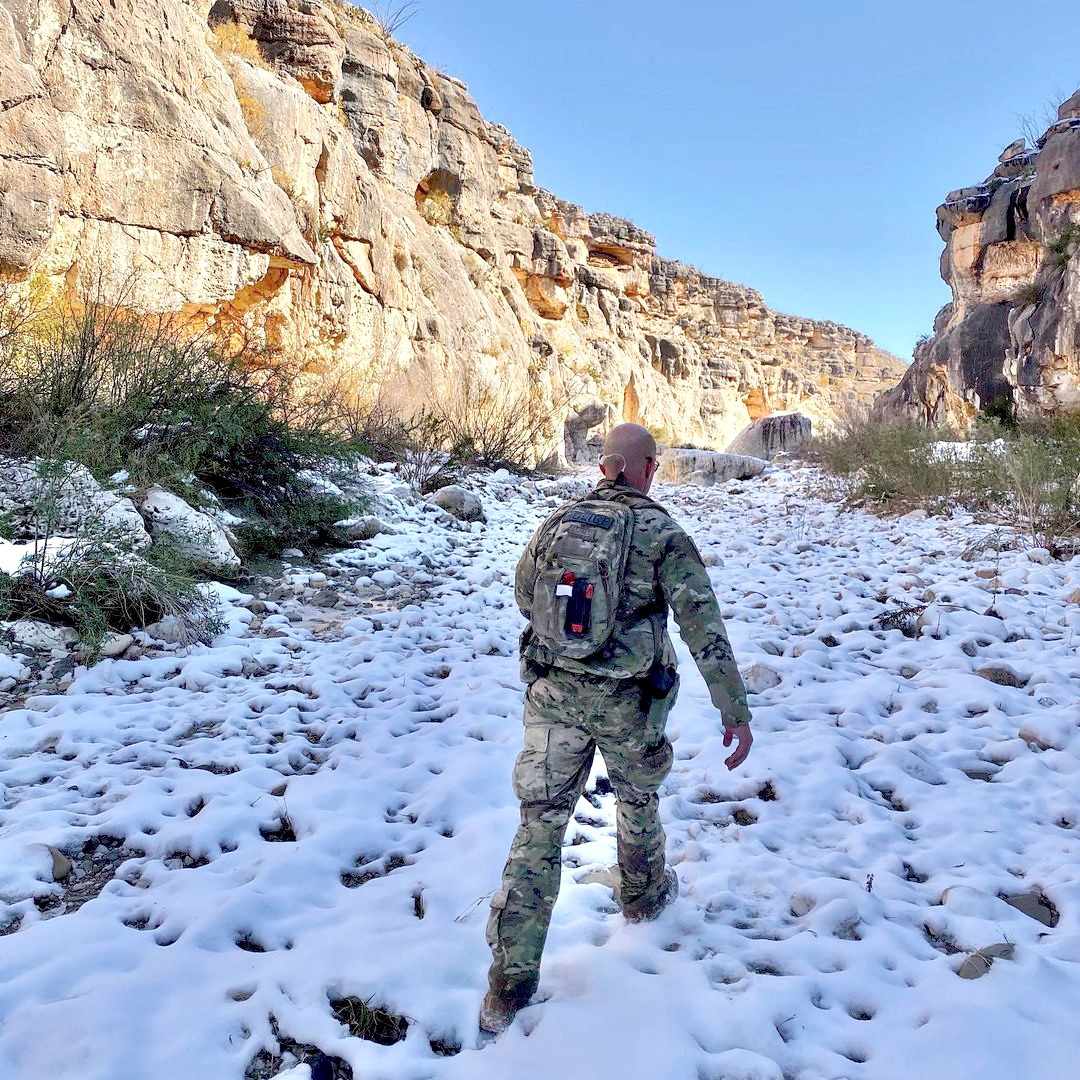 A Border Patrol agent patrols the rugged terrain near Sanderson, where two migrants perished and 65 were rescued during a freak winter storm last week. Photo courtesy of Customs and Border Protection
Subscribe

TRI-COUNTY — The Big Bend region in a typical year might get one or two light snowfalls a year. But in a fitting end to 2020, the region saw huge amounts of snow and dangerous conditions during a two-day winter storm last week, stranding residents and visitors alike and grinding ordinary life to a halt.

Across the Big Bend, law enforcement reported dozens of rescues of stuck or stranded motorists. There were also around a dozen crashes, as drivers slid off the road or into other cars.

Meanwhile, tragedy struck near Sanderson as Border Patrol recovered the bodies of two migrants who were attempting to cross through rugged terrain when the snowstorm hit. At least 65 more migrants were rescued, according to a statement on social media by Customs and Border Protection.

The storm — which lasted from last Wednesday through Thursday — dropped snow erratically across the tri-county. A foot of snow fell in Alpine, compared to an all-time record of 19 inches in 1946. Around a foot of snow also landed at Big Bend National Park, with maybe as high as two feet of snow in places high in the Chisos Mountains, said park spokesperson Tom Vandenberg.

Elsewhere in the tri-county, snowfall wasn’t as heavy: Marfa saw three inches of snow, while Presidio saw just less than an inch. Still, the dangerous conditions prompted closures of major roads in the region, including parts of I-10, U.S. 90, U.S. 67 and U.S. 118.

The poor conditions caught some drivers off guard. Abel Gomez was driving from New Mexico to San Antonio when, due to icy roads and thick snow, he started to fear for the safety of his family. “There was a moment or two when I started to think that we would swerve,” he said. “I knew we had to get off the roads.”

Hoping to make the full trip back home to San Antonio, Gomez instead found himself stranded in Marfa with nowhere to stay. He ultimately took shelter at Marfa Catholic Church, where he slept on the stage with his family on a makeshift mattress.

As conditions improved on Friday, and road workers successfully cleared state highways, some locals drove around the region to take in the dazzling sight: a normally parched Chihuahuan Desert landscape, covered in thick ice and snow.

But for others — and especially for people just trying to get through the region by car and on-foot last week — the scene was hardly a winter wonderland.

At press time, Customs and Border Protection had not yet provided more information on the stranded migrants, including on the identities and nationalities of the two deceased migrants and how many groups of migrants in total were rescued. Greg Davis, an agency spokesperson, said the undocumented migrants were “abandoned by smugglers” and that some had called the agency for help.

As snow continued to fall on Wednesday, road crews scrambled to triage. Roads into and out of basically all of the region’s towns and cities — including Marfa, Presidio, Alpine, Fort Davis and Valentine — were closed. The stretch of U.S. 90 between Alpine and Marfa, which Brewster County Sheriff Ronny Dodson said had the worst impacts in Brewster County, saw near white-out conditions.

In a social media post that day, the Brewster County Sheriff’s Office also said that Big Hill, a major section of Highway 118 south of Alpine, should be “considered impassable,” with “a number of vehicles at a standstill.” The Presidio County Sheriff’s Office issued similar advisories on U.S. 67, and the road was eventually closed from Wednesday evening until midday Thursday.

At Big Bend National Park, officials said that people should “not attempt to enter the park.” As a sign of how bad road conditions were during parts of the storm, even Interstate 10 — one of the busiest roadways in America — was closed for part of Wednesday afternoon after bad visibility and icy conditions caused a collision.

Making the situation worse, the tri-county was packed with visitors during the storm, as tourists from big cities like Houston and Dallas took vacations, and other drivers tried to make it home after Christmas to places like Ojinaga and Midland/Odessa.

Dozens of drivers were left stranded in Marfa and looking for rooms — but at that point, some hotels like Thunderbird were already booked at capacity, said Thunderbird manager Jose Prat.

“Our property manager had 75 calls that night,” Prat said of stranded tourists who called in Wednesday, frantically looking for rooms. “It was a big mess.”

Marfa ISD Superintendent Oscar Aguero, along with other school officials, greeted unlucky travelers with snacks, water and hot chocolate, as locals within the Marfa community dropped off donations to assist the stranded visitors. Around 50 people ended up spending the night.

Some travelers didn’t want to stay in Marfa schools for fear of spreading coronavirus, instead sleeping in their cars in places like the Stripes parking lot. Marfa police spent the night checking in on people and offering them help if needed. “There was a lot of travel going on,” said Police Chief Steve Marquez. “We were kind of surprised.”

In total, Marquez estimates local dispatchers received around 50 to 100 calls regarding motorists stuck in Marfa. He also started receiving messages on Facebook, as travelers turned to social media for help.

In the morning, as drivers started lining up to go south on U.S. 67, arguments broke out as people tried to cut in line or hold places for family members. Police responded in an effort to cool tensions.

“I advised them, ‘You’re all heading to the same place,’” Marquez said. “‘Everyone’s in the same predicament, and you need to be patient with each other.’”

Despite chaos in Marfa on Wednesday, the city only saw one traffic accident. A woman slid off the road near El Cosmico, hitting a tree.

“She was shook up,” Marquez said, but emergency workers “gave her medical clearance.” She was taken to Big Bend Regional Medical Center.

Otherwise, there were no apparent emergencies on county roads. On U.S. 67, “there was a lot of snow, and the road conditions were really bad,” said Presidio County Emergency Management Coordinator Gary Mitschke, “but nothing that required the fire department to come and do any rescuing.”

Still, Mitschke said, there were likely more incidents — including stranded drivers — which didn’t require medical attention and therefore didn’t prompt an EMS call. The Presidio County Sheriff’s Office did not respond to requests for comment.

The situation was similar in Alpine. At one point, the city opened its civic center in case stranded drivers needed a place to stay, said Alpine Police Chief Robert Martin. But “nobody reached out,” he said. There were also six motorist assists, as people got stuck in the snow or veered off the road.

Only one crash in Alpine was linked to the storm, after “a drunk individual” early on Thursday morning crashed into an Alpine squad car near the old Stage store. That driver was arrested for driving while intoxicated, said Police Captain Darrell Losoya.

The situation was worse heading out of town. “At one point in time, we had all directions [out of Alpine] unusable,” said Brewster County Sheriff Ronny Dodson. “Our great friends at TxDOT came out and worked their butts off.”

All told, he said, there were around eight to 10 accidents, with no serious injuries or fatalities he said. Meanwhile, he said the office handled about 40 car rescues.

“They were all over the place,” Dodson said of stranded drivers. “Almost every road had some.” Tourists were getting stuck on Big Hill south of Alpine, especially after several RVs tried to U-turn on the “treacherous” pass.

Further north, the Davis Mountains were being pummeled by snow. Some drivers got stuck near Kent, especially after I-10 closed for part of the day, said Jeff Davis County Sheriff Bill Kitts. He and his deputies advised drivers not to attempt the trip south to Fort Davis.

The office responded to two accidents. In one, near Valentine, a semi and a car clipped, causing the semi to slide out and block the road. “No one was hurt,” Kitts said, “but it did close the highway.”

In another accident north of Fort Davis, a car speeding near Wild Rose Pass lost control and flipped. It was the most serious car accident in the tri-county during the snowstorm, with a family of five in the car all transported to the hospital.

The oldest son “got cut up pretty bad from the glass and stuff,” Kitts said. Still, he said, “they were lucky that the injuries weren’t worse.”

Back at Big Bend National Park, workers helped out “lots” of stranded vehicles, spokesperson Tom Vandenberg said. The Chisos Lodge helped some people find rooms, but Vandenberg was happy to report there were no injuries or rescues of campers and hikers. “The temperature just dropped like crazy,” he said. “I guess folks were pretty prepared.”

Still, Vandenberg was struck by how much snow there was. The park typically gets one or two dustings a year, he said. This was a blizzard.

“You could stand at Panther Junction, and for 100 miles around and it was just snow,” he said. “It was amazing. I’ve never seen anything like that.”