COVID-19 vaccinations begin for those age 65+ 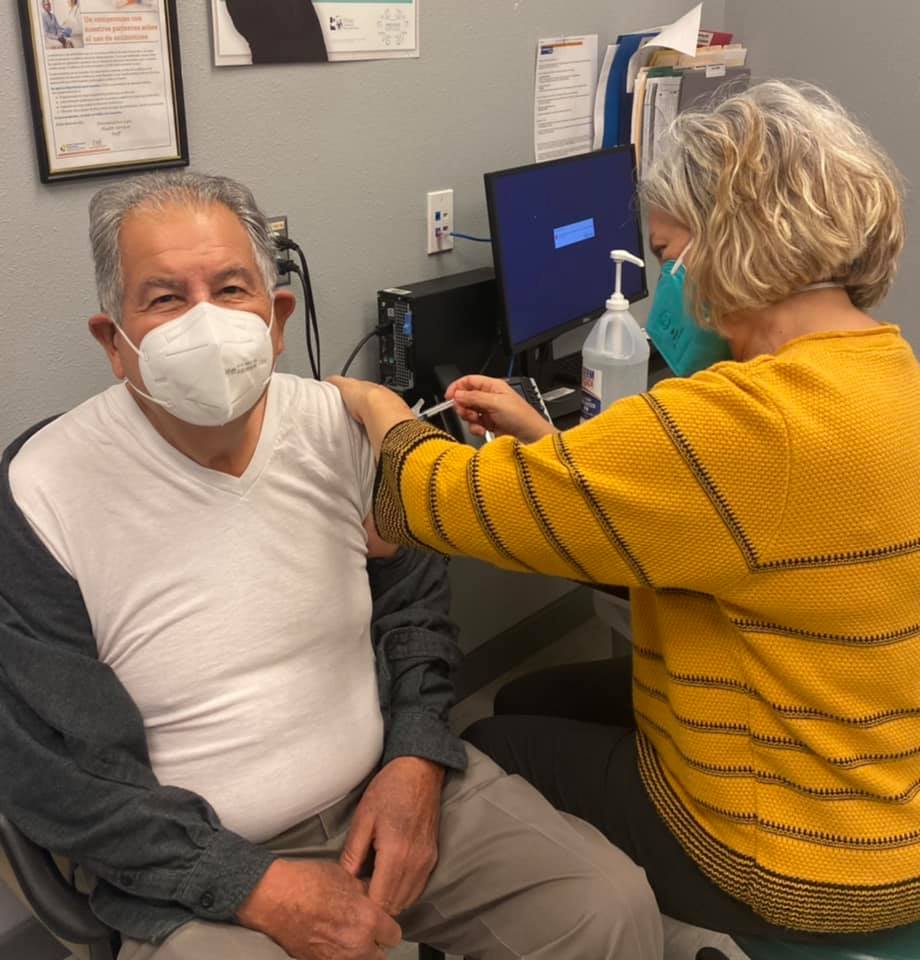 TRI-COUNTY — Vaccines against COVID-19 were injected into the arms of a new segment of the tri-county population beginning late last week. While previous allocations of Moderna’s vaccine were used to immunize frontline healthcare workers like doctors, nurses and EMS workers, new doses have finally become available to residents over the age of 65.

To get on a list to be notified when the vaccine is available from the Department of State Health Services, every tri-county resident is invited to visit this link: https://www.surveymonkey.com/r/LXX7S6V. Other local clinics will also maintain their own lists, as they also receive batches of the vaccine directly. Healthcare professionals are recommending those interested in getting the vaccine should contact their healthcare provider.

As the vaccines against COVID-19 have slowly rolled out across Texas, healthcare providers in the tri-county are beginning to receive small batches of the Moderna vaccine. This week, the Department of State Health Services office in Marfa received 100 doses, and 200 arrived at Big Bend Regional Health Center in Alpine, on top of the 500 doses already sent to Preventative Care Health Services.

No doses are to be held back, the state told providers. In the last weeks of 2020, the Pfizer vaccine and then the Moderna vaccine arrived in Texas. The state announced it expected to distribute 1.4 million doses to Texans before the end of the year. As the clock ticked to midnight of the new year, fewer than 250,000 had received their shot.

In a press conference on Monday, Texas Governor Greg Abbott urged providers to give away every dose they receive, rather than holding on to some vaccine doses to give as a second round shot. Both the Moderna and Pfizer vaccines require a second dose to reach their full efficacy, and providers had been saving them up.

This Tuesday, Linda Molinar, the CEO of PCHS (that has clinics in Marfa, Alpine and Presidio) stepped away briefly from a day-long vaccine clinic event to speak over the phone about their distribution of the vaccine. Her crew is able to give 20 to 25 vaccines per hour, and PCHS has given every good vaccine it has received, Molinar said. With its first 40 vials, the clinic was able to vaccinate 424 individuals – most of them frontline health workers – because some vials contained enough to supply an eleventh dose, rather than the expected 10 doses per vial.

When PCHS received their second batch, which had only 100 doses, the vaccines had suffered damage in transit, temporarily rising above the freezing cold temperature they needed. A device that ships with the doses indicated the batch was spoiled. The clinic contacted the state and the spoiled doses were replaced, arriving soon after and injected into Presidio patients on Tuesday.

PCHS began scheduling appointments for those 100 replacement doses last Thursday, and many phase 1B-eligible patients who have gotten the vaccine have simply been in the right place at the right time. Some were at routine appointments at PCHS and the doctor referred them for a shot, Molinar said. And in one instance, a man in his nineties arrived at PCHS to see if he could get on the list. “It seemed like one vial had 11,” Molinar said, so the clinic gave the extra dose from the vial to the man.

Molinar added that all eligible phase 1A workers had been offered the drug, and while some declined it, many who were hesitant at first ultimately chose to get the shot after seeing coworkers show little to no side effects, the most common being a sore arm.

Molinar said residents who want the shot can visit https://forms.gle/7St8oBAw1bgAdPhh9 to be placed on the waitlist, or call their hotline and leave a message to be put on the waitlist at 432-837-4843. All are welcome to get on the list, but vaccinations will be prioritized based on phases laid out in state guidelines.

“I think the message is to be patient,” she said. “All the agencies are trying their best. We know we’re under a crisis and these vaccines are needed. It’s just, they’re limited. We don’t have the supplies that we need.”

Governor Abbott told the press on Monday, “The only limitation we now face is the limitation of supply. The supply is not something the state of Texas is in control of. That supply comes from the federal government,” adding that the federal government is limited by the supplies Moderna and Pfizer are able to produce. Currently, Texas is slated to send out 310,000 first doses each week, and somewhere between 320,000 and 500,000 second doses, Abbott said.

This week, Operation Warp Speed, the federal entity tasked with distributing the anti-COVID drugs announced it would change its policies: no longer holding back second doses, and recommending vaccines be given to frontline health workers and those over 65, finally aligning with Texas’ policies.

At the beginning of this week, three-and-a-half weeks into vaccine distribution, the state has sent 1,580,400 doses to providers across Texas. As of Monday, 802,507 had been administered to Texans, and 83,538 of those were second doses.

Separately, Texas has provided 487,500 doses for nursing and long-term care centers, though even fewer of those have actually been used, with only 75,312 given by the beginning of the week.

“If we knew what the plan of the government would be, that’d be great,” Molinar said from the clinic in Presidio on Tuesday. For now, they are at the mercy of weekly announcements of vaccine allocations from the state’s health department, with limited time to book patients as vials begin arriving.

“Overall, there’s not enough supply,” Molinar said. “There’s a need and a big demand, and it’s very heartbreaking for me to see my patients come in and want a vaccine – and they need it – and I have to say no. It’s very hard.”

After warning, Texas continues use of Curative tests

Texas will keep using Curative's mouth-swab test, mirroring other officials who are balancing an FDA warning about false negatives against the company's otherwise good track record.