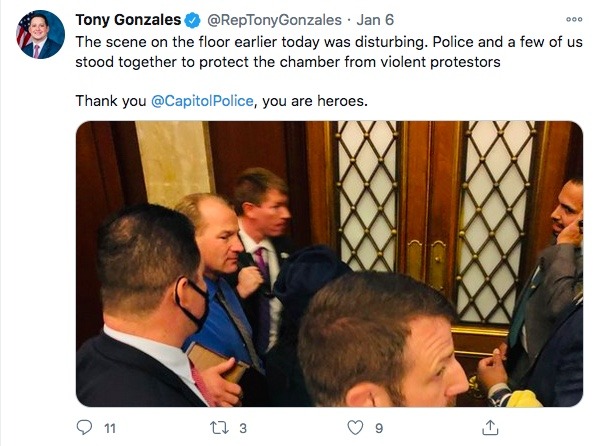 A mob descended on the U.S. Capitol last Wednesday in an effort to prevent Joe Biden’s election victory from being certified, threatening to breach the House floor and successfully breaking into the Senate. Tony Gonzales, the brand-new rep for TX-23, helped barricade a doorway. “It was kind of a fight-or-flight moment,” he said in an interview with The Big Bend Sentinel.
Subscribe

WASHINGTON — As The Big Bend Sentinel went to press last Wednesday, a mob descended on the U.S. Capitol building. Inside was Tony Gonzales, the newly elected Republican representative for TX-23.

The mob entered the building, smashing windows. Capitol police drew their weapons as rioters tried to break into the House Chambers. Gonzales sprang to action, helping barricade the doors. “It was very much a fight-or-flight thing,” he said in an interview with The Big Bend Sentinel last week.

A veteran, Gonzales served in both Iraq and Afghanistan. He recalled how in wartime, the atmosphere sometimes felt strange before an enemy attack.

Gonzales is new to D.C. — but as outgoing President Donald Trump grew increasingly frantic in his efforts to overturn the presidential election results, the mood in the city last week felt similar. “You could feel the energy was in the air,” he said. “You didn’t know what was going to happen, but you knew it was going to be a hectic day.”

That morning, President Donald Trump held a “Save America Rally” in D.C. He repeated his lie that the election was “stolen,” despite court rulings, recounts affirming his loss and all 50 states confirming their election results. He said that “people are not going to take it any longer.” He said that “you don’t concede when there’s theft involved.” He said that “we’re going to walk down to the Capitol,” where lawmakers were going through the routine process of certifying Joe Biden’s election win.

“I’ll be there with you,” Trump told the riled-up crowd.

A mob of thousands of angry supporters stormed the Capitol. Trump wasn’t with them. They attacked police, killing one, and forced their way into the building, ransacking offices and prompting lawmakers to evacuate. They attempted to breach the floor of the House and successfully smashed their way into the Senate.

As the violence began on Wednesday, Rep. Gonzales was on the House floor. He started getting texts from his staff about scuffles that were happening outside.

Then, the mob made it into the building. Security rushed off Speaker of the House Nancy Pelosi. “That was kind of the beginning of me realizing, ‘Hey, I gotta buckle up. It’s going to be a wild ride,’” Gonzales said.

As other lawmakers started to evacuate to a secure location, Gonzales noticed that there were just around two police officers on the House floor at that point. “In any kind of disturbance, there’s strength in numbers,” he said. Gonzales and some other Texas lawmakers, including reps. Pat Fallon and Troy Nehls, stuck around to help the officers.

When the violence finally ended, Vice President Mike Pence called it a “dark day in the history of the United States Capitol.” A Capitol police officer, Brian Sicknick, died from his injuries. Four rioters also died, including one woman who was trampled to death.

Trump’s baseless claims of voter fraud have been thrown out by courts, including by judges that Trump himself appointed — but that hasn’t stopped some Texas politicians from echoing his claims. Sixteen U.S. representatives from Texas ultimately voted not to certify Biden’s election win, more than any other state. Chief among Trump’s Lone Star enablers were Ted Cruz, the junior senator from Texas, and Ken Paxton, the state’s attorney general.

In a legally dubious move, Paxton used his public office to sue battleground states, challenging what he said were “irregularities” in their elections. The Supreme Court declined to hear the case.

Meanwhile, in the Senate that Wednesday morning, Ted Cruz launched a last-ditch effort to keep Congress from going through the routine process of certifying Biden’s win. Republican Senate Majority Leader Mitch McConnell warned those efforts, if successful, would send American democracy into a “death spiral.”

Some Texas Republicans wanted nothing to do with Cruz’s plans. In a social media post last week before the violence broke out, Will Hurd, the former Republican representative for TX-23, warned the efforts to overturn a presidential election were undermining faith in American democracy.

“Our adversaries are looking at this and using this as an excuse to further erode American’s trust in our Democracy and our institutions,” Hurd wrote in a tweet last Tuesday. “The election is over. Certify it.”

So did the editorial board of the Houston Chronicle, who argued that Cruz had brought “shame” upon Texas and that his “lies cost lives.” Thousands of lawyers have signed a petition asking that Cruz be disbarred from the State Bar of Texas. Cruz, for his part, has described the rioters as “despicable terrorists” while also calling on Democrats like Beto O’Rourke to “stop stoking division.” He hasn’t addressed his own role in inciting the deadly riot.

In the evening, when the House reconvened, Gonzales voted to certify Biden’s election results. He also put out a statement condemning the violence.

“I support the policies President Trump implemented and will continue to defend the conservative victories, but the Constitution is clear: states select their electors – not Congress,” he said. “When we look back on this day in history, let us not forget a violent mob’s attempt to undercut the rule of law. Our disagreements on politics cannot turn into hate or violence.”

Before the violence, Tony Gonzales signed on to a letter in support for AG Paxton. The letter highlighted Trump’s claims about “election fraud” and demanded that “illegal votes are not counted.” It thanked Paxton for his work in “safeguarding our nation’s democracy.”

When asked about this apparent discrepancy, Gonzales said there was a difference between expressing concerns about election fraud and a mob takeover of the Capitol. “People have to have confidence in our elections system,” he said. “I wanted to highlight that.” At the same time, he said, “I viewed the two issues separately”: Republicans could investigate their concerns around the 2020 elections while still performing their duty and certifying Biden’s election win.

“A lot of folks were trying to combine the two issues, oftentimes for political gain,” Gonzales added without naming names. “To me, that was very disturbing.” He said the numerous lawsuits over the 2020 election results had produced “no evidence” that he thought merited disputing Biden’s victory.

As Gonzales saw it, the mob was a sign of growing partisanship and division in America. He pointed to Black Lives Matter protests over the summer which he said also “weren’t civil.” “Everyone is to blame,” he said. “The far left and far right are two sides of the same coin.”

“I got to see firsthand the Capitol police fight off the barbarians at the gate,” Gonzales said. “In my eyes, they’re heroes.” He hopes that, if rioters ever try to storm the Capitol again, authorities will be better prepared and resourced.

“This isn’t going to be the last event,” he said. “This was not an anomaly; it’s just been growing. I look forward to making sure [Capitol police] have all the resources.”