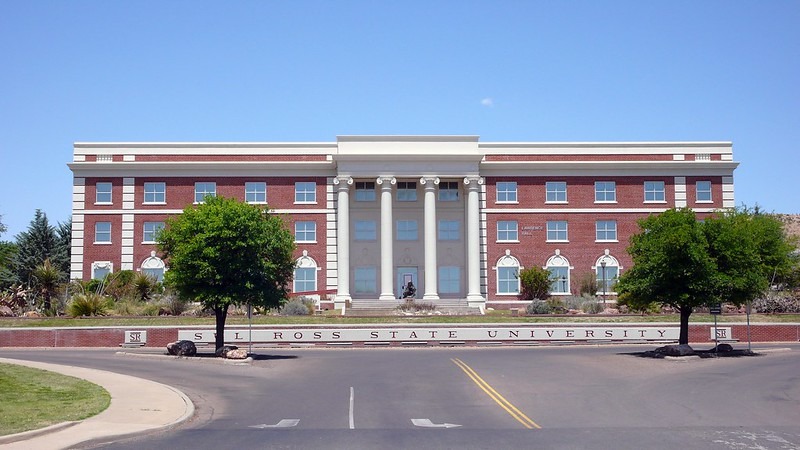 Proponents of the change, including Gutierrez, say the school has floundered in recent years and needs fresh ownership. But the news blindsided some locals, who say they would have liked more input in the process before the filing. Meanwhile, the Texas State University System says it’s managing the school well and will do “whatever it takes” to keep Sul Ross.

In phone interviews and in an informational packet, Gutierrez outlined why he says Sul Ross could be better served with a different university system. Under Texas State, the school has faced falling enrollment numbers, with the student body declining more than 20% from 2009 until 2019.

In the process, Gutierrez argues, the school has become a money pit. The state sends SRSU annual funding of around $11 million, and yet the school in a typical year only graduates around 300 people, according to Gutierrez.

On the other hand, he says, Texas A&M has a history of taking over and improving Texas universities, including in Laredo, Corpus Christi and Canyon. He also thinks there could be natural “synergy” between Texas A&M and Sul Ross, since both offer majors like geology, veterinary science and range management.

The transfer is a “no-brainer,” Gutierrez said. He argues it would improve not only the prospects of Sul Ross but of Alpine and other neighboring communities which rely on student dollars.

“I believe that A&M is a better fit for Sul Ross to prosper,” he added. “If this one move will make the lives better for young kids in West Texas and give them opportunities, then that’s all I want.”

The bill seems to have caught both school systems off-guard. When The Big Bend Sentinel contacted representatives for both systems on Tuesday, neither had put out a news release on the bill.

When reached for comment on Tuesday, a spokesperson for the Texas A&M University System declined to offer an opinion on the bill. He also declined to comment on whether A&M was aware of the proposed ownership change.

“We are neutral,” John Sharp, the chancellor for the A&M system, said in a statement to The Big Bend Sentinel. “We won’t support it or oppose it, but we will do whatever the Legislature decides.”

Mike Wintemute, a spokesperson for the Texas State University System, says Gutierrez had previously discussed the proposed ownership change with Texas State. But he disagrees with Gutierrez that the move would improve Sul Ross or Alpine and said Texas State had previously shared documentation arguing Sul Ross was in good hands.

Prior to filing his bill, Gutierrez says he reached out to the Texas State University System seeking more information on the system’s five- and ten-year plan to improve SRSU. “That was 60 days ago,” Gutierrez said. “We haven’t received anything.” Texas State disputes this assertion, saying it sent Gutierrez’s office multiple copies of a 118-page planning document. “All indications are that things are improving quickly,” Wintemute said, “and we have some data to back that up.”

Like A&M, Texas State says it will ultimately accept whatever the state legislature decides to do. But SRSU has been part of the system since its founding in 1917, and the school has worked well within the system, Wintemute said.

“We believe our system is the perfect fit for [Sul Ross],” he said. One goal of Texas State, he said, is to celebrate “the individuality and uniqueness of our institutions.”

Wintemute also pointed to school president Pete Gallego, who was appointed last summer after input from the community and who Wintemute said is clear-eyed about the challenges facing the school. “President Gallego is significantly focused on enrollment trends,” he said. “Every indication is that things are improving quickly.”

Wintemute contested the claim Sul Ross was faced with falling enrollment. Instead, he provided data showing enrollment has fluctuated over the years, often climbing during busts in the oil industry and vice versa.

“Economic realities do impact enrollment,” he said. And Far West Texas — unlike other places where Texas State has schools — “has not had the kind of population growth that other parts of the state have.”

Pete Gallego and his chief of staff, Michael Pacheco, did not respond to requests for comment on the bill. If A&M does ultimately take over the system, it’s unclear what would happen to Gallego’s role, much less to other mainstay institutions of the school, such as the Museum of the Big Bend.

If the change-over does happen, Gutierrez said he would “ensure to the extent that I can” that beloved Sul Ross institutions like the museum “are protected.” But he acknowledged those decisions may be out of his hands. “Those issues would be decided not by laws, but by the Texas A&M chancellor.”

Regardless, the move has raised questions for some in Alpine, including city officials who say they were blindsided by the move. They want to know more about what the switchover would mean on the ground, not only for Gallego but for faculty and students.

“I’m trying to understand the why,” said Alpine City Manager Erik Zimmer. “Before you make a hard turn, there should be key conversations with people in the community.”

Gutierrez, for his part, says he has been having those conversations. He’s spoken to Brewster County Judge Eleazar Cano about the proposal, he said, as well as to Alpine City Mayor Andres “Andy” Ramos.

As Gutierrez sees it, his plans were no secret. He spoke about it on the campaign trail as early as 2018, when he first ran in a special-election for his current state senate seat.

“We’ve been talking about it for about four years,” he said, stressing that he’d been in contact with Judge Cano since then.

Judge Cano did not respond to a request for comment. In an interview on Monday, Ramos confirmed that Gutierrez had met and discussed the proposal with him about three weeks ago.

Zimmer, the city manager, was displeased to learn this. “Ramos has yet to put that on the agenda for his mayor report,” he said, stressing that Alpine — as a weak-mayor system — was primarily run by city council. When asked about this, Ramos stressed that those conversations were informal. “It just became official yesterday,” he said of the bill.

Like Gutierrez, Ramos felt that Sul Ross could be better served by new ownership. “It’s always been in the back of mind we need to get either Texas Tech, [the University of Texas] or A&M to oversee Sul Ross,” he said. And like Gutierrez, he thought that A&M, with its focus on agricultural studies, would be a good fit.

Alpine and Brewster County regularly sees infighting among its local officials on issues like jail admittance and accusations of wrongdoing at Alpine police. But rather than politics, Ramos said the move was about making sure Sul Ross students were well-served.

“I think that’s the number one priority,” Ramos said. “We should put everything aside and concentrate on our kids.” And as he saw it, handing Sul Ross over to Texas A&M would be a “boost to Alpine.”