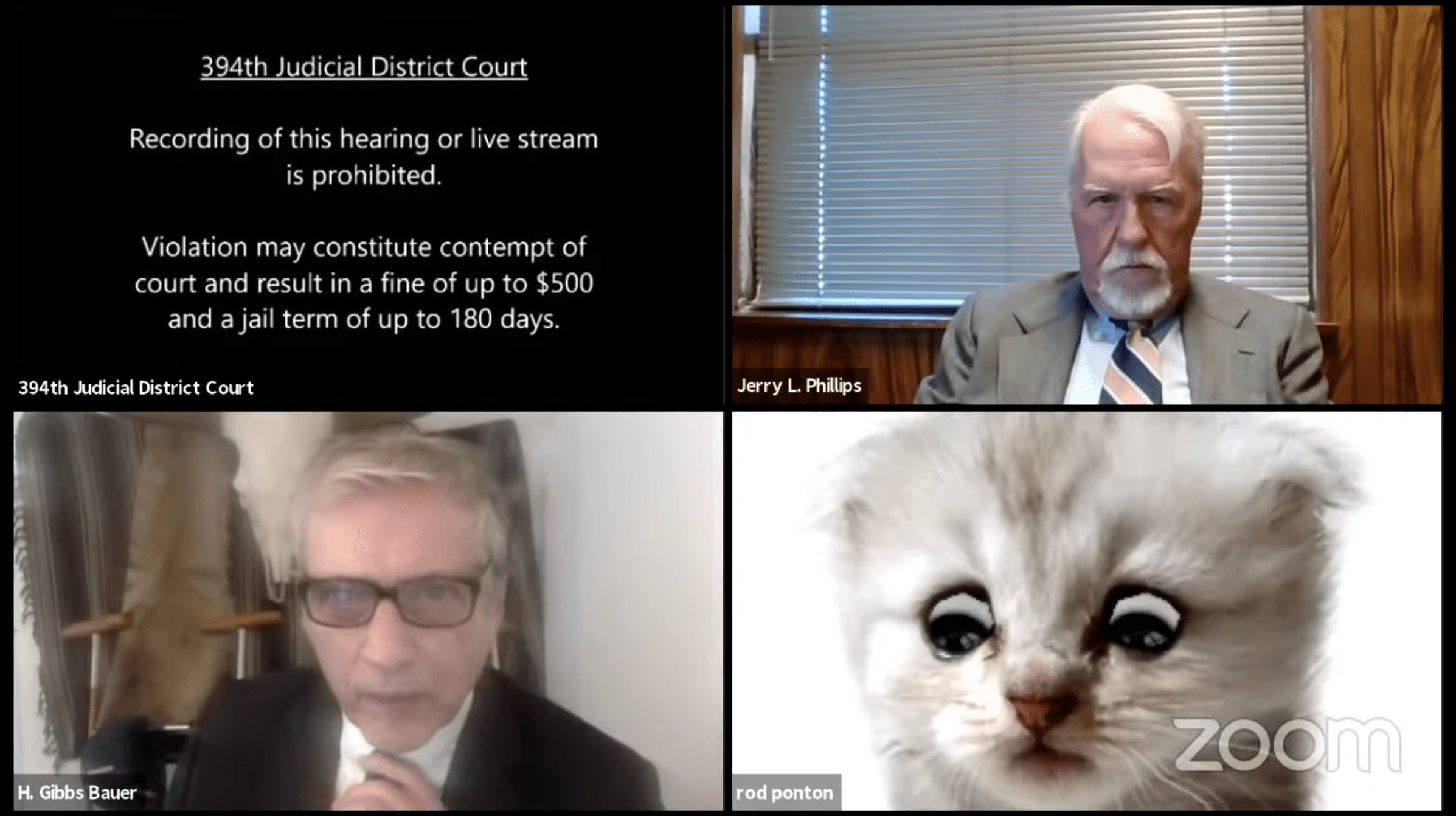 FAR WEST TEXAS — Roy Ferguson, the local judge for the 394th district of Texas, has been doing a lot of Zoom hearings during the coronavirus pandemic. The pivot to online hearings hasn’t always gone smoothly. There was the time someone logged into a court hearing while driving. Another time, someone tried to attend court from bed.

Ferguson has a Twitter account, which he likes to use as “a teaching tool for virtual hearings,” he said in a phone interview on Tuesday. That morning, his court saw a comical mishap that seemed to him like a perfect teachable moment.

“I can see that,” Judge Ferguson replies in the video. Shortly after the video ended, Ferguson told The Big Bend Sentinel, Ponton managed to turn off his filter, and the hearing went on as planned.

Later, Ferguson uploaded a clip of the video. He posted about it on Twitter.

“IMPORTANT ZOOM TIP: If a child used your computer, before you join a virtual hearing check the Zoom Video Options to be sure filters are off,” he wrote. “This kitten just made a formal announcement on a case in the 394th.”

Within an hour, the clip was going viral. By that afternoon, tens of thousands of people had liked and shared versions of the video online.

By Wednesday, one version of the video on Twitter had almost 30 million views. At press time, it was the top Google result for the word “cat.”

Vice News covered the situation, describing Ponton as “cat-Ponton.” Houston Chronicle put the story at the top of their Tuesday afternoon newsletter with the headline: “‘I’m not a cat’: Texas lawyer caught in Zoom filter mishap.” The New York Times wrote about Ponton’s mishap, as did Texas Monthly. International news outlets were soon also covering the story, from the BBC in the United Kingdom to the South China Morning Post in Hong Kong.

“I’m regularly tweeting things that happen in hearings as warnings and teaching moments,” Judge Ferguson said. “I never expected that any one [of them] was going to spread as this one has.”

Texas courts have done well over a million virtual hearings, he said. He himself has done more than 1000. To him, the mistake was a natural result of the “drive” of Texas lawyers and judges to “keeping the justice system operational.” He commended Ponton for “the grace with which he handled a very difficult situation.”

“It was a nice moment of levity,” Judge Ferguson acknowledged of Ponton’s appearance as a kitten. But for him, the main takeaway was “the level of professionalism that Texas lawyers bring to virtual courts.”

In his own interview on Tuesday, Ponton was taking his moment of viral fame in stride.

“I’ve had interviews with the Today show, New York Times, CNN, Fox News, Texas Monthly, you name it,” he said with a laugh. “You never know what’s going to tweak the attention of the Twitterverse. And this just happened at 11 a.m. this morning.”

Ponton had mixed feelings about the situation. “On the one hand, you want to feel embarrassed because you feel [you] screwed up a court hearing,” he said. He was acutely aware that all over the country, people were having a laugh about the video.

“On the other hand, it was unintentional,” he said. “I think everybody relates to it. Who hasn’t had a screw-up on their computer?” And as far as Zoom-meeting screw-ups go, this one was pretty benign.

“We’ve been going through such stressful times, between COVID and politics,” Ponton said. “If the country gets to have a laugh at my expense over the cat video, I’m happy to take it.”

One mystery remained, though: How did the kitten filter show up on Ponton’s Zoom call in the first place? Ponton said he wasn’t sure.

Ponton was in Presidio on Tuesday morning, and he logged into the hearing from his secretary’s computer. She has kids — and maybe, Ponton speculated, that was why the kitten filter was on. But even that was just a guess.