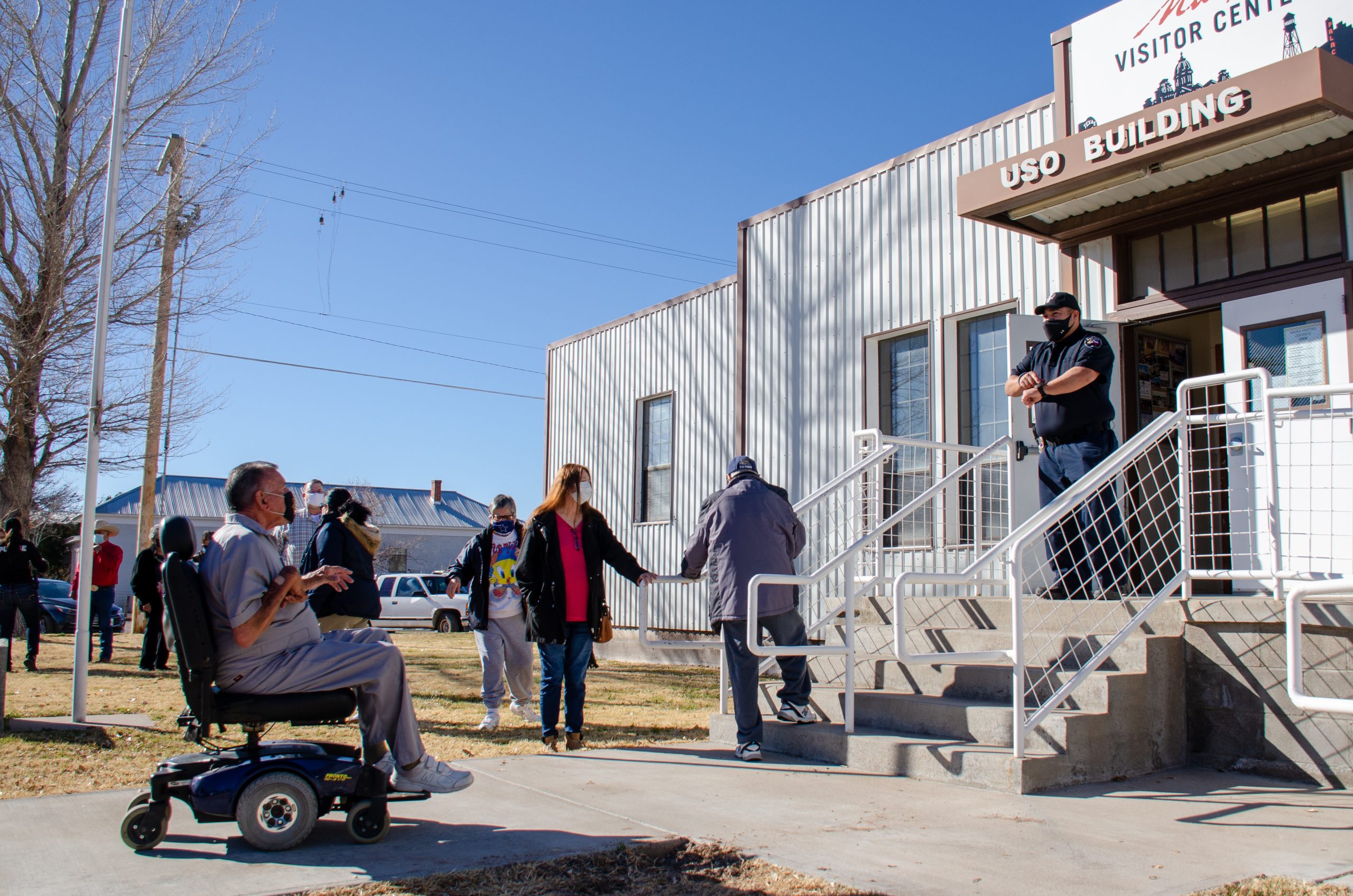 Residents made appointments and traveled from across the tri-county to get vaccinated on Tuesday at the USO Building in Marfa. Around 500 individuals were successfully vaccinated that day, but as some without appointments got in, many with appointments were turned away in the afternoon as vaccines ran out. Photo by Carlos Morales / Marfa Public Radio
Subscribe

PRESIDIO COUNTY — While a mass vaccination event in Marfa on Tuesday successfully put 500 vaccines into the arms of area residents, dozens of people left disappointed when doses ran out before their afternoon appointments.

The event was run by Midland Memorial Hospital, which brought Pfizer vaccines and a handful of vaccinators for the one-day event. Marfa Clinic workers volunteered to assist, setting up the 500 appointments by painstakingly finding individuals eligible for the COVID-19 vaccine. The City of Marfa offered up the USO Building as a venue, and elected officials and staff from the city, the clinic and Presidio County volunteered time to ensure the event ran smoothly.

At its morning start, the event was “so well organized,” said Marfa Councilmember Buck Johnston, who volunteered at the event. Eight vaccination stations were set up, and patients arrived in five minute increments. They filled out forms and received their first dose of Pfizer’s vaccine.

But the efficiency turned out to be a problem: The event was moving so quickly that medical staff were seeing downtime between patients. At that point, the hospital urged local officials to contact people with appointments and request they arrive earlier, according to Marfa City Manager Mandy Roane.

Hospital officials “just said we weren’t moving fast enough,” Roane told city council at a meeting Tuesday night after the event. County Emergency Management Coordinator Gary Mitschke was asked to send out a reverse 911 call and text, urging residents with an appointment for the COVID-19 vaccine to come to the USO Building. Shots could be administered “earlier than your appointment time,” the message told residents.

Elvira Hermosillo, a 33-year-old Presidio resident who teaches English to adults, was eligible for the vaccine because a previous brain-tumor qualified her as having a pre-existing condition. Hermosillo got the reverse 911 text message at 11:55 a.m. — but she was unable to go early.

“I work, and I have a 3-year-old son,” she said. She had already arranged for a babysitter so she could make the one-hour drive to her 2:25 p.m. appointment.

The reverse 911 call ultimately caused more confusion, triggering a flood of people who didn’t have appointments to show up, “thinking there were extras,” City Manager Roane said.

The city wanted to stick to the appointment schedule, Roane said at the meeting, but they couldn’t override the decision by Midland workers, who were handing out paperwork to anyone that arrived. People were getting vaccines on a first-come, first-serve basis, regardless of their eligibility under state guidelines.

Roane and Marfa Clinic workers tried to grab anyone with an appointment and put them ahead of those who didn’t. She counted the pages of remaining appointments and informed the vaccinators that the number of people on the list outnumbered the rest of the vaccines.

Hermosillo arrived on time for her vaccine that afternoon, but it was too late. Every vaccine dose had already been administered. She was turned away by Marfa police officers stationed at the doors of the USO Building. “I was confused because nobody gave me an explanation,” she said. First she felt shock and disbelief, “but then I was angry, because I made the drive up [to Marfa] for nothing.”

“I didn’t think it would be a problem,” Hermosillo said. “I had an appointment.”

As the vaccination stations were disassembled and carted out of the building a little before 3 p.m., James Jackson, 71, pulled up in Marfa after driving over 100 miles one-way from his home near Terlingua. He’d had some reservations about the vaccine, but heard Marfa had the shot available and booked an appointment. Like Hermosillo, he was turned away, with little understanding of what had gone wrong.

Midland Memorial Hospital was unable to return a request for comment before press time. Ahead of the event, a representative said the hospital was looking into the option of having more of these one-day vaccine clinics “depending on the need for one, but also depending on the state’s allocations of vaccines.”

Those allocations, the spokesperson said, would be a determining factor in whether they will return for more first-round vaccinations. The hospital is currently scheduled to return on March 2 to give second-round vaccines to those who were vaccinated this Tuesday.

While Fort Davis and Marfa received staffed events from the hospital, Presidio’s Preventative Care Health Services clinic was instead given 400 Pfizer vaccines from Midland Memorial Hospital in late January. It was fewer than Marfa’s 500 doses, despite having a population nearly three times the size.

Still, PCHS clinic staff was able to successfully administer those shots, along with additional Moderna shots, to Presidio residents between January 30 and February 2. Between that week and the following week, “We did over 1,000 vaccines for the first and second dose,” PCHS CEO Linda Molinar said.

Before the Marfa event, Hermosillo was already somewhat disillusioned with the vaccine rollout process. “I feel like here in Presidio we always get treated like second-class citizens. The clinic here has told us they have no idea when they’ll be getting more vaccines, so we feel here in Presidio, nobody considers us.”

Molinar said the clinic isn’t sure at this point when they will be given shots again. Despite requesting vaccines through the state system multiple times over the past weeks, PCHS has not had any of those requests fulfilled.

The attempt to get vaccinated in Marfa left Hermosillo even more disaffected. “I think what really upset me was that idea that Presidio always gets overlooked,” she said. “It’s not even an idea – that’s our experience.” She’s now considering driving to Pecos, three hours from her home, to get the shot.

At the Tuesday night city meeting, Councilmember Johnston said, “I don’t want Marfa Clinic and City of Marfa to take this hit. That was not the plan. The plan was not followed, and we’re sorry.”

After learning he would not be receiving a shot on Tuesday, Jackson, the Terlingua-area resident, stood outside the USO building. “I don’t blame anyone,” he said, “but I just wish I hadn’t driven all that way for nothing.”

On Wednesday, Marfa Clinic worked with Midland Memorial to secure additional doses for those whose appointments weren’t fulfilled on Tuesday. “We’re calling all of our 60 people who failed to obtain their vaccination yesterday, and we’re going to distribute them on Friday,” said Don Culbertson of Marfa Clinic.