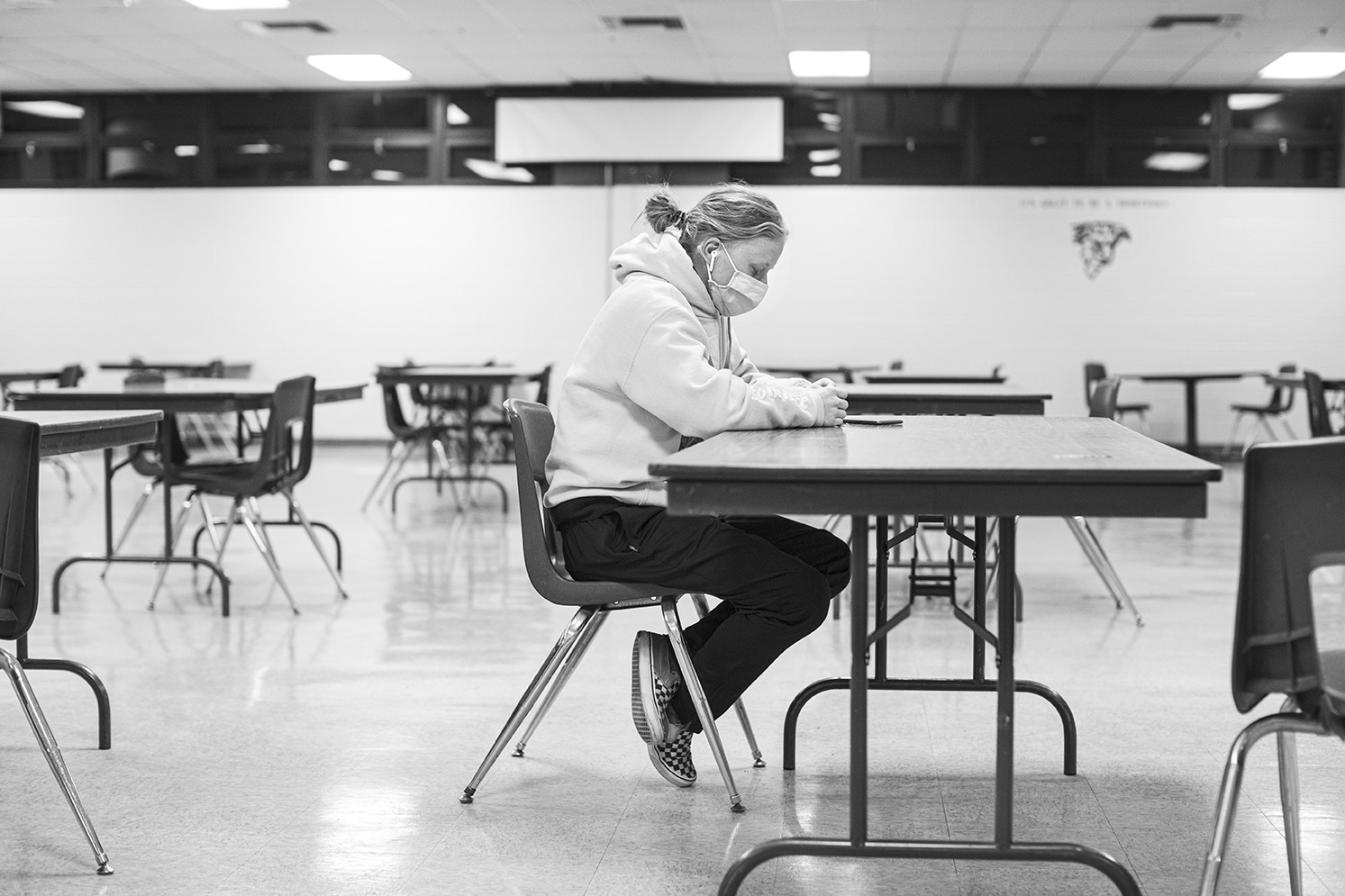 Kasey Bruce sits at the warming station in Marfa schools’ cafeteria. The college freshman left her dorm at Sul Ross after losing power and water, headed for her hometown Albuquerque, but gas pump shut offs stranded her in Marfa. Photo by Maisie Crow
Subscribe

ALPINE – Students living at the Sul Ross State University dorms found themselves in the cold and darkness on Monday, like millions of others across the state of Texas. Then, a pipe burst.

As power outages slammed parts of Alpine and freezing temperatures took hold, a water pipe break sent students fleeing to the chilly outdoors. At one point, a school official confirmed the sprinkler system in a dorm went off, though the official wasn’t sure for what reason.

Students sought refuge and a place to lay their heads, and the school set up cots and entertainment at the Gallego Center, which was still connected to power on Monday, despite widespread outages on campus.

Many of the campus buildings were affected with power outages, according to Dean Wilkinson, the school’s executive director of communications. “It’s been a bit of a mess. We’re trying to be nimble about it.” Hundreds of students moved from the residences, but Wilkinson was glad that at least the Gallego Center had enough square footage to hold all that needed a place to stay, even with COVID-19 social distancing in place.

“There was no electricity or hot water this morning,” said Sul Ross freshman Kasey Bruce on Monday, “and someone smoked inside and set off the sprinklers,” or so she had heard. Bruce had left her dorm on Monday evening and decided to forego spending the night in the gym. “I wasn’t going to stay, I’d rather go home and have a nice hot meal,” she said.

Bruce was driving from Alpine to her hometown of Albuquerque, but was low on gas when she set off. Pulling over to a Stripes on her way through Marfa, she learned the pumps were shut off because of the power outage. She was out of gas and stranded.

While waiting for AAA, the freshman student found warmth in the Marfa schools cafeteria, converted into a warming center for all who needed to escape the cold. She was trying to avoid sleeping on a floor at SRSU, but now was just hoping to make it to a hotel in Van Horn if she could get the fuel to make it there.

Back at the Gallego Center, dozens of students were gathered, hanging out on cots, listening to music and playing video games on a few computer screens that the school had set up.

Bruce’s pursuit of a hot meal was founded, since the cafeteria at SRSU had lost power. But by Tuesday, electricity there had been restored, and Aramark employees were back to cooking up hot meals instead of just sandwiches. Wilkinson said students were being given two full meals a day there.

SRSU President Pete Gallego assured students in a letter on Tuesday that the Gallego Center would remain open as long as they needed it. Even so, because electricity had been off and on, classes were moved online for the remainder of the week. Residents of Lobo Village 1 and 2 were allowed back in their rooms to retrieve belongings, but will have to remain at the Gallego Center until the fire system contractor can travel from San Antonio to re-certify the school’s fire alarms. 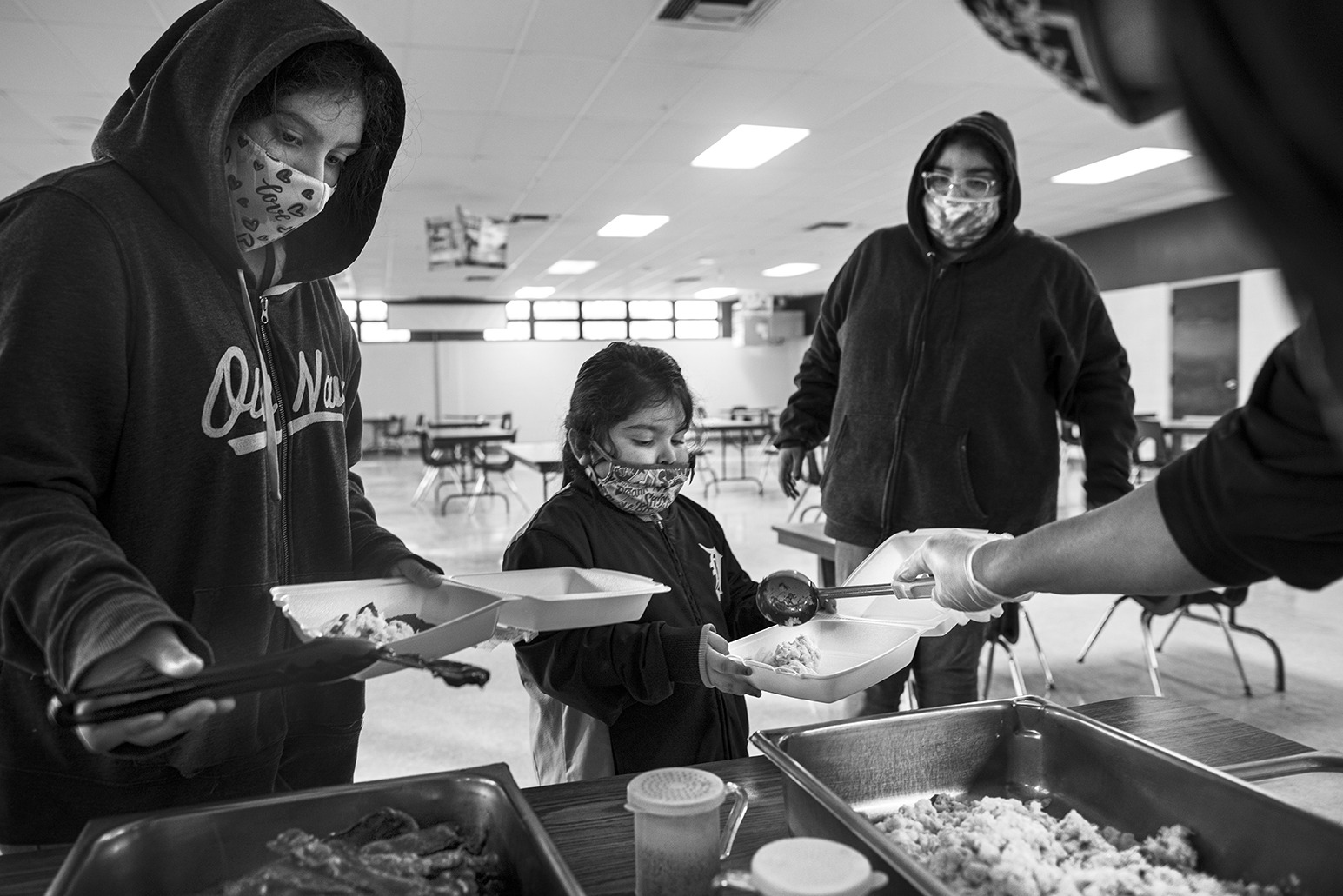 Millions without power in Texas, but Presidio escapes the worst of it