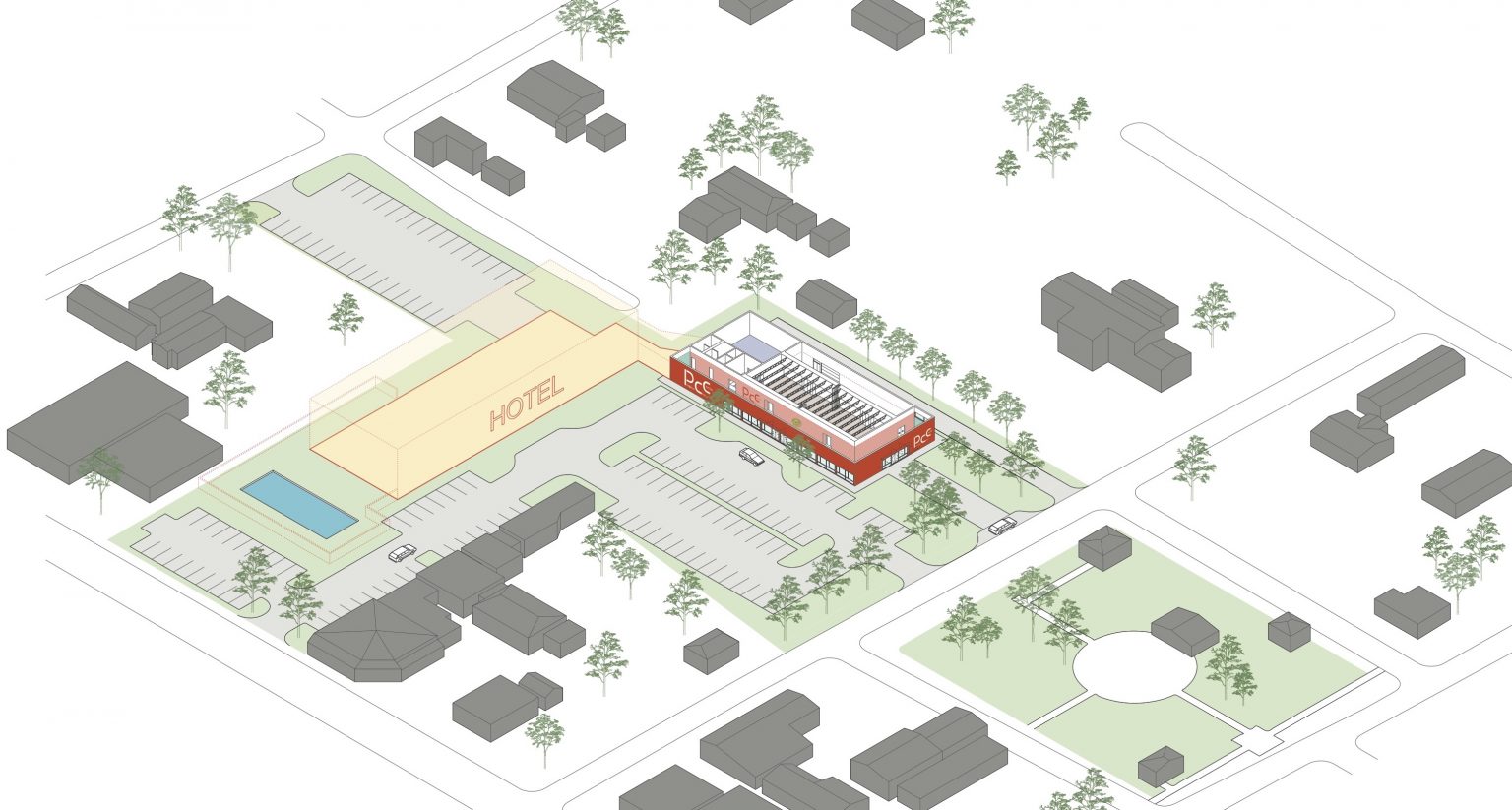 Designs for Presidio’s new proposed convention center and hotel by Carlos Jiménez, a Houston-based architect. The two projects — though technically separate — were being planned in a “collaborative way,” City Attorney Rod Ponton said at a council meeting earlier this month. At the meeting, council voted unanimously to start the process of accepting proposals from hotel developers. Image courtesy of the Presidio Municipal Development District
Subscribe

PRESIDIO — Presidio City Council this month approved a formal RFP (request for proposals) to build a new hotel in downtown Presidio. That public notice will start the process of finding a developer willing to build a hotel in exchange for free city land.

That project, as The Big Bend Sentinel previously reported, is part of a vision by city leaders to remake Presidio with an eye towards increased tourism. The hotel, which would be privately financed, would be adjacent to a new proposed convention center. City leaders hope to find grants for the convention center, with the goal of making that project also cost-free for residents. But when the plans came up at a city council meeting this month, some council members had some questions and concerns about the project.

At the start of the discussion, Rod Ponton, the city attorney for Presidio, laid out the vision for the project. The city had owned unused land in the center of town for around 15 years, he said, and “now it’s ready to be turned into something positive.”

Residents “don’t want to pay tax money for a hotel,” Ponton said, “and I don’t blame them.” But he stressed that if all goes to plan, the downtown transformation project would be free to residents.

The actual hotel would be paid for and built for a private developer in exchange for free land, he said. Meanwhile, city leaders are also looking for ways to finance the convention center, either by finding grant funding for the actual construction, or by paying for it up front and then getting “rebates on state taxes back to the city.”

The hotel and convention-center projects — though technically separate — would be built in a “collaborative way,” he said. They are part of an effort to “really transform downtown Presidio.”

“The dream here is to have an 80- to 100-room, first-class hotel in downtown,” Ponton said. And the RFP, rather than locking Presidio into a contract, would simply invite developers to make proposals. “Show us what you got,” he explained. “Show us your plans. Show us your finances.”

Patricia Runyan, a fourth-generation Presidian who just joined council last month, raised some concerns about the project during the meeting. She asked Ponton whether he was aware of Midland “going into debt” in efforts to build a convention center. Ponton said he was not.

“I would suggest looking it up,” Runyan said. Midland, she said, had poured resources into a convention center that had ultimately gone largely unused. In response, Ponton once again stressed that even after putting out formal RFPs, there would still be “zero money committed” from the city. “Y’all get to look at everything,” he said of any proposals that might come in from developers.

Ponton further elaborated why he thought the project was important. “We think this is a good time to do it,” he said. “Presidio, I think, is right on the cusp of an upswing.” He outlined some potential growth areas for Presidio, including a refurbished international rail crossing and the more than 1 million international travelers who passed through Presidio every year and might stay at a Presidio hotel.

Runyan was still skeptical. “I want to look between every line and dotted i,” she said. “This just sounds stupid to me.”

Runyan brought up another concern she had with the project: Only around 87% of the land being offered to a hotel developer belonged to Presidio. The remaining 13%, she said, still technically belonged to the hospital district. “We would be putting out an RFP for land that technically isn’t ours,” she said.

Ponton said this wasn’t a problem. The city had worked out “a plan” with the district and was treating any land-ownership issues with “due diligence,” he said.

“I’m not going to fight it,” Runyan said. “I put in my two-cents worth. I’m brand new to the council.” She was just raising questions, she said, because “I don’t want to see the city get in a bind.”

Councilmember Irvin Olivas motioned to approve the RFP process. There was a long pause, and no one else seconded. “Remember, there’s no city commitment now,” Ponton said.

“I’m kind of still confused,” Councilmember Rogelio Zubia chimed in. “We’re talking about a hotel, and then a convention center?”

Runyan asked why — if a new hotel made economic sense in Presidio — the city needed to offer enticements like free public land. “If it’s such a good idea, why can’t Motel 6 or somebody just come in and do it on their own?”

“In the hotel industry, it generally takes the first one,” said Brad Newton, the executive director for the Presidio Municipal Development District. If developers saw a successful flagship hotel, they might choose to build another. It was the “same with fast food” and other industries, he said. He pointed to the situation with dollar stores in Presidio, where the success of one had led more to arrive.

After more back-and-forth, Councilmember Olivas said he was just interested in learning what proposals came up. “I want to see who comes in,” he said. “At that point, I can say, ‘No, no, no.’”

Ultimately, Runyan agreed to second the motion. “I want to see it too,” she said. Mayor John Ferguson, who’d stayed quiet throughout the discussions, voiced his support for that viewpoint.

“I’d like to just see what this entails,” he said. “I encourage you guys to at least give this a look.”

In the end, the motion passed unanimously. Councilmember Rogelio Zubia also agreed to support it — though he stressed that he wanted to keep the process formal and above-board. “Can we make sure none of these people come in in-person?” he asked.

At press time on Wednesday, the process of publishing that proposal was still in the works. Presidio has not yet submitted a public notice to Presidio International as required by law for public bids like these. Reached for comment on Wednesday, Mayor Ferguson explained that the original RFP was around 20 pages — too long a notice to run in the paper. City officials were working to “condense it into something” that could then be published, he said. Officials hope to have that notice ready by next week.