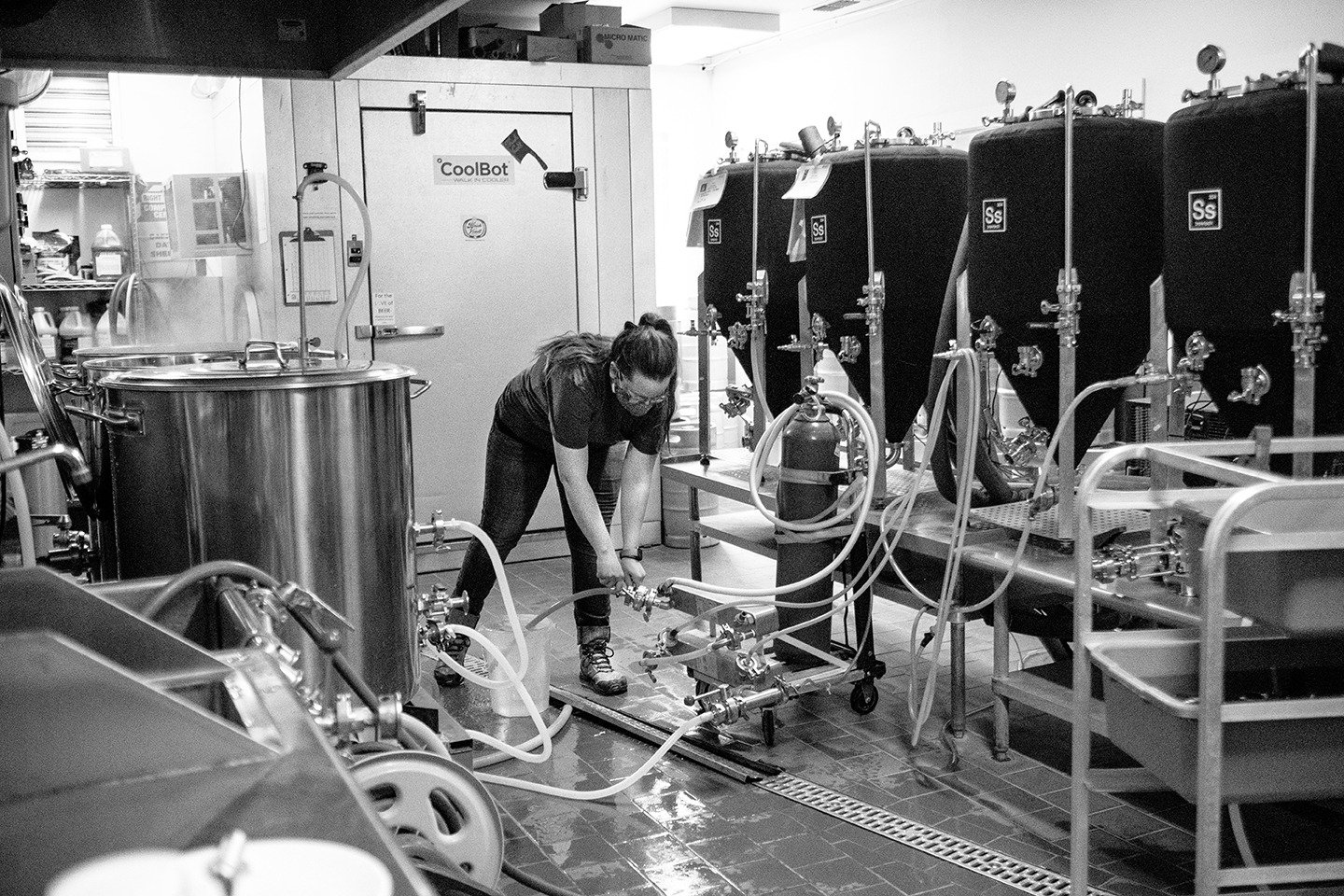 MARATHON — On Monday, four West Texas women gathered among the fermenters and brewing pots at Brick Vault Brewery in Marathon to celebrate International Women’s Day and make a beer in the name of West Texas icon Hallie Stillwell. The group joined female brewers across the country, taking part in the Pink Boots Society’s Collaboration Brew Day.

Amy Oxenham, the head brewer in Marathon, had invited a fellow brewer, an apprentice and a curious college student to join her in the brewing process that day, with the goal of introducing more women to the beer industry and, by the end of the month, having a brand new beer to show for it.

Among those women was Kelly Jones, a current taproom worker at Brick Vault with a strong passion for beer. Jones moved to Alpine last May when her husband took a job in Border Patrol, and was soon spending hours filling up her growlers – glass beer jugs – and hanging out at Brick Vault. Before long, Oxenham was asking Jones, “Do you want to work here?” The answer was obvious.

In the brew room on Monday, the women were steaming barley to create sugar water that would be fermented into beer. As it boiled, they discussed the difficulties of being a woman in the beer world.

Jones is an avid visitor of breweries; after giving birth to her son Bear, a brewery was his first outing, and the three year old has since racked up 54 brewery visits himself. Even so, Jones said she has a hard time being taken seriously. “Half the time I’d go up to the bar and they’d try to ‘mansplain’ to me about beer. I know my beer, I know what I like,” Jones said. But the women she encounters in Brick Vault’s taproom “know beer,” she said.

The beer industry can be tough for women, Michelle St. John-Franks from Midland-based Tall City Brewery pointed out as they waited for the sugar water to boil. “West Texas is always going to be challenging for women to work in brew as it is right now,” St. John-Franks said. But she credited Oxenham for helping challenge that standard. “She has really started something by promoting the Pink Boots Society.”

The Pink Boots Society is a network of women in the beer industry, created to support women’s growth in the industry and provide scholarships to continue their brewing education. Members can join as long as they make 25% of their income from beer, which includes serving, selling or making it.

Oxenham first joined PBS while she was working and studying under the head brewer at Big Bend Brewing Company. Working there, her love for the beer-making process grew, and the self-described “beer nerd” and “fermentation enthusiast” went as far as pursuing a biology degree from Sul Ross State University so that she could understand the science behind the beer.

As her time in the industry continued, the gap between men and women became clearer. Texas has hundreds of breweries, but only a handful are involved in the Pink Boots Society, she said. Oxenham said part of the problem is that the jump from “front of house” to “back of house” – from serving beer to making it – can be incredibly hard for women.

“Almost every brewery has females working in their taproom,” Jones noted on Monday. “They’ll serve beer; they just don’t have the gateway into the brewery, because most of the people in there are men.” She speculates that the men might assume women “don’t want to cross that bridge to the back,” Jones said, “Whereas here, Amy opened that door before I even knew it.”

“It’s always been my dream to learn to brew and go to brewing school, but I just never really had an in,” Jones said, “because the breweries I’ve always gone to don’t feel like they are as open to females getting into learning about actually brewing.”

Monday was Jones’ first experience participating in the making of a beer at Brick Vault, and she was eager to observe and learn from Oxenham. Alongside her was Sul Ross State University senior Cierra Noel, who Oxenham had also recruited. Noel had never given much thought to brewing, but after seeing a female head brewer, she was more drawn to the craft. “They’re teaching me everything and showing me the ropes,” Noel said.

As the sugary wort was boiling, creating the liquid that would soon begin its fermentation, Noel was asked to ceremoniously add the bag of hops to the wort. This year’s blend has five different hops in it, hand-selected by the PBS and distributed to every collaboration brew day participant. While the beers being made on International Women’s Day have the same hops, they will come out tasting different, based on the brewing techniques.

Oxenham said she “couldn’t fathom” making a reduced-calorie or reduced-alcohol beer for Women’s Day, so the beer will have a 6.5% ABV, and be a pale ale, she said, “solely to showcase the flavor and aroma of the hops PBS has been working on all year.”

As head brewer, Oxenham wants to encourage more women to follow her footsteps. It’s why she has opened the door for others and why she wants to grow the PBS chapter in West Texas. Earlier this month, she even took the Pink Boots members down to visit the Stillwell Ranch and the Hallie Hall of Fame Museum in south Brewster County, to draw inspiration from a strong West Texas figure: Hallie Stillwell.

Stillwell was a pioneer rancher living on the frontier in the Big Bend in the early 1900s, herding cattle, mending fences, writing books and raising three children. She mastered skills in a world of cowboys, and this week, inspired the small group of West Texas women brewers to press forward in their own male-dominated industry.

“Everything is better when things are more diverse,” Oxenham reflected, “and I believe that’s true for beer as well.”

Oxenham commissioned local artist Eva Calderon to design limited edition pint glasses and mason jars with Stillwell’s likeness, which will be sold at the special launch event for the beer at the end of the month. Part of the event’s proceeds will go to more scholarships through the Pink Boots Society.

With the blessing of Stillwell’s great-great-granddaughter, the beer will be named after the West Texas pioneer. The weekend of March 27, Brick Vault will release Hallie’s Ale of Fame.