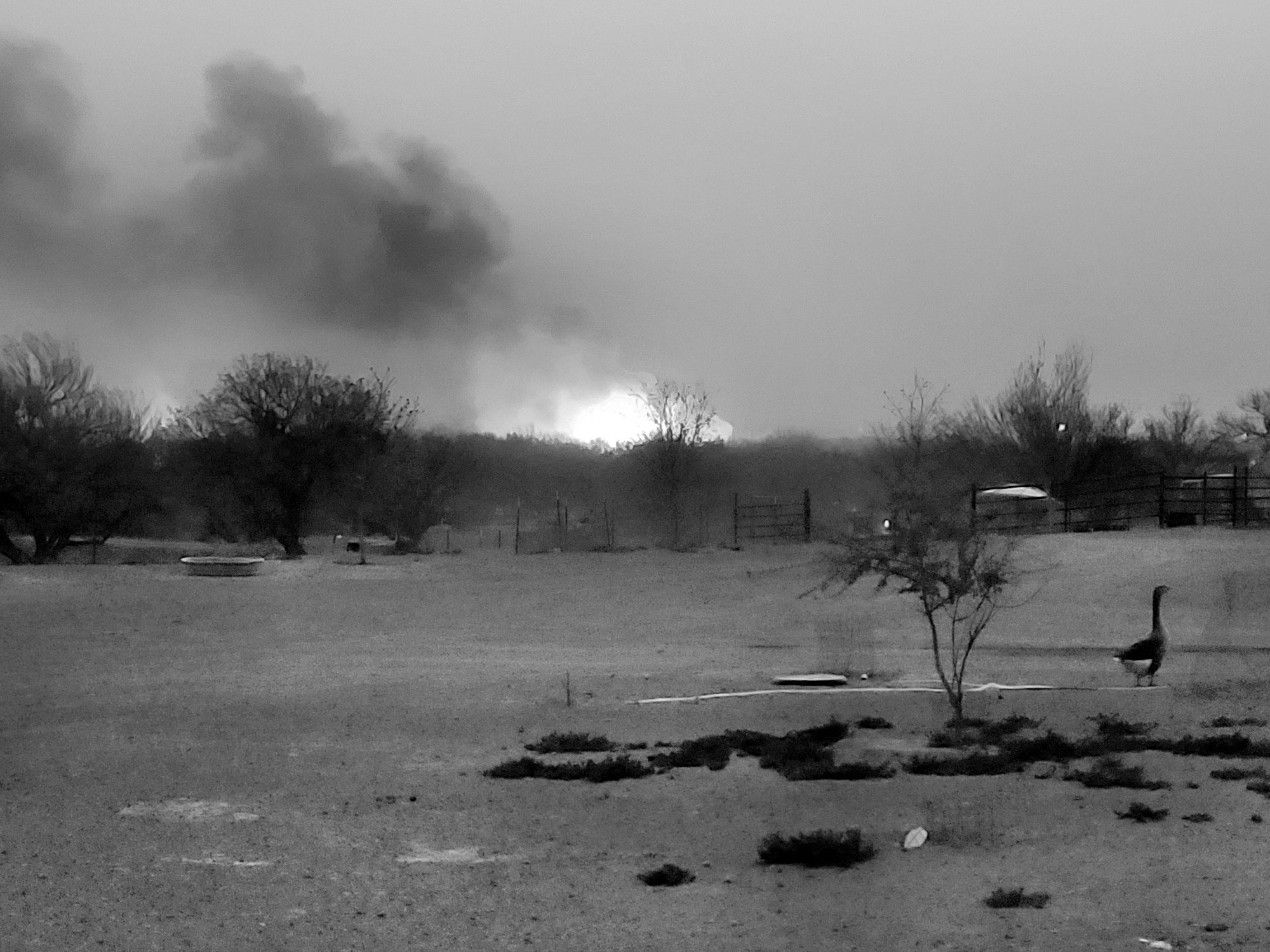 A fire burned through 200 acres of land east of Redford this Monday, coming near, but ultimately avoiding damage to, a handful of homes in the area. Photo by Kristian Juarez
Subscribe

SOUTH COUNTY — On Monday afternoon, as winds gusted dangerously high, a fire broke out southeast of Redford, near the Mexican town of El Mulato. Fire departments from cities all around West Texas helped beat the blaze, and homeowners in the area were relieved to have their homes and structures mostly unscathed. When all was said and done, around 200 acres of land had been burned.

Witnesses on the scene described the fire starting in Mexico early Monday afternoon, when local farmers began burning brush and dead vegetation as they do each spring. With the wind toward the United States, the fire spread across the low river, igniting brush on the U.S. side. Soon it had crossed highway 170.

“I was working when I saw the fire, and the fire was still on the Mexico side when I saw it, but the debris was flying to the Texas side,” said Kristian Juarez, who works for Angell Expeditions in Redford. He also lives in one of the handful of houses that dot the area east of Redford, and Juarez said at first, smoke was hitting his home.

The Presidio Fire Department responded to the scene, requesting help and receiving it from Terlingua, Marfa and the bomberos from Ojinaga. “As far as responding units, Presidio requested for Marfa, Marfa sent a truck and command vehicle down, Ojinaga sent a truck over from Mexico and then I suggested they call Terlingua,” said Presidio County Emergency Management Coordinator Gary Mitschke.

With the wind whipping, the fire approached the rural houses outside of Redford. Power lines and phone lines were burned as the wind picked up. Firefighters on the scene were able to create a fire break to stop the spread as it threatened some of the homes that have occupants.

“There’s all sorts of firefighters there battling the fire in the wind,” Redford resident Charlie Angell reported on Monday evening.

Juarez, who works in Redford, lives with his aunt, uncle and cousin in one of the homes east of the town. “The fire was next door to me,” Juarez said. “Our land is kind of open and there is not much for it to burn, so it was the fire’s stopping point on our side,” he explained. Around the property, vegetation was blackened and smoldering that evening.

On Monday night, Juarez said the fire was still burning but looked like it was “getting pushed back towards the river.” The following morning, Presidio Fire Chief Saul Pardo reported to County EMC Mitschke that the fire, except for some hot spots, was pretty much controlled and out. “Once the wind laid last night, it burned itself out for the most part,” Mitschke said. Pardo could not be reached for comment before press time on the total acreage burned.

Ojinaga Mayor Martín Sánchez Valles commended his crew for demonstrating “their preparedness and courage by putting out the fire in the sister city of Redford, Texas,” saying, “This is a reflection of international cooperation between borders and surrounding cities.”

As the Ojinaga bomberos headed back home to Mexico, their fire truck experienced issues and had to be left behind in the United States overnight. Presidio Mayor John Ferguson on Tuesday solicited help from the Presidio community, asking the town to “show our debt of gratitude to the hard work and sacrifice that Ojinaga has made to help Presidio by returning the favor somehow.” He suggested making monetary donations to the Ojinaga Fire Department, “to really try to do what we can to show our appreciation to Ojinaga for always coming to our aid when there are emergencies in Presidio.”