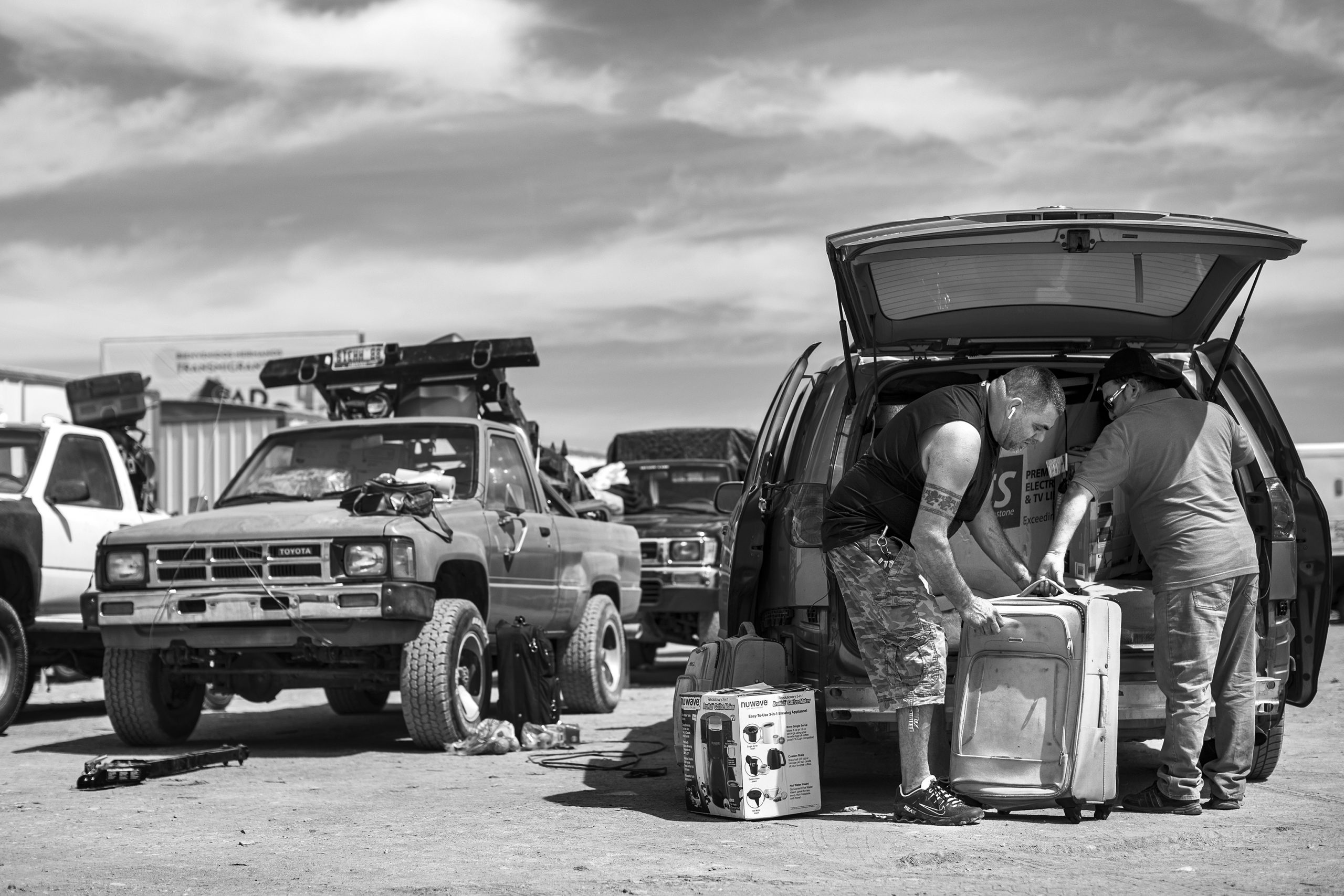 Photo by Maisie Crow / Carlos Rivera (left) and Hector Pacheco rearrange items in one of the vehicles they’ve purchased in the US to transport through Mexico and sell in Guatemala. The new transmigrante route using the Presidio port of entry opened last month.
Subscribe

PRESIDIO – “Well, boys I just arrived at the agency,” Hector Pacheco said as he filmed a vast parking lot outside of Presidio last week. “This is the American side, look at everything that’s here. A lot of people are going to come.”

Pacheco had just traveled the 1,100 miles from Utah to Presidio with a vehicle in tow, each car brimming with goods purchased in the U.S. He’d arrived at the newly opened parking facility for transmigrantes owned by SAD, Servicios Aduanales del Desierto –– the Ojinaga/Presidio-based brokerage agency with offices on Mexico’s southern border. He was eager to report his findings to other transmigrantes, posting his video in a Facebook group dedicated to the traveling merchants that resell used U.S. goods in their home countries in Central America.

He is one of more than 200 transmigrantes who have used the Presidio port since its opening in late March, and SAD officials anticipate 200 or more per day in the coming months.

Pacheco makes the journey several times a year, and until last week, he’d always driven his merchandise through Los Indios –– a South Texas town which had the only port of entry to service transmigrante traffic until Mexico authorized transmigrante travel through the Presidio port last month. Pacheco was intrigued by the new route and hoped it would be safe. If he made it to Guatemala without problems, he’d return again. 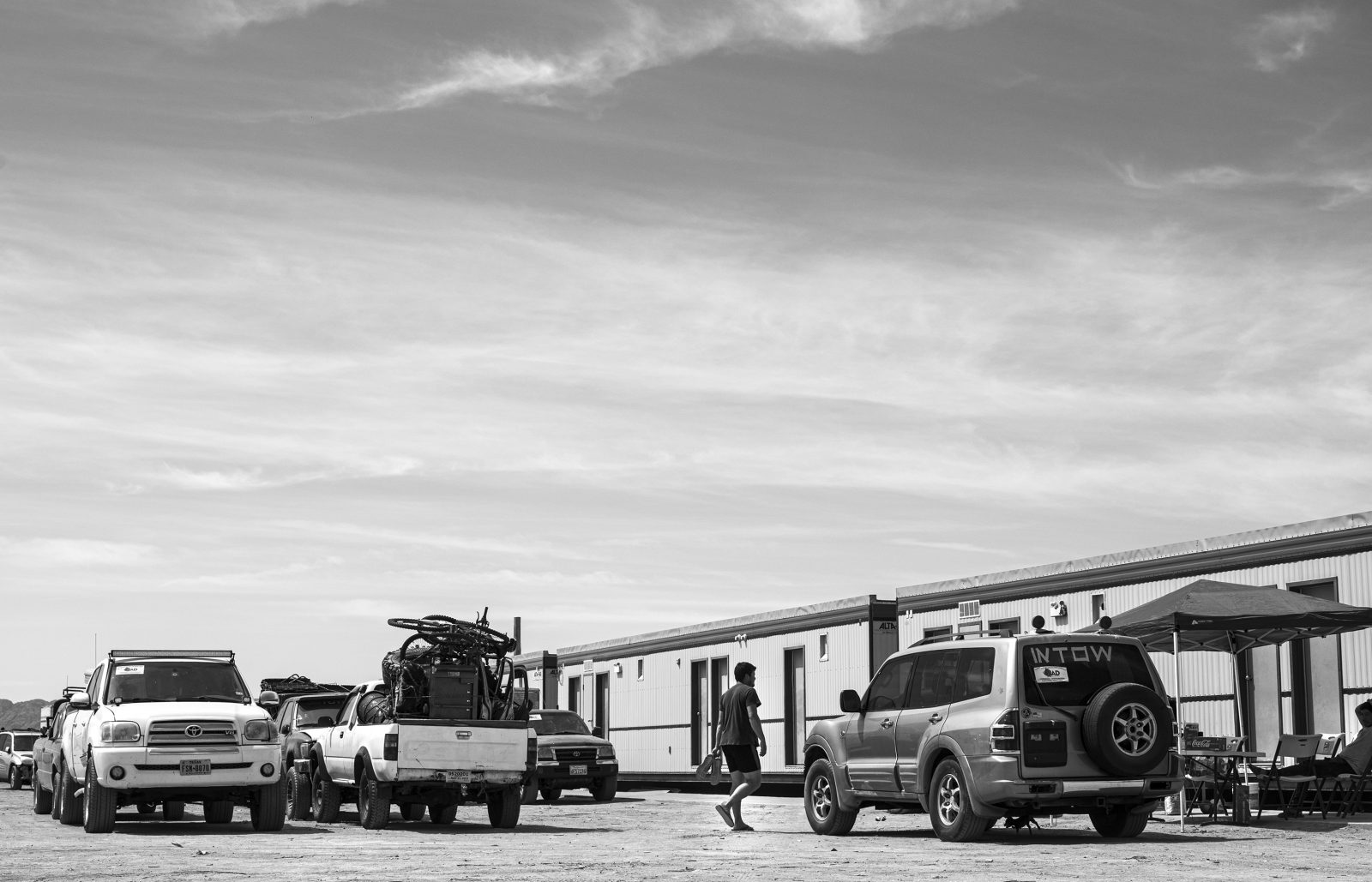 Photo by Maisie Crow / Servicios Aduanales del Desierto opened a parking lot last month to cater to incoming transmigrante traffic in the region. The lot boasts a large area for parking as well as portable buildings to provide rooms for the traveling merchants to use while they wait the typical 72 hours for their paperwork to be approved before crossing into Mexico.

Mexican officials have discussed the new transmigrante since 2017. Customs brokers Yuri Valdez, of Ojinaga, and Erick Prieto, of El Paso, the co-owners of SAD, began working with Juan Carlos Loera De la Rosa, now a candidate for Governor of Chihuahua, in 2018 to get the route approved. It was put into action with the help of Mexican President Andrés Manuel López Obrador and officially opened on March 23 of this year.

On the U.S. side, Presidio officials sought help from the state and federal government to plan for the route and take advantage of potential economic benefits, but those efforts largely came up empty. According to Presidio Mayor John Ferguson, it was nearly impossible to garner support for the city’s interest from state or federal officials. City officials were often left to their own devices in determining how to handle the new route.

As The Big Bend Sentinel previously reported in 2019, Presidio Mayor John Ferguson took a fact-finding trip to Los Indios and came back unimpressed, concerned about the potential for increased traffic on U.S. 67. He also worried that left unregulated, transmigrante parking lots would pop-up all over the city. He sent a letter to U.S. and Mexican officials urging them “not to pursue [a] transmigrante corridor at Presidio/Ojinaga.”

The city passed an ordinance in November 2019 to address concerns with the potential new route. It prohibited transmigrantes from sleeping in their vehicles and regulated transmigrante parking to city approved and permitted lots.

Initially, the city sought to build a municipally-owned transmigrante parking lot in the city’s commercial district, but after a series of heated debates and staunch opposition from H. Cowan, a representative of Solitaire homes, it never materialized.

Citing limited capacity on U.S. Highway 67, the delayed Presidio-Ojinaga International Bridge expansion and a lack of facilities, in March 2020, the city did what they could to stop the route from opening and passed a resolution opposing “outbound transmigrante traffic crossing at our Presidio-Ojinaga International Bridge for health and safety reasons.”

“Our number one concern is the highway traffic,” Ferguson said.

When Prieto and Valdez set out to build SAD, they found land just outside of the city limits. They wanted a facility that not only offered parking for the traveling merchants but also provided accommodations and kept them entertained and fed while they waited the approximately 72 hours for their paperwork to be approved –– including a document of every item being transported which is checked again upon exiting Mexico.

Servicios Aduanales del Desierto is currently the only lot in the region to service incoming transmigrantes.

“The main objective of this project is to be different from the project in Los Indios,” said Guillermo Prieto, administrator and manager of the SAD parking facility project. “We’re offering transmigrantes a free place, a decent place. Over there [in Los Indios] they stay in their cars all night.”

The facility sits just outside of Presidio on U.S. 67 and boasts ample parking, portable buildings housing 25 rooms, each with two twin beds, and another several buildings that house a commercial kitchen, shower facilities, a game room and a television lounge. Outside, there are plans for a basketball court and an area for grilling. All of it comes at no extra cost to the transmigrantes, who can use the facility freely.

The parking lot will eventually have a perimeter fence and video surveillance and SAD plans to staff the site with approximately 30 employees.

Right now, the lot lacks running water and access to a sewer, something likely to be alleviated in the coming months by an ongoing City of Presidio water improvements project nearby. In the interim, the lot relies on porta-potties and a septic system.

For drivers, this route offers other incentives too. If they are coming from the West Coast they save several hours in travel time to arrive at the port as well as the money they’d spend on gas and accommodations. Plus –– for the time being –– it costs around $250 to cross in Presidio, whereas crossing in Los Indios is upwards of $500. 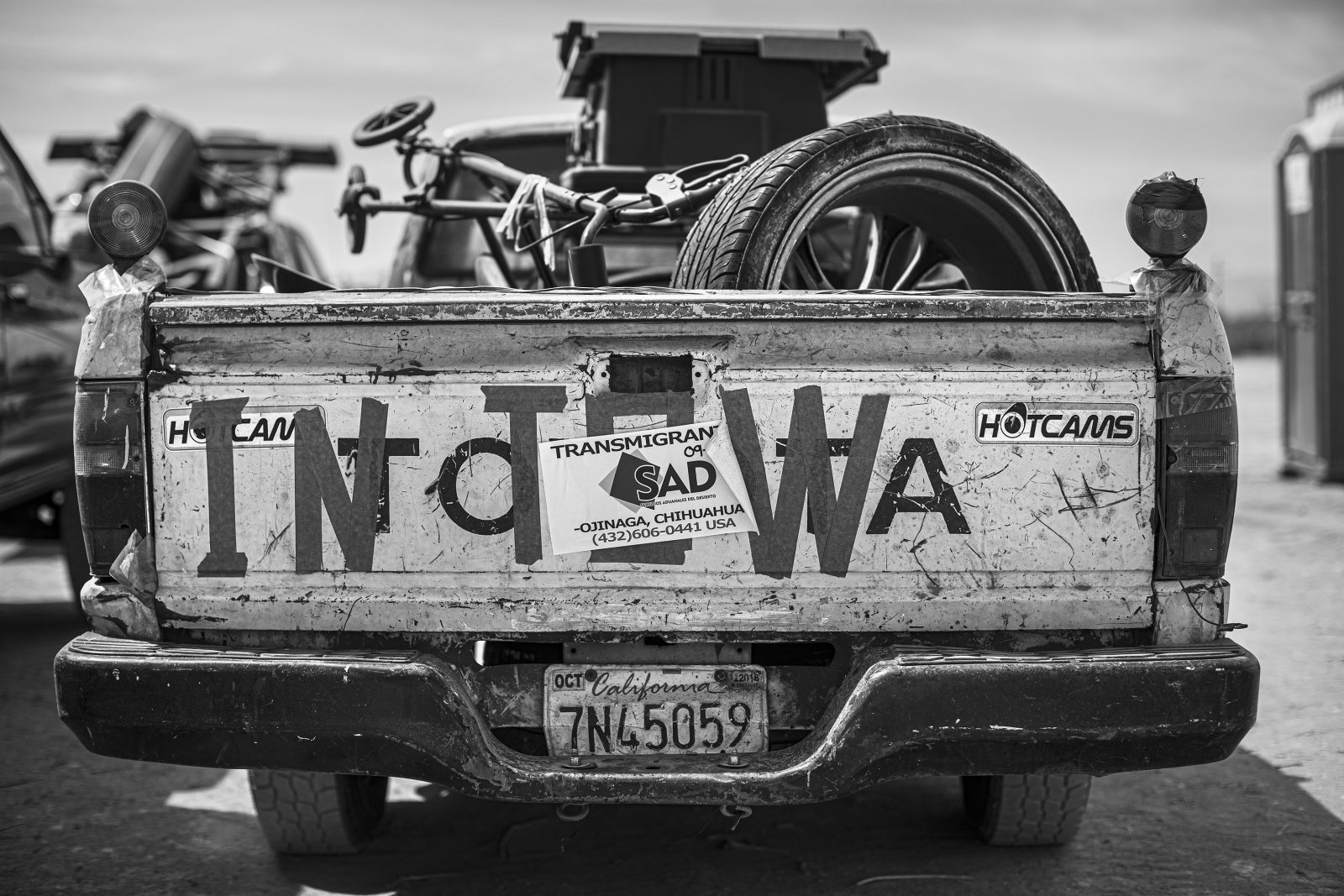 Photo by Maisie Crow / The back of a Toyota pickup truck being towed by a transmigrante is marked with a large sticker from Servicios Aduanales del Desierto that serves as part of an internal system for processing goods to be transported.

“Another thing, they are tired of the corruption in the [Mexican] state of Tamaulipas,” Guillermo said. “They pay for the broker in the U.S., then they cross the border, and then all through Tamaulipas, state police ask for money.”

The federal government of Mexico even released a promotional video espousing the new route, even saying that the inhabitants of “Ojinaga, Camargo and Jiminez will benefit from the economic outpouring.”

“We already have people that are coming through for their second time,” said Guillermo.

“There’s a misunderstanding of transmigrantes,” Erick said. “Many of these people are U.S. citizens.” He went on to add, “These are people with money. They are buying merchandise in the U.S. to bring through Mexico” and sell in Central America. 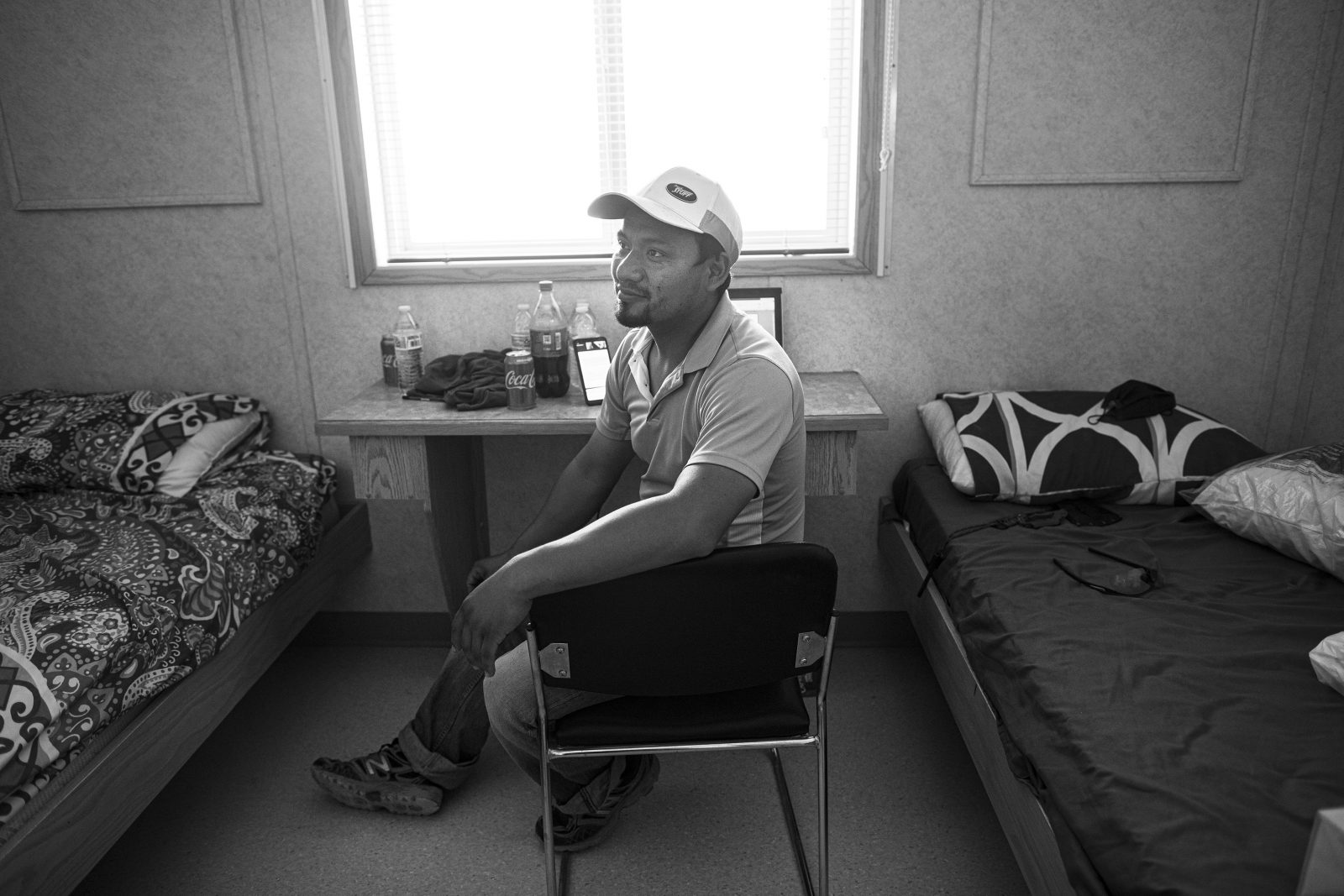 Photo by Maisie Crow / Cristian Ayala takes a break from doing homework in his room in the parking facility at Servicios Aduanales del Desierto. Transmigrantes wait around 72 hours for their paperwork to clear before being able to cross into Mexico. Ayala, of Guatemala, uses that time to study. He is currently pursuing a bachelor’s degree in business administration and economics.

Last week, transmigrante Cristian Ayala was waiting in Presidio for longer than he had anticipated. There was a title mixup with one of the vehicles he had purchased in California, and he was waiting for the correct one to be sent before he could cross.

Ayala is currently pursuing his bachelor’s degree in business administration and economics online. Some of his time waiting was spent doing homework. “It’s real nice, I didn’t expect this type of room,” Ayala said about SAD’s facilities. “They have the space for me to work on my laptop and everything.”

Ayala had seen reviews of SAD on Facebook, and some posts had mentioned a shorter, straighter route. Most importantly, there had been no reports of corruption. For Ayala, that made this route better.

“There is a promise from the Mexican government. If they see that this project runs [well], they are going to close Los Indios,” Erick said.

Currently, CBP is only allowing transmigrantes to cross from 10 a.m. to 1 p.m., though Guillermo anticipates that those hours will have to expand once more transmigrantes arrive. Currently, travelers line up next to a sign on the shoulder of U.S. 67 in front of Poncho’s Pizza, just outside of the port of entry, that reads “Transmigrante staging here.” According to a spokesperson for TxDOT, CBP is currently responsible for coordinating transmigrante traffic.

“Their presence in Presidio has been a plus to this point,” Ferguson said. “But one thing they can not control is that once they come into town [as they prepare to cross] they have to stop first” and wait on the shoulder.

“They’re in communication with the port of entry,” he said, “and they do it in groups.”

By contrast, in Los Indios, there is a designated parking lot for transmigrantes preparing to cross. “We don’t have those facilities in Presidio. It’s not a big problem but it potentially could be and right now, we are just kind of improvising,” Ferguson said.

“If it’s authorized and it’s going to happen, then we need to accommodate everybody as best we can,” he said.

“When we cross, if everything is good, I’m going to start coming this way,” said transmigrante Carlos Rivera as he loaded his vehicle last week. “Believe me, this town is going to grow a lot.”