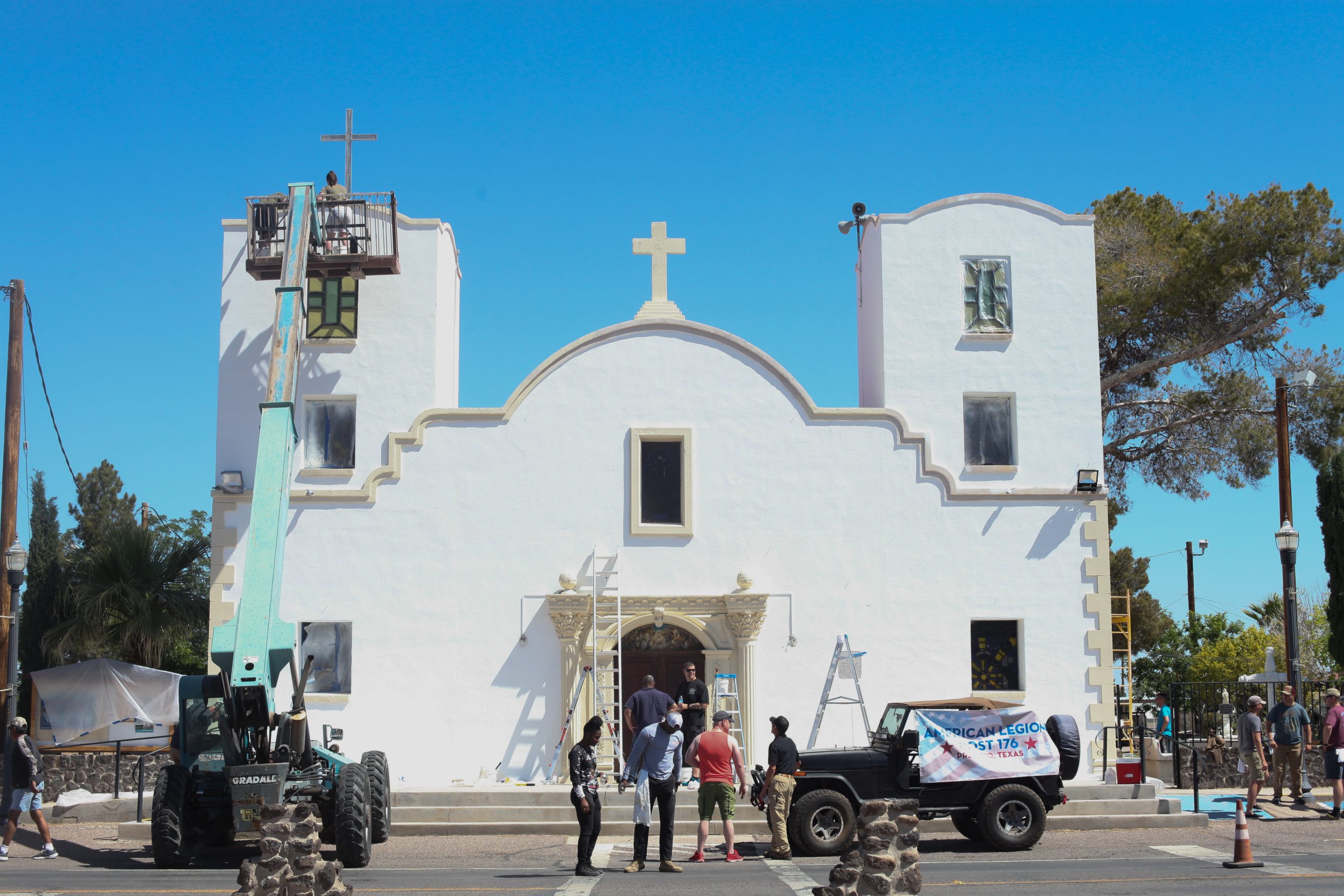 Photo by Hannah Gentiles for The Presidio International / Joe Portillo, Commander for the American Legion in Presidio & Volunteers from the National Guard add the final touches to the Santa Teresa de Jesus Catholic Church during an American Legion community service event.
Subscribe

Joe Portillo, newly-elected commander of Presidio’s American Legion and former city of Presidio administrator, walked through the event and gave an update on the progress of Post 176.

An estimated 15 members of the 922nd EVCC, Engineer Vertical Construction Company, National Guard volunteered their time and skills for this event. Portillo explained that members of this engineering battalion, based out of Gonzales, Louisiana, all possess various engineering and construction skills.

According to 1st Sgt. Joe Darwin, during their year of deployment here in the area they have found themselves doing a lot of similar volunteer work, and had, specifically, helped with the renovation of the American Legion before this project. “We are always glad to help out,” he said.

This will be the first community service event of many to come, said Portillo. He went on to explain that the American Legion constitution states that members of the American Legion “serve our country, serve the American Constitution itself and the United States of America.” Most important for their post, Portillo added, is serving the community. His ultimate goal is to figure out ways in which Post 176 can best serve Presidio. 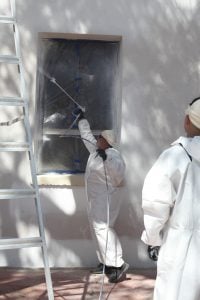 Over the past two years, the American Legion building has had an impressive facelift following a couple decades of closed doors. The American Legion in Presidio was first established in the early 1900s, but shuttered for about 25 years prior to its recent resurrection.

With donated funds from the Presidio Municipal Development District, the city of Presidio, a creative use of recycled materials and many volunteer hours, Post 176 is well on its way to opening its doors. Portillo said that the building is about 80 percent ready to open to the public. With plans to become a functioning bar, restaurant and event space, obtaining the proper licensing, designing a steady menu and wrapping up miscellaneous small projects is all that remains.

All of the proceeds from the venue will go towards community service efforts. Portillo explained that this would include more events like painting the church, scholarships, helping elderly community members and any other need that arises.

Portillo expanded on the importance of helping the large elderly population, saying that, culturally, people in Presidio are less likely to go to nursing homes or to be put into care facilities by family members, leaving a lot of room and necessity for assistance from the community.

As he walked through the renovated space, Portillo pointed out the various displays of historic artifacts from Presido’s rich history, and he identified the numerous ways in which they’ve upgraded the space. The interior includes a game room, kitchen, modern bar and a number of fine-crafted tables for dining. Behind the building is a covered porch, outdoor bathrooms, grills and additional space for gathering. This is very important to Portillo, who wants people to see the space as a refuge, where they can both come and get assistance if they need it, as well as have a place to relax and spend time with other community members and vets from the area.

Portillo explained that they have already hosted two funeral services for local vets in the newly renovated building. A funeral service was held last month for the Legion’s oldest World War II veteran, Ramon Ontiveros Mancha, who was 101 when he passed. The Legion invited his family and friends for a meal and 150 people showed up in memory of Mancha. “It was beautiful!” he recalled.

Though the Legion’s goal is to open their doors to everyone, Portillo is concerned that community members may not feel fully comfortable entering into their building given the nature of the name and assumptions about needing to be a vet themselves in order to be welcomed. He noted the specific challenge of being located on the border between the U.S. and Mexico.

“One of the things that worries me the most is that people have a perception that it’s an American Legion, and you’ve got to be a veteran to come in. And that’s not the case. The case is: have you ever had a family member that’s a vet? Do you support the military? Then yes, you are welcome any time,” Portillo said. Despite those challenges, he believes that, in time, they will be able to create an atmosphere that allows all people coming into their doors some comfort, thus allowing the American Legion Post 176 to continue to help out the community of Presidio in increasing ways.