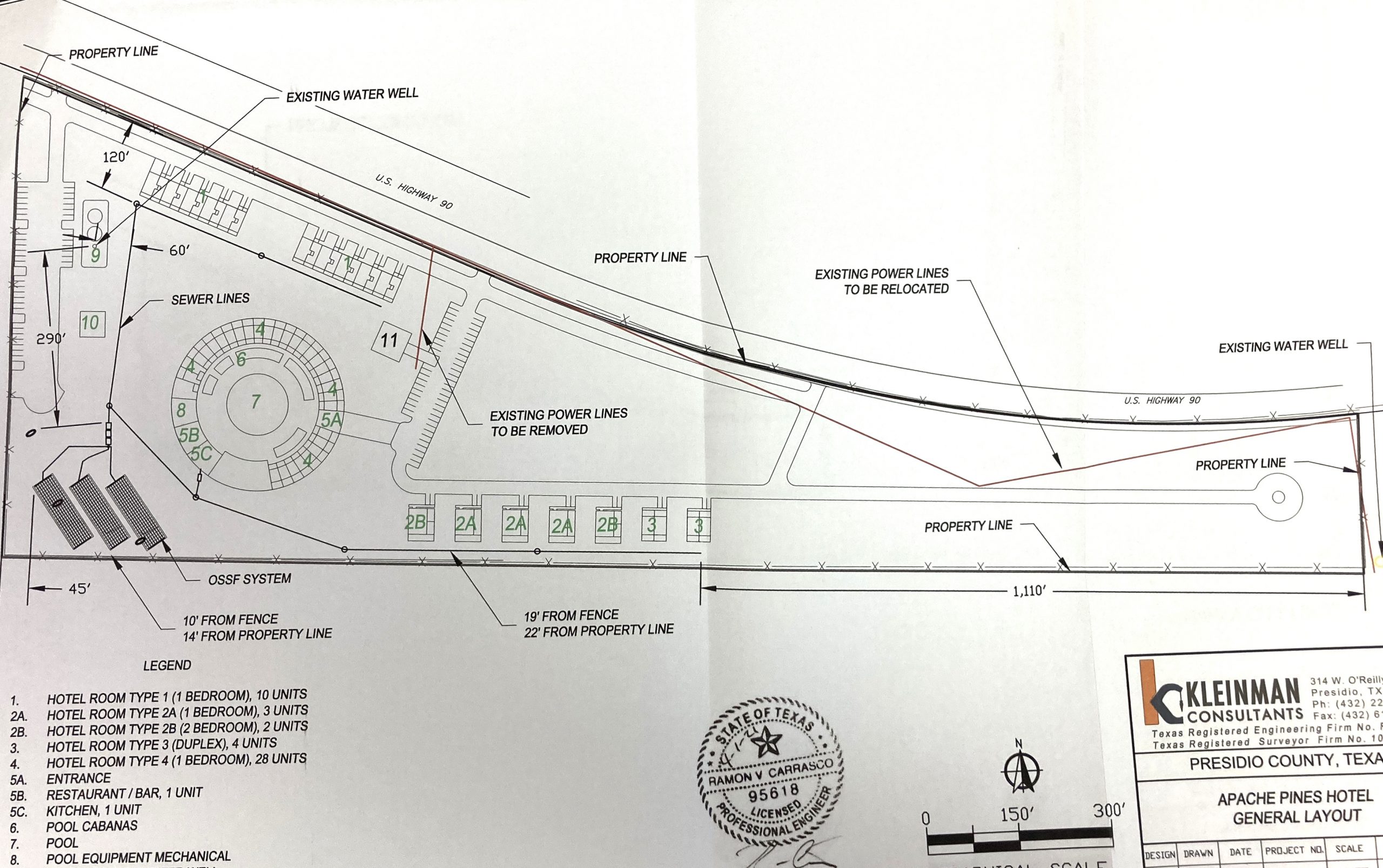 Photo by Sachi McClendon / A map of Crowley’s proposed complex just outside of town that will feature a hotel, pool and spa.
Subscribe

MARFA – Marfa businessman and hotelier Tim Crowley plans to construct a new 47-room hotel – complete with a pool and spa – just outside city limits, according to design schematics obtained by The Big Bend Sentinel through an open records request. The hotel is slated to be built on 21 acres of land on U.S. Highway 90, which was previously home to the Apache Pines RV Park and the old Stardust Motel.

According to the map of the hotel, the majority of the guest rooms will be connected in a coliseum-like structure, which will enclose the 60-person pool and the attendant cabanas. This main circular building will also house a bar that will serve “fast food” and seat up to 60 guests.

Toward the back of the property will be seven standalone hotel rooms, which are all connected to a road running throughout the complex. Four of those rooms are slated to be duplexes with one bedroom each. Then at the front of the property, butting up against Highway 90, are another 10 rooms. There appear to be only two rooms, out of the 47, that have more than one bedroom.

Before building can commence on any property in the county, landowners must submit an application to the county judge that outlines how they plan on managing their sewage. As this property is outside of city limits and the nearest sewer line is 2,850 feet away, Crowley submitted a plan to construct three septic tanks, holding a combined total of 6,000 gallons, toward the back of the land that will serve all of the hotel’s wastewater needs.

The engineering firm Kleinman Consultants, based in Presidio, prepared the septic-tank application in early April of this year and the county gave its stamp of approval on the design later that month. Crowley has one year to construct his septic tanks, according to the permit he was granted. If he doesn’t have the tanks inspected by the county once they are nearing completion before April 26 of next year, he will have to start the application process anew.

Now that he has this permit though, Crowley could begin constructing his new hotel right away. He could not be reached for comment to say whether he had in fact begun the process, however.

Ramon Carrasco, who designed the septic tanks system, said he didn’t think that any construction had begun on the property. He did say that Crowley was asking around for a builder though.

The application does hint at a couple of possible working titles for the new hotel. At the bottom corner of the map, the complex is described as the “Apache Pines Hotel.” But then on one page of the application, there’s mention of a “Stardust Marfa,” which is a reference to the iconic neon sign that sits on the property. The sign is the only physical reminder of the Stardust Motel that was razed some years ago.

According to the application, the hotel is expected to produce an average of 4,986 gallons of wastewater per day. Even though there are two wells on the property, the hotel and pool will use water supplied by the city. Marfa’s interim public works director, Chuck Salgado, said that there’s already a city water line that runs along the property that the old RV park used to tap into. Salgado said that the infrastructure is there to bring the thousands of gallons of water per day out to the hotel, but that no one has reached out to him to link the city’s water line up with the hotel’s. “We got some plans a while back, but we weren’t sure if they were going to go through with it or not,” Salgado said.

As The Big Bend Sentinel reported in early 2019, the commissioners court granted Crowley a permit to serve alcohol until 2 a.m. at this property. In that meeting, Crowley hinted at wanting to build a hotel, saying that it could be a $10 million dollar investment. His goal was to eventually host weddings, conferences and “yoga retreats” at the property. “Ultimately, I’ve got enough space there that you could build another whole complex,” he said.

In the same story, the hotelier talked about building a reception area, saying, “It has one thing that looks kind of like a chapel, and then it has a shade structure.” On the hotel map, there is a building described as “reception,” however it’s unclear if the building will look the same as Crowley described in the meeting.

Minerva Lopez, the director of the city’s tourism board, did not know much about the proposed hotel. “We heard there was going to be something there, but not recently,” she said, adding, “We don’t know anything else because it’s out of the city limits.” Lopez did say that she welcomes any project that brings more hotel rooms to the area, as there are only 205 in town right now.