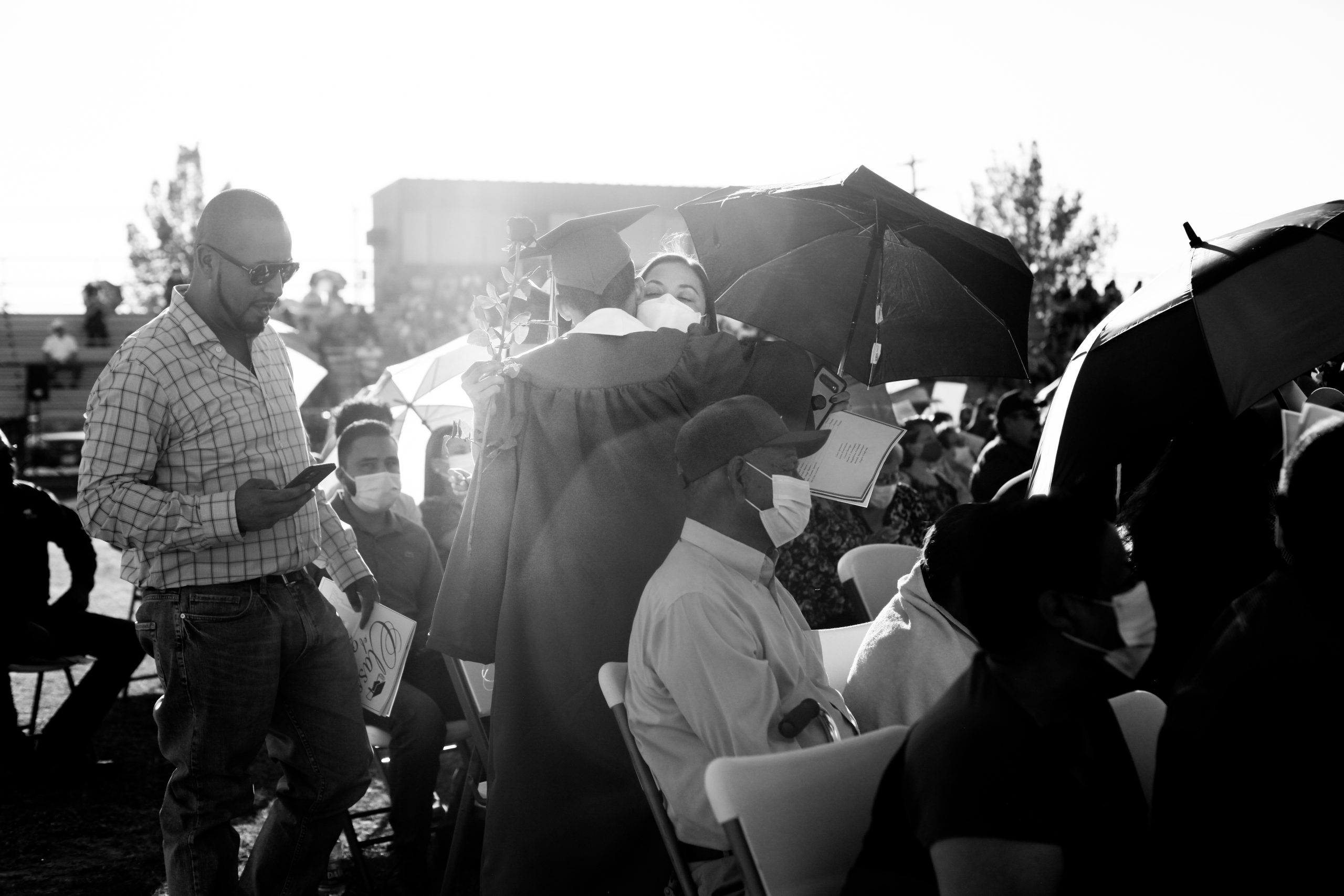 PRESIDIO – In the hours leading up to the 2021 Presidio High School graduation ceremony, Nazaria Perez Escontrias – who lives in Ojinaga – didn’t know if she would be able to see her son, Marco Rey, graduate in person. In the early days of the pandemic, the federal government placed restrictions on nonessential travel through the port, barring Perez Escontrias from freely traveling between the U.S. and Mexico.

“I felt very helpless and sad about not being able to be with Marco and very disappointed in the lack of understanding from the immigration authorities,” she said.

As is the case for many other border communities, some students attending Presidio High School have family living in Mexico who have come over to attend the ceremony in years past. Presidio Mayor John Ferguson said there were at least nine kids who asked that their families be able to come over this year.

In an email exchange days prior to graduation, U.S. Customs and Border Protection officials said that they had made accommodations for 35 other graduation ceremonies, but that the agency had not received a request from Presidio ISD. Roger Maier, a spokesman for CBP, said that the superintendent or principal must address a letter to the El Paso Field Office requesting an exemption.

CBP officials said they only received a request from the school to open the port on Wednesday, two days before the event. The school principal, Hevila Ramos, said that she wasn’t in communication with CBP, and that it was Mayor Ferguson and City Judge Viviana Cantaño who were the ones leading the charge to open the border.

Then on Friday, just hours before the ceremony, the mayor received word that families in Ojinaga would be allowed to come over, and Marco’s mom made it in time to see him graduate in person. “I was nervous I wouldn’t cross, and I felt such relief and all of my sorrow disappeared,” she said. “Thank you so much to the mayor of Presidio, to the council, to the consulate who worked so hard, and thanks to the media.” 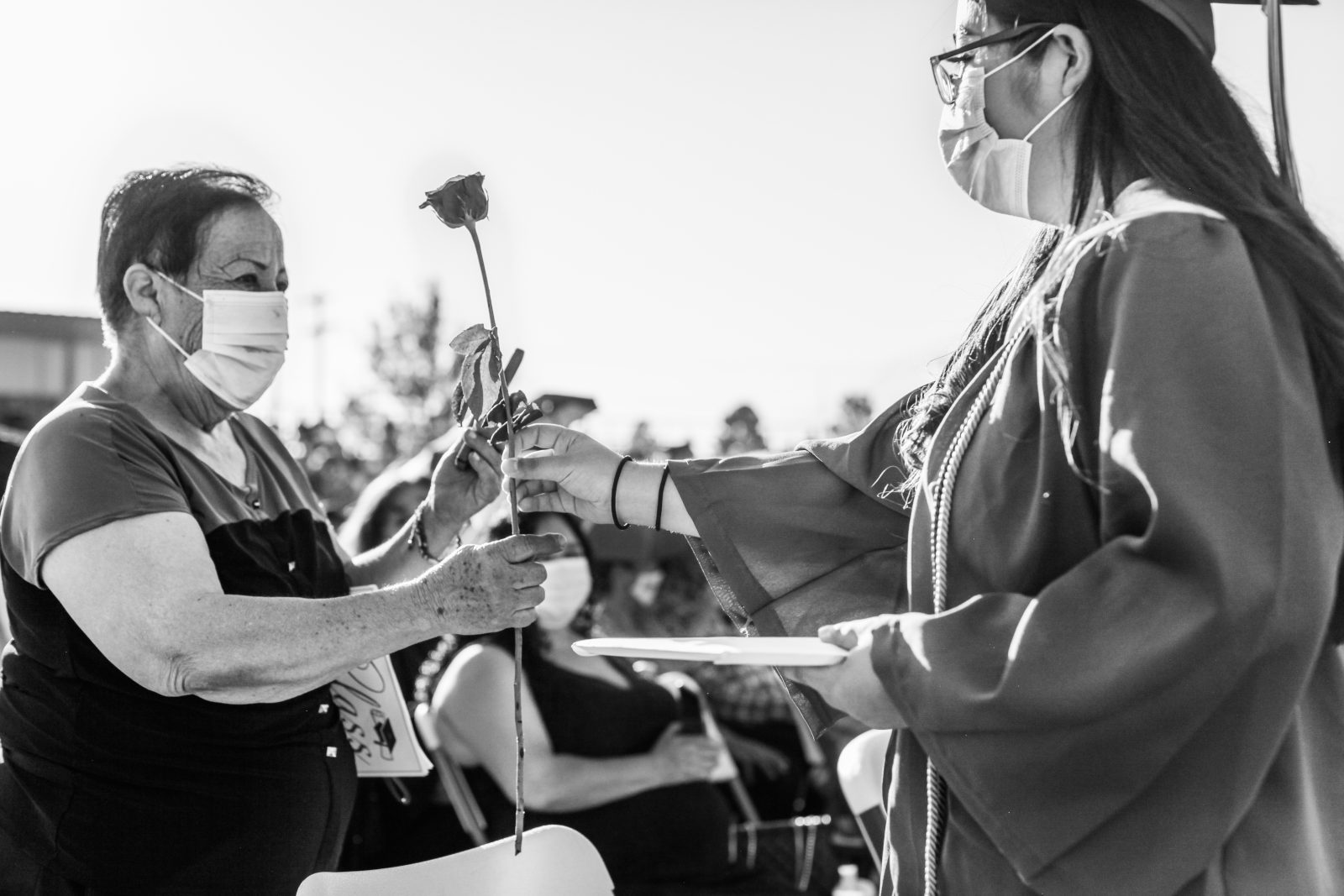 Photo by Hannah Gentiles for The International / Kaelah Carbaajal handing off her rose right after receiving her diploma.

This year’s ceremony began at 6:30 p.m. as the graduates walked half the distance of the track, passing their families who clapped and cheered for them. All 90 of the students in the graduating class were dressed in matching blue caps and gowns, and a number of them had decorated their caps with glitter and flowers.

This year students were only allowed to bring six family members to the ceremony, which was held at the Manuel O Hernandez Memorial Stadium. The crowd was separated into two groups: parents were given seats next to the students on the field, while other family members and friends were ushered onto the bleachers. With temperatures breaking 100 degrees, many parents brought umbrellas to stave off the heat, while others fanned themselves with their graduation programs.

Minutes before the commencement ceremony, graduate Arian Perez Ramos was rehearsing the opening prayer he was to recite that would kick off the ceremony. He was eager, yet anxious, to give his speech, as he saw it as a chance to thank his family for all the sacrifices they made that allowed him to graduate. “I don’t see graduation as a goodbye, but more of a celebration, to thank everyone for leading us here to where we are,” he said.

Perez Ramos is going to attend the college of engineering at University of Texas at El Paso next year. “In the meantime, I plan on working, and socializing a lot, just having those special moments for the last time,” he said.

More than anything else, Perez Ramos said he was going to miss the lunch ladies at school. “Seeing them every day for four years, it was a very tearful goodbye. I even told them I considered them as my aunts.”

Eric Turner, a social studies teacher, said that he was really impressed with this cohort, particularly with the way they helped him through a challenging year. “I had them when it was the year that I thought would be the year from hell. I had seven classes, 140 students. I had most of these kids that year, and they were great,” he said. “I always like graduation. The old graduations used to be epic, they were like three-hour events, but we’ve paired it down. Kids wanted to get on to the festivities.”

There were a number of speeches given prior to the roll call, and most of the speakers alternated between Spanish and English. The salutatorian, Alejandra Valles, showered praise on her fellow students, saying, “Let me tell you how cool my class truly is: Graduating here today, we have athletes, performers, photographers, scientists, singers and many students that have placed Presidio on the map at the state and national level.” This year’s valedictorian, Kaztenny Madrid, noted how she was the first Presidio High School graduate to earn her associates degree through the early college program.

COVID was brought up, of course. Superintendent Ray Vasquez said in his speech, “Congratulations to the Class of 2021, you got through a year of quarantine, Zoom classes, masks, nasal swabs and much more than anyone could ever have imagined.”

This year’s guest speaker was Janet Nieto Montoya, who is currently a material chemist for an automotive lab in Detroit. Nieto Montoya attended Presidio High School in 2007 where she graduated top of her class. She had some words of advice for the students entering their next stages of life: “Take on a load that is challenging, but not overwhelming. The key here is to pace yourself with the right balance to keep yourself suitably challenged while keeping your head above the water.”

After the roll call, the graduates all sang the school’s alma mater for the last time as students of Presidio High School, and as Macklemore’s “Good Old Days” played, the students gathered in a circle and sent their caps flying into the air – a sure sign of a graduation done right.