Staff photo by Maisie Crow / Marfa and Ft. Davis volunteer firefighters work to put out a fire at the Judd Architecture Office early Friday morning. Around a dozen firefighters responded to the scene and were able to contain the fire by 7 a.m. and kept the fire from spreading to other buildings.
Subscribe

MARFA – In September 2018 the Judd Foundation began renovating a 5,000-square-foot building in the middle of town that the late artist Donald Judd used as his architecture office with a living quarters on the second floor intended for guests. The plan –– budgeted at $2,000,000 – was to open the first floor to the public, showcasing some of Judd’s architectural designs, while the second floor would include the fully-restored guest space.

The renovations were a slow, painstaking process. “In order to repair and restore a lot of the components of the building, it’s done by hand by craftspeople locally. It’s not like anything we can just buy off the shelf,” said Troy Schaum, whose architecture firm has been working alongside the Judd Foundation. “It’s made very lovingly.”

Prior to the restoration project, the Architecture Office was only open during select Community Days and Chinati Weekends. However, it was slated to be added to the Studios Tour this fall –– making it more accessible to visitors.

The restoration was set to be completed next month in July, opening up to the public this fall. 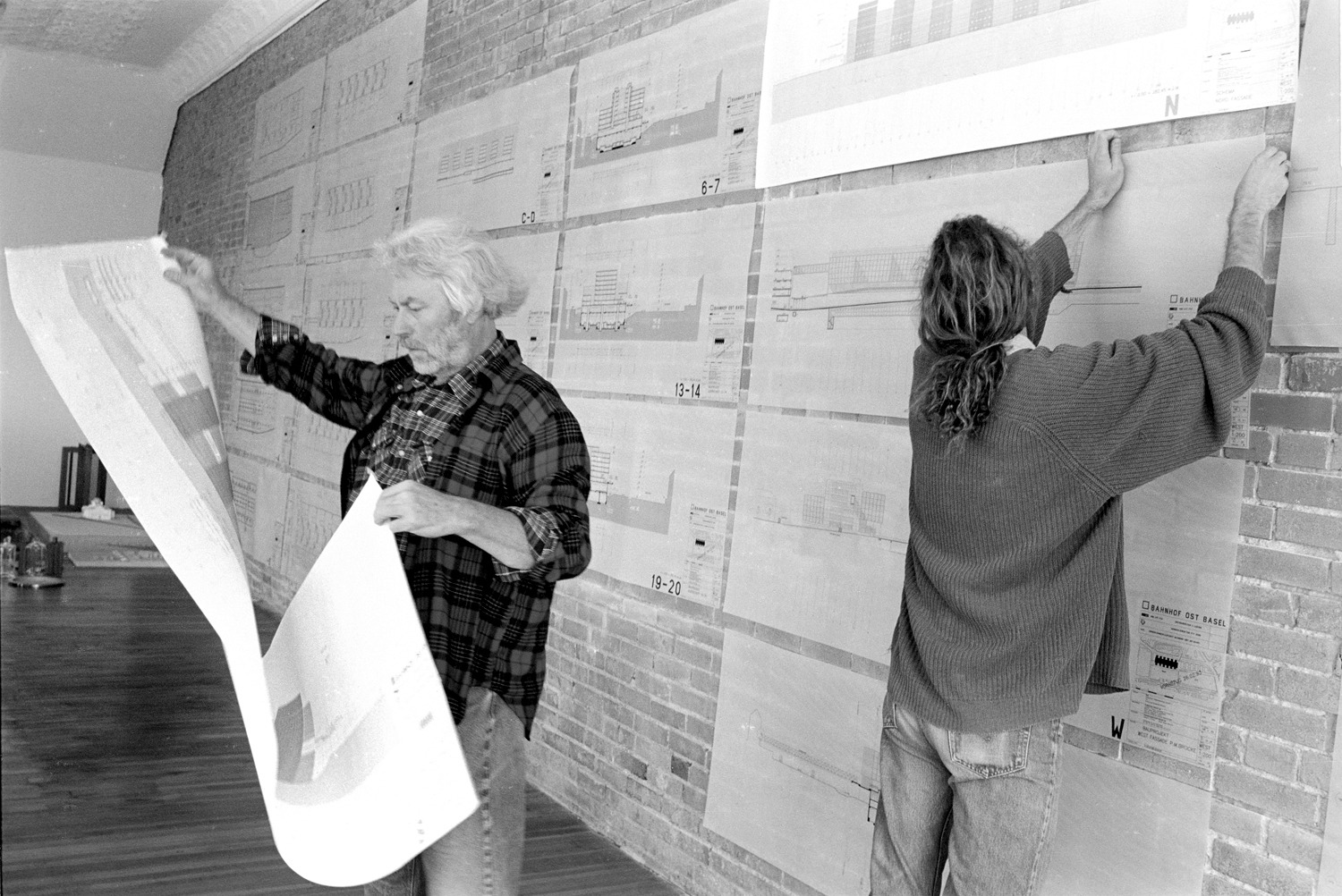 Then, in the early hours of Friday morning, years of meticulous labor burned to the ground. A fire broke out inside the building around midnight, eventually setting the roof ablaze. The middle section of the second floor caved into the first. Inside, construction materials and equipment burned black.

“It’s a total loss for the most part. The building is basically gutted,” said Gary Mitschke, the chief of the Marfa Volunteer Fire Department, on the morning after the fire. “They had a top-of-the-line sprinkler system and alarm system that wasn’t hooked up quite yet, which is really unfortunate because it probably would’ve saved the building.”

“While we are assessing what was lost, we are focusing on what was not lost,” said Rainer Judd, the president of the Judd Foundation. “We did not lose any lives or other buildings in Marfa. We did not lose any artwork, objects or furniture that was installed in the building.”

The police department was first alerted to the fire around 12:30 a.m. by Jesus Ortiz Sanchez, a recent graduate of Marfa High School. “I was just cruising near the car wash, I had turned to the left and I just saw a lot of smoke. So I passed through there. I rolled down the window and it smelled like burnt wood,” Ortiz Sanchez said.

Once the fire department arrived and began opening the windows, Marquez said he could see the flames on the first floor of the building. “Then it traveled up and you just saw the second floor caught on [fire],” he said. Marquez even witnessed the second floor cave into the first, saying, “Once they started opening up these bottom windows, taking the plywood down, you could see the pieces of wood just falling.”

Lonnie Hebert – a volunteer firefighter with Ft. Davis – was about eight miles out of town on Highway 17 en route to the scene when he first encountered the blaze. “When we topped the hill there where you can start seeing the [Village Farms] tomato farm, we could tell it was fully involved and they had a hell of a fire going on,” Hebert said.

Hebert and two other firefighters with Ft. Davis arrived just after 2 a.m. They first tried to tap into the fire hydrant directly across from the burning building. “We grabbed that fire hydrant, got the truck hooked up, started to open the fire hydrant, but we could never get it open,” he said.

The stem on the hydrant was fastened too tight. “It took three men to even budge the thing,” Hebert said. “We turned it probably two rotations, and I finally said ‘we’re going to twist this stem off if we continue.’”

Hebert’s crew then had to pivot and tap into a hydrant a block away on Dean St. and Oak St. “That cost us probably 20 to 30 minutes of time getting water on that fire,” Hebert said. According to records obtained by The Big Bend Sentinel, the last time the city’s fire hydrants were inspected was in October 2019, over a year and a half ago. Mitschke, the fire chief, said that the hydrants are usually checked twice a year, but the pandemic threw the inspections off course.

Mitschke said that the delay wasn’t too detrimental to getting the fire under control, which they managed to do by around 7 a.m.

At this point, the cause of the fire is unknown. “The state fire marshal is not coming out at this time. Their recommendation was to have the insurance company send their own investigators. So that’s the plan,” Mitschke said. “We’re keeping the scene secure until their investigator can come in and do their investigation and hopefully make a determination.”

“It’s quite a costly fire for the Judd Foundation, and I just want to make sure that everything is the way it needs to be for claims or anything they might have,” Mitschke said.

The two buildings connected to Judd’s Architecture Office were spared the worst of the fire, but did sustain smoke and water damage. The owner of the Wrong Store, Buck Johnston, said she got word of the fire around 5 a.m., only after the firefighters had managed to somewhat quell the blaze. “I was so glad we didn’t get there any sooner, because I think we would’ve lost our minds. I think the stress would’ve just driven us insane,” Johnston said. 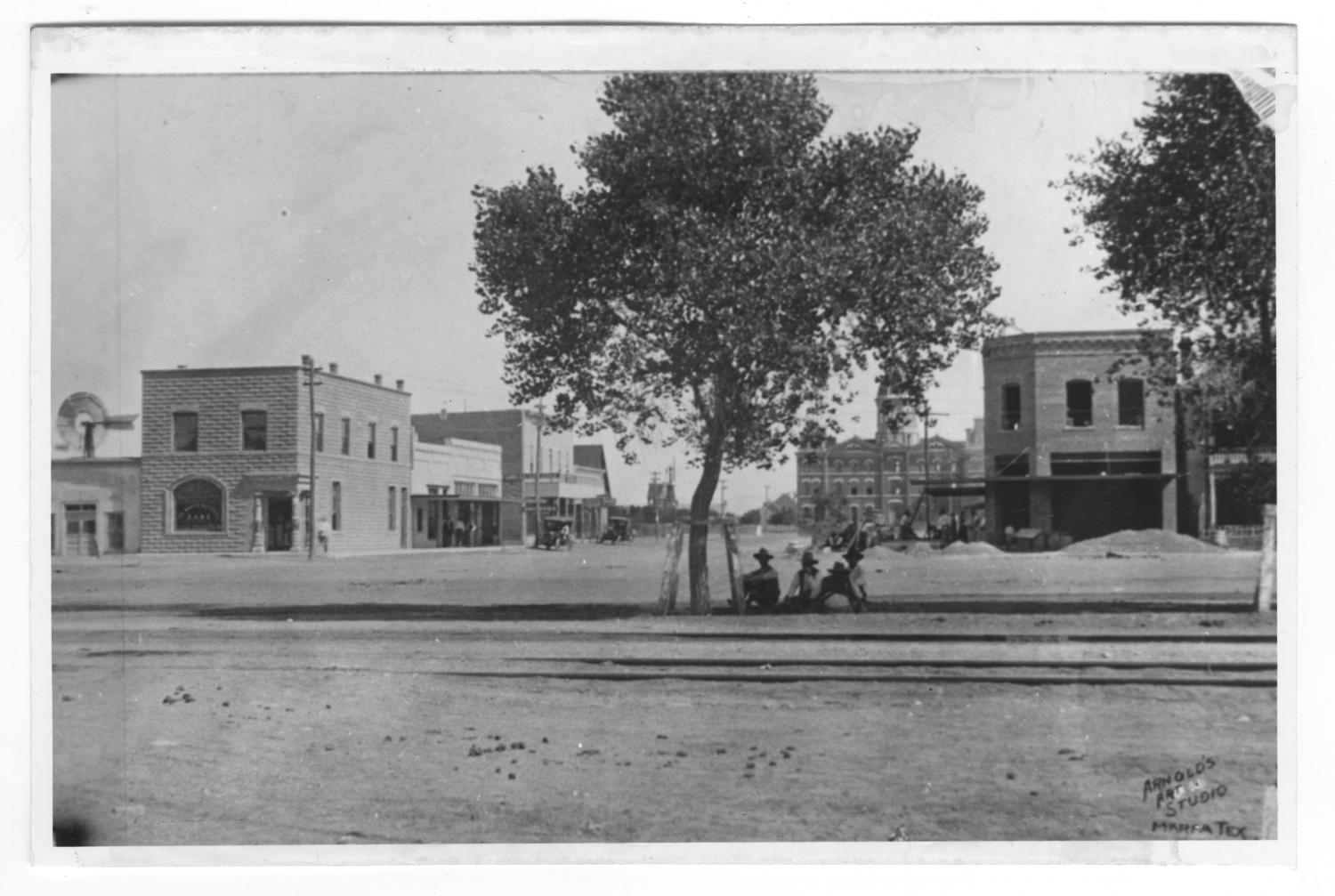 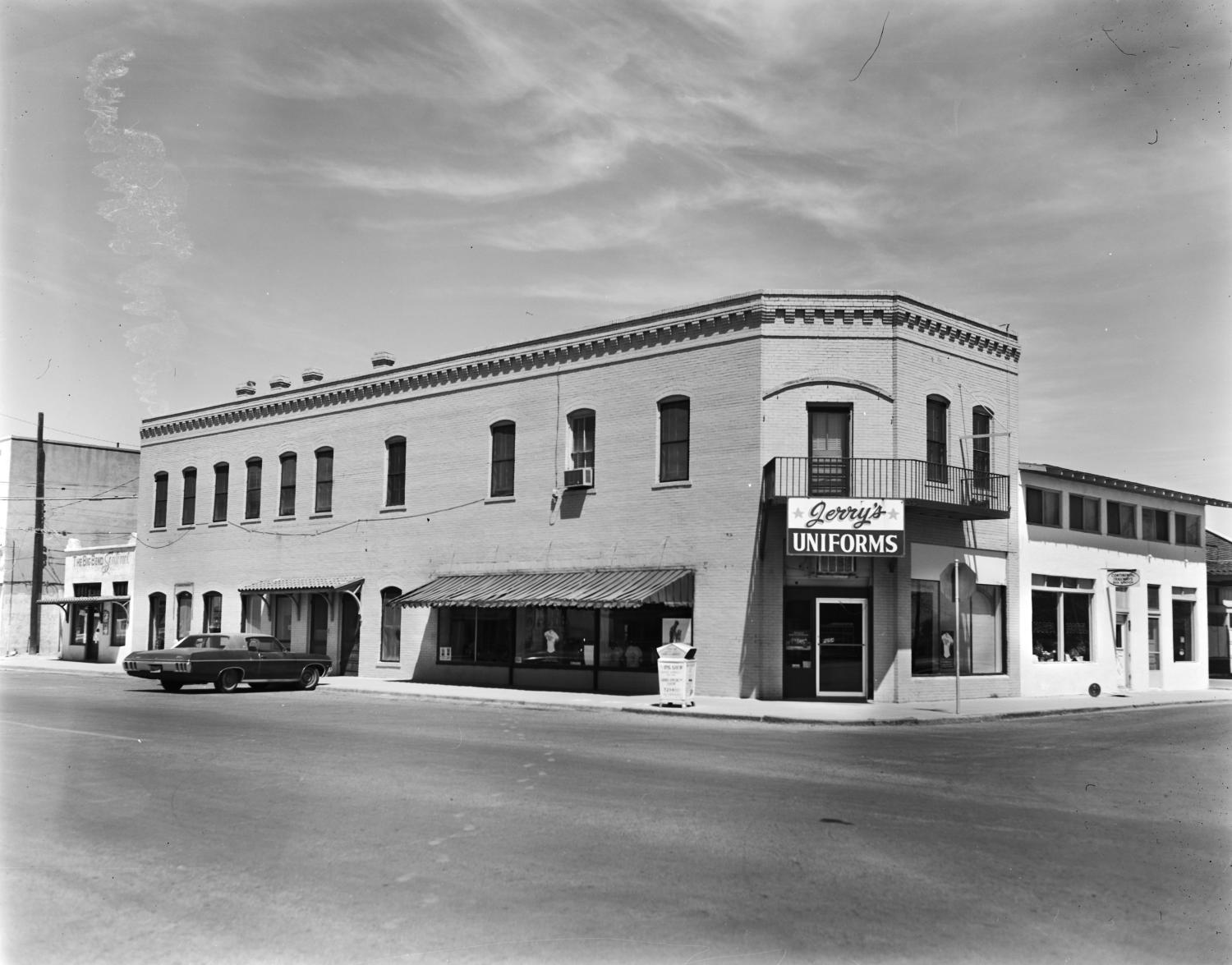 Photo by de Teel Patterson Tiller, courtesy of Texas Historical Commission / The Glasscock Building in 1978. The building housed a number of commercial businesses over the years, including Jerry’s Uniforms. 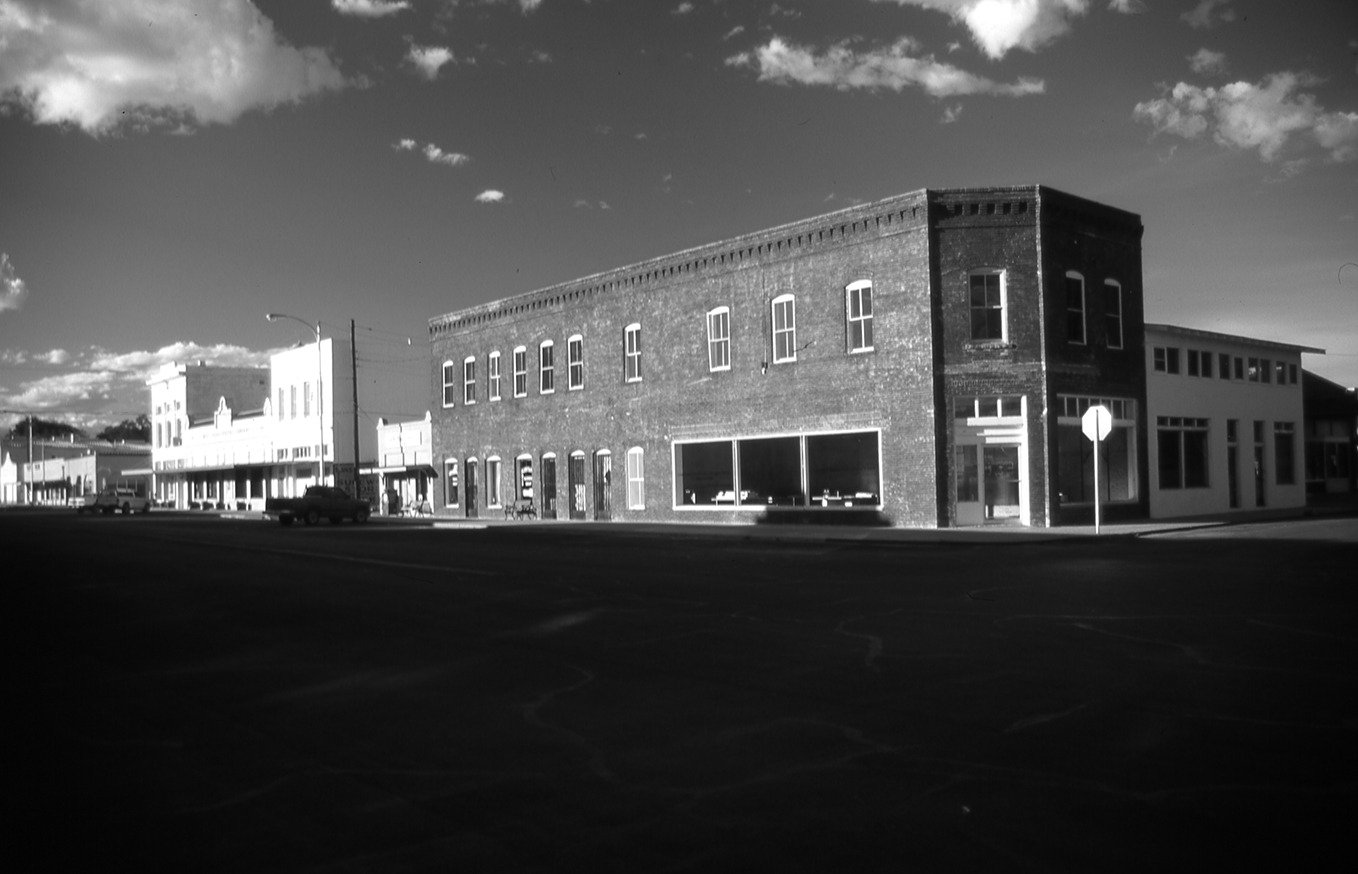 The Glassock Building, as it was formerly known as, was constructed at the turn of the century and housed a number of shops over the years. Judd bought the building in 1990 and set up his architecture office on the first floor and turned the second into a living space.

The foundation began renovating the outside of the building in September 2018, the first phase in a multi-year plan to restore all of the spaces used by Judd. “This project was guided by Don’s lifelong work in architecture, his thinking and interest in the history of a building,” said Rainer. “The Architecture Office represents Don’s commitment to creating a space dedicated to thinking about the role of architecture in our lives. All of our work at Judd Foundation builds upon his thinking and approach to projects.”

In the days after the fire, employees of Method Building Company – one of the main contractors that worked to renovate Judd’s office – were busy helping stabilize the building’s outer walls. As the structural integrity of the building is still in question, steel support beams were installed on the outside of the building in case of strong winds. “We have been working with our structural engineers who have calculated that most of the walls, three bricks thick, have the capacity to withstand high winds,” Schaum, the architect, said.

Shoring up the outside walls has been Rainer’s primary goal since Friday morning. “It’s an honor to be a part of something that brings so many people together,” Rainer said. “Everybody gets to contribute immediately to mobilizing their grief into productivity.” 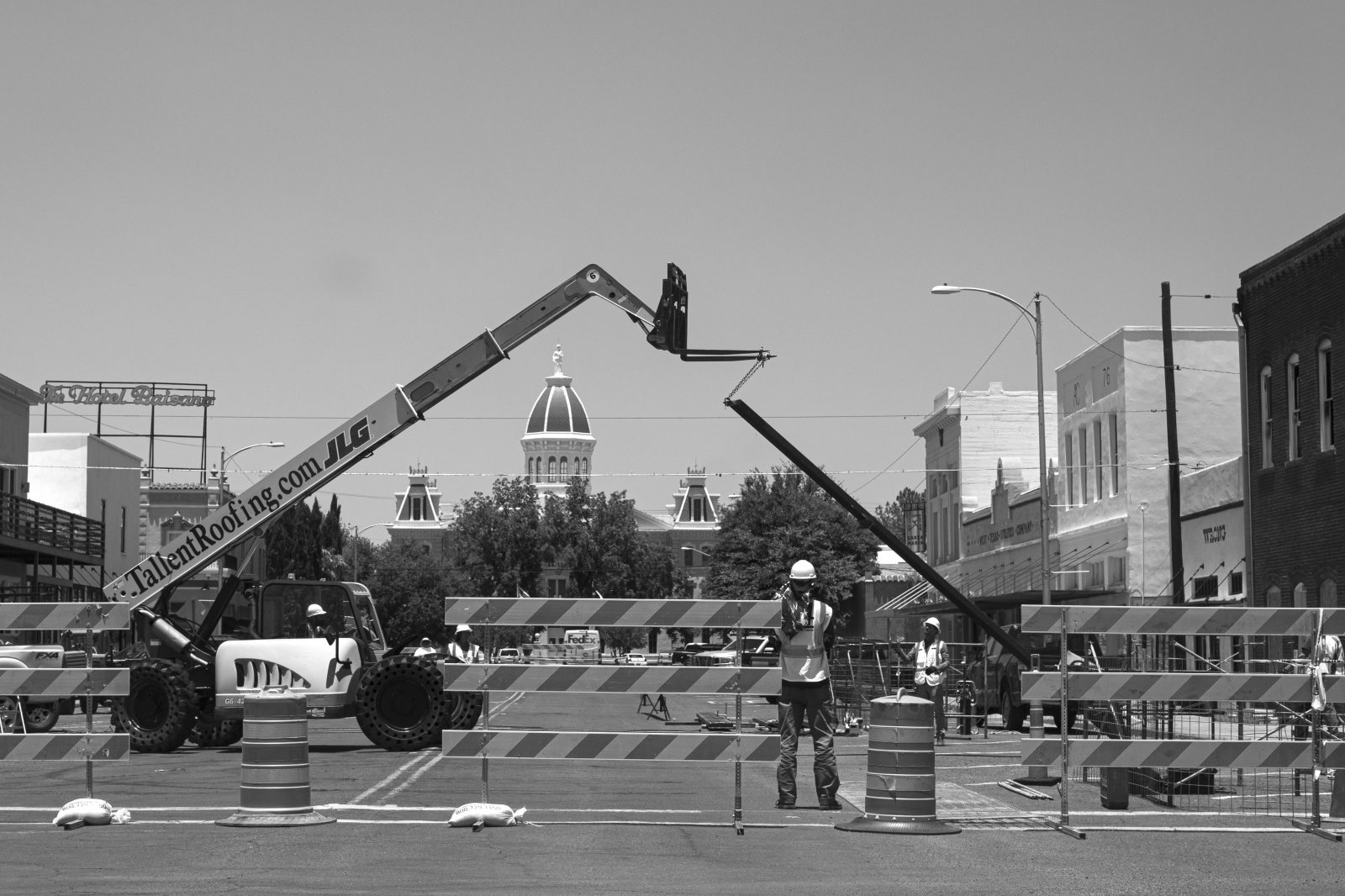 Staff photo by Maisie Crow / Method Building Company employees work to shore up the Judd Architecture Office after a fire caused significant damage to the building. The steel beams were put in place to provide structural support and protect from high winds.

And with over 10 teams involved in the project, there were a lot of people working on this renovation. The Judd Foundation called in historic masonry consultants from Canada, preservation consultants from New York – and most of the craftspeople were from right here in Marfa.

“So when we lose a window or a skylight, it’s something that’s been made – a lot of it at least – by hand by people in Marfa,” Schaum said. “It’s a painful thing for a lot of people in town to watch things they worked on burn that way.”

At this point, the foundation has not received permission from the fire department to go inside the building to assess the damage to the renovation materials. “From what we can see from the outside hopefully some of the metal ceiling, wood floors, hardware and other elements can be saved and reused,” Schaum said.

“While it is a setback to our restoration of that building as related to Don’s work, we have received an overwhelming amount of shared experiences from the community,” Rainer said. “We are inspired by those collective memories and historical importance of the building to Marfa.”