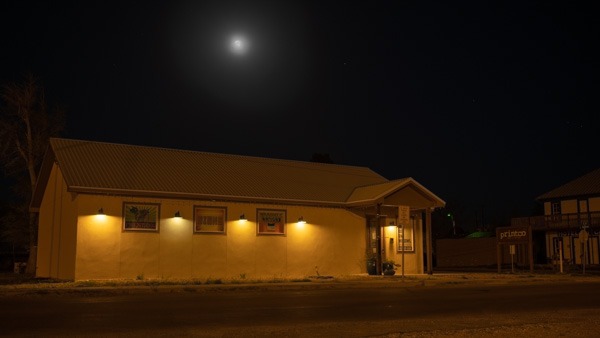 The Printco Building in Alpine, TX has been recognized by the McDonald Observatory for its dark-sky compliant lighting. A new city of Alpine ordinance revision mandates dark-sky compliant lighting, giving a five year grace period for those who are currently non-compliant. Photo by Stephen Hummel / McDonald Observatory
Subscribe

ALPINE – After a handful of workshops and public hearings, the City of Alpine passed a newly revised dark skies ordinance that will regulate outdoor lighting at night and impose fines for violators after a five-year grace period. At the Tuesday night meeting, council also made hirings and appointments, approved contracts and donations and quibbled over one council member’s place of residence.

A dark skies ordinance was first passed in Alpine in 2000 and was revised in 2010, but the latest version brings Alpine into compliance with the International Dark Skies Association, making the passage a vital step to a larger project for the Big Bend area to become the largest dark sky preserve on the planet.

Few objected to the ordinance, which adds language that noncompliant lighting is “grandfathered in” under the ordinance for a five-year grace period, after which it must be brought into compliance or else face fines of $50 a day. Outdoor lighting over 200 lumens must be shielded in a way that directs light toward the ground and “light trespassing,” where light on one property shines onto another property, into motor vehicle drivers’ eyes or upwards toward the sky is now prohibited. The full text of the ordinance can be read at city hall.

Laura Gold, an advocate of the ordinance revision, said Sul Ross had been contacted “time and time again,” and interim City Manager Megan Antrim said she received an email from a school representative that day and invited SRSU officials to attend the final hearing that night.

“The observatory has been working with Sul Ross literally for decades on 13 light fixtures to have them brought into compliance,” said Bill Wren, the McDonald Observatory’s Dark Skies Initiative Coordinator. “Those are the only ones I’m aware of that are not in compliance on Sul Ross campus, and we have offered to offset the cost.”

Mayor Andy Ramos supported the new ordinance revision, saying it was a perennial issue in his five years in office, and that the chamber of commerce and local businesses have brought up revisions over that time.

Councilmember Judy Stokes remarked that a similar ordinance already existed in Brewster County. “If they can get Marathon and Terlingua on board, surely we can get Alpine on board,” she said.

Gold hoped the city would lead with education before going into enforcement, saying, “I don’t want my lights enforced, I want someone to talk to me about what makes it a good light, what makes it a friendly light, and why a light on my property is being perceived as trespass and why it’s a problem. I’m a big believer in education.”

The city has already had some success through education. The new laundromat changed its noncompliant lighting after speaking with interim Secretary Geoffrey “Geo” Calderon.

The council approved the new ordinance, with Councilmember Chris Rodriguez as the lone dissenting vote.

Councilmember Stokes sponsored an agenda item to discuss council member residency requirements, explaining she had gotten calls about the residency of Councilmember Rodriguez, saying there were concerns she lived at a residence separate from the one she ran under.

According to the city’s charter, elected officials have to reside in the ward they were elected to represent, and if they cease to reside in that district, “he or she shall immediately forfeit the office.”

While Stokes said some say Rodriguez lives elsewhere, the council member rebutted, “I’m not ready to discuss my personal life or that what I do in my personal life is anyone’s business.” Rodriguez asked if the charter said what percentage of time she had to live in the ward, to which the mayor responded it did not.

“I’ve gotten the calls and I’ve just ignored them for a while, but it came to light and so I wanted to discuss it,” Mayor Ramos remarked. Rodriguez openly admitted she did not reside at her residence “100% of the time,” she said, “but it continues to be my residence.”

“Legal residence is where you might get your tax statement or where she legally resides, but the charter talks about where you physically reside,” interim City Attorney Rod Ponton said. “It’s more like the physical residency. The council gets to choose if someone is physically residing in their ward or not – that’s up to council.” Since it was a discussion item only, no action was taken.

In other business, Police Chief Robert Martin informed council that the department had set up an account with Video Magistrate, which will allow them to magistrate arrestees around the clock, digitally. Since the Brewster County Jail had stopped taking inmates that had not been magistrated yet, the new software is “going to be a huge help for the department on getting people into the jail,” Martin explained.

Council also considered three candidates for the Planning and Zoning committee, but struggled to fill the two open positions. Council first rejected appointing former Councilmember Stephens to the committee, with only Rodriguez voting to add him.

Councilmember Jerry Johnson motioned to approve Deborah Derden, but after Stokes brought up her connection to a code enforcement employee of the city being a potential conflict of interest, the approval of Derden was tabled for a future meeting.

The one successful addition to the P&Z committee was Lucy Escovedo, with council approving except for Rodriguez.

One thing the council could all agree upon was the performance of interim City Secretary Geoffrey “Geo” Calderon. The former records clerk and interim city secretary was named city secretary at the Tuesday night meeting.

Councilmembers Stokes and Rodriguez both commented their endorsements of his ability to take on the role, and Mayor Ramos added, “Geo does a fantastic job. Anytime you need something, within minutes it’s there.” In council comments, Councilmember Tandy congratulated Calderon and thanked him for his “happy disposition that creates a warm atmosphere at the city.”

Next up on the agenda, interim City Attorney Rod Ponton was given a contract to continue on in an interim capacity. Ponton was named interim at a June 1 meeting, even after being terminated from the city attorney role in late 2020 after he was unable to satisfy the previous council’s request to provide reports to back up his accusations that Alpine Police Department had a “repeated pattern of police misconduct.”

Council had no discussion of the item, and while Rodriguez opposed it, the rest approved the contract. The contract has an indefinite term and will give Ponton $200 an hour for his services.

In other business, council accepted an agreement with Big Bend Telephone to take on a grant on behalf of the city to improve access to fiber optic internet, and they agreed to lease a piece of ground at the Alpine-Casparis Municipal Airport to Customs and Border Protection to build a helipad that would not be accessible to the public. A donation from Dr. Avinash Rangra of 17 trees and two memorial plaques for the American Legion Park and Dog Park area at Kokernot Park was also formally accepted, with Councilmember Johnson thanking Rangra for adding to the landscape of Alpine.