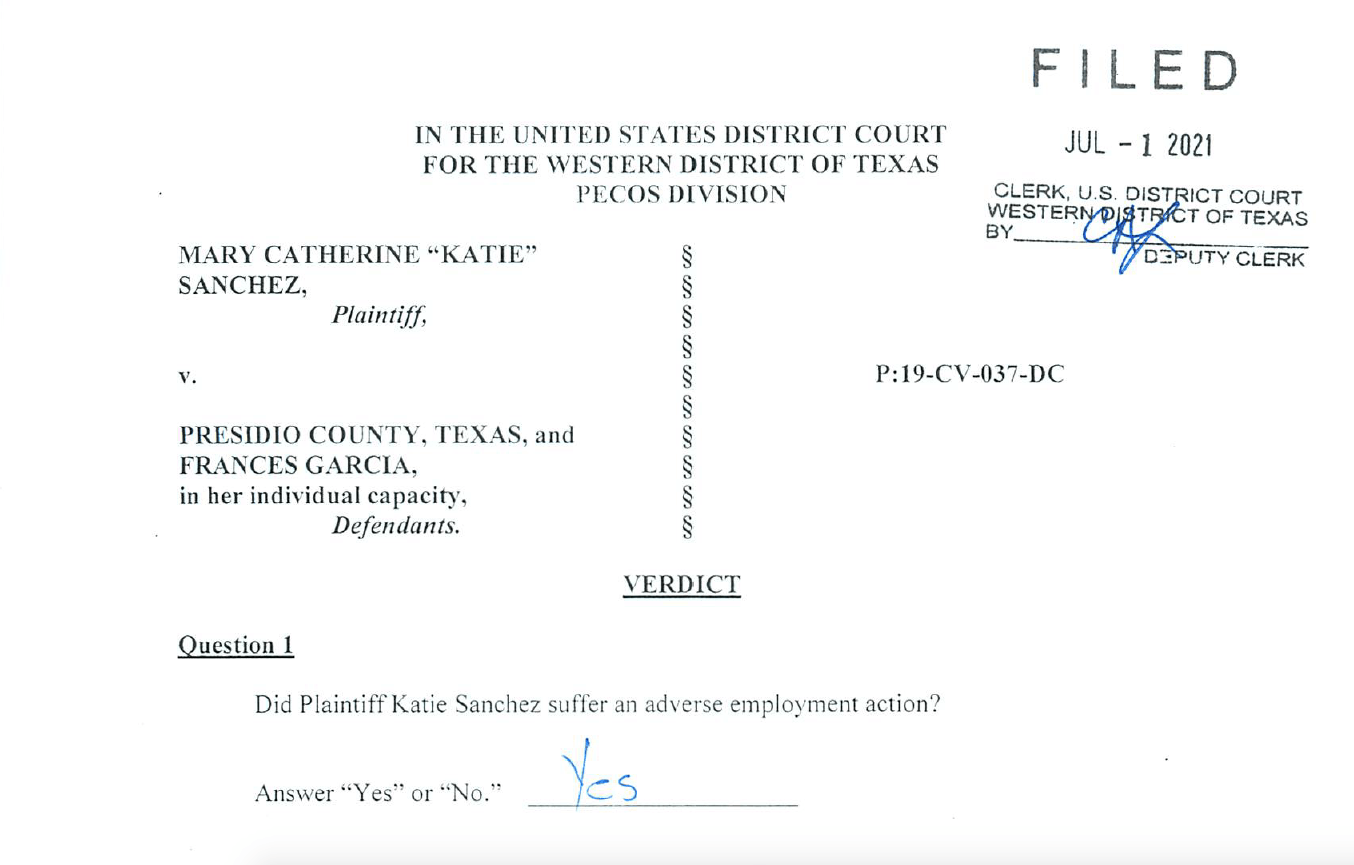 PECOS –– Last week, a federal jury found that Presidio County retaliated against Katie Sanchez, the former director of the Office of Management and Budget, by eliminating her office after she unsuccessfully ran for county treasurer against incumbent Frances Garcia in March of 2018.

By eliminating the OMB, the county violated Sanchez’s First Amendment right to run for political office, and the jury ruled for the county to pay $2,000,000 in compensatory and punitive damages, the highest dollar amount suggested by Sanchez’s attorney.

As The Big Bend Sentinel previously reported, Sanchez had sought office as treasurer of the county in 2018, but lost the Democratic primary to Garcia, who is named in her own capacity as a defendant in the case.

Five months after her election loss, Sanchez’s office was eliminated at an August 22, 2018 commissioners meeting when lame duck Commissioner Loretto Vasquez put it on the agenda allegedly as a money-saving endeavor, and commissioners voted 4-1 to get rid of the department. Vasquez –– along with current commissioners Eloy Aranda, Jose Cabezuela and Brenda Bentley –– approved the cutting of the office.

Only County Judge Cindy Guevara dissented. Before the vote took place, County Attorney Rod Ponton read aloud a letter warning the county that this decision could result in a protracted, expensive lawsuit. “The courts have long held that running for office is an action protected by the First Amendment,” Ponton said. “The County’s exposure to liability through the proposal to eliminate the Office of Management & Budget could well be incredibly high.”

The following year, Ponton’s prognostication came true: Sanchez filed a civil lawsuit against the county alleging, in part, that Garcia had lobbied the commissioners to get rid of the OMB as a form of political retribution.

After a failed mediation, the lawsuit culminated in a two-and-a-half day trial last week at the Western District of Texas federal courthouse in Pecos. While the broad strokes of the case have been public for some time, many new details emerged in the trial.

Most of the county’s top officials –– from Judge Guevara to Commissioner Buddy Knight –– were called to testify at the trial. Though there were a number of facts that the opposing sides could not agree upon, many witnesses stated that the tension between Sanchez and Garcia created an acrimonious atmosphere in the courthouse.

According to Garcia, Sanchez –– as director of OMB –– was a bit of a busybody, questioning purchases made by other county officials and encroaching on Garcia’s duties as county treasurer. Sanchez, on the other hand, testified that she did not hold any particular ill will toward Garcia.

Throughout the trial, John Wenke –– the attorney representing Sanchez –– was trying to demonstrate that Garcia was scheming behind closed doors with then-Commissioner Loretto Vasquez and Commissioner Brenda Bentley to eliminate OMB as retaliation for Sanchez running for county treasurer. Garcia held one of the most powerful positions in the county, Wenke argued, and she lobbied her good friends on the commissioners court –– Bentley and Vasquez –– to get rid of Sanchez because the OMB director, in Wenke’s words, “didn’t know her place,” and had the gall to run against Garcia.

Wenke, while presenting his case to the jury, centered his argument around one particular email Garcia sent to Airport Director Chase Snodgrass regarding Sanchez. On March 28, 2018, Garcia wrote, “I am working on putting an agenda item on Commissioner’s Court in reference to OMB complaints I have. I spoke to Commissioner Bentley about this and she wants to know if you would be willing to come together with me on this. I am fixing to talk to Virgie [former Presidio County and District Clerk Virginia Pallarez] as well. I have had it with her [Sanchez].”

After that email, Garcia tried to get an agenda item placed on an April commissioners court meeting to discuss Katie Sanchez’s position in executive session, which is closed to the public. However, County Attorney Ponton blocked the item from moving forward at the time.

Then toward the end of July 2018, Garcia reached out to the Texas Association of Counties, writing in an email, “I need to find out how many counties with a population of 10,000 and under have a County Treasurer, an Auditor and an Office of Management and Budget. Our county has all three and I know for a fact we don’t need that many financial offices. Please let me know if you all do or do not and what the pros and cons are.” Garcia also went searching for the official job description of the OMB, according to emails presented in trial.

Wenke then called Justice of the Peace Juanita Bishop to the stand. Wenke questioned Bishop about an impromptu meeting amongst Bishop, Garcia and Bentley a month or two before the March 2018 election in Bishop’s office in Presidio. According to Bishop, Garcia said that as soon as she won re-election she was going to find a way to eliminate the OMB. In her deposition prior to the trial, Bishop said, “Garcia also stated that she could not believe Sanchez was running against her again, and referred to Sanchez as a ‘pendeja,’ which is Spanish for ‘dumb ass.’”

Bentley, who had a campaign sign in support of Garcia’s re-election in her yard, said she couldn’t recall what was said during the conversation.

Wenke then had Jeanne Hall, who was the only other employee at the OMB, come to the stand. Hall said that a few weeks prior to the August 22 meeting, Vasquez saw her at the Dollar General in Marfa and told her that the OMB was going to be eliminated, but that she would still have a job with the county. Hall then testified that both Garcia and Bentley reached out to her saying the same thing, just in more vague terms.

That courtesy, Wenke noted, was not extended to Sanchez. When Wenke asked Vasquez why he didn’t reach out to her, Vasquez said, “I didn’t want to cause a commotion.”

While on the stand, Vasquez claimed it was his decision to put an agenda item in front of the commissioners court to eliminate the OMB as a cost-saving measure for the county.

Wenke, through his line of questioning, attempted to poke holes in Vasquez’s claim. Why –– Wenke asked –– would Vasquez, who was a lame duck commissioner on his way out of office, all of a sudden try to eliminate the OMB when he hadn’t voiced criticisms about the office in the previous 80 or so commissioners meetings he had attended over his three years as commissioner? If eliminating the OMB was in fact just a cost-saving measure –– Wenke asked –– then why did the commissioners give raises across the board to county employees for the 2019 fiscal year? How would eliminating the OMB save the county money –– Wenke asked –– when OMB was in charge of bringing in funds to the county through grants?

In response, the county and Garcia’s attorney –– Jon Mark Hogg  –– spent hours trying to prove to the jury that the elimination of the OMB was a reasonable, purely fiscal decision.

To do this, Hogg –– who was provided as counsel to the county through the Texas Association of Counties –– went all the way back to November 2014 when the OMB was first created. Through a number of testimonies, Hogg demonstrated that at the time, the county needed the OMB as the county’s finances were a mess, and it had recently received an adverse audit. The OMB was charged, in part, with helping sort out this issue but by 2018 the county’s financial house was back in order.

Hogg then asked a number of witnesses as to whether a county as small as Presidio needed three financial departments: the Office of Management and Budget, the county auditor’s office and the county treasurer’s office.

Hogg, while questioning Vasquez, brought up how the commissioners were undergoing the budgeting process for the fiscal 2019 calendar. Hogg had County Auditor Patty Roach testify that the county was projected to have a deficit of more than $400,000 that year. If there were any appropriate time to consider eliminating the OMB, it would be during the budgeting process when the county is facing a deficit, Hogg argued through his questioning.

Garcia didn’t lobby Vasquez to get rid of OMB –– he did this on his own volition as a commissioner concerned about the county’s finances, Hogg said. And whether cutting the OMB would save the county money is beside the point as Garcia does not have the authority to make such a decision –– that power lies with the commissioners and the county judge alone.

In his closing statement, Wenke leaned heavily on the narrative he had laid out to the jury, bringing out a poster with a timeline of events from the case. He pointed to the early 2018 meeting where Justice of the Peace Bishop testified Garcia called Sanchez a pendeja and said she was going to find a way to eliminate the OMB.  “We already have a conspiracy with her and her amiga,” Wenke said to the jury.

Wenke then called into question former Commissioner Vasquez’s testimony: the idea that Vasquez wanted to eliminate the OMB as a cost-saving measure just didn’t add up. “It’s a pretext to hide the real motive, which was to get rid of a political opponent,” he said.

“There’s overwhelming evidence of political retaliation,” said Wenke, who then brought up the familial ties between Garcia and Vasquez, whose wife is a second or third cousin to Garcia. “She [Garcia] had her best friend and husband of her prima take care of this,” Wenke said.

Hogg, in turn, went back to his argument that the OMB was an obsolete department in his closing statement. He asked the jury, “The real question in this case is how many financial departments does a county of 7,000 need?”

Hogg then tried to downplay Garcia’s power as treasurer in the county. Garcia wasn’t the “boss hog” of the county as Wenke had made her out to be. She didn’t set the county budget. She didn’t have a seat on the commissioners court. And she didn’t have the power to abolish the OMB.

The jury, however, was not persuaded by Hogg’s argument.

And the jury found that Sanchez suffered from an adverse employment claim and was entitled to $1,000,000 in past and future compensatory damages and another $1,000,000 in punitive damages.

That said, this case is not closed and shut. United States District Judge David Counts still has to enter a judgement, either siding with or overturning the jury’s verdict in whole or in part. Moreover, if the judge does side with the jury, the county and Hogg will most likely appeal the decision, bringing the case to the 5th Circuit Court of Appeals.