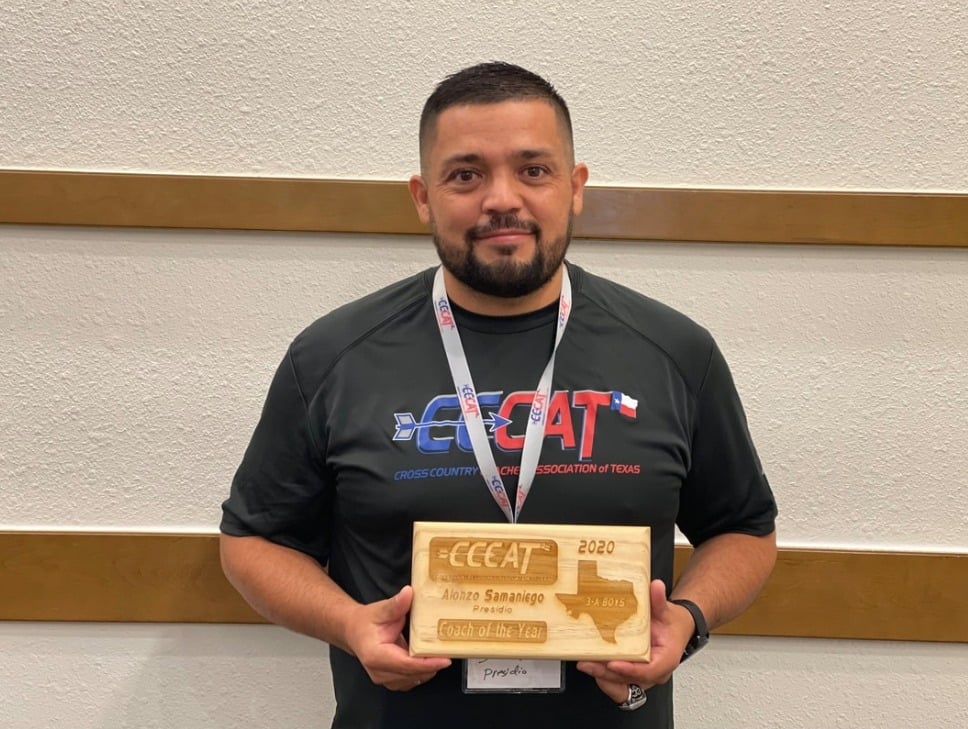 PRESIDIO – Presidio High School Coach Alonzo Samaniego was selected as the top boys cross-country coach throughout the state of Texas in the 3A division. The award was given by the Cross Country Coaches Association of Texas, and Samaniego was invited to be a guest speaker at the association’s annual coaches clinic in June.

Samaniego said he was proud to receive the award, although he was surprised by the circumstances in which he learned about the nomination. “One of our cross-country parents texted me saying, ‘Congratulations,’ and I had no idea,” he said.

In November of last year, Samaniego led his runners to Round Rock where they won the 3A state championship in cross-country. “That’s part of the reason why I got this award, and you know, all credit goes to the kids,” he said.

Samaniego said that one his runners, Marco Rey, had been talking about him winning the award all year long. “For me, it wasn’t fair that Coach wouldn’t get an award for his big effort during the season,” Rey said. “I told him once, ‘Coach, you will win that award. There’s nobody in this year better than you, just mark my words.’”

“I wasn’t surprised that [Samaniego] won it,” Rey said. “We had an absolutely incredible season –– winning district, regionals once again and state. We got the best team in the state and the best coaching staff as well … Without a doubt, Coach Sam really deserved that award.”

At the coaches clinic in June, Samaniego talked about certain coaching techniques that he found really benefited his team this year. “Some of the top programs in the state, they will run up to a hundred miles a week. They’re very successful at it,” he said. “There’s nothing wrong with that, we just don’t do that. We might hit half of that during a week.”

Samaniego said that he adjusted his workouts to fit the needs of his runners. “We probably wouldn’t have a team if we went out and ran 12 or 15 miles every day,” he said.

While giving his talk at the clinic, Samaniego also brought up some of the resources the cross-country program is lacking. “We don’t have the resources that other towns have. We don’t have parks with running trails,” he said.  “We have sidewalks –– especially these new sidewalks that are pretty nice –– but to run on, that’s not a good running surface, which can lead to injuries.”

The cross-country team does have a running trail, but Samaniego said it’s not ideal for the sport. “We’re literally running on dirt and rocks,” he said. “As far as the surface, it’s a hard surface.”

Despite that, Samaniego said his runners showed up each day determined to get better. “Every day it was all business,” he said. “Even when they are warming up, they are like little soldiers.”

Three of his runners graduated this year, but Samaniego expects there to be four incoming seniors on the team for next year. “Right now in the summer workouts, we’ve had quite a bit of freshmen,” he said. “Other than the four that are coming back, we might have some freshmen, maybe some sophomores on the team.”

Samaniego is hoping to build up this new squad and make a crack at winning the state championship again next year. “Hopefully we can have the same success next year,” he said. “I know it’s doable. Just like I’m giving credit to the kids for winning this last year, it’s going to be up to them.”