The stars and stripes: An evolution 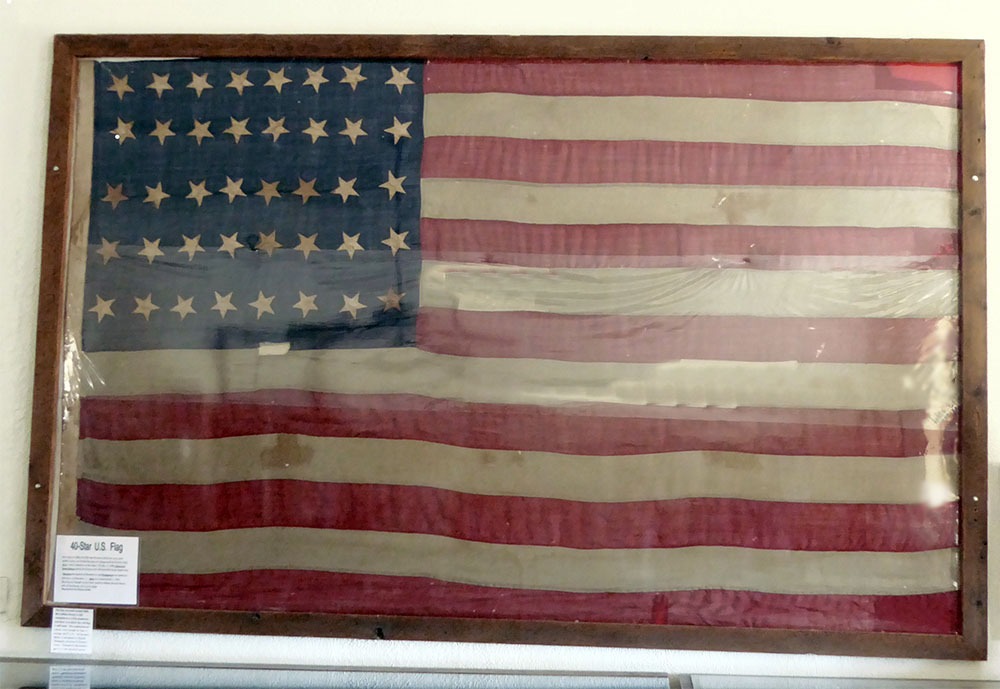 For over 60 years the United States flag has fielded 50 stars. Many citizens have never pledged allegiance to any other one. But a change may be on the horizon. In April of this year, the House approved legislation to make Washington D.C. the 51st  state. HB51, as it’s known, is unlikely to get Senate approval. Previous efforts to make Puerto Rico a state have also failed. A number of prognosticators, however, suggest that by the end of this decade, our flag will have 52 stars. Imagine what that blue field might look like.

Interestingly, the Overland Trail Museum has a replica of an older version of the Stars and Stripes worthy, in its own right, of recognition. This is the 40-star period (or parade) flag of 1889, recognized by historians as the second most rare of all U.S. flags (Amazon lists its least expensive original at $1700). Called “America’s Dakotas” flag, it was designed to celebrate the addition of North and South Dakota into the Union. Very few of these flags were made and fewer survived because it was the “official” flag for less than a week.

Prior to November 2, 1889, our nation’s flag design had 38 stars, one for each state as established by an earlier congressional act. Citizens of various territories awaiting admission to the Union assumed the movement toward that end would be slow and gradual, but Congress decided to expedite matters. Grover Cleveland signed legislation to begin the process to admit four territories as new states. The expectation was that the Dakotas would come in as one state, so production of a 39-star flag was well underway.  Politics got in the way, though, as both territories wanted autonomy. So on that November date, then-President Benjamin Harrison signed the entry of two states, South Dakota first by the luck of the draw although the order was never recorded. Suddenly, what had been a 38-star flag became a 40-star one.

But the drama wasn’t over. Six days later, Montana came in followed in three days by Washington; as of July 4, 1890, the official entry date of new states to the Union, the flag would have fielded 42 stars. But on July 10, Benjamin Harrison approved a bill admitting both Wyoming and Idaho. Within a little more than six months there existed the possibility of five different U.S. flags based on the addition of stars.

But back to that 40-star flag. In the room at the Overland Trail Museum that was County Judge Nick Mersfelder’s courtroom hangs a 40-star replica made to near exact specifications. It measures 6’X12’ but otherwise has correct proportions. Its existence is attributed to Adelaida Morales Fernandez, stepdaughter of W.H. Tinkham and wife of Otis Keesey. She was well known as an exceptional seamstress. Upon the couple’s divorce and Otis’ death, the flag became the property of Harold Thompson, executor of the Keesey estate, who later gave it to the Fort Davis Historical Society.

But not before a mini-scandal of sorts.

The top right-hand corner of the flag has an 8”X12” replacement sewn into the stripes area. Its red color is definitely brighter than the color of the original stripes. The story goes that two of Thompson’s daughters wanted remnants to make doll clothes. Their mother had scraps of material in a burlap bag. Another burlap bag beside it held the flag. Does anything else need to be said? As a side-note, each of the girls blamed the other, and the culprit was never named.

Visit the museum and take a look at this near forgotten part of U.S. history.

Susan Pittman is a member of the Fort Davis Historical Society.