As a group of Texas Democratic lawmakers flee to DC to protest Republican efforts to overhaul voting rights, Rep. Morales stays behind 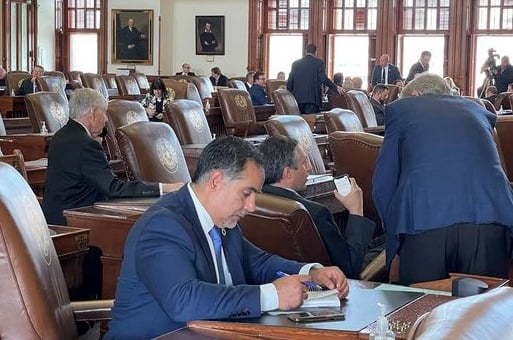 AUSTIN –A majority of Democrats from the Texas House of Representatives left the state on Monday in an attempt to block two voting restriction bills being pushed by Republicans through the special legislative session that began last Thursday. By not appearing at the legislative chambers in Austin, the dozens of Democrats left the House without a quorum, preventing the Legislature from voting on Governor Greg Abbott’s priority bills and effectively bringing the special session to a grinding halt.

However not every Democratic lawmaker left the state. Rep. Eddie Morales, whose district covers the tri-county and much of Far West Texas, decided to stay behind in Texas. “I believe that staying to both debate and articulate my reasons for opposing the bill is the best way for me to represent my particular district,” Morales said in a statement. “That said, I support the decisions of my colleagues who choose to fight this bill differently, using parliamentary procedures.”

The bills of issue –– House Bill 3 and Senate Bill 1 –– would further restrict the ability for Texans to vote by limiting voting hours, banning drive-through polls and prohibiting election officials from sending out unsolicited applications for mail-in ballots if passed into law.

Rather than appearing at the legislative chambers on Monday, the group of fleeing Democrats boarded two planes to Washington, D.C. where they plan to pressure President Joe Biden and congressional lawmakers to pass federal legislation strengthening voting rights.

“We are now taking the fight to our nation’s Capitol. We are living on borrowed time in Texas. We need Congress to act now to pass the For the People Act and the John Lewis Voting Rights Act to protect Texans –– and all Americans –– from the Trump Republicans’ nationwide war on Democracy,” a group of Democrats said in a joint statement.

In an interview, Rep. Morales said that the GOP is trying to undermine the recent strategies developed by Harris County, the most populous county in the state, that made voting more accessible. “They’re specifically targeting everything Harris County did that was successful during the pandemic,” he said. “If people loved it so much and if it’s really truly an election bill of bringing more access to the citizens, why are we not making it even more easy, setting up drive-through voting, 24/7 voting and drop boxes?”

This is not the first time the Democrats have broken quorum to try and quash the GOP’s voting restriction bills. As The Big Bend Sentinel previously reported, the 87th regular legislative session came to an end on May 30 after many of the state’s Democrats left the legislative chambers in a bid to kill Senate Bill 7, which mirrored the voting restriction bills currently being pushed by the state’s Republican lawmakers.

At the time, Morales broke away from his Democratic peers and decided to not take part in the walkout. He did so to “defend my district and defend my right to vote no on it and state my opinion.”

“It doesn’t mean we supported it [the bill], but we all stayed back to fight it and to say what needed to be said about that bill,” Morales said.

At the House chamber on Tuesday, even though the House did not have two-thirds of its members present to conduct business, the lawmakers were able to pass a measure to have law enforcement track down absentee lawmakers in an effort to regain a quorum. That said, the vote is more of a theatrical matter as state-wide law enforcement officers do not have the authority to detain people outside of Texas.

Morales was one of just four representatives –– all Democrats in border districts –– who voted against the measure to send for absentee lawmakers.

“We’re not just staying back and doing nothing. The plan is to strongly oppose it [the election bill], make sure no shenanigans take place tomorrow,” Morales said in an interview before the House met on Tuesday. “And to be ready for whatever attack may come.”

Some Democratic state senators also made the trip to Washington, including Sen. César Blanco and Sen. Roland Gutierrez. “Our democracy is stronger when more Texans participate in our elections,” Blanco, whose district covers Jeff Davis and Presidio counties, said in a statement. “But the Republican sham election bill will erect more barriers for minorities, youth, disabled and elderly Texans to participate in our elections. This is a direct assault on our democracy, all done to perpetuate the Big Lie. Basta!”

Despite Blanco’s and Gutierrez’s best efforts, the Senate was able to reach a quorum on Tuesday where they passed Senate Bill 1. That said, the bill will be handed over to the House where it will stall out until a quorum is regained.

In response to the legislative exodus, Abbott said, “Texas Democrats’ decision to break a quorum of the Texas Legislature and abandon the Texas State Capitol inflicts harm on the very Texans who elected them to serve. As they fly across the country on private planes, they leave undone issues that can help their districts and our state.”

On the house floor on Tuesday, U.S. Senator John Cornyn remarked on the Democrats’ decision to break quorum. He said, “All eyes are now on Washington, D.C.’s newest asylum seekers, the members of the Texas House of Representatives. Rather than do their jobs in Texas, yesterday House Democrats abandoned both our state and the millions of Texans that they represent. They got on two chartered jets, mask-less with at least one case of lite beer and hopped on the jets to come to Washington, D.C.”

The Democrats in Washington would need to stay out of Texas for the rest of the special session, which comes to an end on August 6, in order to stifle these new bills. That said, Abbott still has the authority to call another special session in the future.

Yet Vice President Kamala Harris met with the Democrats on Tuesday –– a sign that the federal government is, at the very least, listening to the lawmakers plea for help.