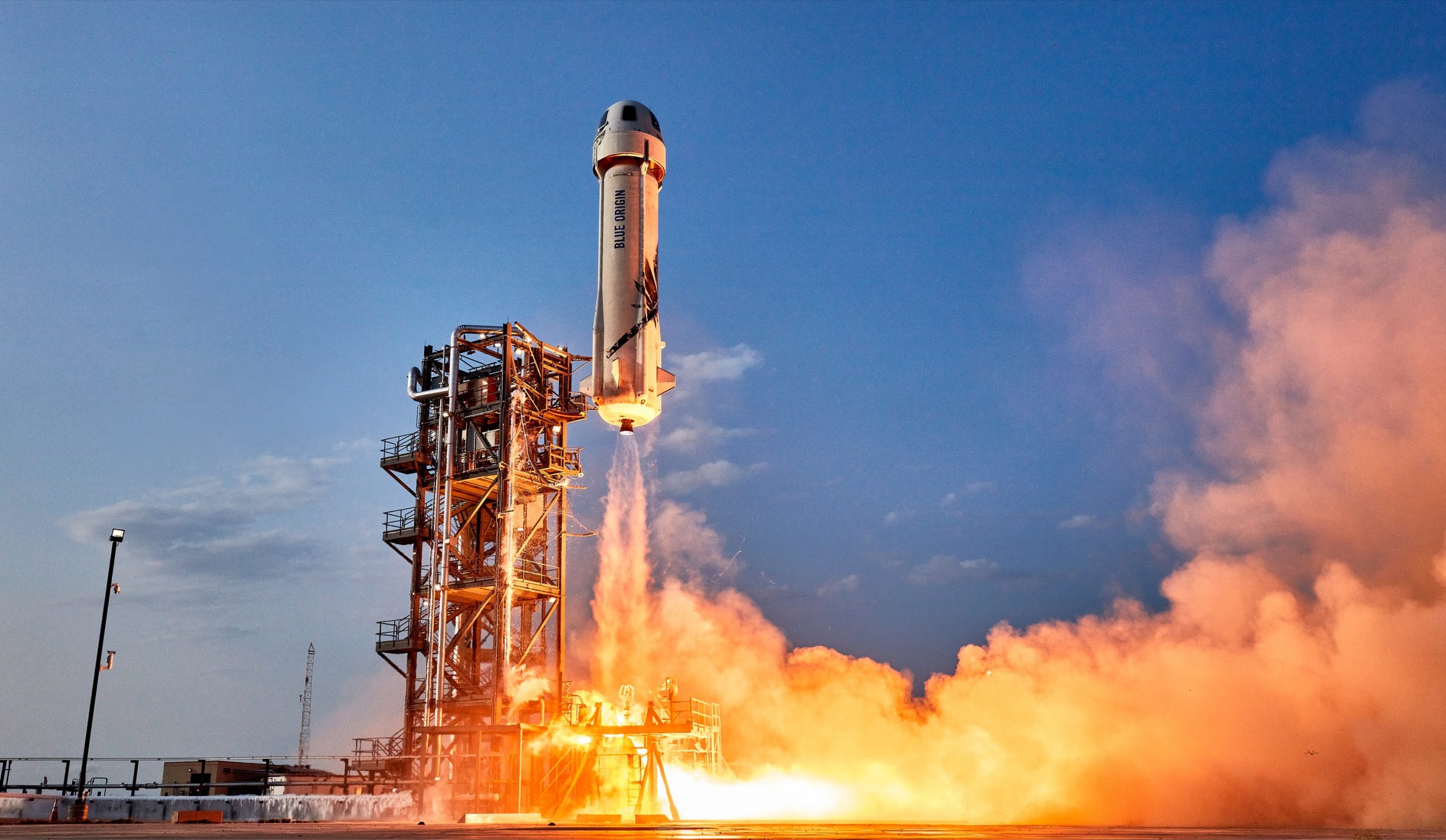 CULBERSON COUNTY – Blue Origin successfully launched its first four travelers into space on Tuesday, promising the beginning of a new era of space tourism in West Texas. Departing on a still and temperate morning, the crew flew skyward from a dusty ranchland dotted with creosote and mesquite just north of Van Horn.

Striding across the launch pad at the Corn Ranch in Culberson County that morning were Jeff Bezos, his brother Mark Bezos, Wally Funk and Oliver Daemen. Funk, 82, has aspired to become an astronaut her entire life, being the youngest graduate from the Woman in Space program nearly 60 years ago. This week she became the oldest person to fly in space. Joining her in breaking records was Daemen, 18, who was the first paying customer on board Blue Origin’s New Shepard astro tourism capsule. He became the first person to buy their way to space, and the youngest to make it there. 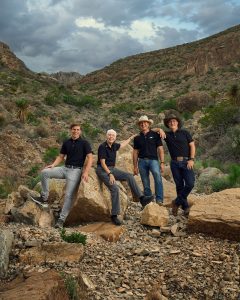 Curious locals and dedicated space fanatics alike scrambled out of bed early, lining the shoulders of Highway 54 as early as 3 a.m. to catch a view of the rocket. Five hours later, a rocket streaked above West Texas, making a parabolic arc through the edge of space at the Kármán line, over 62 miles above sea level where normal aircrafts can no longer get lift.

That line – higher than where fellow billionaire Richard Branson flew last week on his Virgin Galactic flight – is one of the nebulous attempts to define the border of space, and it’s where Blue Origin hopes to send many more people as it joins the 21st century space race to normalize recreational, commercial space flights.

Bezos, the Amazon magnate, founded Blue Origin in 2000 on the heels of his successes with online retail. Today he is noted as the richest man on Earth, with an estimated $205 billion to his name, but when he first came to West Texas to begin his space project, he hadn’t yet soared to such heights.

He was still best known as the online bookseller, dotcom billionaire and CEO of amazon.com when he arrived here 17 years ago to scout properties for Blue Origin. Bezos chose the area for its remote expanses and his personal history of growing up in Texas and visiting a family ranch. But the area had brushes with space travelers even before Bezos was captivated by the land and set up his private company north of Van Horn in the early aughts. 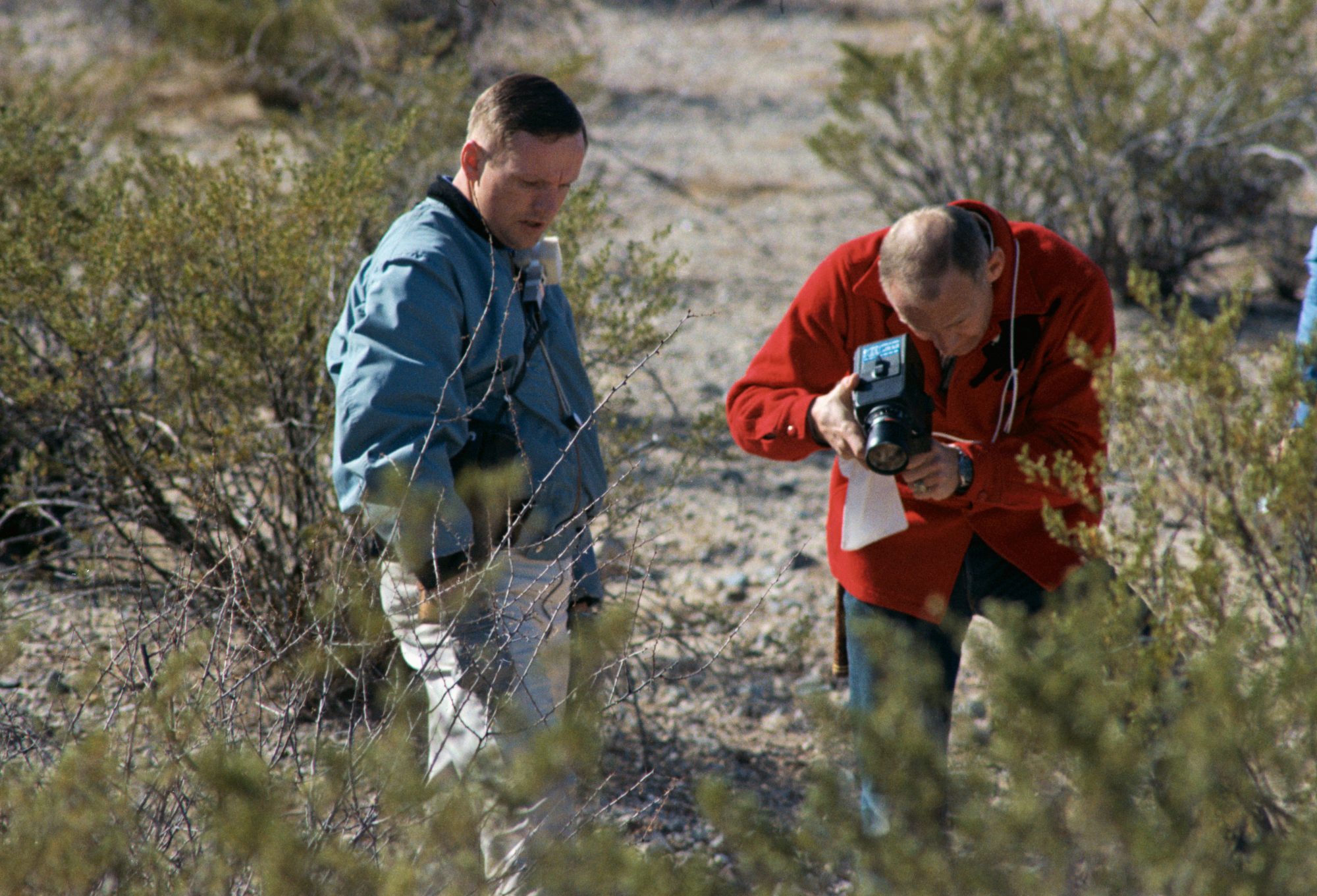 In 1968, NASA astronauts training to visit the moon for the first time came to West Texas on a geology field trip, stopping in Marfa before heading to Sierra Blanca. There, among the creosotes and rocky ground, the soon-to-be-astronauts used the lunar-esque desert geography to practice the skills needed to collect rock samples on the moon.

Among those West Texas visitors were space trailblazers Buzz Aldrin and Neil Armstrong. In homage to those who came before, Bezos’ company has named its crafts after heavyweights like Armstrong and Alan Shepard.

Exactly 52 years before Blue Origin’s crewed flight, Apollo 11 made its lunar landing with Armstrong and Aldrin inside. Boarding the “New Shepard” craft on Tuesday, Bezos and his fellow travelers honored other milestones that led to space travel, carrying a piece of canvas from the Wright Brothers’ first powered airplane, a medallion for the first hot air balloon flight and a pair of goggles worn by American aviator Amelia Earhart.

Before he bought up ranchland in Culberson County, Bezos had searched for land in both Brewster and Presidio counties, visiting the area by helicopter to scope out the ideal site for his future rocket testing ground and launch pad. 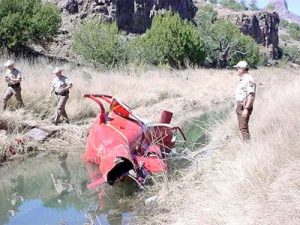 On an ill-fated scouting trip in March 2003 at Cathedral Mountain Ranch, a privately chartered helicopter piloted by Charles “Cheater” Bella abruptly crashed to the ground with Bezos on board. The passengers and pilot all sustained non-life-threatening injuries. Brewster County Sheriff Ronny Dodson described the incident then, saying the copter “caught a bad wind” and crashed into Calamity Creek. But Bezos wasn’t deterred. Soon after, he purchased the Corn Ranch, Blue Origin’s Texas outpost ever since.

On Tuesday, the West Texas winds were forecast to be favorable. Bezos and his guests strode across the site, ascended the tower and shifted with nervous energy as they made their last flight preparations. Passengers rang a ceremonial bell one by one as they proceeded into the capsule, and after a brief delay they were propelled to space with a blast. 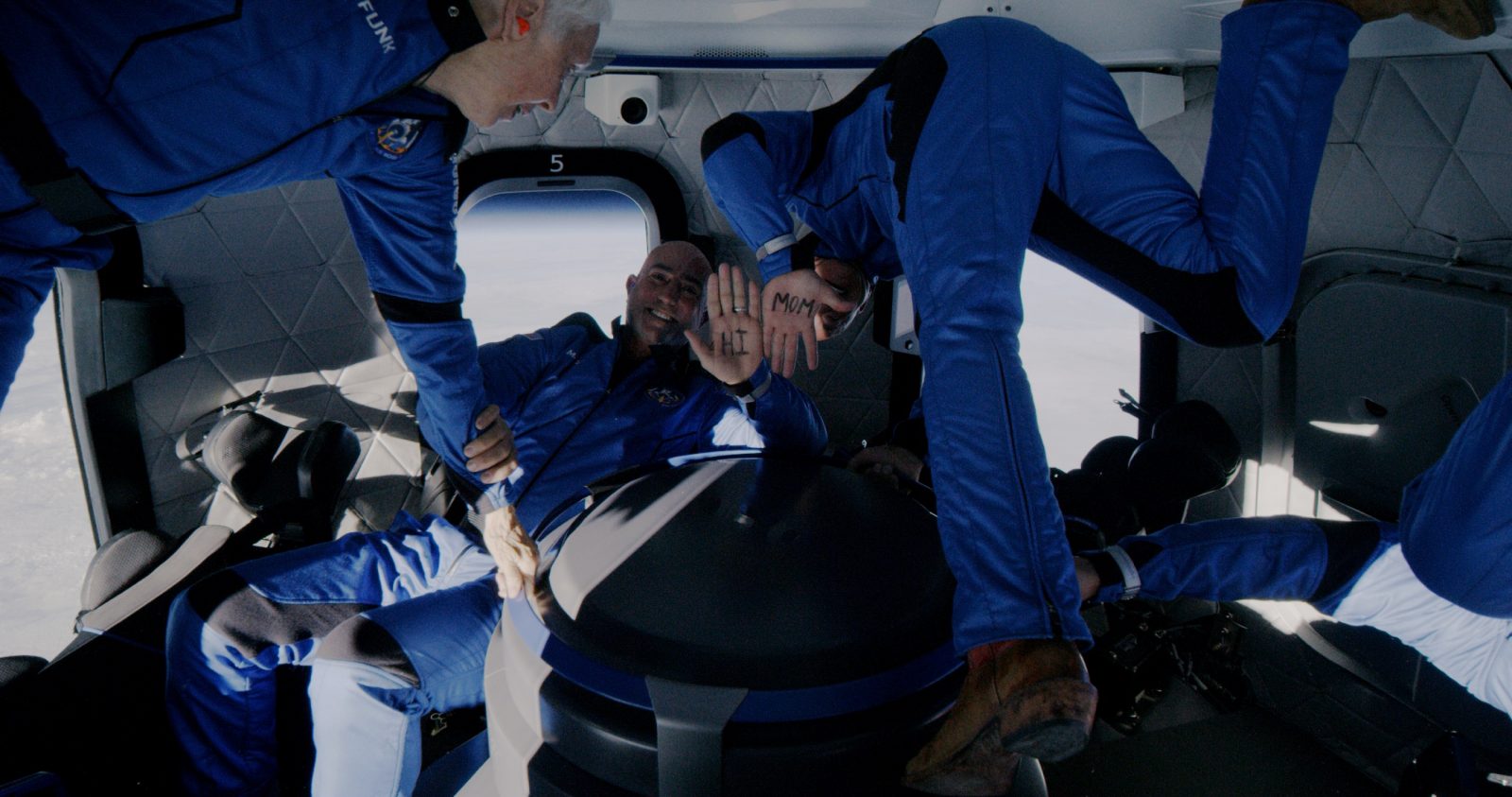 Jeff Bezos (right) and his brother Mark Bezos send a message to their mom from space. (courtesy of Blue Origin)

In 11 minutes’ time, the crew was back on Earth. Dust lifted up around them as they touched down, and Blue Origin astronaut and Orbital Sales Director Ariane Cornell remarked that the lack of wind had evenly splayed the chutes on the ground around them.

Bezos gave a hearty thumbs up through the capsule window, and the four newly-minted “astronauts” exited the cabin and hugged awaiting loved ones. In the new era of space tourism, the astronaut title is hotly debated, with some saying the amount of training received by the passengers other than Funk doesn’t entitle them to the honorific, since they can’t command the ship. Regardless of the title, Bezos and the other space tourists were soon uncorking bottles of champagne in celebration of the successful mission.

Back in Van Horn city limits, the city had printed off and posted signs of support around town, with messages like “The sky is the limit” and “Go Blue Origin, we support you.” One local building owner had commissioned a mural that prominently featured the faces of Bezos and his brother. 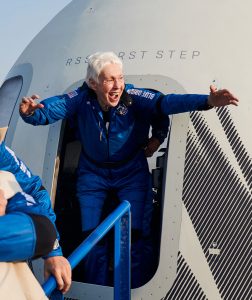 Wally Funk, now the oldest person to travel to space, emerges from Blue Origin’s New Shepard after an 11-minute round trip voyage to space. (photo courtesy of Blue Origin)

Culberson County Sheriff Oscar Carrillo characterized the business’s presence in the town as minimal but pleasant, with the occasional thundering boom of a craft making its return. “They’ve been a good neighbor, a quiet neighbor,” the sheriff said Monday night ahead of the launch.

Sheriff Carrillo hoped the company would grow after the successful launch, because it could bolster the local economy, saying, “Hotels are sold out, restaurants are busy. It’s a good economic boost.” The company has also hired local painters, contractors and logistical support personnel and constructed apartments to house employees in town. Currently, Blue Origin’s Van Horn site has 275 full-time employees and “a number of job openings at our site as we continue to grow and expand,” a company spokesperson said.

Blue Origin has kept its publicity to a minimum up until this week’s flight, often opting not to announce test flights before launch day. However that changed with the rollout of the crewed flight. “This one is a bit different,” Carrillo said. “Mum’s been the word – they just don’t advertise – but this one here, it’s everywhere,” he said. Calls from national news outlets and interested attendees poured into the offices of public officials ahead of the first crewed launch from the area, and for the first time the private space company welcomed a number of press outlets to the launch.

Bezos acknowledged that space flight was out of reach for those not in the multimillionaire class, saying that continuing to run those flights and making them more efficient was the best way to make them more accessible for those who can’t currently afford the joyride.

For some, the closest they can get is standing in Van Horn, watching space flight from down below. However, even with the spectacle on Tuesday, Blue Origin opted not to offer a designated viewing area for enthusiasts who want to witness the launches, saying they didn’t have the resources to accommodate one. Instead, roadblocks were erected on the road that meets the ranch, and eager spectators gathered as close as they could get, parking along the shoulders of Highway 54 outside the road closure.

After the morning flight, Bezos told the media he was focusing more of his energy on Blue Origin going forward, after stepping down as Amazon CEO earlier this year. The company has two more crewed missions slated for 2021, and Bezos said he wants the frequency of their flights “to be very high.” The company has already sold nearly $100 million in tickets to people eager to get aboard a Blue Origin craft, with Bezos touting the high demand.

Hundreds of millions of dollars in federal contracts have helped fund the company’s actions, and Bezos on Tuesday also credited “every Amazon employee and every Amazon customer, because you guys paid for all of this.” The comment rang as tone deaf given the long standing debates over wages and worker treatment in Amazon facilities, where employees have lower than average wages in the warehouse industry and often sustain more on-site injuries than those working for competitors.

Bezos also explained that Van Horn astro-tourism was a means to an end. “Every time we fly this tourism mission, we’re practicing the second stage of New Glenn.” The New Glenn craft is a heavy lift rocket that will be able to, for example, carry materials to the international space station or into orbit.

Flying the world’s wealthiest into the outer limits of the atmosphere isn’t the program’s final destination. While he didn’t offer specifics on where exactly Blue Origin is headed on Tuesday, the company’s stated vision includes finding new energy and resources through space exploration and moving industries that “stress Earth” into space. It’s a distant goal, but as Bezos often says, they’re building the road to space so the next generations can build the future. For now, the road to space goes straight through Van Horn, Texas.