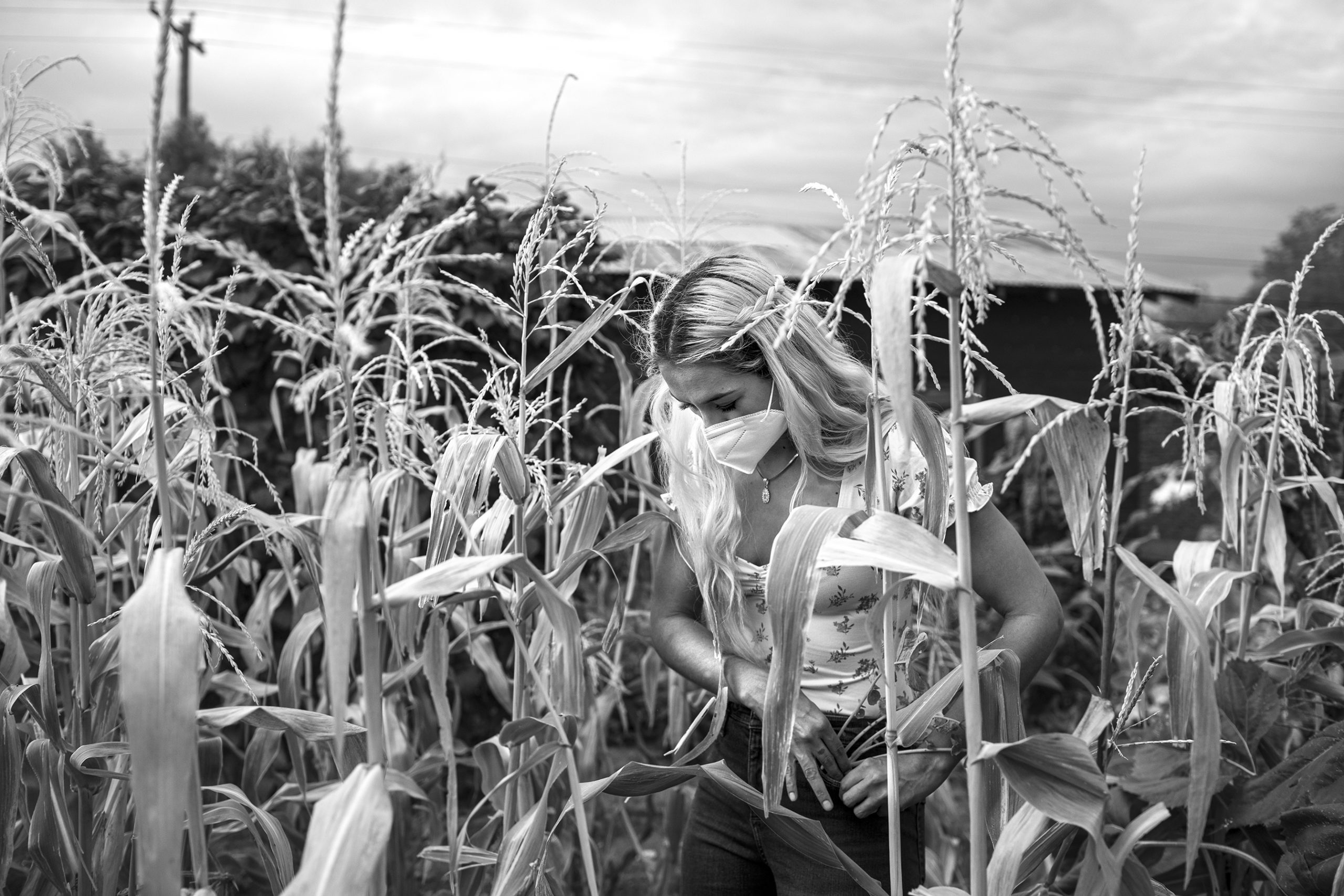 MARFA — At the end of July, clients of the Marfa Food Pantry received the inaugural text letting them know there was a bounty of fresh produce available for pickup, courtesy of the new Marfa Harvest/Cosecha Marfa program.

While canned and dry goods have long been a staple of the pantry, last year they added a garden behind the property and started handing out produce when possible. Meanwhile, the pantry was seeing its clientele double in numbers as the pandemic struck those who were already struggling to keep food on the table.

This summer, the Big Bend Conservation Alliance began building upon the idea of delivering fresh, healthy foods to clients, launching Marfa Harvest/Cosecha Marfa in partnership with the Judd Foundation and in collaboration with the food pantry.

Inspired by La Junta de los Ríos — an agricultural site that was continuously farmed for thousands of years along what is today Presidio County’s southern border — the idea for Marfa Harvest was developed between BBCA’s Executive Director Shelley Bernstein and Judd Foundation President Rainer Judd this spring during a conversation about food security and the environmental benefits of growing food locally.

It turned into a conversation about how to lower the cost of living for Marfa residents, of which 20.6% live below the poverty line. This statistic has only increased in the wake of COVID, according to Marfa Food Pantry Executive Director Genevieve Bassham and BBCA staff, who said food lines doubled during the pandemic. 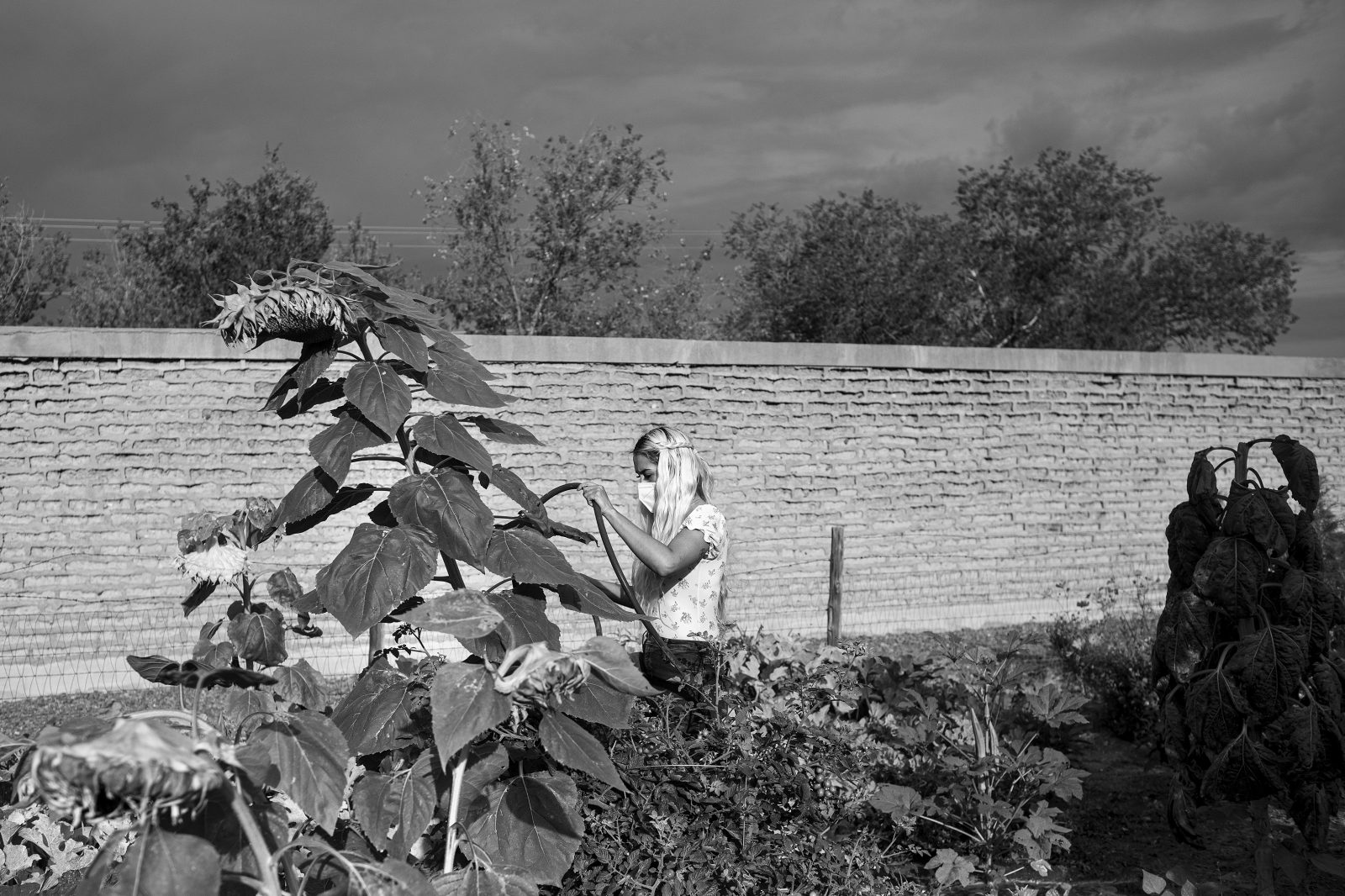 Staff photo by Maisie Crow / Big Bend Conservation Alliance’s (BBCA) Marfa Community Connector Calletana Vargas waters the garden at La Mansana de Chinati/The Block. The Marfa Harvest/Cosecha Marfa is a partnership between the BBCA and the Judd Foundation to grow vegetables and channel them through the food pantry and into the hands of locals.

Since the 1980s, Judd, the artist and grandson of a farmer, maintained a garden at The Block, which his daughter believed kept him grounded in his familial roots. After his death, the Judd Foundation continued harvesting and planting in it, feeding the produce to their employees.

“He felt the area should be self-sufficient in its produce,” Rainer said. When she would talk with Bernstein during the pandemic, the pair would discuss how the availability of local produce has waned since the 1970s when Judd arrived. They mulled over the question of how to bring fresh, locally grown produce back to the people of Marfa.

From there, BBCA and Judd Foundation connected with the food pantry, which was already growing produce to give to its clients along with their monthly distribution of goods. They devised Marfa Harvest/Cosecha Marfa as a way to grow vegetables at the Judd Foundation and channel them through the food pantry and into the hands of locals, quickly.

Permian Basin Area Foundation granted funds to the project this June, Bernstein said, and they agreed that 60% of labor for the project would be spent working at the Judd Foundation’s 50 x 50 ft. garden, 20% at the food pantry and another 20% on distribution and getting the word out to the community.

Instead of produce being limited to the once a month distributions from the food pantry, the new initiative provides fresh produce to food pantry clients every Thursday afternoon from April through October. “It’s too hard to harvest weekly and get it into that main distribution when it’s happening once a month, because things are ready when they’re ready,” said Bernstein.

“I think it’s great to give the Judd Foundation garden produce away,” said Rainer this week. Adding to the produce from Judd Foundation, the pantry operates a garden all year round –– under the skilled watch of volunteer Peggy O’Brien –– and will continue to provide their produce to clients during their monthly pickup.

“Once the pandemic hit, it hit the people who were already struggling here in Marfa,” said BBCA’s Marfa Community Connector Calletana Vargas, who was hired through the PBAF grant. “It was in my family too — people lost work, and they just need food.” Working on the project, she handles distribution, the Judd harvest, and along with O’Brien, much of the harvesting at the food pantry as well.

While putting together the project with Judd Foundation and the pantry, Bernstein realized that there were other prolific gardeners around town whose help they could also use. When locals’ backyard gardens overproduce, a few have taken to delivering their extra fruits and vegetables to the pantry on Wednesdays between 4:30 and 6:30 p.m., so that it can be distributed the next day.

“It takes a lot of harvest to feed a family. We’re surprised by how many vegetables you need, so the idea that we’re combining all of these gardens toward food insecurity is pretty powerful,” said Bernstein.

Earlier this month, local gardener Bob Schwab and his wife Leslie Wilkes dropped off 15 pounds of zucchinis and cucumbers. In addition to this, the BBCA logged 25 to 30 pounds of produce coming out of Judd’s garden and 50 to 60 pounds coming out of the food pantry garden.

Under the Marfa Harvest initiative, the pantry — which serves about 100 people — has portioned clients into groups and sends a notification by text that invites them to come by and receive fresh produce during the Thursday vegetable distributions.

The notified groups are rotated on a weekly basis to ensure that there is enough crop for everyone. One Thursday this month, Sterchi, Vargas and volunteer Gabriel Chavarria stood under the roof in front of the Marfa Food Pantry distributing produce and helping guide clients who had questions. Cheerful anecdotes about the different vegetables were exchanged as clients talked about what they’d prepare for supper and thanked the representatives from various entities for the food.

Angelica Torres, a food pantry client who showed up to pick up green beans, chards, peppers and chiles, said she couldn’t be more thankful for Marfa Harvest’s initiative to bring fresh vegetables to people in need. Torres, who doesn’t have a car and finds it difficult to travel long distances to buy food, praised the quality of produce available through the program.

“For people like me who work three to four hours a day because there aren’t many opportunities, it’s great support. Plus, it’s fresh,” she said. “Last week I ate a small pumpkin. I cooked only a little bit, with nothing but green beans. The flavor was different.”

Others like Brenda Garcia, who stopped by to pick up leafy lettuce, radishes, beets, squash, carrots and cucumbers, cite the initiative as providing health benefits for them and their families.

“I have a grandson that’s a little bit on the heavy side, but he likes vegetables, and it’s just so much more important for me to make sure that it is fresh and organic and just good for him,” she explained. “As soon as I got home, he wanted the cucumbers — with ranch dressing, of course. They were very, very good.”

She also said she was “extremely appreciative” of the food pantry and Marfa Harvest’s efforts to provide the community with fresh food. “I tried to do a garden myself, but holding two jobs down and raising a grandson, and just trying to stay afloat has been challenging,” she said.

“There’s a strong connection to the soil for some gardeners,” said Bob Schwab, whose garden provided pounds of zucchini and cucumbers for that week’s harvest. “We eat to survive. And to contribute to that — knowing your part in helping people eat is just satisfying,” he said. “There’s just something fundamentally fulfilling about knowing that you’re meeting the human species’ most basic need.”

Anyone looking to receive fresh produce every two weeks during harvest season as well as the pantry’s monthly distribution of goods can fill out an application to become part of their client list by visiting their office at 1403 W. San Antonio Street or website (www.marfafoodpantry.com), or calling 432-295-2921. Those wanting to volunteer or drop off produce from their gardens can visit the food pantry to get involved.

Brothers face charges in Hudspeth County shooting that killed one migrant, injured another