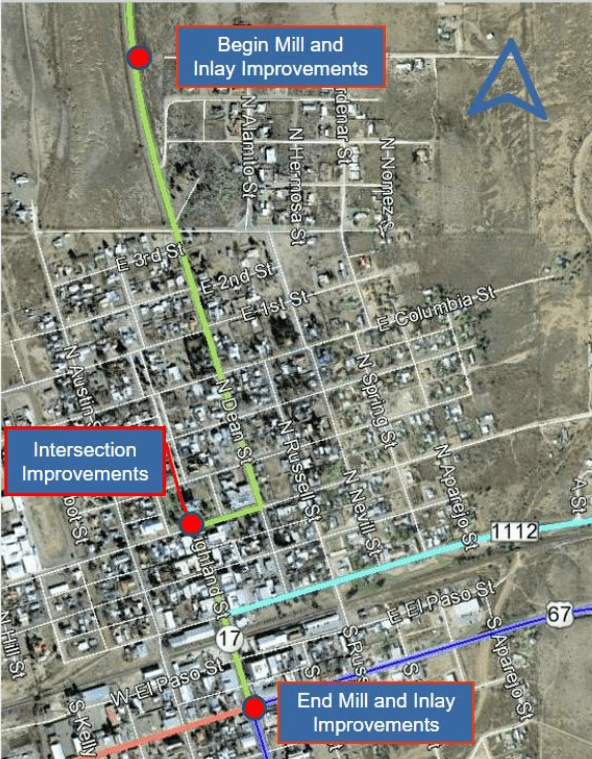 MARFA — A months-long road improvement project in Marfa by The Texas Department of Transportation to revamp Highland Avenue and Highway 17 and improve the intersection in front of the Presidio County Courthouse began yesterday, September 8.

New signage is marking the work zone downtown, and drivers are asked to proceed with caution and follow all detour signs while the eight to ten week project is underway. The road improvements span from the northern city limit of Marfa on Highway 17/North Dean Street down to Lincoln Street, jogging west to the front of the courthouse before heading south and terminating at the intersection of Highland Avenue and US 90/US 67 at the four-way stop.

That stretch of roads will see “mill and overlay” improvements — a process of removing the surface of the street and laying new asphalt to strengthen the road. Other infrastructure improvements along the route will be made on sidewalks, ramps and drainages.

The intersection at the front of the county courthouse, which falls along the route, will also be redesigned. Changes to the intersection were approved by Marfa City Council and TxDOT in September 2020, in response to safety issues at the three-way intersection. The Lincoln and Highland intersection currently has one stop sign, one yield sign and one right-of-way with no sign, but will now change to three stop signs.

The intersection saw a higher incidence of crashes over a three-year period, including a few incapacitating injuries, though no deaths. The dangers prompted the Texas Department of Transportation to study ways to improve that traffic situation, including proposing a roundabout that was ultimately denied by city council.

Lauren Macias-Cervantes, a public information officer with the Texas Department of Transportation, explained that the mill and overlay work will rely on a “spray paver” instead of a traditional seal coat under the hot mix surface, which will make the construction project less noisy and decrease the amount of time that businesses on the city’s main drag will be impacted by construction.

Along with the paving and intersection improvements, the first phase of the project will focus on drainage work near the Marfa water tower on Highway 17/North Dean Street. Drivers in town will be rerouted through the neighborhood for about a month while crews rebuild a damaged concrete box underground that is part of the drainage system, which has degraded over time from use.

According to Omar Moreno, the Alpine assistant area engineer, construction work by TxDOT should last eight to ten weeks. “We’re going to try to phase the projects so that we can minimize the impacts to the residents, the businesses and the people traveling through the area,” Moreno said.

Street parking along Highland Avenue will be affected, but sidewalks and businesses along the downtown strip will remain accessible.