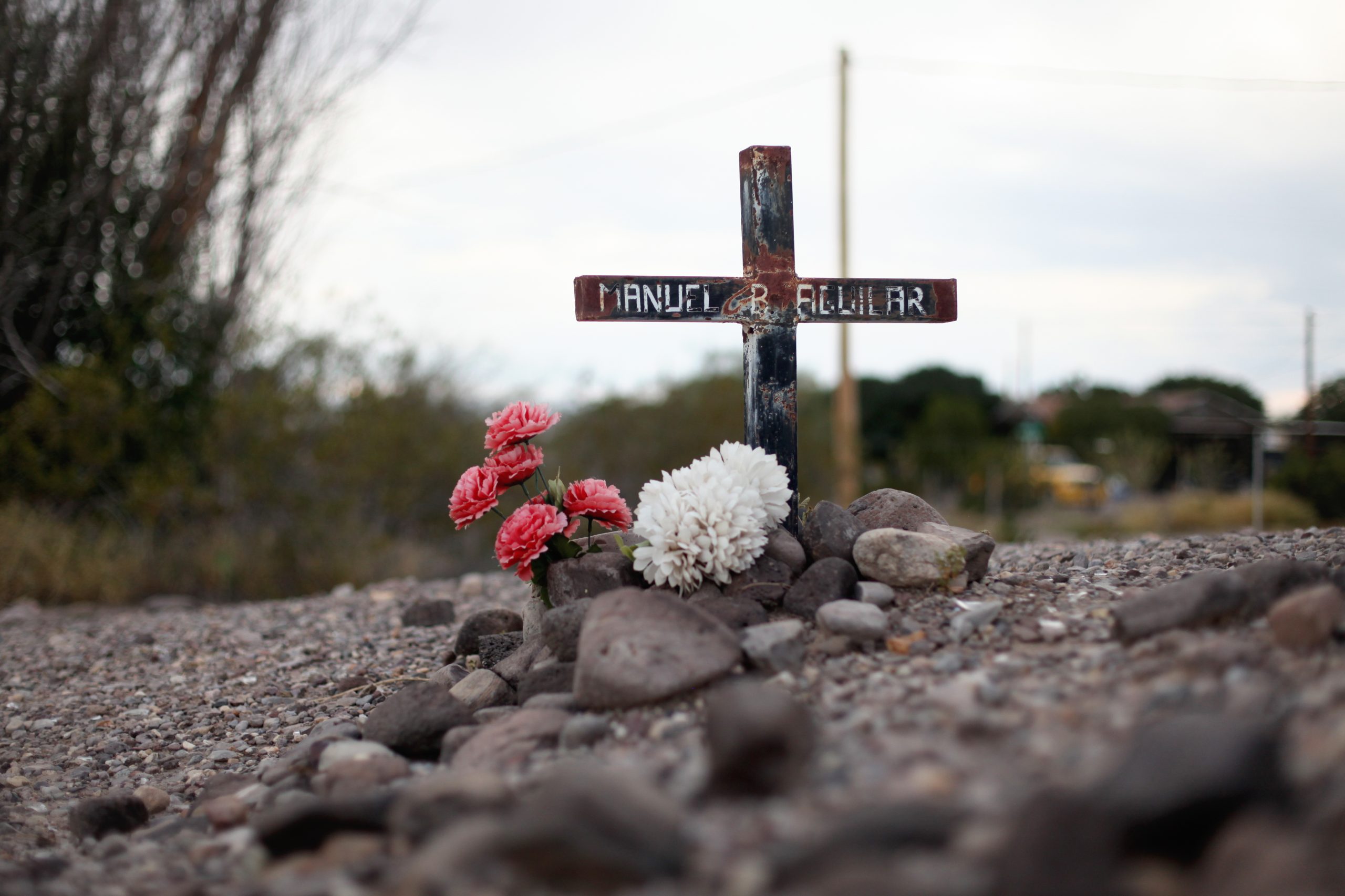 Photo by Hannah Gentiles for The Big Bend Sentinel / Presidio International. Caption: The cross on Manuel Aguilar’s grave is one of only a couple of remaining grave markers among a sea of seemingly ambiguous rock piles, only loosely marking the many graves that exist at the Lipan Apache Cemetery in the center of Presidio.
Subscribe

PRESIDIO — The Lipan Apache Cemetery sits just off of Market street in Presidio, the final resting place for a number of deceased members of the Lipan Apache Tribe that settled in the region during the 1790s.

Even though it’s a sacred site to the tribe, the cemetery has largely been left to wither over the years. In the 1970s, as the surrounding neighborhood expanded, the cemetery — or at least its recognized bounds — shrunk, with homes likely built over outlying graves. At some point, the city created an alley, complete with water and sewer lines, that cut through the southern end of the cemetery. Rocks from cairns that marked certain graves were pilfered. And without a fence, the soil began to erode. 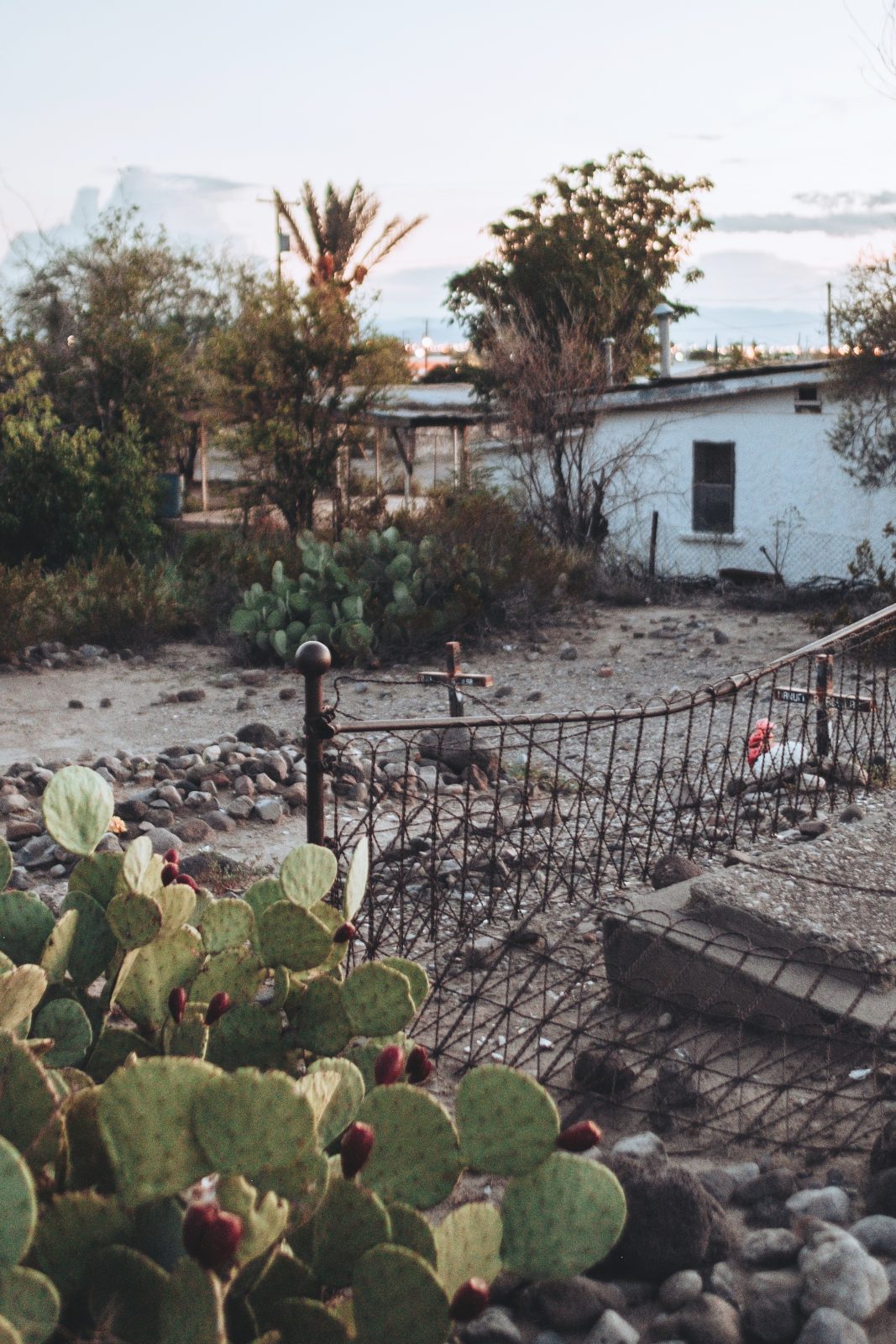 Photo by Hannah Gentiles for The Big Bend Sentinel / The historic Lipan Apache Cemetery in Presidio sits on a modest hill situated between neighboring houses, with mostly unmarked graves.

That said — while in need of maintenance — the cemetery has not been abandoned. And one recent effort to protect it was not limited to restoring just the grounds, but extended to preserving the history and significance of the cemetery to the Lipan Apache Tribe. Starting in February, the Big Bend Conservation Alliance, working alongside tribal members and descendants of those interred at the cemetery, sought to get a historical marker placed on the property.

In order to do so, the  coalition submitted an application to the Texas Historical Commission’s Undertold Markers program, which was established to “document significant underrepresented subjects or untold stories,” according to the agency’s website. Included in the application was a three-paragraph draft of the marker inscription that had been vetted by tribal members and enjoyed broad appeal from those who have intimate knowledge of the cemetery.

Months later, THC returned the marker inscription draft with significant edits — sparking outrage among those pushing to see a marker at the cemetery.

Yet THC was simply following its own internal procedure: Despite creating a program that attempts to showcase histories that few — including THC — know about, the agency retains full editorial control over a marker’s inscription, leaving little room for those connected to these histories to tell their own stories.

Because of this —  according to emails obtained by and shared with The Big Bend Sentinel — BBCA, Lipan Apache members and descendants of those buried have had to fight THC for a seat at the table to ensure that the marker’s inscription accurately represents and contextualizes the history of the cemetery.

While, at least for the moment, it appears THC has largely acquiesced to the wishes of the tribe and the descendants, the struggle this coalition had to endure highlights how the lofty ethos driving THC’s Undertold Marker program clashes with the system through which the marker gets made.

In early February, BBCA submitted a six-page narrative history of the cemetery alongside a 240-word text to go on the marker inscription as part of its application to THC. The text covered a number of topics, from the establishment of the cemetery to the history of the tribe’s migration to Texas and their continued presence in the Big Bend region today.

According to Christina Hernandez, who is a descendant of two separate families buried in the cemetery, the proposed inscription took extensive time, resources and political capital to draft. “It was exhaustively vetted by the tribal leadership, elders, scholars and descendants locally and outside Presidio County. The Tribal Council deliberated it in a regular meeting in the spring and approved it unanimously. The same language was also discussed and approved by local descendant families,” she wrote in an email to THC.

After months of silence from THC, BBCA followed up with the agency, only to learn that it had sent its own inscription draft to the Presidio County Historical Commission, whose job it was to forward the draft to BBCA and others — something PCHC had failed to do.

BBCA finally got its hands on THC’s draft earlier this month. And THC made several alterations to the tribe’s submitted draft. Here’s how THC’s draft opens: “Before their early 1700s first contact with the people of La Junta (the junction) of two rivers, Río Conchos and Río Grande, the Lipan lived on the great plains as a confederation of different bands.” Compare that to the original inscription submitted by BBCA: “The Cementerio del Barrio de los Lipanes (Cemetery of the Lipan Neighborhood) is a sacred site to the Lipan Apache Tribe.”

The descendants, according to Hernandez, had several issues with the historical commission’s version of the inscription. “THC’s current draft has numerous, egregious grammatical errors that make it hard to read and distract from what should be an inviting, positive first impression of the marker,” Hernandez wrote to the agency. The text, she wrote, was now disjointed, full of clunky appositives that distract from the content of the inscription.

In THC’s draft, the agency removed the paragraph discussing the historic roots of the Lipan, replacing it with a couple of sentences focused on the rocks that had been taken from the cairns. “Unconscionably, this draft language gives more space to the removal of the grave stones by the neighbors than anything else about the Lipan, all without indicating any disapproval of the pilfering,” Hernandez wrote.

Hernandez also expressed frustration with the way THC erased the historical significance of the cemetery to the tribe. “THC’s draft does not explain why the cemetery is worthy of a State Antiquities Landmark, other than the fact that it was started in the 1790s. It deleted the key insights that it is a longstanding sacred site, which the Tribe noted at the very top of its text, and that it marks the origins of the continuing Lipan community in the Big Bend,” Hernandez wrote.

According to the emails, BBCA, Lipan Apache members and descendants were not only taken aback by the edits, but also the system through which a marker is produced.

It is the exclusive duty of the agency to draft the inscription that will eventually appear on the placard. “The final wording, phrasing and punctuation of Official Texas Historical Marker texts are the sole responsibility of the Texas Historical Commission,” the agency writes in application documents. While THC invites sponsors and applicants to suggest edits, the decision ultimately comes down to the historical commission.

In fact, according to an outline of the agency’s historical marker procedures, the tribe should never have written a draft inscription in the first place — a key point BBCA said it was never informed of until recently.

“Discarding what was submitted by the Tribe and starting over with the THC as the primary drafter unfairly changes the process and discounts the role that the Lipan, both enrolled tribal members and local descendants of the interred, can possibly play in telling their story,” Hernandez wrote to the agency.

On September 13, Oscar Rodriguez, a tribal administrator for the Lipan Apache Tribe of Texas, emailed a director at THC to try and convey the tribe’s position on the matter. “I understand your need to vet the language submitted before it’s finalized in the name of your program. The Tribe has the same requirement,” Rodriguez said. “Our Council votes on the language on all documents, including markers, referencing the Lipan Apaches. Without that vote, it cannot be said that the Tribe has signed off on the marker.”

Following this pushback, the agency largely submitted to the requests coming from BBCA, the tribe and descendants, eventually returning to the coalition with a draft inscription that, while not identical to the original text submitted by the tribe, closely resembled it. A few days later both Hernandez and Rodriguez signed off on this new edition.

Despite a happy ending, THC has set up the Undertold Marker program in a way that gives little power to those petitioning for a marker and, at least in this case, have the historical knowledge to accurately write the inscription.

Yet the agency stands by its process. In a written response to questions from The Big Bend Sentinel, THC spokesperson Chris Florance wrote, “Official Texas Historical Markers are state of Texas property. The responsibility for writing the markers can’t be given to other organizations or to individuals; it’s ultimately the THC’s responsibility to write them.”