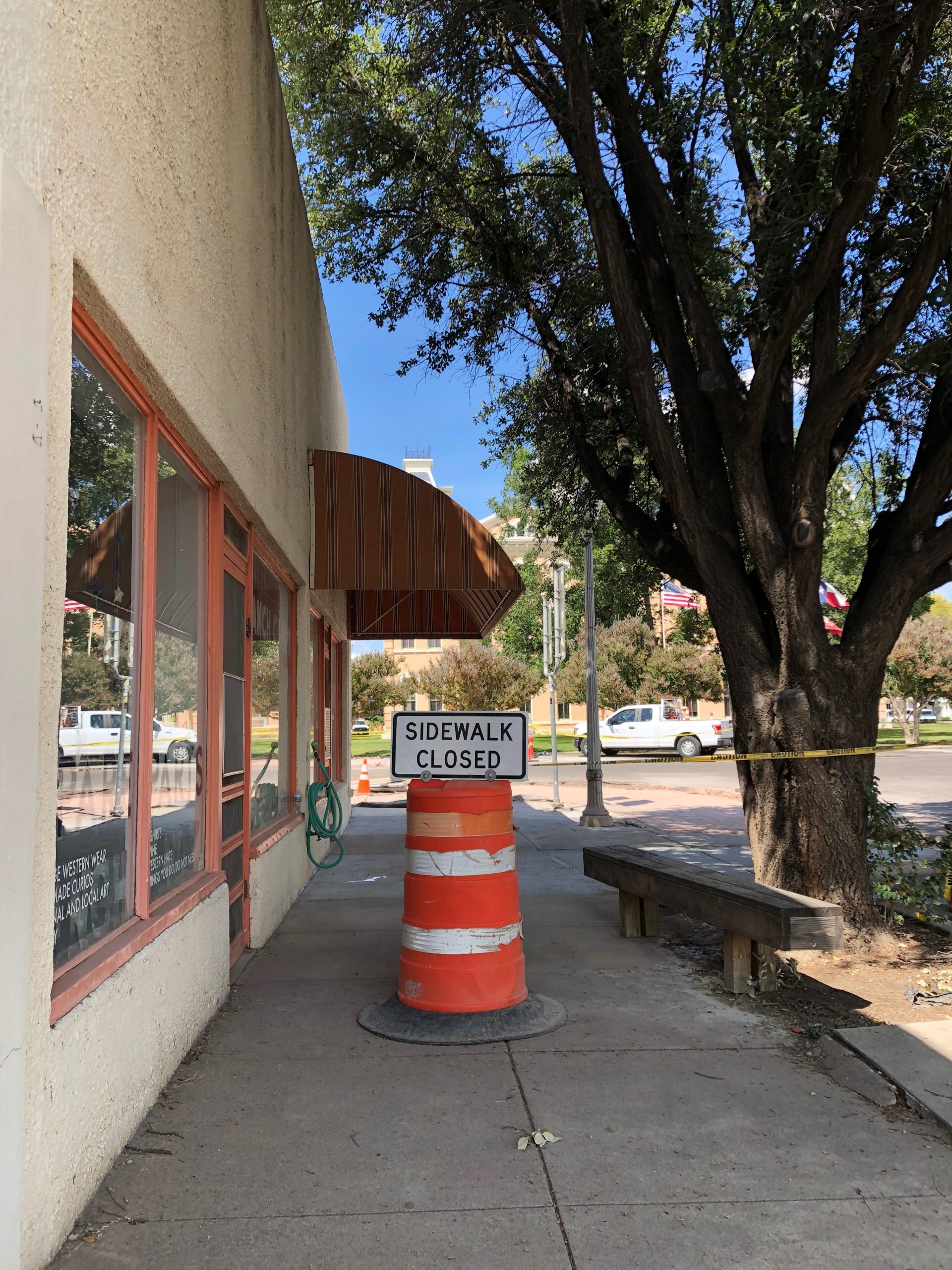 Photo by Sam Karas. Road and sidewalk closures have begun popping up around downtown Marfa.
Subscribe

MARFA — Residents and tourists alike have taken notice of the road construction near downtown Marfa as the project concludes its third week of an estimated eight week span. At press time, activity was concentrated in front of the fire station. Dean Street remained closed for repaving, with detours directing traffic through the neighborhood east of the courthouse.

Previous reporting by The Big Bend Sentinel explained that road improvements span the northern city limit down to the four-way stop. They include revamping the three-way intersection on the south side of the courthouse, adding pedestrian safety and accessibility features on sidewalks, and resurfacing the road with a spray paver to minimize noise and the amount of time the road is closed.

The road construction in Marfa is part of the Texas Department of Transportation’s U.S. 67 Master Plan, which aims to increase safety and mobility in communities along the highway between Fort Stockton and Presidio-Ojinaga. The Master Plan was developed with community input between 2017 and 2019, recognizing the growth of the region and its importance as a hub for tourism and truck cargo. Marfans are finally starting to see these plans put into action — during some of the busiest weeks for tourism of the year.

According to Laura Macias-Cervantes, a spokesperson for TxDOT, the project is proceeding according to schedule. She explained that the timing for this project was determined by when permits and approvals for proposals could be matched with funding. The process requires coordination between city, state and county governments, and lining up all the moving parts takes time.

“We are aware of the importance of tourism to the area and are working with the contractor to complete the project safely and with the least inconvenience to those impacted,” Macias-Cervantes said. “In this case, we have conducted personal outreach to businesses and will implement a faster paving method.”

Macias-Cervantes explained that TxDOT aims to move forward with considerations for parking concerns, access to the fire station, pedestrian traffic, impacts to trees and shrubs along the street, and the designation of the county courthouse as a historic structure. “Public involvement is a critical component of TxDOT projects,” she said.

Kate Calder, the owner of Communitie on Highland, has had a front row seat to the action on the city’s main drag. “We were pretty lucky with Trans-Pecos weekend,” she said, referring to a busy festival weekend that coincided with a number of road closures. “I noticed one day we were down to one lane in front of the shop, and by the next morning both lanes were open again, which we all appreciated because we were looking forward to having a strong weekend.”

Calder explained that as part of their outreach, TxDOT had distributed business cards to shop owners on Highland before construction began. She had also begun to see other business owners post construction updates on their websites and social media, but didn’t yet feel the need to alert potential shoppers. “Recently a customer came in and one of my coworkers started talking about the construction and the customer said, ‘No worries, Austin is always under construction.’”

She went on to say, “Marfa has a pretty limited number of things to do –– in a good way –– so I think people will still seek out those things, even if they have to move down the street a little differently.”