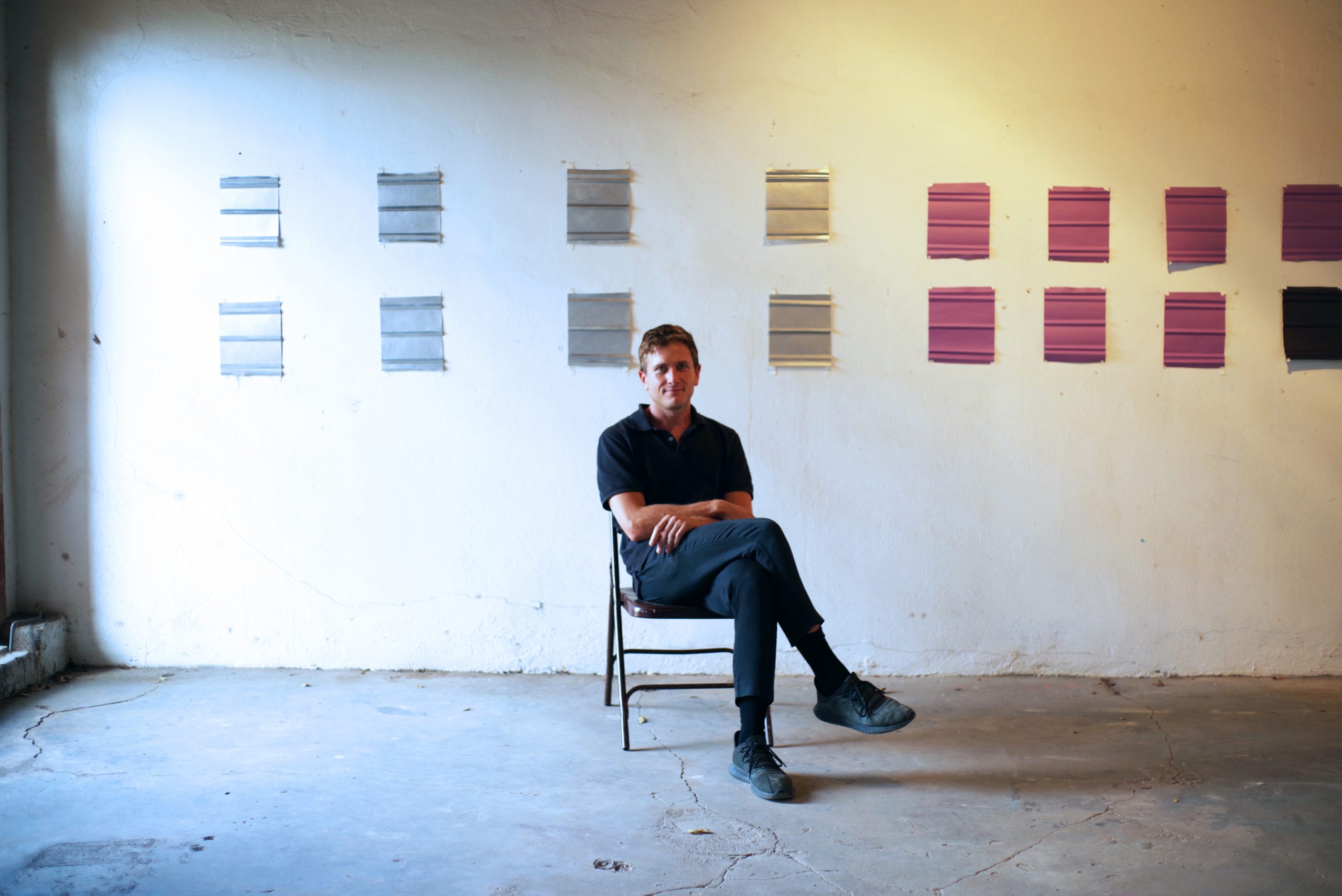 Photo by Kathleen Shafer. Alan Ruiz in his studio in Marfa. Ruiz’s Open Studio is on Friday, October 8, at the Locker Plant from 6 p.m. to 8 p.m.
Subscribe

MARFA — Alan Ruiz applied to the artist in residence program at Chinati “on a whim” during the height of the COVID-19 outbreak. He had been through Marfa a number of years ago, on a road trip, and recalls how the Dan Flavin installation at the Chinati Foundation, untitled (Marfa project), left a lasting impression. “I knew I always wanted to come back,” Ruiz said.

Born in Mexico City, his family moved to New York, where he currently lives and works. Ruiz studied painting at Pratt Institute and then Yale University, but it was at Yale that he became more interested in architecture and its relationship to social and cultural systems.

“My work has always had a kind of discursive relationship to minimalism,” says Ruiz. “I feel like my practice is indebted to those histories and I am often critical of those histories, and also try to work with them in a way, but I have a deep love and [Marfa] felt like a special place to come back to, to think about inhabiting or living alongside that work, which is one of the most amazing parts of the residency — seeing work in a way that I might not necessarily have access to as a visitor.”

Ruiz is the first researcher to be on the grounds since the archive has been fully processed, says Hannah Marshall, the archivist for the Chinati Foundation. Chinati had never had an archivist on staff, adds Marshall, but there have been various people working with the archive throughout the years, with some attempts to “impose order” on it.

The Big Bend Sentinel previously reported on the Chinati Foundation’s receipt of a Mellon Foundation grant of $525,000 in 2018 in order to organize the archive. This work was completed in April of this year, and allowed the museum to hire an archivist. While the museum has remained largely closed for the duration of COVID-19, it has proven a good time to work through the processing of the archive.

“Now the emphasis is on digitization as much as we can,” adds Marshall, “so we can handle the physical material less and share it more broadly.”

Ruiz has been focused on the Flavin materials in the archive, which in his words account for “a lot of diagrams … and organizational correspondence between Marianne Stockebrand and Steve Morse, and technical drawings.” Stockebrand, the former director of the museum, worked for many years with Morse, conservator for the Dan Flavin Studio, in order to bring this vision of the museum to fruition.

Ruiz believes that untitled (Marfa project) is one of Flavin’s best works, “in terms of the system that it creates through memory.” The installation is the only one at the museum that is artificially lighted, utilizing fluorescent lamps, a trademark material for Flavin.

In his studio practice, like Flavin, Ruiz is interested in ready-made materials and has been working mostly with new corrugated metal while in residence. The pieces are on tracks, and visitors will be able to move them around. He views them as prototypes because of their smaller size and imagines creating them on a much larger scale at some point.

“It’s a test,” says Ruiz. “I’ve never made something that required some kind of participation.” Because the pieces are moveable, no one position is privileged.

Ruiz has focused on utilizing standardized materials and “how those materials index a kind of politics or index a social dynamic.” He has used electrical conduits, LED safety lamps, plywood, plexiglass, MDF, stainless steel, aluminum, glass and rubber in previous works. His work is often site specific and in relation to the surrounding architecture.

Ruiz is also interested in the relationship between art and development, and Marfa is no stranger to either. He has been especially interested in the “adobe tax” and what he refers to as the “aesthetics of gentrification.”

“I think it’s public or common knowledge at this point that Marfa is changing,” says Ruiz, who is interested in applying what he has done with his previous work in New York to a place like Marfa. “It’s really more about the question of global cities and their repeat-ability.”

As part of his residency and the Chinati Open House weekend, Ruiz will speak about his research in the archive. The talk, “In a New Light,” will allow Ruiz to “read Flavin’s work through the context of systems.” Fans of both Dan Flavin and Donald Judd might readily cite a particular simplicity in the work, using materials that one would have been able to procure at any hardware store, but Ruiz is interested in not only encountering the work in its pure form; there are other dynamics at play, including larger public and privatized infrastructures. Since the Flavin piece at Chinati is run on electricity, Ruiz would argue that it’s tied to this larger electrical grid and system.

“I’m very interested in social systems, and in particular group relations, and I think Flavin’s work lends itself to that kind of thinking.”

For Ruiz, it’s important to bring historic work into the present in order to keep it fresh and relevant, and to ask new questions. “If we rehearse the same narrative around these artists they’re bound to kind of not be relevant to our social lives in this way.”

Ruiz’s Open Studio is on Friday, October 8, at the Locker Plant from 6 p.m. to 8 p.m., and his talk is on Saturday, October 9, at 3 p.m. behind the USO Building, where CDC-recommended protocols will be observed.