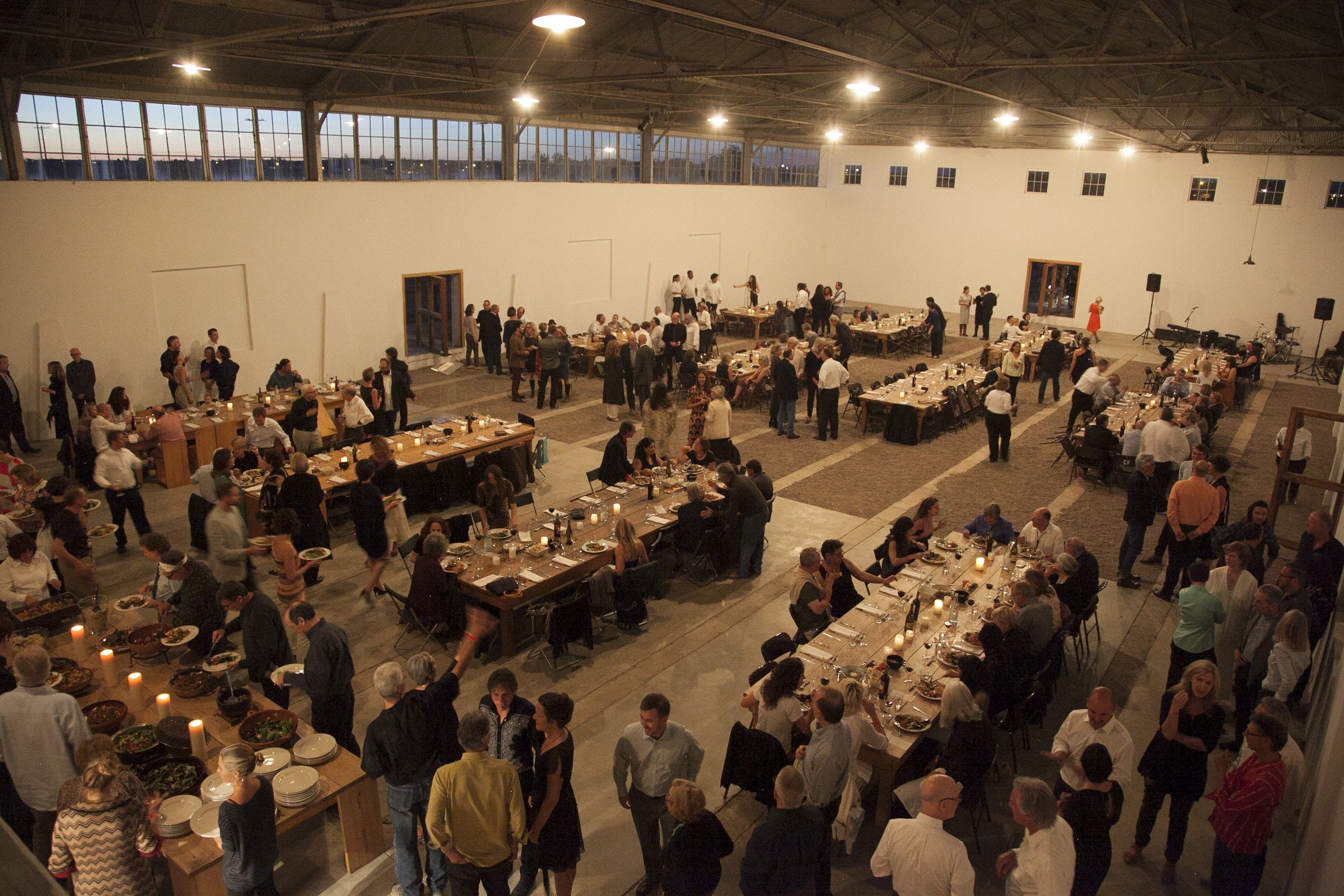 Guests take part in the food and music of the Chinati benefit dinner inside the Arena in 2012.
Subscribe

MARFA — When the Chinati Foundation reopens to the public this week to celebrate its 34th Open House weekend, it will be doing a lot of things differently than in previous years.

Besides the CDC-recommended protocols in place to keep people outdoors and socially distanced, the Open House dinner on Saturday will be free and open to the public. Long-term residents of Marfa will remember the earlier years of the annual October celebration, when Highland Avenue was shut down and tables were set up in the middle of the street. It was a memorable event with music, food and community.

“I do have fond memories of the outdoor Highland dinner,” says artist Valerie Arber, “because it was cool to sit in the middle of the street, and it was really nice with the lights hung up across the street.” Guests enjoyed Texas fare such as enchiladas or BBQ and were entertained by mariachi music.

From asking various residents about the transition from a closed-Highland Avenue to a ticketed Arena dinner, where Chinati has historically done a lot of fundraising, the anecdotal stories say one thing: the year that Sonic Youth played in Marfa, in 2007 was the year that “broke” the town. It’s not clear that this singular event forced Chinati to cease its downtown dinner locale, but it certainly did not help. Sterry Butcher, a former reporter for the paper, remarked in the issue preceding that weekend, “this is perhaps the most ambitious in terms of programming, logistics, and the number of people who are expected to arrive.”

The Chinati Foundation, the Judd Foundation, Ballroom Marfa, and Charles Attal — a board member of Ballroom and founder of C3 Presents — hosted the illustrious concert, held at what is now the Capri. And Marfa was not the Airbnb-infused town that it is today. The Hotel Saint George did not exist. Eager folks from Austin, San Antonio and Houston slept in cars by necessity, thrilled to see Sonic Youth play in such a unique venue. Chinati’s dinner was earlier in the evening at 6:30 p.m. on Highland Avenue and the band’s performance began at 10 p.m. The concert, remembers Arber, “brought in every college kid in Texas. It taxed the whole town.”

After that year’s chaos, Chinati had, until the pandemic, introduced its springtime Community Day in 2008, where food and entertainment were provided by the museum in the Arena. This allowed the museum to celebrate the local community during a separate event from the fall fundraiser.

This year the donor-focused events will happen apart from Saturday’s free dinner, with tickets ranging from a discounted $600 for tri-county residents and existing Chinati members to $25,000 for a Presenting Sponsorship. All tickets and sponsorships are sold out.

Jenny Moore of the Chinati Foundation is “open to everything always,” when asked about the fluidity of the annual event. And whereas in previous years, the Marfa Lights Festival and Chinati Open House were often the only big tourism draws, “so many events have developed in that time.” Additions to the annual calendar include Trans-Pecos Festival of Music + Love, the Agave Festival, the Marfa Open Art Festival, Marfa Invitational and Viva Big Bend.

The other fundraising events this year will allow all of the public programming to take place. Individuals could purchase a ticket, at the various donor levels, or sponsor a specific event.

While last year’s event had to be moved to an online platform, it proved to be a welcome addition to the way Chinati programs. Atwood recalls hearing from visitors from around the world who have never been able to make the journey to Marfa but were excited to be able to be a part of the online programming.

This year, she’s excited to have people back in Marfa. “Every year we see familiar and longtime visitors, donors and supporters,” says Atwood, “but every year we get many people that have never been to Marfa.”

Although Atwood and Moore do not know when the museum will be able to reopen officially, this weekend will allow visitors to again tour the interior spaces. The museum had previously reopened in May for self-guided outdoor walking tours only.

“Chinati was meant for public viewing and that is our ultimate goal,” adds Atwood. The museum will remain flexible and continue to adapt as it has had to over the past 18 months. “I’m excited to get back on the sidewalk.”

The Open House dinner takes place on Saturday at the Arena between 6 p.m. and 10 p.m. There will be inside and outside seating available. Texas fare will be served and there will be mariachi music played throughout the evening. Everyone in the community is invited to attend this free dinner.