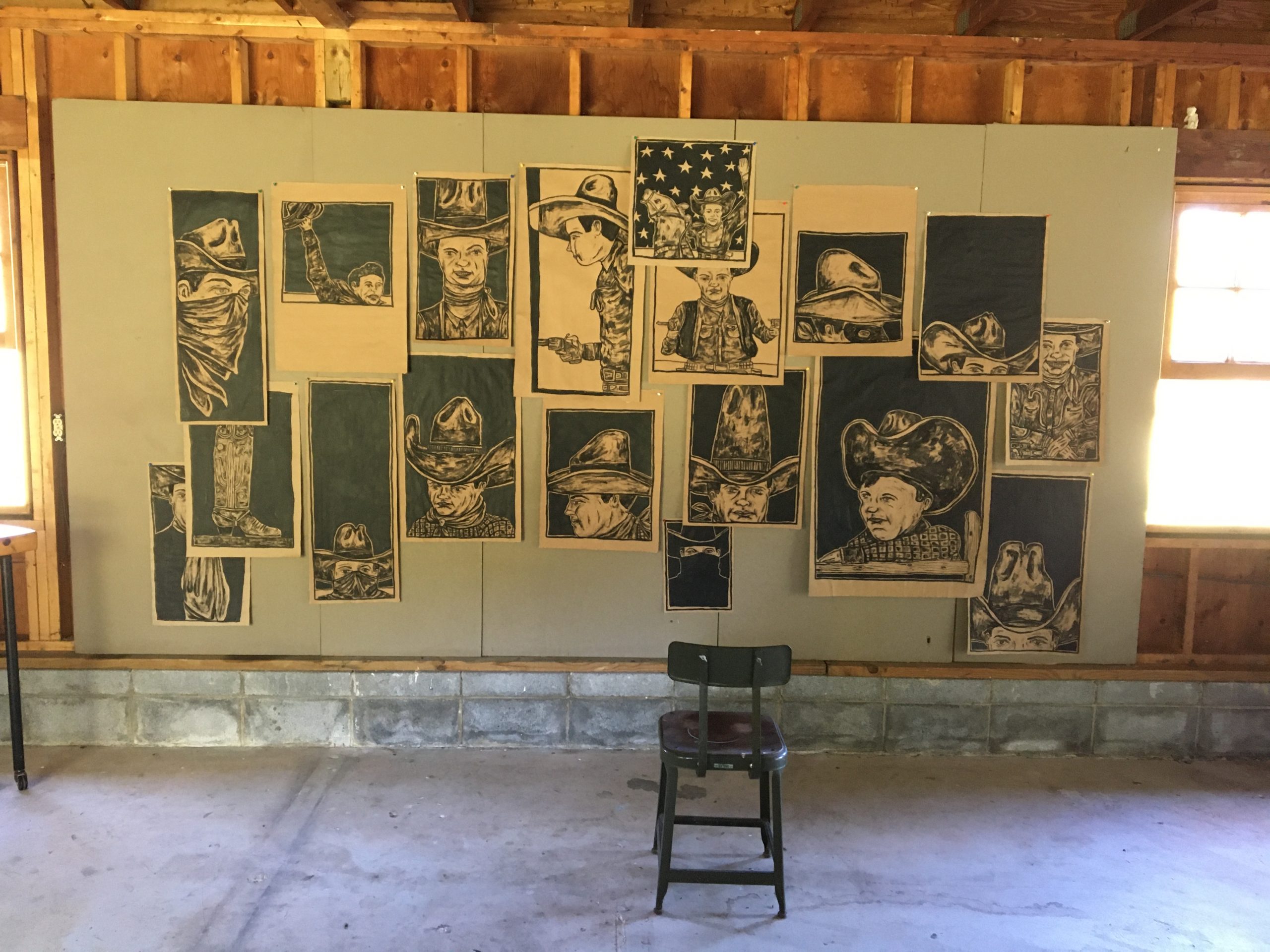 Photo courtesy of Fort Guerin. An exhibition of new works by Fort Guerin will open at The Sentinel on Friday. Guerin’s work draws inspiration from 1940s and 1950s cowboy comic books and western movie posters and this new series of works pays homage to the newspaper by sticking to an all monochrome, black palette.
Subscribe

MARFA — An exhibition of new works by West Virginia artist Fort Guerin will open at The Sentinel on Friday. Buckaroos, outlaws and cacti dominate the works, as Guerin draws inspiration from 1940s and 1950s cowboy comic books and western movie posters.

Guerin was raised in Mesa, Arizona, where saguaro cacti and dusty mesas figure prominently in the landscape, and the mythos of the Old West has long stirred his imagination.

In his dry brushed tempera on paper, Guerin silhouettes the weathered faces of Western characters, often in ten gallon hats. Each piece reads like a single panel from a comic book, a film still or the cover of a Western pulp fiction novel. Drawing inspiration for this exhibition from The Sentinel’s adjoining newsroom, Guerin stuck to an all monochrome, black palette for this new series of works.

Though he majored in sculpture in college, he soon shifted his focus to painting. “It’s very expensive to do sculpture and it takes a lot of space, which was great when you’re in college with a studio and classes,” he said. But out in the world, he said, “You find out real fast it’s hard to pursue unless you have a big work space,” he said, “And it’s not as immediate.”

In those early years after college Guerin found immediacy in painting, however he didn’t know what the focus of his work would be. He gravitated toward painting with cheap tempera on paper, because it was less costly than using expensive oils and was an easy way to not get hung up on the costs while trying to find his style.

When he moved from Arizona to Washington D.C. about 20 years ago, he was still in search of subject matter. It was in D.C. that Guerin found a comic book store in his neighborhood that would shape the focus of his artwork. Among the volumes and issues of comics, Guerin found 1940s and 1950s cowboy comics that informed his work going forward.

Though he’d found his primary subject matter – the Old West – the cheap tempera had gone from a temporary tool to a permanent fixture of his work. He’d also uncovered an ethos of trying to make his work accessible, and affordable, to those who are sometimes kept from accessing art.

“I like to have some stuff that’s always accessible to people. Galleries have always had that intimidating factor where sometimes people are afraid to walk in, or feel out of place in them,” he said. “If you like something, I believe you should be able to own some of it, so I try to have stuff available in a moderate price range so you can take something home with you.” For him, that’s smaller works that are in the $100 price range.

Two pieces of the artist’s work have hung in The Sentinel since it opened in 2019, and after receiving countless inquiries about their origins, The Sentinel reached out to Guerin to put together an exhibition.

Kicking off during Chinati Weekend, the exhibition has a variety of new works created by Guerin for the Marfa show. The exhibition will be on view from October 8 to 10, 7:30 a.m. to close.

Disclosure: The Sentinel is a coffee shop, restaurant and bar owned and operated by the editor and publisher of The Big Bend Sentinel.