New kids on the blockchain: NFT art gallery makes its home in Marfa 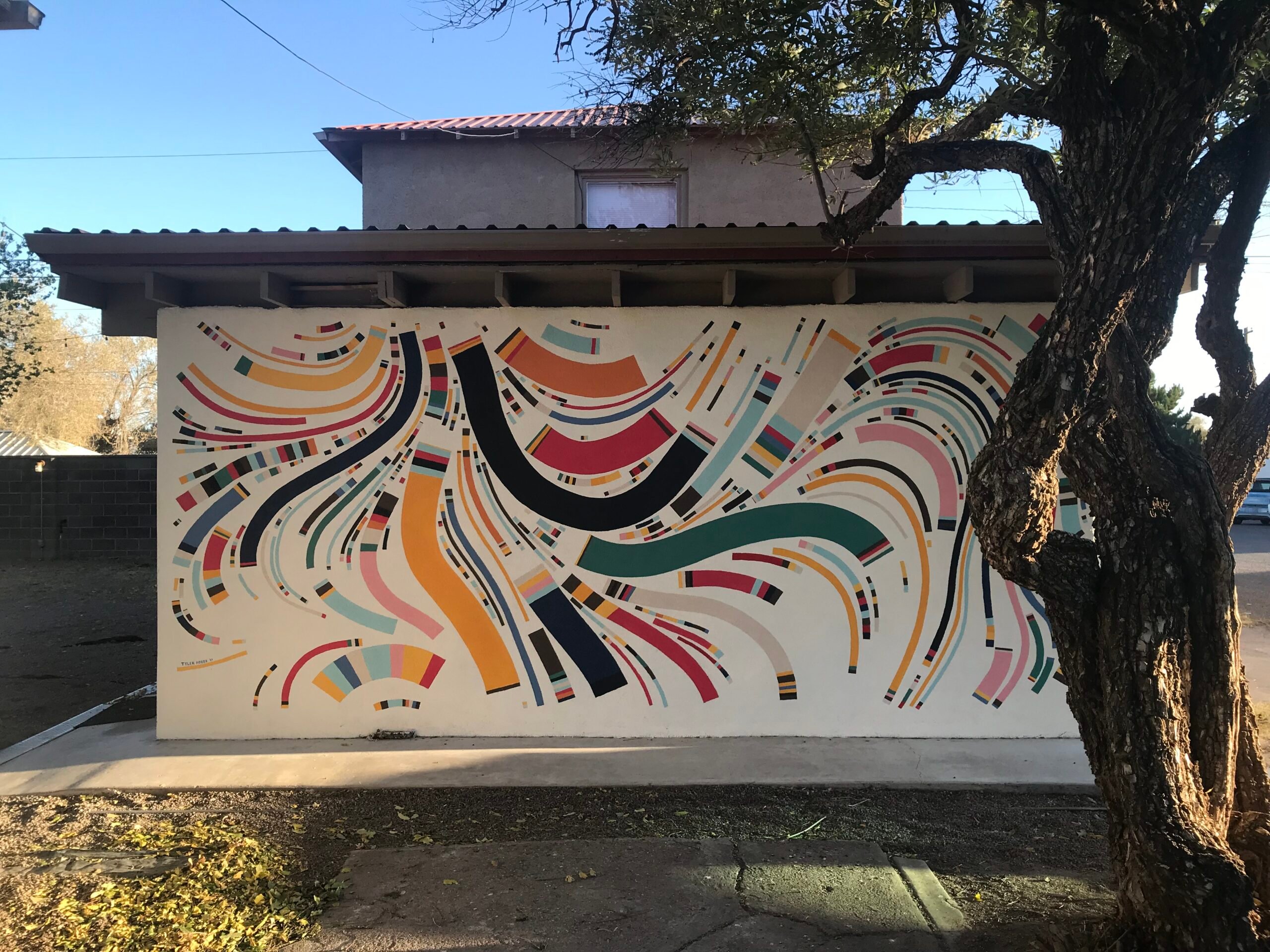 A new mural by digital artist Tyler Hobbs adorns a wall on the Art Blocks property in Marfa, where the digital generative art platform has made its physical home. Photo by Abbie Perrault
Subscribe

MARFA — Earlier this month, as Chinati Foundation threw open its gates to Chinati Weekend visitors and art galleries around town mounted their latest exhibitions, a new enterprise at the corner of Austin and San Antonio streets opened with a bang, drawing in a crowd of over 300 people, ranging from Chinati Weekend regulars and curious Marfa locals to cryptocurrency enthusiasts and a new and entirely different generation of art collectors.

Inside the house-turned-exhibition space lies Art Blocks, a first of its kind platform conceived of by Houston tile importer Erick Calderon, where “generative” art is stored on the Ethereum blockchain. While the technologically savvy and financially-speculating crowds have joined the bandwagon for this new, booming digital artform, some Marfa artists and locals came to the table with curiosity or skepticism about Art Blocks, its artistic merits and its place within Marfa’s remote artistic enclave in the West Texas desert.

At a town hall on Monday afternoon in the Art Blocks’ backyard, Calderon hoped to introduce the burgeoning technology to Marfans and explain why the company had chosen Marfa as the physical space for its digital platform.

Before any conversation could begin on the finer points of Art Blocks, Calderon had the hurdle of explaining what exactly the blockchain is, how it stores art and why that’s revolutionary not just in the cryptocurrency world, but the art world as well.

In 2017, Calderon claimed his first non-fungible token (NFT), a piece of content or art that is stored on the blockchain — a digital ledger where data is spread out across countless computers and systems, rather than stored in one location that could be corrupted.

The blockchain’s ledger serves as a digital provenance, proving exactly when an individual purchased that NFT, and tracking any future change of ownership in perpetuity. While anyone can save a digital file from the internet to their computer, the blockchain formalizes a place where people can undeniably prove ownership rights to digital work.

NFTs can be any piece of digital art that’s uploaded to the blockchain, but after Calderon’s first NFT purchase, he began dreaming of a platform specifically for generative art, where artists create an algorithm that generates a series of works. It begins with an artist writing an algorithm that produces a number of pieces that each look different, changing based on what the artist chooses to be a variable or a constraint in that code.

In the testing phase, the artist may see that the algorithm, for example, spits out a muddy combination of green and brown that they don’t like, Calderon explained to listeners on Monday. If the artist wants to make sure that doesn’t happen, they can go in and revise the algorithm again and again, until they’re satisfied with the various images the algorithm begins producing. “But once it’s uploaded [to Art Blocks], the artist can’t control or regulate what pieces come out of the algorithm as buyers begin minting pieces,” Calderon said.

Bidders line up to the virtual auction block, bidding on, for example, one of 1,000 works that the algorithm will be making. Only after the work is purchased does the algorithm produce the piece of art, so buyers only have a general sense of what the work looks like from a sample image the artist provides, but don’t know exactly what they’re buying until it’s already purchased.

In that way, it also permanently tracks a connection between the art and its artist, which allows platforms to build in a new way for artists to profit from the success of their art, even in the secondary market. In the traditional art world, an artist may profit from the initial sale of their work, but if the buyer turns around and sells it for double the price, the artist doesn’t see any of that additional cash flow. On many platforms in the NFT space, an artist can get a percentage of all secondary sales.

“I think NFTs are, as legal documents, as contracts, incredibly advantageous to artists in a way that hasn’t been accessible previously,” said one Marfa-based artist and curator, Lauren Klotzman, in an interview this week. That change is something they hope will eventually influence the way artists operate in the traditional art world.

Calderon told the audience that Art Blocks generated over $100 million in primary sales in its first year. On the secondary market, work generated through Art Blocks has garnered over $1 billion, translating to $50 million in the pockets of various artists on the platform. Calderon said 30 of the platform’s artists have now quit their main jobs to pursue NFT artmaking full time.

The company has also grown to 15 employees, including one Marfa resident, with hopes to add another soon, and the gallery in Marfa will have regular hours for visitors to learn about NFTs, the blockchain and the history of generative art. While many of the works in the building are newly minted NFTs, displayed either through digital screens or printed out on paper, one room of the gallery boasts artworks from the 1960s, ‘70s and ‘80s that represent the earliest versions of algorithmic, generative art.

On Monday, the founder told a crowd of around 40 Marfa residents at a town hall event that he drew inspiration for his iterative art and its platform from none other than the biggest art name in Marfa — Donald Judd.

“One of my favorite works of all time is the 100 untitled works in milled aluminum by Donald Judd,” Caleron said, explaining that each of the 100 works has an identical footprint but is slightly different on the inside. “Each one belongs to that initial set of rules and initial body of work,” he said.

The gallery’s first exhibition catalogue reads, “Even though it wasn’t coded in JavaScript and rendered on a computer, Judd captured the ideas of permanence and variability—two core tenets of on-chain generative art.”

Klotzman, who works with media from video to printed matter in their gallery LTK Enterprises, said of Art Blocks, “I’m all for new forms of art,” contextualizing the company’s arrival within the broader shifts in Marfa. “There are these industrial shifts over time that shape the way the architecture of the town is,” be it tourism, art, mohair or cattle, they explained. “And we’re seeing an industrial disruption in the act of collecting with NFTs. You might call that art collecting, you might not,” they said with a laugh, but seeing this broader art world shift arrive in Marfa has been “mind blowing” to Klotzman.

Judd is the reason Calderon picked Marfa as home to Art Blocks headquarters, despite the company not really needing a physical space to carry out their transactions. The twist for Art Blocks’ Marfa space is that it’s not a traditional gallery where works are sold; no art can be purchased there, which Calderon said is because he wanted to make a place in Marfa where anyone could walk in and no one felt pressured to buy anything.

The aesthetics of the NFT art created on the platform range widely, from Calderon’s series of Chromie Squiggles — iterations of candy-colored-gradient scribbles — to pixelated fields of color that move in three dimensions, or computer generated mountain landscapes that could be mistaken for traditional screenprints. Buyers can print the art off at whatever dimension they like and as often as they want, but the real ownership is the token on the blockchain that proves the art is immutably theirs.

NFTs have broken through into the mainstream, where even major art auction houses are now breaking into the market. Calderon’s platform grew along with the swell, and his own purchases of NFTs appreciated in value, allowing him to buy the Art Blocks building in Marfa this year.

Some in the town hall audience asked about the technical jargon or how they, as more traditional artists, could put their work up for sale in the NFT space.

While Calderon acknowledged, “There’s a bunch of crap out there,” since anything can be an NFT, he said his company set up a curatorial board, so that some projects are lent more credence than others.

Christopher Wool, a Marfa resident and artist, lamented that aesthetics were not a part of Calderon’s presentation. “You only talked about money and technology, you didn’t talk about aesthetics,” Wool said. “Everybody has their own definition of art, but we’re not hearing your definition of art.” While Calderon agreed, he said this is a new generation of art, for a new audience. “To us it sounds like art without aesthetics or criticality,” said Wool.

Wool also rebuffed the likening of Judd to iterative or generative work. “I think it’s a total misunderstanding of the Judd art piece to talk about chance. Those arrangements were extremely important to the aesthetics.”

Klotzman, who attended the gathering Monday, also questioned the connection between Judd and iterative and generative art. “There’s definitely some extreme authorship happening with Judd, even if you have a hundred iterations, they’re very, very selective, in terms of the drawing and authorship,” they said. “The thing with NFT minting is it’s a reduction of labor. You’re setting up a code structure to generate art, but where is the artwork, where is the work in the work of art? The reductive impulse is towards labor, which is wild, and I think, takes some humanity out of it.”

In contrast, Klotzman argued, “I don’t think Judd wanted to take the humanity out of art, I think he wanted to have you examine your humanity in relationship to an object.” Nevertheless, the local artist called Art Blocks “an interesting development in art collecting, and dealing with collecting,” adding, “The hegemony of the contemporary museum art world is being called into question.”

At the town hall, printmaker Robert Arber asked, “Where is the soul?” to which a fellow audience member replied, “As far as soul, it is in the coding.”

“The code is your paintbrush,” said Calderon. “We’re explaining our intentions as artists with code.”

The question of “Is it about art or money?” became a central topic during the town hall question and answer period. While algorithmic projects on the platform used to take weeks to sell all of their hundreds or thousands of works within a series, now they sell within days or hours. “That’s based on massive rampant speculation that we’re kind of trying to fight,” Calderon conceded to the audience.

Calderon said there’s talk in the NFT space that those looking to buy these digital artworks are price speculating, hoping to buy at a low price and sell at a high one, or that “it’s all just about the money,” he said.

He’s skeptical, though, pointing to the one hundred people from the Art Blocks crowd that attended the sunrise viewing of Donald Judd’s 15 untitled works in concrete on the Sunday morning of Chinati Weekend. If it was just about money making, Calderon posits, “those people wouldn’t have woken up at 7 to see those pieces.”

Calderon said the sudden influx of money into the NFT space has led his platform to make philanthropic contributions, and he plans to put money into foundations in Marfa or support programs that educate local students in how to code and use that skill creatively.

Jeff Mattheis who works in the arts in Marfa responded to Calderon, saying, “I do think it’s very important you mentioned future philanthropic things. It will be important for this community. There’s a lot of talk of money coming in and trading hands, and it never reaching the people that are working and living here.” 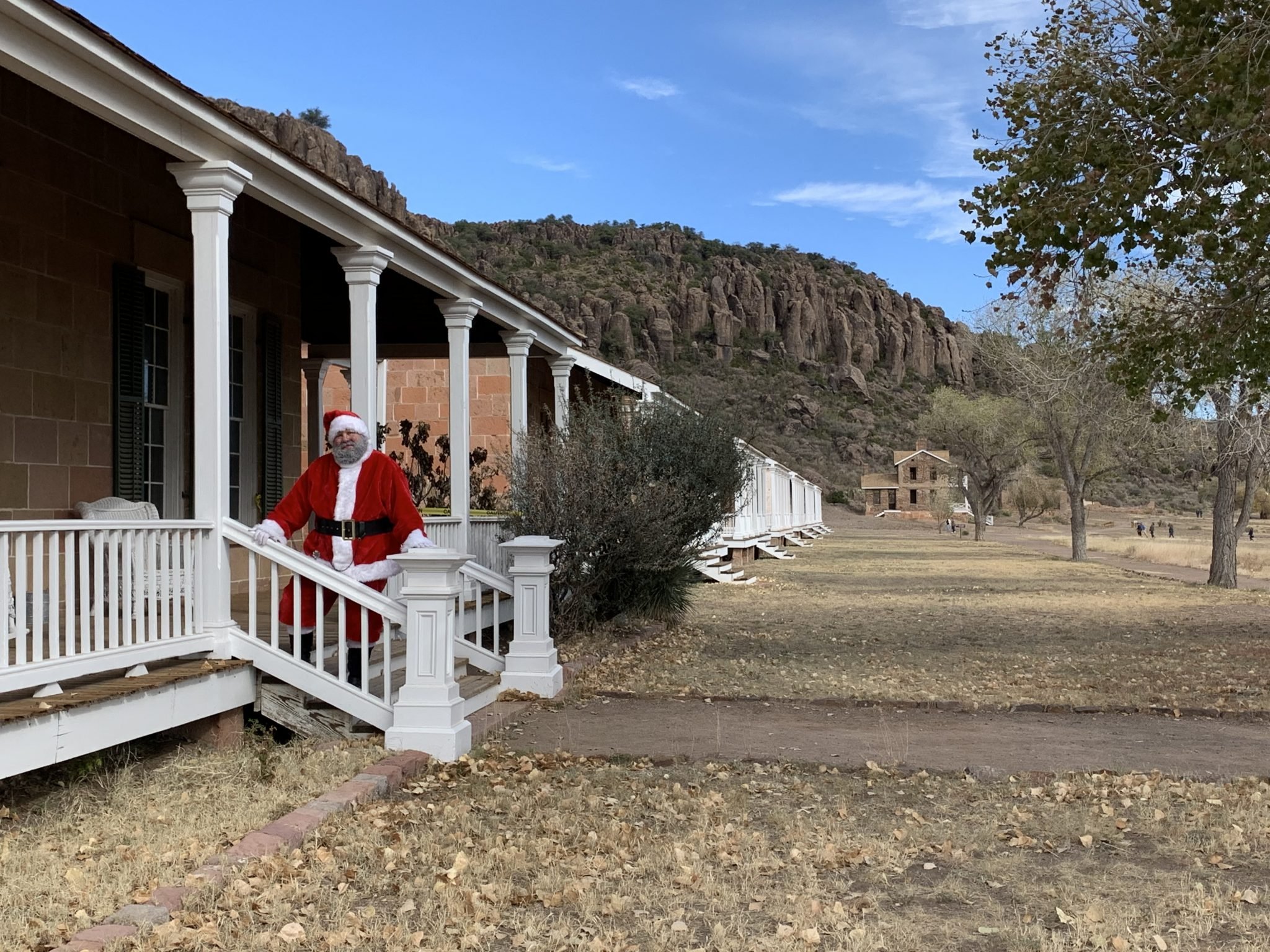 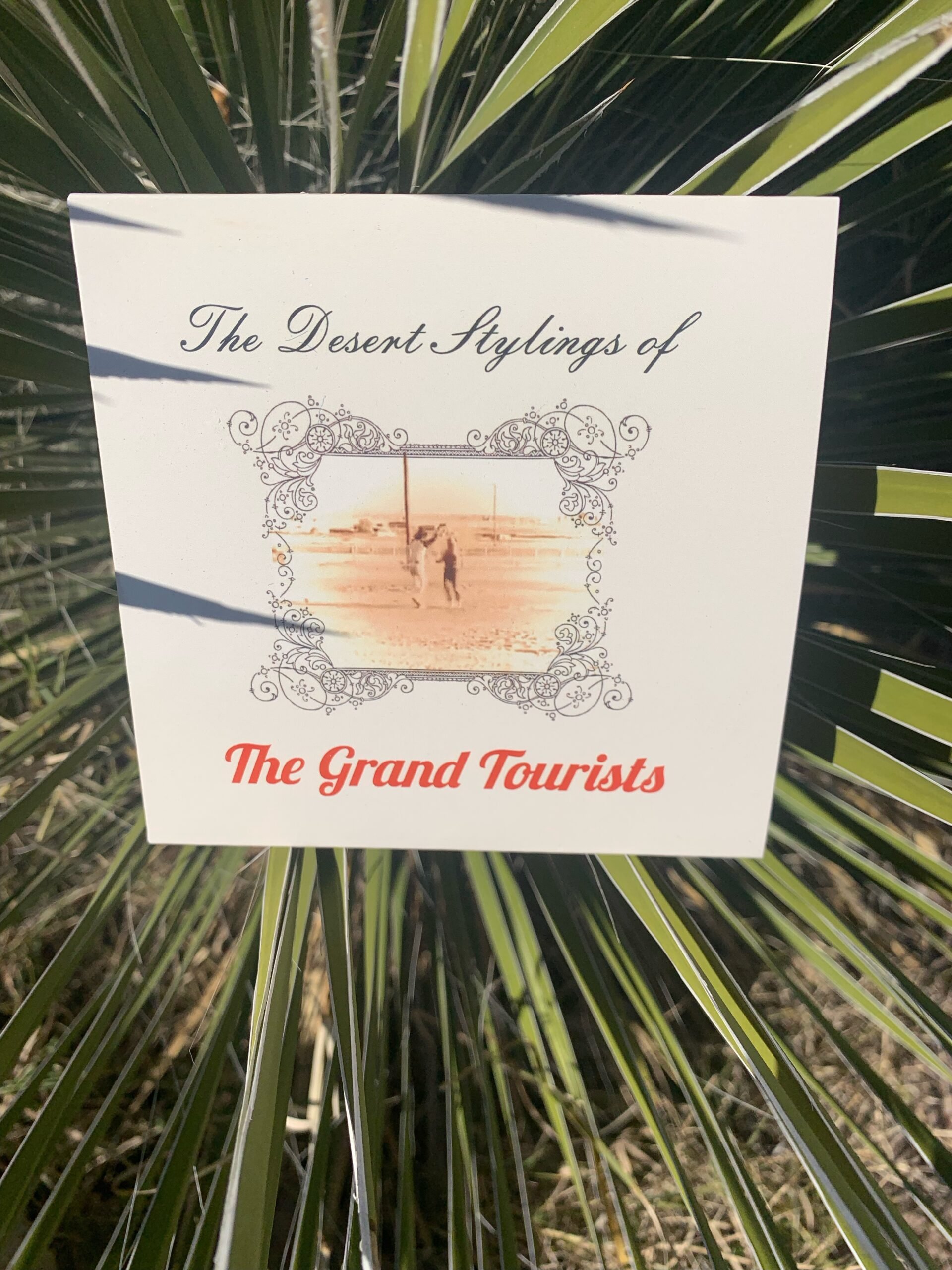 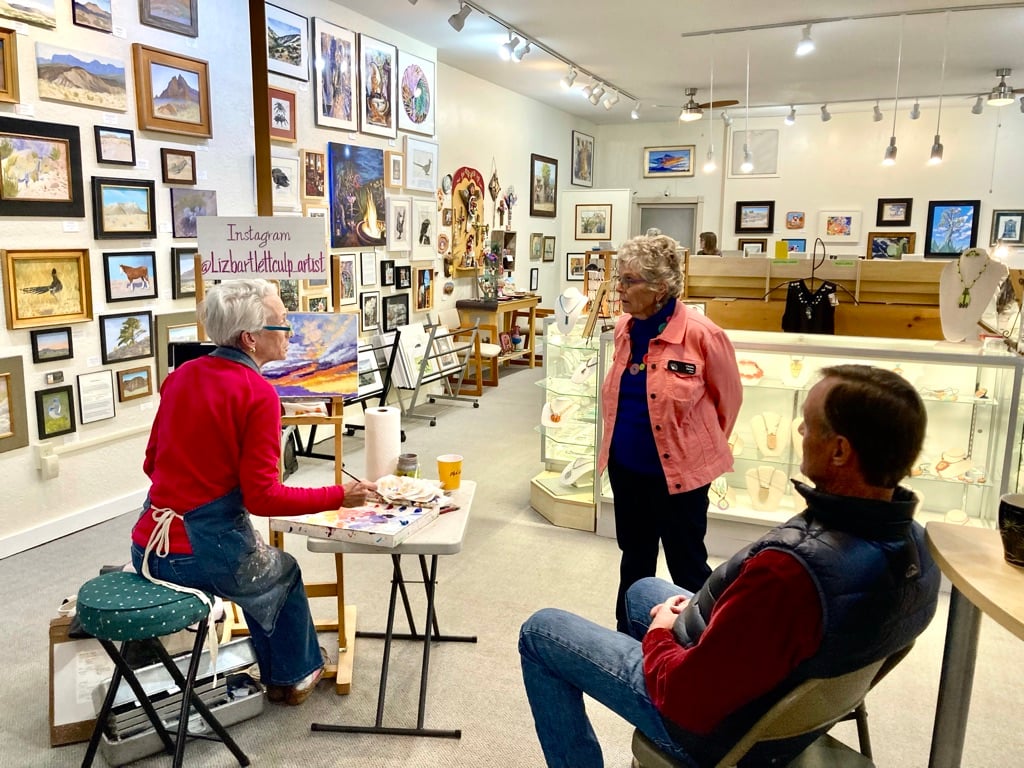