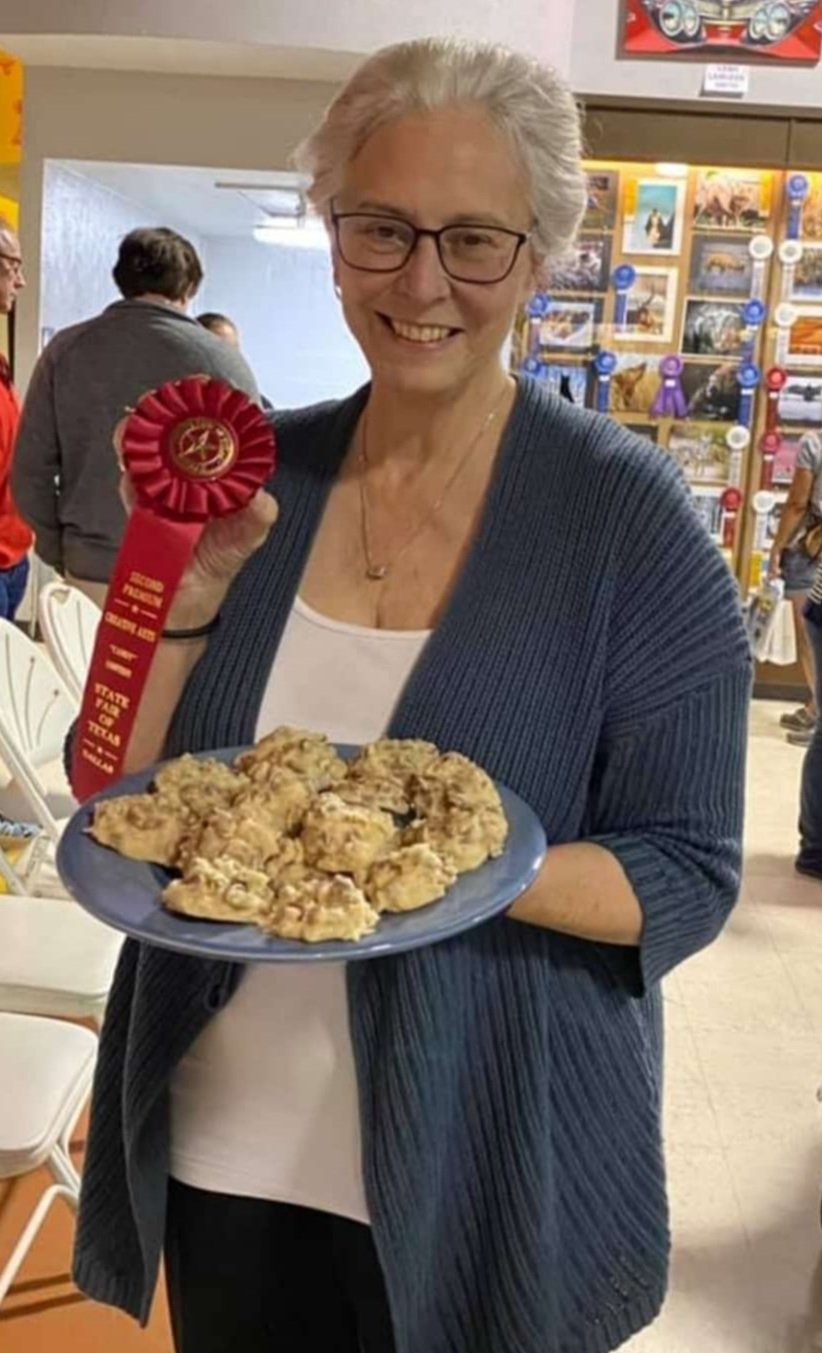 DALLAS — Fort Davis baker Barbara Curry said that when she heard the judges at the Texas State Fair in Dallas name her coconut pecan pralines the second best in the state, she “just went bonkers with excitement.”

For about 10 years, Curry has made a point to try and try again, submitting a variety of pies, breads, cheeses and confections to the state fair’s competitions. She was shocked when her earliest foray — homemade caramels based on her mother’s recipe — came in third place the first year she entered.

“My mom was a baker,” Curry said. “She wasn’t the best in the world at cooking regular food, but boy could she make candy and cakes. I feel like I’m kind of channeling my mom when I do this.”

That first taste of victory led her to another third-place win in 2012 for a coconut cream pie, and again in 2019 with a boozy bourbon chocolate chess pie. In the years in between, she had some breads that didn’t take the cake and a particularly mix-reviewed, allspice-infused pimento cheese that contorted one stoic-faced judge’s face into a look of disgust, as Curry recalled with a laugh. “She got the most horrible look on her face, and I’m sitting there cracking up, because it was just so funny.”

“It’s just fun,” Curry said of her yearly entry into the fair, before tacking on a caveat. “I mean some people are out for blood, are highly competitive and bring their entries in in a wagon,” she said. That’s just not her style, though. Instead, her favorite part of the fair is the camaraderie that she’s found between bakers in the stands.

Despite nearly a decade of entries, a higher prize than third place had evaded Curry’s grasp until 2021 rolled around. The theme of the fair this year was “Howdy, folks!” welcoming back visitors from Texas and beyond to the Dallas fairgrounds after the COVID-19 pandemic led to the fair’s 2020 event being canceled.

Curry, a retired professor from Dallas, became a full-time Fort Davis resident during the pandemic, settling in as a full-time volunteer at the Fort Davis National Historic Site. But her move away from Dallas and a year off from the fair didn’t deter her from throwing her baked goods into the ring once again when the fair reopened to the public.

This year, she found the recipe for her pralines on the internet. “They don’t have to be original recipes; the judges just look at how you interpret it,” she explained. Once Curry picks a recipe for the year, she gets busy tweaking it, hoping to perfect it for judgement.

On the floor of the fair, the judges sit in the middle of a circle and runners ferry trays of goodies, along with the recipes to accompany them. Usually stone faced, the judges sample the treats and have the runners read the recipes aloud, considering each morsel. “They have to have real poker faces, they can’t even give you a hint of what they might be thinking,” she said, but, she added, “I always feel like if they take a second taste that’s a good thing.”

Describing her prizewinning coconut pecan pralines, Curry said, “They’re not the chewy kind, they’re more crispy and sugary. They will make your teeth hurt, they’re so sweet.” She said she often tells her friends and taste-testers, “You may only want to start with half of it.”

The judges weren’t deterred by the sugar rush, handing Curry her first red ribbon for a second-place finish. As the fair wrapped up and she cleaned up her entry, she thanked one of the judges for the honor, to which the judge replied, “Oh! Those were so good. We had such a hard time deciding between first and second.”

“I almost wish she hadn’t told me that,” Curry said, laughing again at how close she came to taking the top prize. For now, that blue ribbon, first-place finish is still something for Curry to aspire to.

Depending on the weather in Dallas come the 2022 fair, she said she may attempt a divinity recipe — a light, whipped up egg white treat that is prone to wilt in humidity. “I’ve also got a flourless chocolate cake that I’m looking at doing. I’ve tested it, and it’s really really good, but it will need some perfecting before I take it to the fair.”