COLUMN: A studio visit with the cartoon drawings of David Tompkins 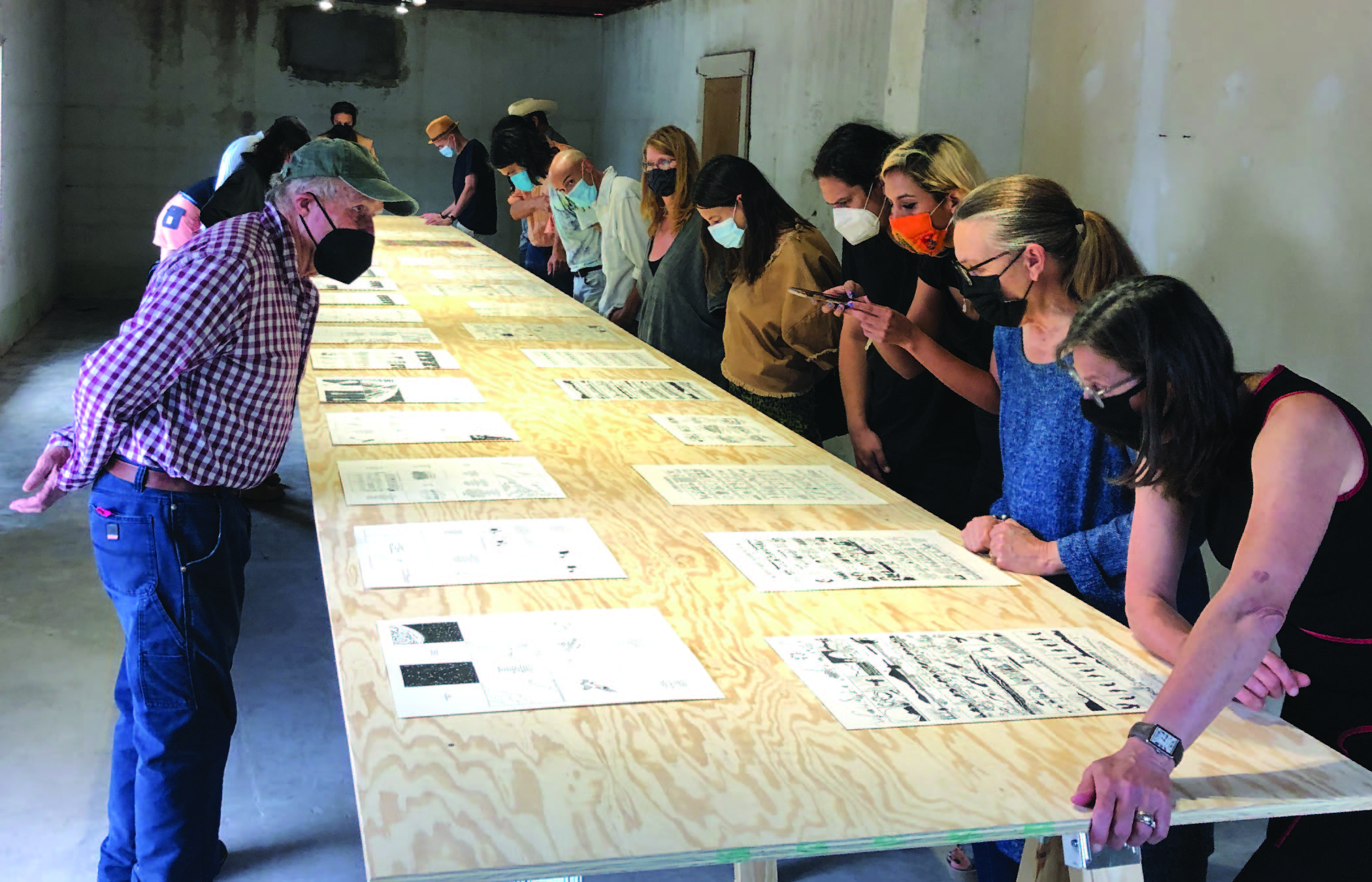 The level of concentration was remarkable. How often do you find yourself in a space full of people quietly pouring over works of art? I never visited David Tompkins’ studio, but this introduction to his work had the intimacy of a studio visit. The immersive state was greatly due to the sensitive and workmanly installation, which had been created by the artist’s friends at Marfa Book Company on South Kelly Street. The rough adobe interior was entirely occupied by one behemoth table with many sawhorse legs, upon which some 30 drawings were displayed. The act of viewing the works came close to making them — to bending over a table or desk to draw. Standing shoulder-to-shoulder, friends, neighbors and other familiar faces (all protectively masked) moved around the table, quietly studying Tompkins’ art and performing another intimacy: one of mourning, through communion with his work, an artist who had recently passed from our small community.

Tompkins was a cartoonist in the richest sense. Technically, a cartoon is what you call the underdrawing for a fresco painting. Historically, cartoons have been animating art with storytelling since people first drew. And as everyone who has picked up a comic knows, cartoons are funny papers. Tompkins was no fresco painter, but one can see from the traces of lines and lots of erasure how carefully he drew in pencil before he started inking with pen and brush. Occasional spots of white-out further indicate Tompkins’ graphic precision. His use of tagboard was also in keeping with the cartoonist’s craft: when it comes to making art for mechanical reproduction, you want a surface that is smooth and sturdy.

Cartoonists create characters who go on adventures that are dangerous, mysterious, romantic, silly, or, best, an alloy of quests as strong as the artist’s imagination. One of my favorite works by Tompkins is an ambitious 16-panel drawing that acted as sort of a key or codex to his pantheon of stories by assembling his various characters, like tiny action figures, on the branches of a giant tree. The way Tompkins turned the structure of the tree — its trunk, boughs, roots and canopy — into one big cartoon space reminded me of Winsor McCay’s fantastically composed full-page episodes of Little Nemo in Slumberland. As a tree of knowledge, Tompkins’ cartoon reveals an artist deeply grounded in Nordic myth, the golden age of comics, and other more idiosyncratic realms of creation.

There is old Odin hanging from a branch of the tree while his son Balder, the wisest and most beautiful of the gods whom no one can harm, gets shot by an arrow. The monstrous snake Niohöger guards the way to the underworld, which happens to be located at the base of this very tree, the sacred tree, Yggdrasil. All feature in other comics by Tompkins, including one based on the opera spin-off from the Germanic lore, the Ring cycle by Richard Wagner, who we find anxiously occupying a branch with his champion and nemesis, the “superman” philosopher Friedrich Nietzsche. Beyond them in the sky, we see a tiny biplane crashing, a reference to German artist Joseph Beuys’s self-made creation myth, involving flames, felt, rebirth and yak butter. Appearing as another of Tompkins’ cartoon characters, Beuys has a strip in which he talks about art to a dead rabbit — something the shamanistic artist actually did. “Listen, mac, you mind laying off the mumbo jumbo a little?” quips the hard-boiled hare.

Perched on opposite limbs of the great tree are two more of Tompkins’ many talking creatures. Hugin and Munin are a pair of crows, who, like their Terrytoons cousins Heckle and Jeckle, are a couple of tricksters. The installation included one full-color newsprint page showing the cartoon that Tompkins self-published. In this episode, Hugin and Munin are dispatched to the underworld by Odin, who wants “news of the doings of the dead.” The birds return to report: “Hell stinks and a wolf is gonna eat you.”

Acerbic and sweet, Tompkins’ sense of humor is the existential glue that holds together A Project of Bird. Impossible to condense, suffice to say these 16 cartoon drawings bring together Albert Einstein, Evel Knieval, Captain Ahab, J. Robert Oppenheimer, Marcel Duchamp, Werner von Braun, Walter Benjamin and Phineas Gage (the historic survivor of a brain-injury; look him up) for one BIG BANG of a story. It ends with a fleet of visionary rocket ships — including a vintage Bird in Space by the sculptor Constantin Brancusi — busting through Earth’s layer of gravity and entering the universe. “Thar she blows,” intones our “orbital DJ” and cowboy narrator Walt Dangerfield, echoing the nuclear finale of Stanley Kubrick’s film Dr. Strangelove. Art Spiegelman’s graphic novel Maus and Ad Reinhardt’s satiric art world cartoons also feel not far outside the frame of Tompkins’s intelligent attempt to make sense of a tragicomically creative modern world.

The most immediate references for us viewers were to be found in Tompkins’ full-page Marfa cartoons. How did he manage to hold together on a page such wide affection for his adopted hometown and cynicism about its ever ongoing gentrification? Humor, of course. A speculative future of the town imagines the Quanah Parker Bubble Teahouse, a Wymann’s Dog Bakery and Bail House, and, in a nod to the artist Donald Judd — the force who has probably factored most in the town’s recent real estate transformation — the Specific Objects Antiques shop. Most instructive is Tompkins’ adaptation of a 1965 manual, “How to Make an Adobe Brick,” with its elegiac understory simply conveyed by drawings of family photographs of the generations of Mexican Americans who have built this town. Then, like a siren’s call to believers and doubters alike, is Tompkins’ take on the train. “Clackety-crack. Rickety-wrack: Cold down. Old tracks,” the toon begins. “Soft morning, Marfa! Happy new year, little town,” it ends.

This afternoon, I went with Alan Ruiz, who is currently the artist in residence at Chinati, to pay a visit to Rosario and Robert Halpern. As the former owners of The Big Bend Sentinel, the Halperns shed light on Tompkins as a contributor to the paper, whose talent they recognized by publishing his cartoons throughout the aughts. I would also like to thank Jeff and Mark Tompkins for illuminating their brother’s work as a cartoonist. I look forward to returning to this column after a holiday hiatus.

Ingrid Schaffner is a writer and the curator at the Chinati Foundation.