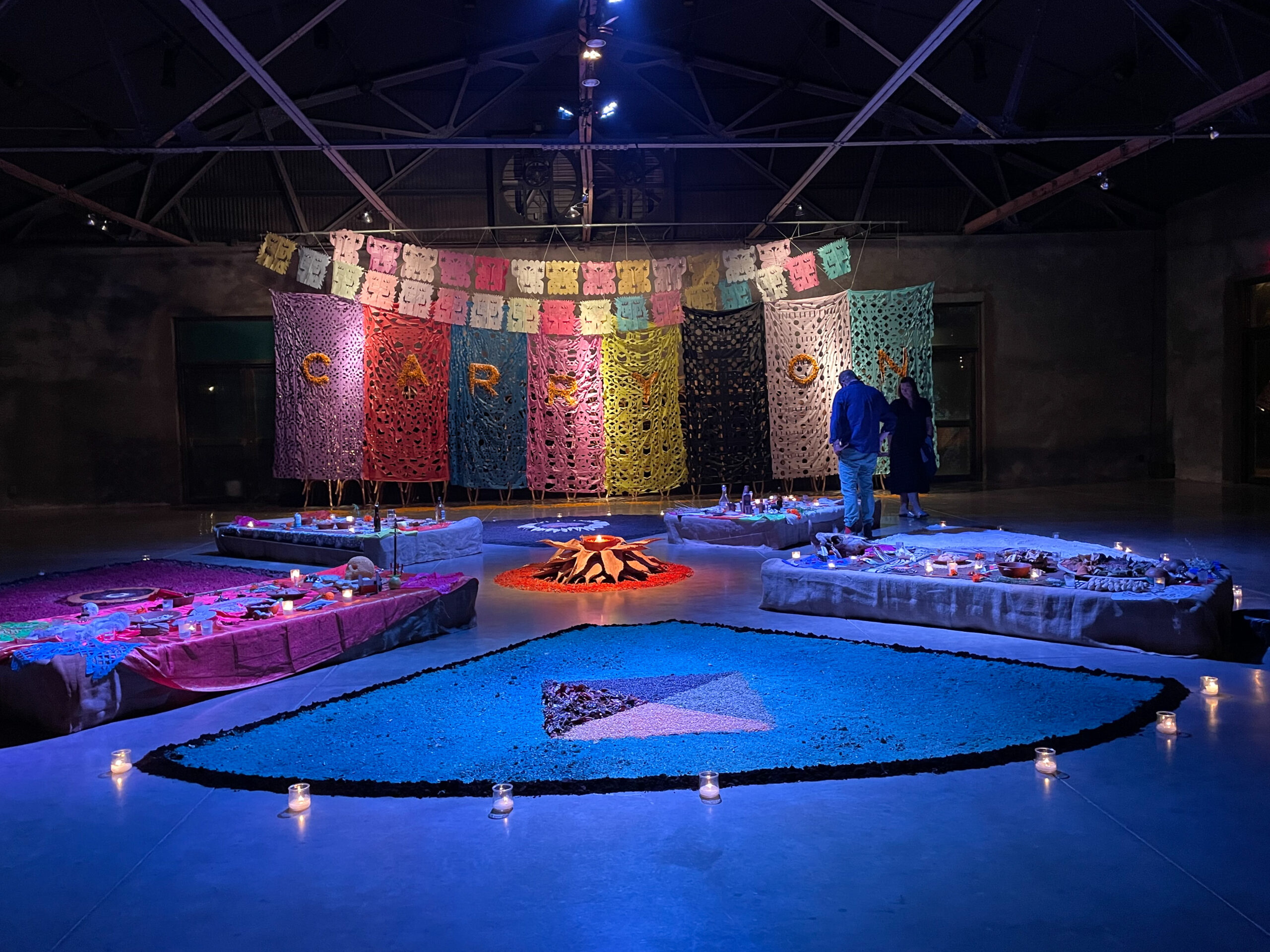 An ofrenda created by Vicente Celis and held at the Capri marked Día de los Muertos and commemorated the lives of many Marfa loved ones this year. Photo by Hannah Gentiles.
Subscribe

MARFA — This week, many Marfa residents observed the traditional Mexican holiday Día de los Muertos to pay their respects and remember family, friends and the unknown or forgotten who have died.

Ofrendas at the Capri, Marfa Open and Marfa Studio of Arts welcomed visitors, who came to place candles, photographs, flowers, precious items and favorite foods in honor of those who have passed away.

Vicente Celis, a Marfa resident who has assembled an ofrenda at the Capri since 2017, said that along with the usual visits, this year there were people who came all three nights, spending extra time with the photos of loved ones. 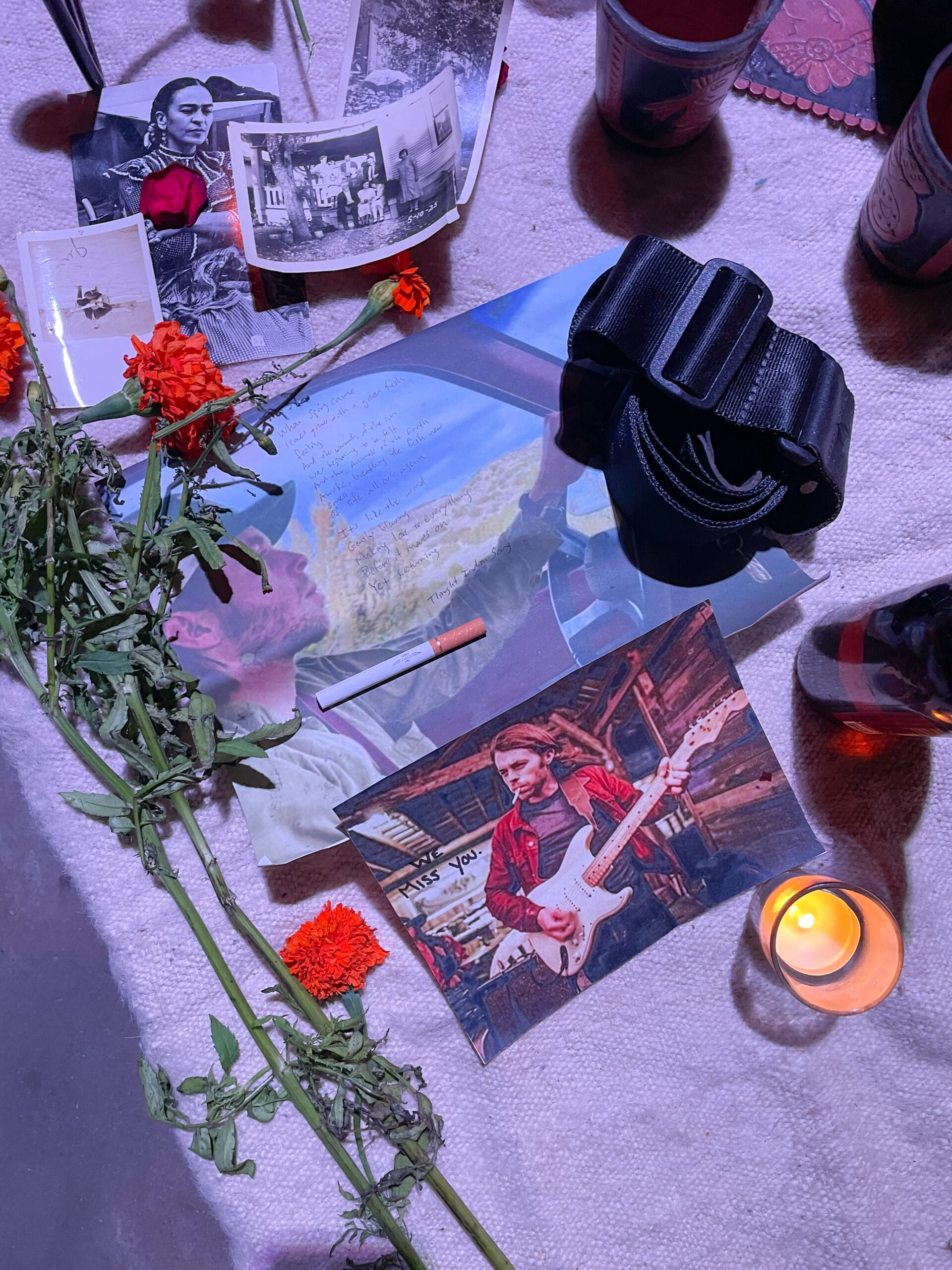 Friends contributed photos and meaningful objects in honor of the late Marfa resident Greg Enlow alongside remembrances of other community members who have passed away at the Ofrenda de Día de los Muertos, created by Vicente Celis and held at the Capri. Photo by Hannah Gentiles.

Celis’ ofrenda is composed of nine elements, including four rectangular altars, “Each to put offerings to family, children and pets, the unknown or forgotten and friends,” he explained. Celis, with the help of a handful of community members, built the ofrenda out of organic materials.

Four segments representing water, air, dirt and fire lie between the altars, and in the center is the ninth element, a clay pot filled with water, marigolds and a candle, sitting on the husky remains of an agave. “It’s an old dead agave, but we brought it back to life,” Celis said.

“They come alive when people put pictures, candles and flowers,” Celis said of the ofrenda. On the altars, some leave behind letters or poems to their late loved ones. Others come and speak. This year, students visited the ofrenda and wished happiness to Marfa teacher Sophia Sullivan who was killed in 2018, and let her know they were doing well.

Marfa resident Sandro Canovas, who built the ofrenda at Marfa Open this year, at first faced frustration when the $300 of traditional marigold flowers he wanted to bring to the ofrenda were indefinitely held up at the U.S.-Mexico border, as customs inspected them for bugs and quibbled about the amount of soil attached to the roots.

The flowers never made it to the ofrenda, but Canovas said what was most important to him this year “was that the community had a space to grieve and honor the members of the community that passed in the last year because of COVID or the ones that passed recently.” At both ofrendas, photos of community members like Jeffrey Hester, Ben Castro and Zandralina Acosta, who have recently passed away, were placed on the altars.

“It was really beautiful to see in the last couple of days of the ofrenda that people that were not Mexican or Mexican Americans took the invitation to bring the photos of their loved ones in the altar and spend quite a bit of time there with them,” Canovas added.

“This year to me was very special because we have lost so many dear friends,” said Celis. “I was very close to Jeff Hester. I felt special, because we would cook together, we would do trips, and we’d hang out very nicely. But then I realized that he did that with everybody. But to me, he was very dear.”

Last time Celis made an altar, in 2019, Hester and Christy Miller helped him deconstruct the entire ofrenda when the event was over.

In homage to Hester, who was in a coma when the ofrenda was assembled, Celis glued the words “CARRY ON” in white onto the papel picado that covered the back wall. It was a phrase Hester often said in parting. When Miller told Celis of Hester’s passing on November 1, he pasted marigold petals to the words for his late friend.

“It’s a beautiful tradition that I hope we can start to understand a little bit more,” Celis said. While he grew up making altars with his family, as he met indigenous people, he learned of the difference between an altar and an ofrenda. “An altar implies sacrifice and this is not about sacrifice. Contrary to what we’ve been told, ancient people from this land did not do sacrifices. There’s no concept of sacrifice in nahuatl,” he said. Instead, “It’s about life and death.”