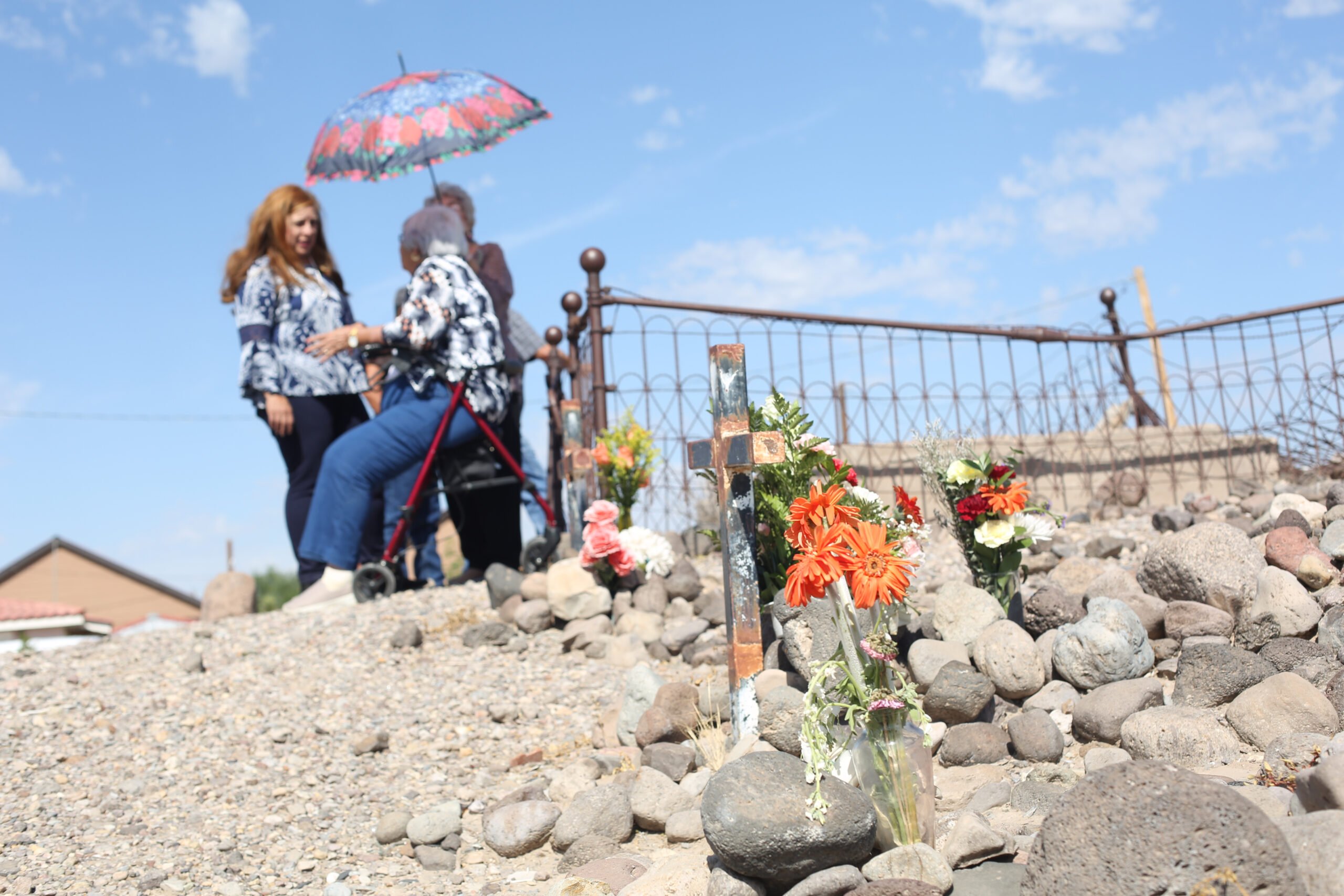 Alicia A. Jimenez and Amelia Portillo, whose ancestors are interred in the cemetery, meet with Presidio County Judge Cinderela Guevara at the site. Photo by Hannah Gentiles.
Subscribe

Over the course of two years, the city and county fretted over who should care for the cemetery. Its history dates back to the 18th century, when the Spanish granted reservations to the Apache near the Río Grande as part of a peace settlement. Some Lipan fled the area; members of the Prairie Grass band stayed behind. They married into other families in what’s now Presidio and the present-day Mexican village of El Mulato, about 20 miles downstream.

This cemetery is not the only Lipan cemetery in the area — small, privately-tended cemeteries dot the landscape from just north of Presidio and south to Redford. This is just the only one in the middle of town. It’s not too far from Porter’s grocery store and the bustling businesses on O’Reilly Street. You could miss it, if you didn’t know what you were looking for.

A simple wire fence staked into buckets of concrete is all that marks its boundaries today — or what’s left of them. Family representative Christina Hernandez explained that the cemetery used to take up the whole block before it was swallowed by the city. There are a handful of abandoned houses hugging the base of the mound crowned by a row of simple crosses with the name Aguilar. “Where the houses are, they basically razed that part of the cemetery,” she said.

For much of the cemetery’s history, descendants of the interred have been its primary caretakers. Presidio community members have pushed back against urban encroachment for decades, but previous reporting by The Big Bend Sentinel explained that the land wound up in the hands of government entities in the ’90s, complicating attempts by descendants to protect and improve the site. First on the list of improvements is a real fence to mark the space as sacred and special, off-limits to errant bicyclists and dog walkers.

At a commissioners court meeting on October 13, family representative Christina Hernandez and Big Bend Conservation Alliance Executive Director Shelley Bernstein explained that construction of the fence would require the services of an archaeologist and ground-penetrating radar. Their estimate came to between $40,000 and $60,000 — and has since grown. “We’ve been told we can expect to triple that,” Bernstein said on Tuesday, to an audience of county officials and Lipan descendants.

Presidio County’s decision to authorize a land transfer back to the Lipan Apache is a groundbreaking shift in government policy toward indigenous people in the era of the Land Back movement, which aims to “return indigenous land to indigenous hands.” According to a 2014 figure from the Texas Politics Project, only 4,705 acres of land in the nation’s second-largest state has been allotted by the state for indigenous groups.

In the Big Bend, the only other land owned by a tribal organization is Chilicote Ranch outside of Valentine, a 70,000 acre property owned by the Ysleta del Sur Pueblo, headquartered in El Paso. The ranch was purchased with earnings from the Pueblo’s casino, and is home to the tribe’s herd of cattle.

In other parts of the country — like the Black Hills of South Dakota, where the movement originated — Land Back has been marked with tense confrontations between protestors and police. That couldn’t be further from the reality on the ground in Presidio, where the radical act of returning land to a tribal government was born from one family’s quiet desire to take care of their own and one local government’s desire not to pay for it.

Enrique Madrid, a Jumano activist and historian from Redford who has worked to protect the cemetery for decades, couldn’t think of a historical precedent. His wife, Ruby Madrid, has had a front row seat to his struggle to represent indigenous interests in regional conflicts, spanning the drug wars to the Trans-Pecos pipeline to the proposed border wall. “Everything was taken from the natives — first the land, then the artifacts,” she explained. “Then the people were all but driven out of Texas.”

The Lipan Apache arrived in Central Texas around 1600, beating the Spanish to the site of present-day San Antonio by almost a hundred years. Lipan were present for the founding of a mission at Presidio; they were witness to the storming of the Alamo. Despite its important role in the Lone Star state’s history, the Lipan Apache Tribe of Texas only became formally recognized by Governor Greg Abbott in 2019. Their application for federal recognition, filed in 2012, is still pending.

Federally recognized tribes are regarded as “having a government-to-government relationship with the United States” and are eligible for certain types of funding, according to the Bureau of Indian Affairs. Despite Texas’ vast and diverse indigenous history, only three groups are recognized federally and three are recognized by the state.

The Lipan Apache Tribal Council has reached out to individuals of these families to personally invite them to apply for membership. “What we’ve been told by the Lipan representatives is that we never left the tribe, we’re just returning to our roots,” Hernandez said.

After a long process of holding family meetings to talk about the future of the site and keeping a close watch on local politics, Hernandez feels a sense of relief. “Now we can move forward with the plans to preserve it,” she said.

The fence project has already received a pledge for $10,000 from Amerigroup, which provides funding and health insurance services through the Presidio clinic. “We also want it to be an educational and cultural site, so we’re putting a lot of thought and care on how to prevent erosion and also create an environment where people can learn more about the Lipan tribe,” Herdandez explained.

The Ornelas and Aguilar families, along with the Big Bend Conservation Alliance and the City of Presidio, are launching a public information campaign to try to retrieve rocks that were taken from the cemetery. As the city expanded around the site, neighbors took cairns from the mound to use in landscaping and construction projects. To the Lipan Apache, the cairns aren’t just decorative rocks — they’re sentinels that stand watch over the deceased.

Members of the tribal council are planning a visit to Presidio in late November to hold a ceremony to return the cairns to their rightful place. If you know of the location of any of these rocks, you can place them along Market Street in the cemetery grounds. If you would like help transporting the rocks to the site, please text or call Elvira Hermosillo at 281-744-5254 or email [email protected].

“It’s an honor for the city,” said Mayor John Ferguson at a special ceremony held at city hall and in the cemetery on Tuesday — incidentally, the day many in the area celebrated Día de los Muertos, or Day of the Dead. “I’d like to congratulate the Lipan on the return of their land so it can receive the respect it deserves.”