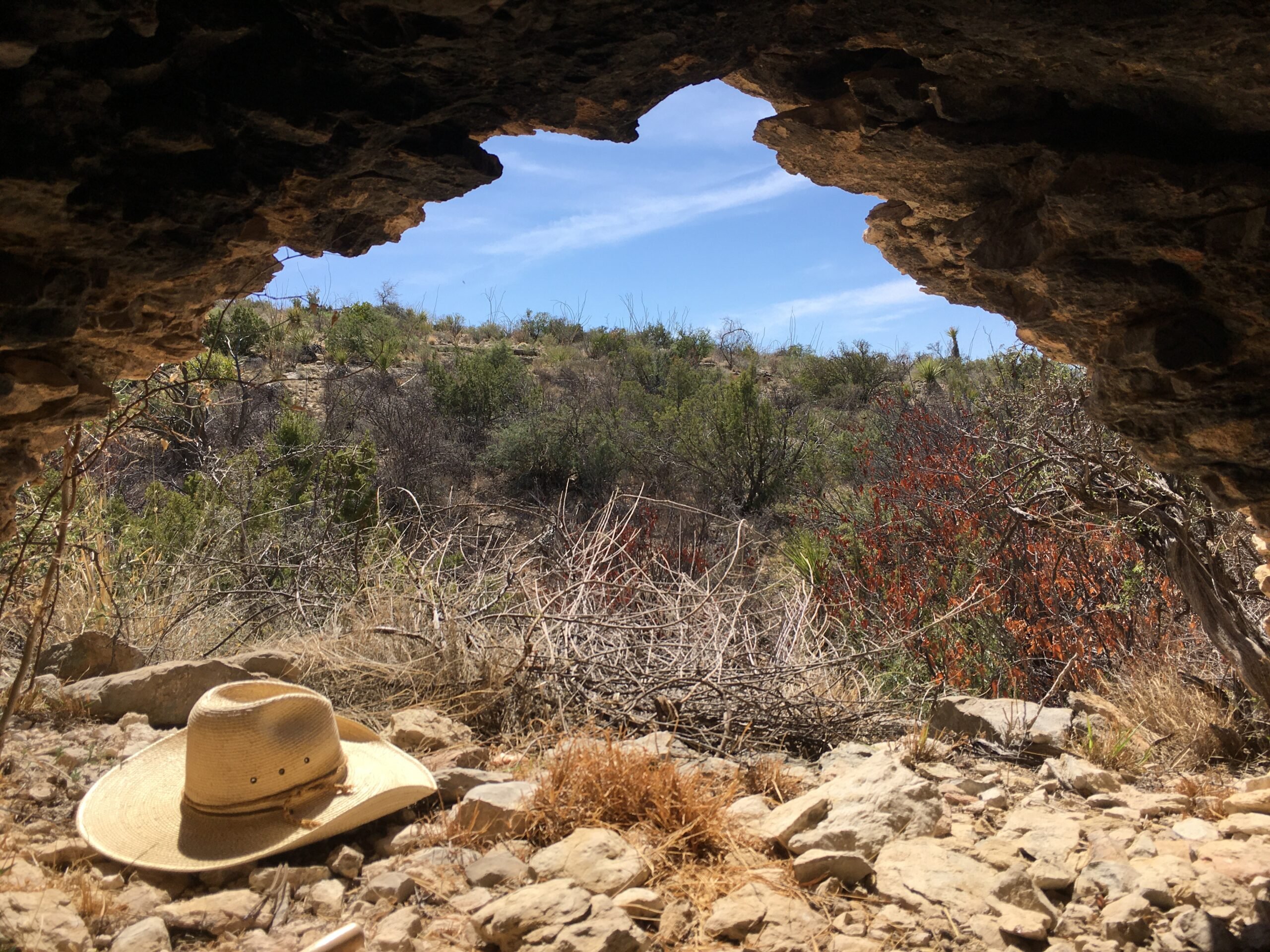 View from inside a rock shelter on Boot Ranch in Alpine. Senior Project Archeologist at the Center for Big Bend Studies David Keller discussed recent archaeological investigations he conducted on the property at the center’s 27th annual conference this past weekend at Sul Ross State University. Photo courtesy of David Keller.
Subscribe

ALPINE — Archaeologists, historians and inquiring minds gathered for the 27th annual Center for Big Bend Studies Conference at Sul Ross State University in Alpine this past weekend to share and discuss the culture of the Trans-Pecos region.

A series of diverse presentations spanned the two-day conference which was back in person this year after being canceled in 2020. Topics included preliminary archeological discoveries of the San Esteban rock shelter in Marfa, rock art styles in the Big Bend, a forthcoming collaborative book on the Mexican Revolution of 1910 and heritage preservation on private lands.

The number of attendees and talks were fewer than previous years, perhaps due to concerns over coronavirus, but many socialized with familiar faces and enthusiastically engaged with the material. There was no shortage of snacks and days were abbreviated by libations, including a lager crafted specifically for the event by Brick Vault Brewery and Barbecue.

“Every year the conference is really good. You catch up on the research that’s being done, you meet these folks that show up every year. It’s kind of like a big family reunion,” said Thomas Alex, one of this year’s speakers.

Alex served as the archaeologist and cultural resource manager at Big Bend National Park for 31 years and, while officially retired, still volunteers and conducts various projects around the area. He kicked off the conference by introducing his new project to preserve local histories by mapping graves in the Terlingua cemetery. A historical marker from the Texas Historical Commission recognizes the cemetery as the burial site of Federico Villalba, “the first Hispanic in the county to file a mining claim.”

After publishing a photographic history of Terlingua and working with others to tidy up Mina 248 or Camposanto del Arroyo cemetery, Alex was spurred to properly catalog the Terlingua cemetery this past January. Using aerial photography and Google Earth imagery, Alex created a detailed inventory of the Terlingua cemetery which allows users to click on specific interments to learn more about the grave style –– whether it is a wood cross or stone monument, for example –– as well as information about who was buried there, such as name, birth and death dates.

The cemetery measures 1.44 acres, and, according to Alex’s discoveries, contains a total of approximately 530 gravesites, of which only 98 have been identified.

“The problem is that a lot of the graves, the markers have been removed or vandalized. A lot of the old wooden crosses are real weathered and you just can’t read the inscriptions anymore, so you can’t tell who’s actually buried there,” said Alex.

Alex has published his findings and an interactive map on the website Familias De Terlingua, which features local genealogies, histories and photographs. His friend and collaborator Robert E. Wirt, who passed away in 2013, searched Brewster County death records during the active mining period from the 1890s to 1945, gathering the names and causes of death of those listed as buried in Terlingua Cemetery. That inventory is also available online.

The cemetery remains active and Alex will continue to update his inventory as more burials take place. It is vital to gain a broad swath of historic information before older generations pass on and it is lost forever, said Alex.

“Each person individually has a different perspective on that history, so it’s good to get several people’s impressions, ideas, concepts and stories, because it all blends into that huge spider web network of human history and how we understand where we live, what the history of this place is,” said Alex.

He said he is thankful for the conference and sees it as an opportunity to spread awareness of the historical significance of each other’s work.

“We’re capturing stuff now, whether it’s archeology or history, we’re able to share it or at least pin it down to a point in time. It’s like a snapshot of history. So we can come here to the conference and show our photograph, so to speak. Then it becomes part of the record,” said Alex.

Out on the mezzanine between talks, attendees chatted and browsed books on display by various vendors. Alfredo Gonzalez, owner of Chiricahua Book Company, has been attending the conference for 16 years and slinging books about the West. He sells some rare, out-of-print books as well as others more readily available. He tries to source material conference goers may not be able to find in their communities, noting their often sundry selections.

“I try to make a selection that covers not only Texas, but the entire Southwest and then also the Spanish and Mexican periods,” said Gonzalez. “We have already sold a bunch of stuff on the military, on ranching. I sold a gardening book, I’ve sold a book on Apaches, so the interests vary.”

This year’s event was the first time Dr. Bryon Schroeder, director of the Center for Big Bend Studies, hosted the conference in person. While the center had some concerns about getting enough participants to sign up, people turned out and seemed to be hungering for a sense of normalcy, said Schroeder. He said he’d like to see the conference continue to grow in both attendance and scope.

“We want to keep raising the bar and keep bringing people back together, but also start bringing in new ideas too. Because it’s fun to see everybody, but it’s also fun to get some new thinking in,” said Schroeder.

This year there were no presentations by representatives from Mexico, something the conference has previously incorporated. The center is two years into a five-year partnership with the Instituto Nacional de Antropología e Historia, a governmental bureau in Mexico that oversees archaeological sites and studies. Due to a mixture of issues including the pandemic, funding and changes on the governmental level in Mexico, their goal to establish a project has been delayed. Schroeder said he hopes to work with INAH to craft a specific project the two entities can collaborate on that would be mutually beneficial and could receive funding. With many world heritage sites on its roster, it can also be difficult to compete for resources with Mexico’s other priorities, Schroeder said.

“The problem, I think, especially for us — we’re interested in Northern Chihuahua — is that those resources are devoted to really cool stuff like the Mayan temples,” Schroeder laughs. “There’s not a whole lot of effort to see what hunter gatherers are doing in the northern reaches of the Chihuahuan Desert.”

Looking forward, Schroeder said he’s excited about the center’s upcoming projects. This spring they plan to conduct a survey on the impacts of river traffic on archaeological sites around the Rio Grande in Big Bend National Park. Due to the sheer size of the Big Bend Region, it can be difficult to keep tabs on all the ongoing research, but the intimate conference is a welcome reminder of people’s shared interest in history, Schroeder said.

“Especially now with everything that’s going on, all the technology and stuff. It’s just nice to know that there’s still people who are interested in the past and what the past informs us about the future,” said Schroeder.

Update: A previous version of this story stated the Center for Big Bend Studies conference took place virtually in 2020. The conference was actually canceled and did not occur at all, either online or in person.