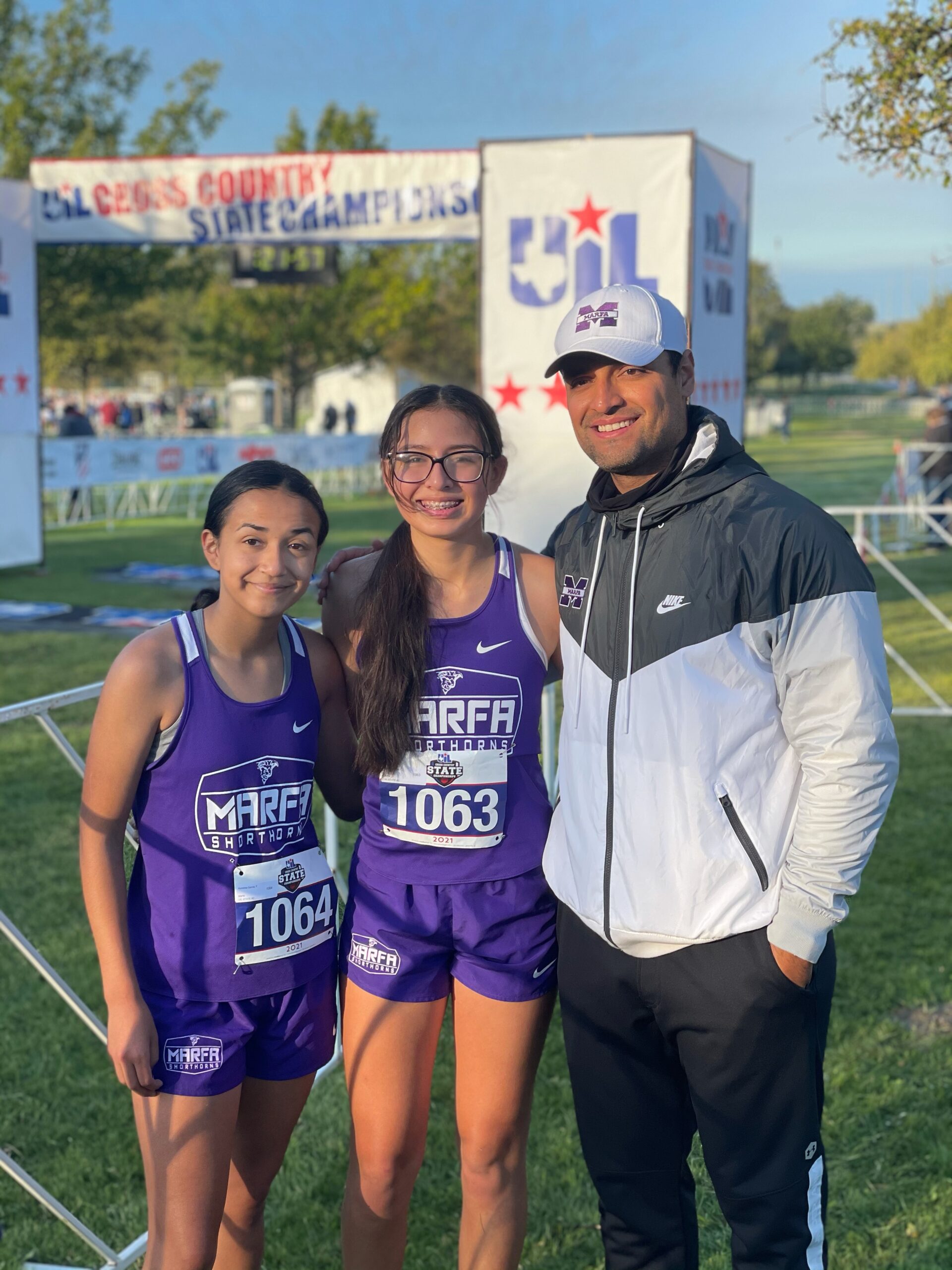 ROUND ROCK — On a brisk Friday morning last week, Marfa High School junior Ummi Chanez was entering the final stretch of the two-mile track at the UIL Cross-Country State Meet in Round Rock.

“There’s a lot of runners that finish the race off by sprinting, so I was just nervous that somebody was going to pass me at the very end,” Chanez said this week. “I was excited to finish so I just sprinted and gave it my all.”

As she glanced at the time clock at the end of the course, she realized she was about to hit her personal record. Just across the finish line, her mother Elizabeth Gutierrez, grandparents Arturo and Rosa Maria Gutierrez, Marfa Athletic Director Linda Ojeda and her head coach, Edgar Ramirez, were screaming and cheering on Chanez and her fellow Marfa runner Aundrea Garcia, who wasn’t far behind.

It was Chanez’s all that carried her to a 12:44.34 time and a fifth place finish among all Texas cross-country girls from 1A schools like Marfa High School. “It felt more real that I got fifth in state when I saw their faces and smiles like, wow, I did it. It warmed my heart.” Under a minute later, Garcia broke her personal best as well, placing 33rd in the state.

“When we saw Ummi coming in fifth, me and Coach Ojeda were crying,” said Ramirez, who said that other than the emotional finishes by Chanez and Garcia, the small Marfa team had come into the race with more confidence and calmness than previous years.

“I was calm, but what made me calm was them,” the coach said about the lead up to the race. “As a coach you’re always going to be nervous for your athletes, but they worked their butts off the whole year.” Ramirez, who grew up in Presidio, became the coach last year and took the same two competitors to state. In 2020, Chanez got 13th in state and Garcia got 58, showing the leaps each of them made in one year’s time under the instruction of Ramirez.

Coach Ramirez attributed the new attitude going into state to the fact that the girls had been there before and were more familiar with the course and the pressure that comes along with running in a massive pack of the state’s finest cross-country runners.

He also gave special recognition to a confidence and maturity that he said Chanez and Garcia have developed in their time with the Marfa High School cross-country program. The girls, along with their teammates, have learned to show up to practice on time without complaint, even when it was moved up to a 6 a.m. start time.

When Ramirez first introduced ice baths as a tool for muscle recovery, the girls balked at it, not wanting to endure the dunk into freezing temperatures. But eventually they warmed up to the process. Not only did it help with recovery post-runs, it also built up their mental stamina and perseverance skills. “Ice baths are tough, but it helped us get mentally tough, because these girls know when they get in, they don’t complain; they get in and get it over with,” Ramirez said.

“Through this year, honestly, something just changed,” Ramirez said. “Their maturity level and work ethic changed, and their whole commitment to the sport was amazing.”

The girls have also learned to balance a full plate of school and extracurriculars, including sports that run through the same season. Chanez and Garcia both play volleyball, and traveled straight from a Thursday game to get to Round Rock for the Friday morning race.

When they arrived, Coach Ramirez asked them how they were feeling, and they felt “good to go,” he said. When he asked again the morning of, they reconfirmed their preparedness. So when they were minutes away from starting the race, the coach said, “We knew what to do.” They warmed up, said a prayer and he imparted some final words of advice.

“I always tell them, don’t leave anything on the course; always run as fast as you can. Don’t leave anything there, because you don’t want the regret of, ‘Man I could’ve tried harder,’” he said, before adding, “Their calmness and maturity made me say, ‘We’re ready to go.’”

Their preparation paid off, and the girls were able to make Marfa proud. However, last week’s victory has only fueled the cross-country runners of Marfa to push even harder. In a team meeting this week, the girls and Coach Ramirez set their goals for next season. 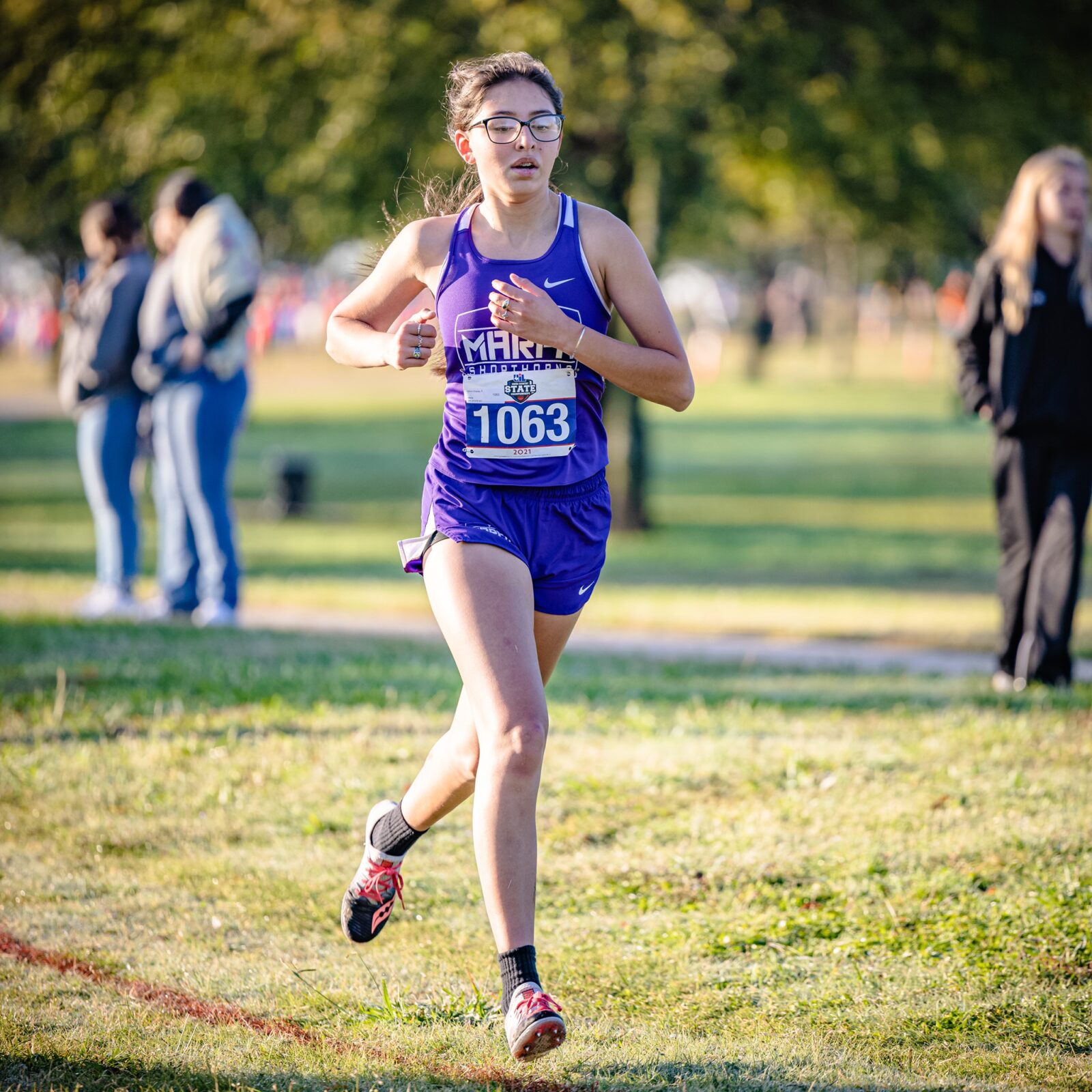 While only individual girls qualified for state this year, Ramirez hopes the girls’ successes will fire up the whole team to push themselves further. “I just felt like finishing top 5, it could motivate the girls to want it more and want that feeling more and to just know they can do it and that anything is possible,” said Chanez. “I’m so blessed to have made history in Marfa and I’m happy I got to represent Marfa at state.”

At regionals this year, Garcia was fifth overall in the region, only six seconds behind Chanez, “so you know she has a little bit more to give,” Ramirez said. He was confident that many of his current runners will be able to tap into their practice even harder and reach further than they did in 2021.

Along with Chanez and Garcia, the team has Emily Hernandez, Soraya Vallez, Lesly Torres, Liani Salcido and Kassandra Garcia. Made mostly of juniors, sophomores and freshmen, the team is “still sort of young,” the coach said, which means he’ll have more time to develop their skills.

He also foresees growth in the team’s numbers. “The first year I was here, cross-country wasn’t really a thing. These girls have made it a thing,” he said. “I have junior high girls that are interested and ready to run in cross-country; the girls have younger fans that want to be just like them.”

Speaking about Chanez’s fifth place finish, Ramirez said, “What it signifies for our program is she made history.” Though the school wasn’t able to provide information about cross-country records going back in the school’s history books, Chanez has at least reached an achievement in Marfa that hasn’t been seen in recent history. And as a junior this year, it means she still has another year to sharpen those skills and meet Texas’ best runners in one year’s time.

“These two girls are studs. They have set the example for the younger generation,” Ramirez said. “They’re slowly leaving a legacy, the whole team.”