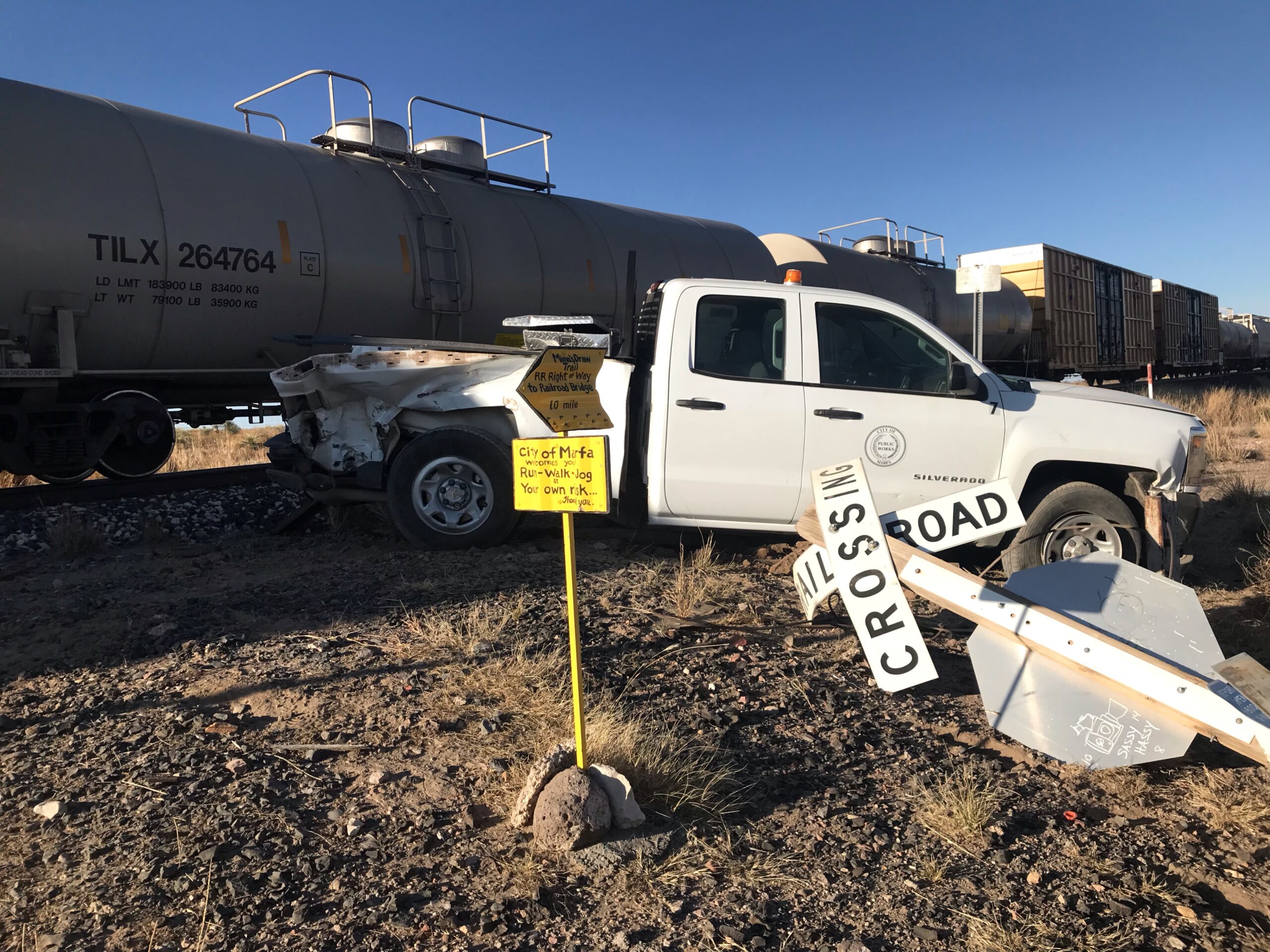 An accident Friday morning at the railroad crossing west of Marfa city limits resulted in damage to a city vehicle, but the passengers, Chuck Salgado and his young son, managed to escape the crash with minor injuries. Photo by Abbie Perrault.
Subscribe

MARFA — A freight train struck a vehicle at the railroad crossing west of Marfa city limits on Friday morning, injuring two. The vehicle driver, Marfa resident and city employee Chuck Salgado, now faces a charge for failing to yield right of way at railroad crossing, according to the Texas Department of Public Safety.

A little before 8 a.m., Salgado was on his way to drop off his nine year old son at Marfa Elementary School when they approached the railroad intersection at West Washington Street, north of the cemeteries. Salgado recounted, “Sun glare did contribute to us crossing. I looked both ways and couldn’t see anything through the sun. I also never heard a train horn, not once.”

Alfredo Chavez saw it all unfold from his car on the north side of the tracks. Chavez, an assistant manager at Porter’s, had been driving on the dirt road railroad easement that runs parallel to the tracks when his wife in the passenger seat warned him to watch out for the oncoming train. He looked in his driver’s side mirror, saw the headlights of the train, came to a stop and watched as Salgado began crossing the tracks.

Salgado, driving a 2019 white Chevrolet Silverado marked “City of Marfa Public Works,” made it halfway across the tracks before the freight train slammed into the right side of the truck bed, spinning the driver and his son in a full circle and pushing them through a railroad crossing sign before they came to a stop.

“Thank goodness that he passed across the tracks enough that it got him in the tail,” Chavez said in the aftermath of the event.

Chavez and his wife called 911 multiple times until their phones connected and exited their vehicle to render aid, but Salgado and his son were already climbing out of the truck.

“We were able to go ahead and let them sit in our vehicle until the cops and everybody else showed up,” Chavez explained. “Our vehicle became somewhat of a little safe haven, if you will, because they were both in shock.”

Salgado reported chest pains and his son showed an abrasion under right eyebrow and a bruised shoulder. Both were transferred to Big Bend Regional Medical Center in Alpine and released, but Salgado went to University Medical Center of El Paso later in the afternoon after having trouble breathing, he said. He was released that night, and on Monday said, “We’re both recovering well and resting.”

Union Pacific senior manager of communications Mike Jaixen confirmed that the train crew was not injured.

Through the rest of the morning and afternoon, the train remained exactly where it had come to a stop after the accident. The locomotive was blocking Mesa Street railroad crossing and caused other trains that routinely pass through the area to be delayed, where they remained parked along the railways east and west of the accident, before finally clearing in the evening.

The West Washington intersection, which does not have a crossing gate with arms, has been the site of two accidents between vehicles and trains in the past two years. Last year, a teenager with a learner’s permit drove a white Maserati onto the tracks at the intersection and an oncoming train crushed the front of the vehicle, but left the three vehicle occupants unscathed.

The intersection lies just west of Marfa’s city limits, leaving its configuration up to the responsibility of Presidio County. “The decision about the type of warning device belongs to the road authority (state, county or city, depending on who is responsible for the road), not Union Pacific,” Jaixen said. “Installation and maintenance of the warning device is the responsibility of the railroad.”

“All I know is I’m glad that the people that were involved were okay, including the person in the train, considering it could have been worse,” said Chavez, the witness. “Thank God that the driver of that vehicle and the child are okay.”

After surviving the harrowing event, Salgado said this week, “We are recovering and will be especially thankful this Thanksgiving.”

train accident
Stay in touch with The Sentinel
Related