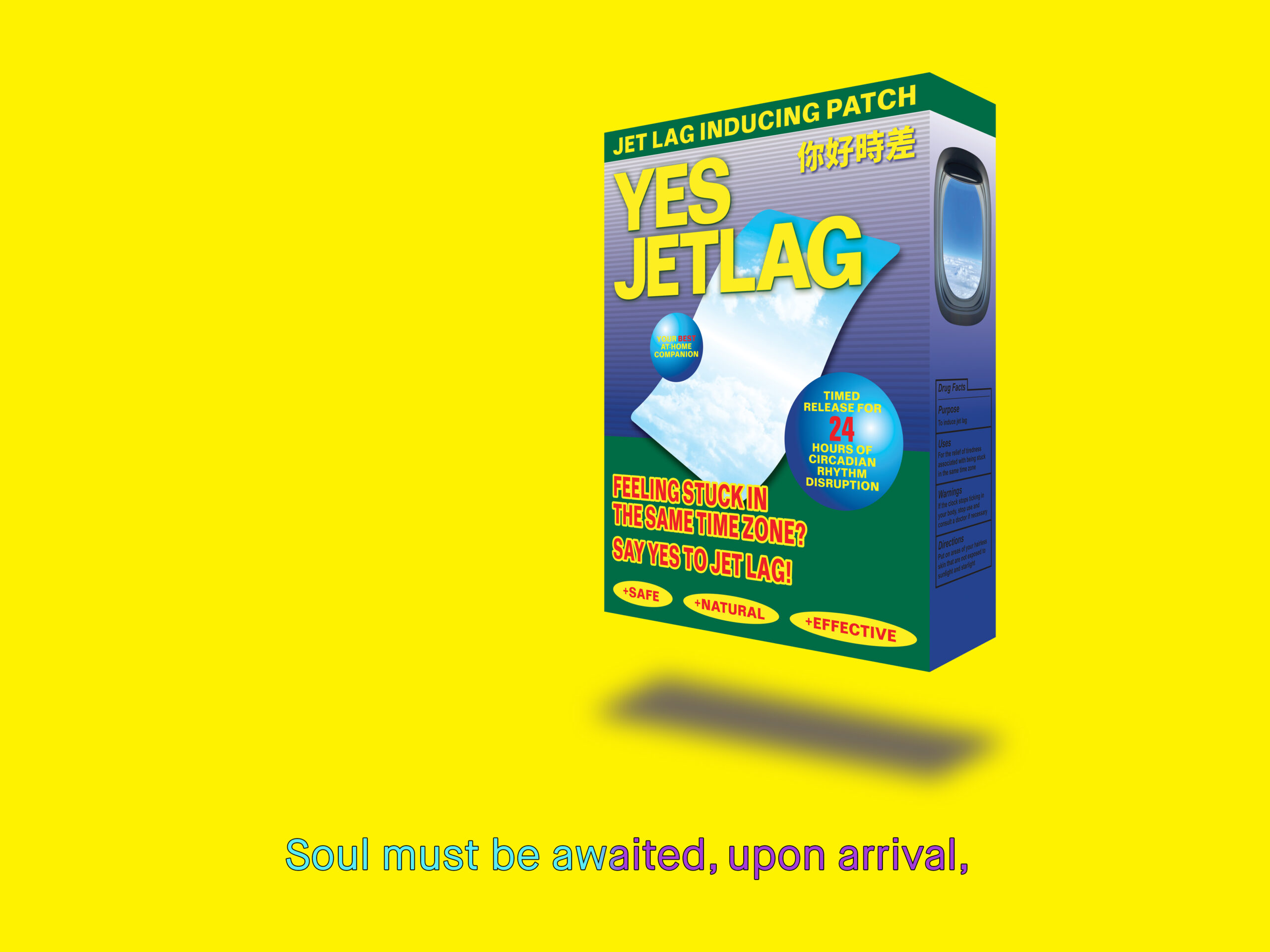 Wong comes to Marfa from Hong Kong, China, to take part in the two-month artist residency at The Chinati Foundation. She is drawn to far flung places and previously participated in The Arctic Circle, a program that brings together scientists, architects and artists to research the high-Arctic Svalbard Archipelago and Arctic Ocean. She studied painting as an undergraduate and went on to receive a masters in sculpture from Yale University. She has exhibited her work around the U.S., including New York where she lived for many years, and the world.

Wong began Yes-Jet-Lag / 你好時差 (formula 2.0) by passing out faux pharmaceutical jet lag inducing patches. The concept is a commentary on border crossing and time, born out of the isolation of the coronavirus pandemic, where theoretical travelers crave the fatigue resulting from border and time zone hopping. Painfully timely, when returning to Hong Kong from the U.S., Wong will have to quarantine in a hotel room for 21 days. Wong has previously considered the idea of clouds transgressing borders, making Far West Texas particularly well-suited to her research.

The artist put together a mood board of sorts to represent her current thinking on vaccinations, skin, marks and scarification. She incorporated historical references to European witchcraft and flying ointment in her performance.

Wong works in a time-based medium referred to as performance lectures, educational explorations in video, music and language, weaved together in a synchronous manner that both informs and mystifies the viewer. Common themes in her performance lectures are a karaoke style format to the subtitles and presence of her alter ego Ali, Wong’s English given name.

The artist previously studied traditional Chinese brush painting, which, like video, she also considers a time-based medium. She said her signature performance lecture format allows her to pack many complicated ideas into a singular work of art.

“Time is very magical when you can manipulate it,” Wong said. “You can expand time, you can compress time.”

“You could never put that in a painting or a sculpture. It really needed to unfold over time,” said Shaffner of Wong’s performance lecture approach. “It’s very concrete, then very abstract, and poetic too.”

Reflecting on her private guided tour of the Chinati collection, Wong said she found Judd’s work exemplified in the high desert setting of Marfa.

“Walking through the aluminum boxes, it was interesting to see the surface that captures the light or the weather or the sky, but also how the placement of the objects make me dance around the space,” Wong said.

The artist ran down a punch list of topics she’d like to dive into while in Far West Texas, and Chinati staff brainstormed on how to get her connected. In addition to an interest in the McDonald Observatory and the history of prisoners of war at Fort D.A. Russell, Wong hopes to learn more about Norteño music (staff suggested she sit in on Dos Horas con Primo on Marfa Public Radio hosted by Primo Carrasco and Tim Johnson) and witness the Marfa Lights. Chinati Foundation Director Jenny Moore promised to fulfill Wong’s wishes of going horseback riding while she’s in the Big Bend.

Founded in 1989, the Chinati artists in residence program gifts participants with a $1,500 stipend, a stay on Chinati grounds and access to a studio in downtown Marfa. Artists are ultimately not required to produce anything in particular, but some opt to host an open studio.

Shaffner was eager to have Wong join the roster of Chinati artists in residence because of her pull toward remote areas of the earth and interdisciplinary practice.

“I’m interested in how artists who come here, what being here will bring to the narrative of their own work, coming here and moving out. And a perspective from Asia, to be thinking about borders and boundaries, the politics of Hong Kong right now, opening up our world too,” said Shaffner.

The next generation of artists in residence for 2022 were recently announced as Jesus Benavente, Mike Crane, Sarah Crowner, Dionne Lee and David Watson. There were a record number of 600 applicants for the 2022 iteration of the program, which Schaffner hypothesized could have been a result of increased exposure due to the Judd exhibition at the Museum of Modern Art in New York, which was on view from March 2020 to January 2021.

Chinati artists in residence
Stay in touch with The Sentinel
Related