B.J. Bishop Wetlands invites birds, birders and locals to visit, and in the future, maybe even golfers

Terry Bishop surveys the B.J. Bishop Wetlands, a property east of Presidio where a wetland hosts a wide variety of birds and a walking path for locals and birders alike to enjoy. Bishop hopes to revive the golf course on the property, which has been out of commission since the floods of September 2008. Photo by Hannah Gentiles.
Subscribe

PRESIDIO — Terry Bishop isn’t a birder, a wetland expert or much of a golfer, but these days he’s busy managing a piece of land that has him wearing many hats. At a property on the east side of Presidio, just across the road from the Loma Paloma RV park that he runs, sits an artificial wetland, a golf course and a tree nursery that are all under the care of Bishop.

Bishop has been with this particular plot of land since its days of being farmed in the 1970s, ’80s and ’90s — and when the labor and profit margins for that work dried up. His family has owned this particular piece of property since 1978. “We had onions, cantaloupe. At one time we were leasing land all up and down here, in addition to what we owned,” Bishop said. “Then when vegetable farming went out, we didn’t need that anymore, so we let it go.”

He was also there alongside his father, B.J. Bishop, when they transformed it into a golf course — and when a historic flood later washed it out and closed its doors in September 2008. This particular plot was out of the way from the family’s other farms and as agriculture in Presidio dwindled, Bishop’s father took the fallow land and turned it into an 18 hole golf course to rival the Lajitas links, which at the time was under newer, stricter management that kept out some of the area golfers.

And Bishop was there when the City of Presidio eventually came knocking, with an idea to funnel its treated wastewater through the lot, under the levy and into the river, telling Bishop he could use any of that treated water as it passed through the land — and when, in 2015, he and a group of locals and environmentalists (the now disbanded Trans Pecos Water and Land Trust) made a somewhat radical choice to use that treated wastewater to create a critical wetland environment that had otherwise become all too scarce in the region.

Six years on, the wetland is getting its footing established, and the land has morphed once again, becoming a popular birding spot, a nursery for growing vital native trees and even a place to restore part of the golf course for the Presidio community to enjoy once again.

On Monday morning, Bishop was out at the wetlands, looking at how much water has filled into the shallow carve outs that he made with a crew in 2014 and 2015 as they executed the wetland blueprints with the help of grant funds from the North American Wetlands Conservation Act.

Since the wetlands opened in 2015, Bishop has been battling the aquatic plants that thrive in the shallow waters, culling the overgrowth back in order to keep space open for birds to wade around, drink, and eat bugs and seeds. The water’s depth goes from a foot and a half at its deepest down to just an inch, catering to different types of birds. There’s also an island in the middle, for birds that want to nest.

“I didn’t know anything about wetlands,” Bishop said of the early days. “I get involved in a lot of things I don’t know about.” Since then, he’s spent time testing out ways to manage the new wetland.

“Controlling the vegetation is one of the hardest parts about it. It’s not something I’ve done, it’s just something I’m doing. It’s a learning process. I’ve been trying to find the best way to control it — it’s difficult,” Bishop said.

“Vegetation management is the biggest challenge that I’ve seen,” said Jeff Bennett, a conservation delivery specialist who works for the American Bird Conservancy and the Rio Grande Joint Venture, a public/private partnership of governments and NGOs on both sides of the border focused on bird habitat. “Aquatic plants can take over and then the open water is lost.”

Bishop drained and dried parts of the wetland earlier this year and removed a good amount of the vegetation that had begun to take over much of the open water. “I’ve burned it up, chopped it up, cut it up. I think I kind of like what we did this year, but I’ll wait to see how the birds and everyone else likes it.” He’s still fine tuning the balances of vegetation and water levels that keep the big and small birds happy.

Initially, Bishop had also tried to keep the birders at bay by setting up a viewing spot along the highway for the bird enthusiasts to watch from and posting a ‘no trespassing’ sign to keep them from actually entering the property.

Bishop watched the land, he said, and “birders with some of the fanciest cameras I’ve ever seen” began arriving. The Texas Department of Transportation was planning to build a turnoff for the viewing area, but it never came to fruition. Ultimately, it didn’t matter — the bird watchers couldn’t stand being at such a distance, so eventually they went right past the posted sign.

“Then I discovered that birders are generally some of the best people you can have around,” Bishop said. “They’re clean, they take care of stuff. So I just picked up the ‘no trespassing’ sign, threw it away and said, ‘Come on in.’ It’s open for whoever wants to come.” 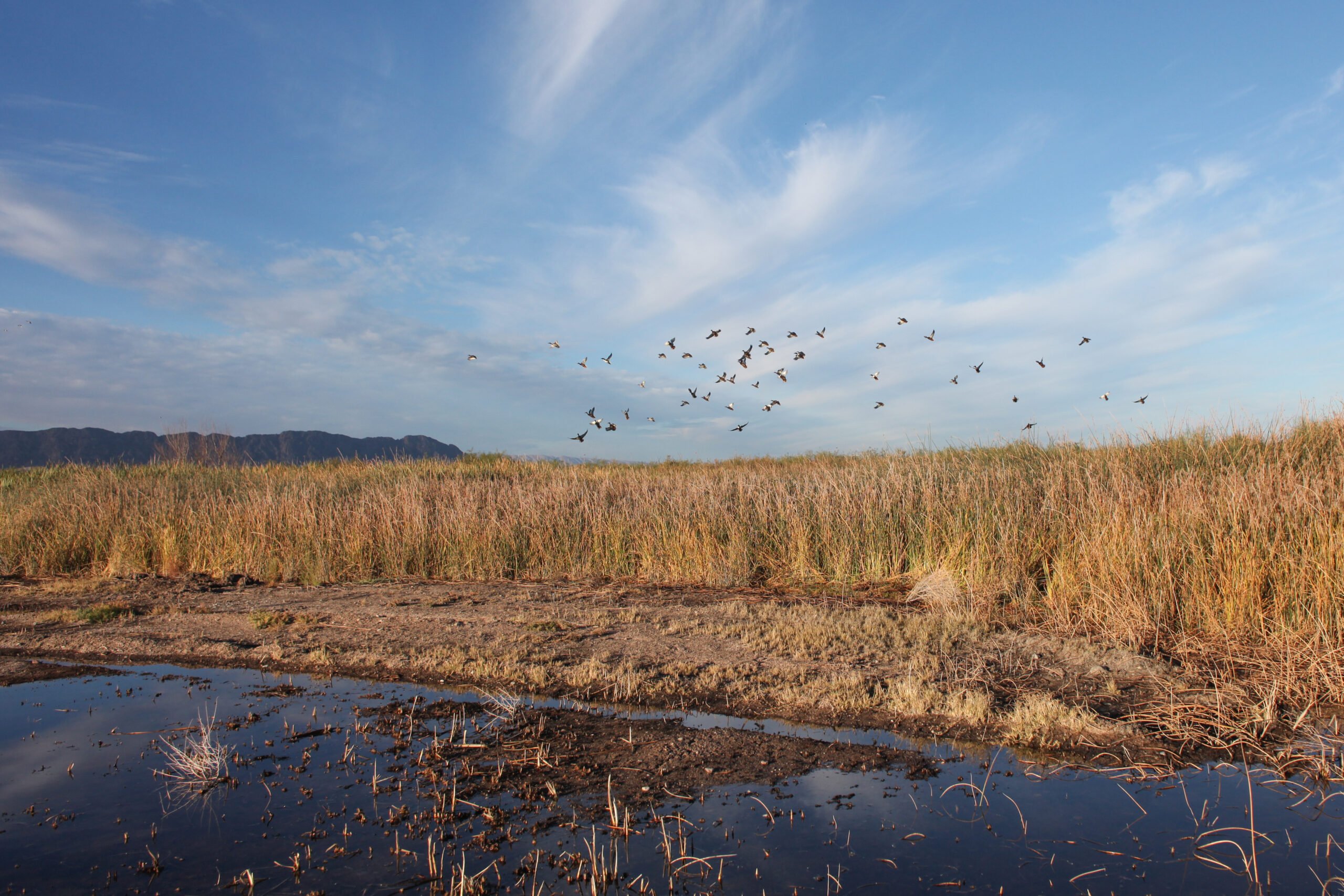 Caption: Ducks fly in and out of the B.J. Bishop Wetlands, a crucial outpost for native and migrant birds in Presidio. Photo by Hannah Gentiles.

Even those without a deep knowledge of birds can enjoy the walking path that encircles the wetland, the songbirds trilling from the brush and the mountain views. Turtles, mule deer, lizards and frogs also have made their home in the area and can sometimes be spotted by those who go looking.

Bennett identified some of the birds making use of the wetlands, such as ducks, grebes, geese, waterfowl, warblers, vireos, buntings and all sorts of song birds. A Virginia Rail was spotted recently, and last year Bennett spotted a White-Faced Ibis.

A study released last year indicated that since 1970, nearly 3 billion North American birds have died out. The crisis has highlighted the need for safe environments for birds to seek refuge or live in, and wetlands like Bishop’s are “replacements for habitats that’ve been lost,” Bennett explained. “There used to be wetlands around the Rio Grande and the Rio Grande has been drying up, so these mitigate some of those losses and are important stopovers for migratory birds.”

Bennett has also spent time at the wetlands recently, checking in on a years-long project he’s managing there. A joint venture between the Texas Parks and Wildlife Department, the National Parks Service, Dixon Water Foundation and some Mexican agencies has begun raising native cottonwoods and desert willows next to the wetlands. The group will take cuttings from the tree nursery there and plant them along streams and the river in both the parks and private land, in order to restore habitats in the region. It’s one of the many uses the 12 acre plot hosts now.

Bishop does his best to help explain that treated wastewater is completely safe to be around. Still, regulations require him to put an electric fence around the body of water itself, even as it’s been openly released into the Rio Grande just yards away.

“How do you convince people that you can take water from a treatment plant and make use of it?” Bennett asked rhetorically. “Twenty years ago people laughed when you said that stuff. That is changing. El Paso has a reuse project. Reusing wastewater, people are starting to realize that it’s valuable and we shouldn’t just put it in a pond and let it evaporate. We should find a way to make use of it.”

Birders in the Big Bend region aren’t so easily deterred. On popular birdwatching apps, birders have been recording bird sightings at Study Butte and Candelaria wastewater treatment plants; they are seemingly unbothered by the origins of the water, but instead glad to have another waystation for migratory and native birds to stop into and be seen.

The property is also looking to welcome back golfers. After the flood in 2008 left water on the greens for 63 straight days, killing the trees and grasses Bishop struggled to find time to renovate and restore the course that’s on site near the wetlands.

The city and residents all wanted the course to return, so local golfers could play, and the school hoped the course would make a return so students could train for the sport, Bishop said.

“The locals were tired of driving to Lajitas or Alpine or Marfa to play golf, so I said, ‘Well then help me.’ So we’re putting it in — just people volunteering and a nonprofit called Presidio Amateur Golf Association,” Bishop said. “I’m not saying it’s going to be open like a business, we’re just doing it, a bunch of friends, because we’ve got time and money to do it. We’re going to put in a 9 hole that will play 18. It should be ready next year.”

Talking about the property, Bishop summed up his feelings. “I didn’t know which end of a club to hold and still really don’t. And I could tell you what a buzzard or quail or dove look like, but I don’t know all the others. But there’s some really cool looking birds, and everybody else seems to really get a kick out of it.”

“There’s no doors, there’s no charge,” Bishop said. “Just come and check it out.”