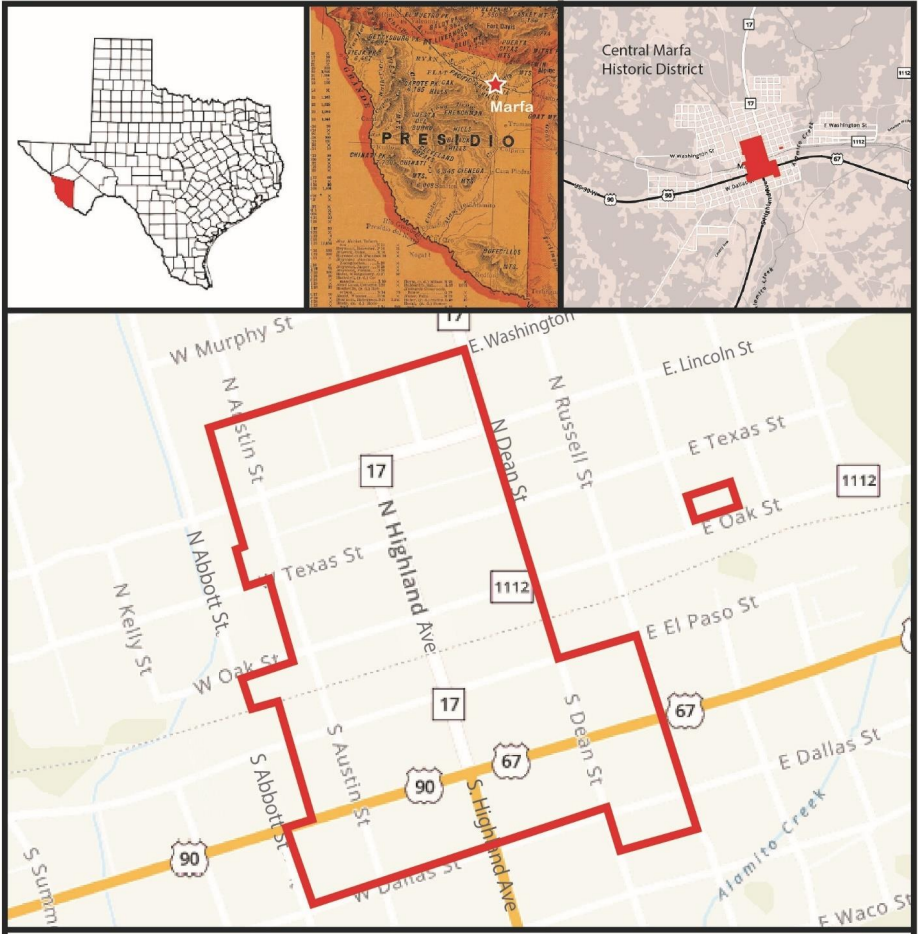 Map courtesy of the Texas Historical Commission. A map of the proposed Central Marfa Historic District, which may be placed on the National Register of Historic Places.
Subscribe

MARFA — A long-running plan to create a historic district in the center of Marfa for the National Register of Historic Places is moving one step closer to being realized. On Thursday, December 16, business owners, Marfa residents and those curious to know more about the process are invited to attend a meeting with the Texas Historical Commission (THC).

The public information meeting, held next Thursday, December 16, at the Presidio County Courthouse at 5:30 p.m., will discuss the nomination process, the boundaries of the Central Marfa Historic District, and how it impacts property owners within the district.

The proposed district centers around Highland Avenue south of the courthouse, but its boundaries are roughly defined by Washington Street to the north, Dallas Street to the south, Dean and Russell to the east, and Austin and Abbot streets to the west.

“It’s an irregular boundary,” Greg Smith, a federal programs coordinator at THC, explained. “We draw them to include the highest concentration of contributing properties. One of the tricky things here is that we’re focusing on the commercial district, and in Marfa, there’s not a 100 percent clear distinction between commercial and residential.”

“Contributing properties” are usually ones that fall within a 50-year period of significance and have retained a good degree of integrity. “In this case, we’re extending that period into the 1990s, with the second period just to account for Donald Judd, his work and his influence,” Smith said.

The effort to recognize a historic central district in Marfa began as far back as the mid-2000s when the City of Marfa began looking into being on the register. With discussions underway, Judd Foundation was interested in having many of Judd’s properties in town recognized on the register, having a historic research survey carried out that identified resources and priorities for the district.

Since Judd’s properties are scattered throughout town, Smith said the project was reframed to include both the Judd properties and a broader scope of Marfa as a whole. “We already know that this area is eligible for listing — just as Marfa’s main street — so my recommendation was, ‘Why not include them [the Judd properties] in a larger district?’ That way, we could kill two birds with one stone.”

The proposed district up for consideration covers Marfa’s downtown strip, as well as reaching to incorporate many Judd properties.

The Judd Foundation and Chinati Foundation have supported the project through much of the process, saying in a joint statement that they “are proud to support the Texas Historical Commission’s efforts to nominate the Central Marfa Historic District to the National Register of Historic Places. Initiated by the City of Marfa in 2006, the nomination of the Central Marfa Historic District ensures the preservation of our city’s rich history.”

“Our organizations supported the research and development of the nomination as related to Donald Judd and our spaces, building on the current historic designations for Fort D.A. Russell, which includes much of Chinati Foundation, as well as Judd’s home and studio, the Block,” the statement continued.

Marfa’s Fort D.A. Russell, which is already on the National Register, might also be revisited sometime in the future. When it was added over 15 years ago, Judd’s work at the site was too recent to be widely considered as historical.

“Fort D.A. Russell was listed more or less despite Judd, so now, especially once this one goes through, it will be primed to go back and look at D.A. Russell and start evaluating it for its military history but also for its association with Judd,” Smith said.

While listing a property in the National Register of Historic Places indicates that a place is a historic property worthy of preservation, it is an honorific title and doesn’t mean there are any binding rules put on any of the properties that fall within its boundaries.

“We have these meetings to be clear that everybody understands that, first and foremost, listing in the National Register will have no adverse impact on anyone’s private property rights,” Smith said.

The idea is to retain the historic appearance of buildings, structures and landscapes, but the National Register does not carry any restrictions, nor does it require property owners to do anything with their properties, Smith said, even noting they could be demolished. “The idea is to have them recognized so at least some consideration can be made to the historic significance of these properties, so hopefully good decisions can be made with consideration to these properties.”

Still, should a majority of the private property owners within the district object to the nomination, the district won’t be listed on the register.

Instead of restrictions, a place on the register opens up additional opportunities for properties that are inside the district. “One of the major benefits of being on the National Historic Register is federal and state tax credits for rehabilitation,” said Smith. “Anybody who owns a building within the district who wants to use it for a commercial purpose, they can qualify for federal and state tax credits when they rehabilitate the building, as long as it meets the rehabilitation standards. It also applies to nonprofits.”

That’s an especially important point for the Central Marfa Historic District, which was designed to incorporate properties owned by Judd Foundation, the nonprofit art institution. However, if the district is approved, private property owners will also be able to apply for grant opportunities that have so far been out of reach. Federal and state tax credit details can be found at: www.thc.texas.gov/taxcredits.

The State Board of Review will meet early next year on January 15 to consider a variety of applications, including the one for Marfa’s historic district. A full copy of the draft nomination will be available on http://www.thc.texas.gov/sbrmeeting ahead of the meeting.