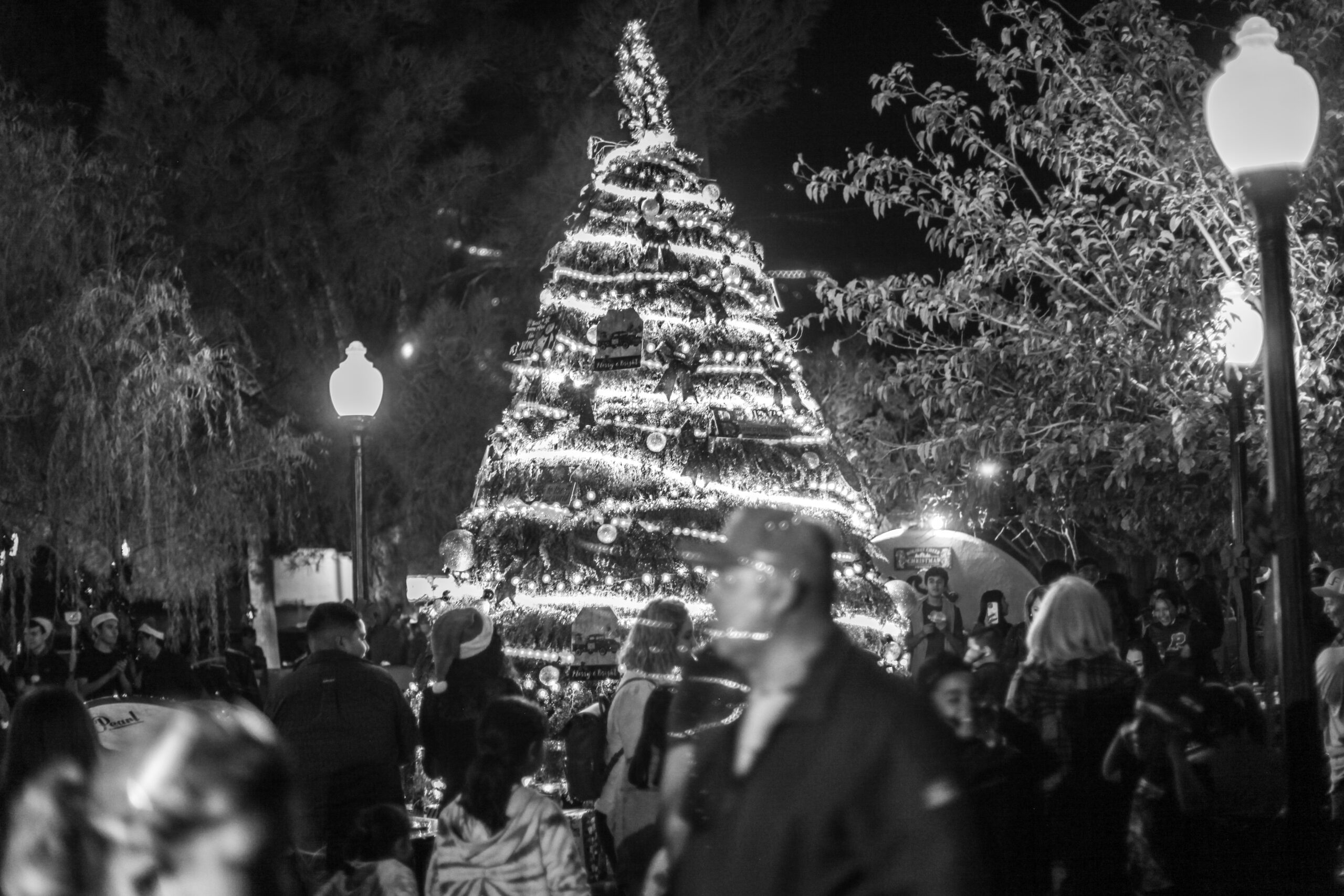 On Friday evening, Presidio community members gathered around the freshly lit Christmas tree at the St. Francis Plaza, closing out the night’s festive events. Photo by Hannah Gentiles for The Presidio International.
Subscribe

PRESIDIO — Last Friday night, Presidio residents lined the street in anticipation of the Presidio Posada, kicking off the holiday season in high style. Lights were hung up and down O’Reilly Street and families huddled on the tailgates of their trucks to take in the festivities.

“It was Presidio style — chaotic, but fun,” said Arian Velasquez-Ornelas, who organized the event through her role as president of the tourism board. She’s been organizing city events since the early 2000s, when she served as director of the Chamber of Commerce. Locals had been telling her throughout the pandemic that they missed the big events that the city used to throw. This year, she knew she had to make up for all the pandemic shut downs with a big party.

“Everybody was really excited that we were able to do something like this again, with the band from the school and the floats and the choir,” she said. “The best part was just being able to see everyone smiling.” 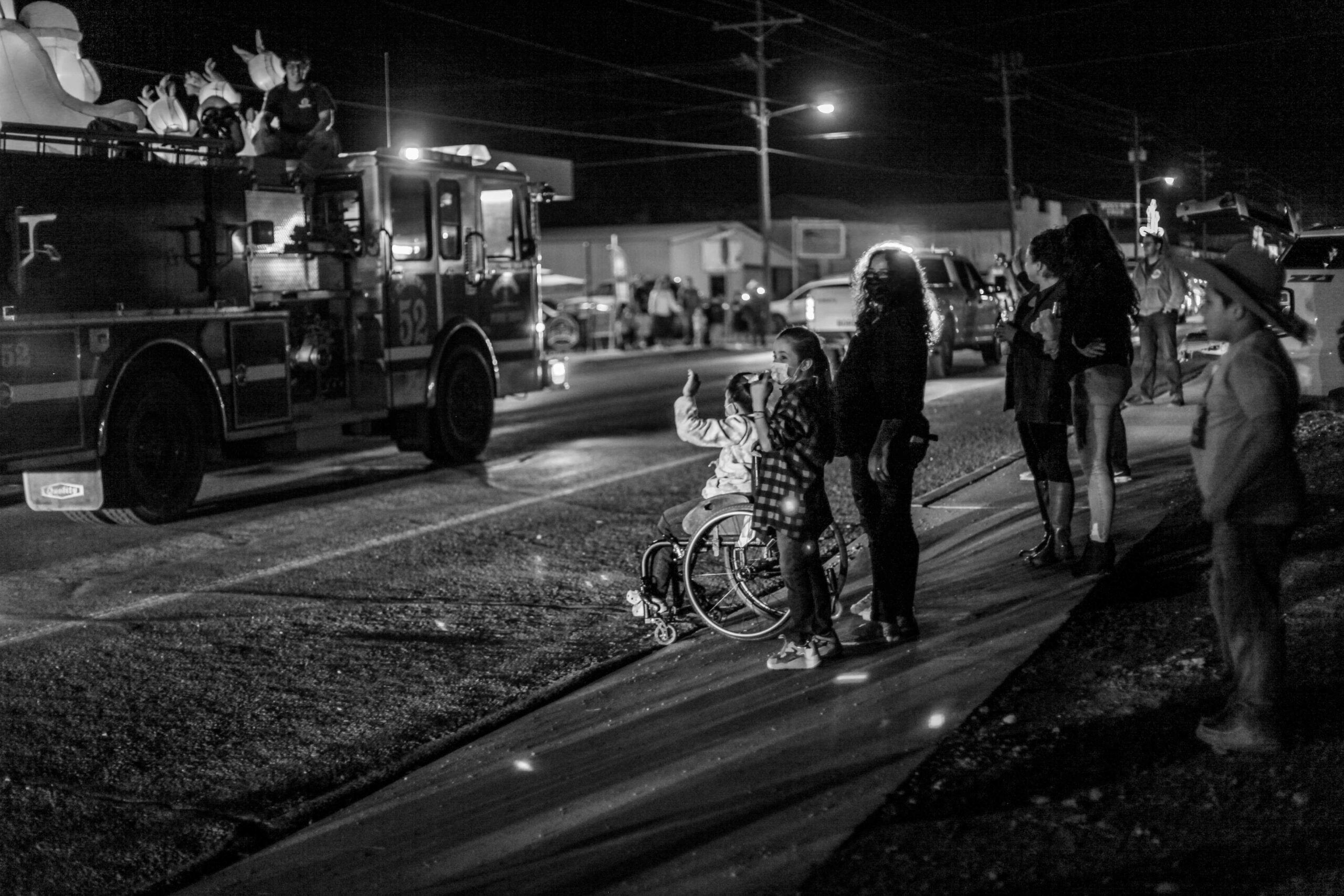 A highlight of any parade in Presidio, including this one, is an appearance by the Classic Car Club, an informal alliance of local folks with vintage wheels. “We have a lot of classic cars here in Presidio,” Velasquez-Ornelas explained. “This year they decided to put [Christmas] lights on their vehicles.”

Most of the unofficial members of the Classic Car Club are business owners from around town, with representatives from Rohana Auto Service, First Presidio Bank, Pancho’s Pizza and many more. Local businesses of all stripes as well as the Presidio Municipal Development District donated time, money and goodies to the cause. “The city employees also did a lot, man,” Velasquez-Ornelas said. “I want to thank everyone who worked really hard on this event.”

This was the fourth year in a row Presidio has rigged up a Christmas tree made of creosote for the official city tree lighting ceremony. It’s a tradition that comes from the Mexican side of the Big Bend, where pine trees are few but guame, or greasewood, is plentiful. It was chosen over other local woody bushes for practical reasons. Mesquite, though its branches are a bit more rugged, is treacherously spiky.

The creosote tree is made by lashing individual branches to a wooden frame and then decorating it like a typical pine Christmas tree. The new tradition means that Presidio has developed its own signature Christmas smell. “When it rains in Presidio, that’s the first thing you smell, the guame,” Velasquez-Ornelas explained. “When you smell our tree, it doesn’t smell like pine — it smells like rain.” 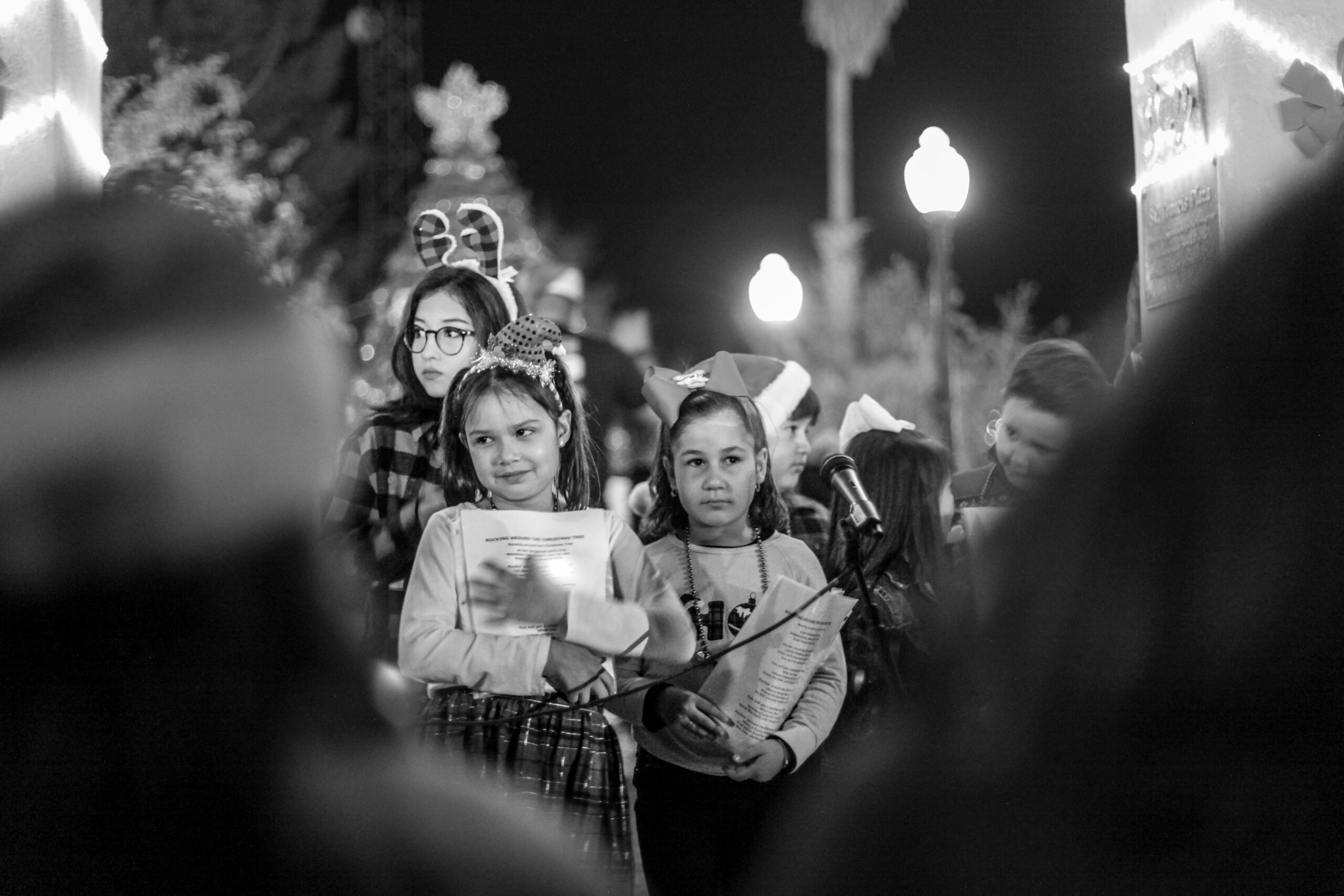 Nereida Marquez led the children’s choir, one of the highlights of Friday night’s festivities. The C.O.O.L. Kids, short for “Christ our only Lord,” performed at Santa Teresa Catholic Church last year as a way to spread holiday cheer when services were few and far between during the pandemic.

The kids have been hard at work for weeks learning their Christmas program. They started off their performance with a few church classics, but wrapped up with secular hits, including the group’s favorite, “Rockin’ Around the Christmas Tree.”

Most of the C.O.O.L. Kids are in their second year of First Communion class at Santa Teresa, but they range in age from four to 12. Marquez’s four-year-old son is the youngest participant — so young he can’t read the group’s lyrics, but instead memorizes the music by coming to practice. “He’s always like, ‘Mom, you didn’t get sheets for me!’ I tell him ‘Christopher, you don’t know how to read yet, hold on!’ But he’s always there, he sings the chorus lines, he remembers them all.”

Though the group is based at the Catholic church, it’s open to anybody who wants to participate. In less-busy weeks, they try to get together a few times a week, but lately they’ve been lucky to coordinate twice-a-week practice. Still, for Marquez and the rest of the C.O.O.L. Kids crew, it’s a labor of love. “It’s really joyful because they’re so young,” she said. “Whatever you teach them, they just soak it in. They don’t hold back. It’s beautiful.”

As part of the tree-lighting ceremony and Santa meet-and-greet, every young Presidio resident was invited to pick out gifts. Funding came in part from private donations and from the Dollar Tree, whose program to round up purchases contributed to the 350 Christmas gifts distributed at the event. “As long as you involve the children of Presidio, people will come out,” Velasquez-Ornelas attested.

“The whole production went off without a hitch,” said City Administrator Brad Newton. “What I really liked about it is we kicked off the Christmas season in Presidio early, on the 3rd. So everybody’s in the spirit, the decorations are up. We’re already saying ‘Merry Christmas’ around here.”