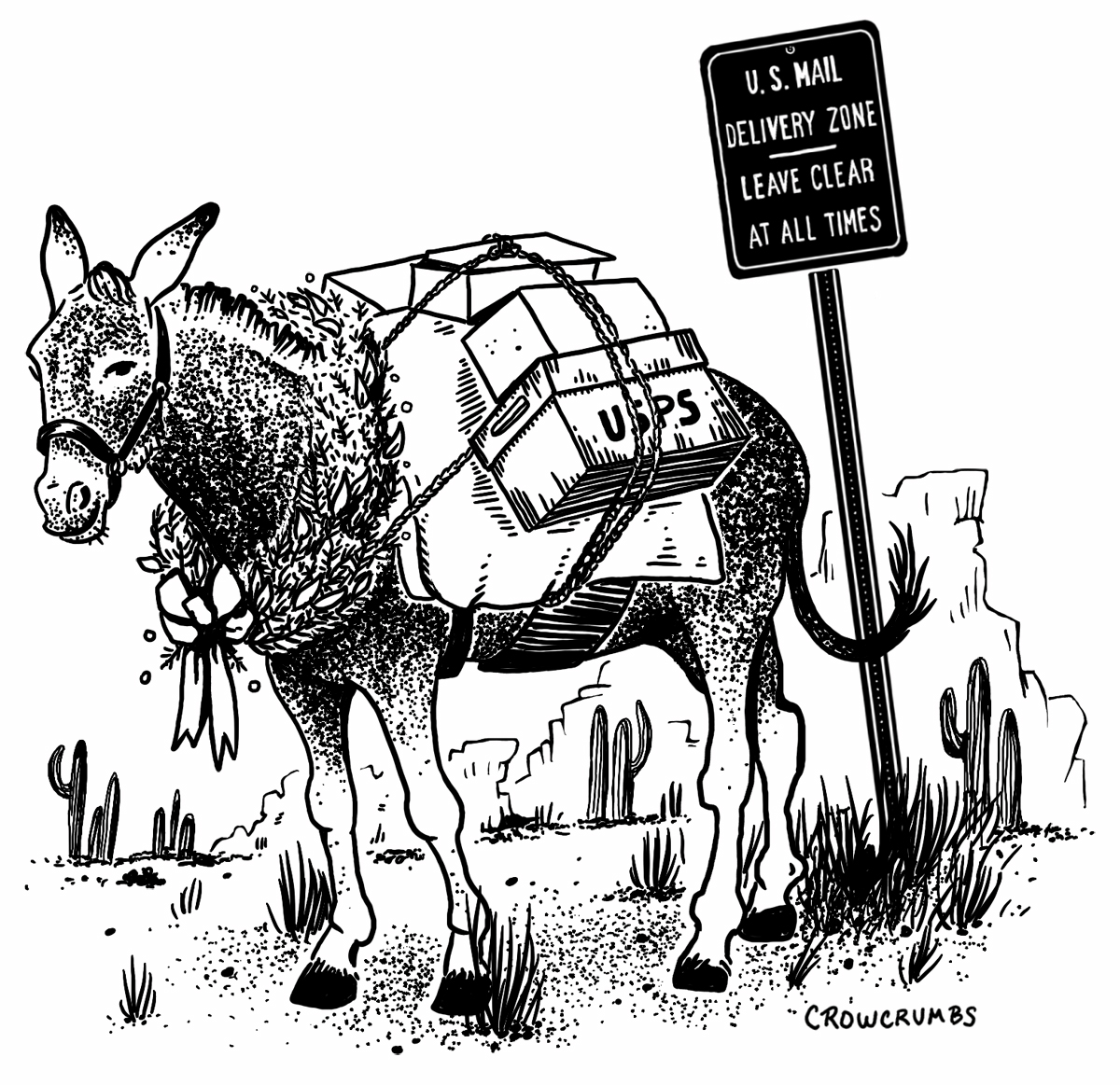 Where would Christmas be without the valiant workers of the United States Postal Service? Last year it was determined that 38% of the holiday mail was not delivered on time. The postal delay was not caused by the valiant workers but by an evil Grinch. The Grinch is named Louis DeJoy, the so-called postmaster general. He began his reckless plight to destroy the reputation for efficiency the USPS has earned since it was founded as the United States Post Office in 1775 by Ben Franklin and the original Continental Congress.

DeJoy’s rampage began when he scrapped 750 high-speed mail sorters in 2020 in a vain attempt to slow down mail-in voter ballots. He continued his relentless drive for inefficiency by cutting back overtime for mail deliverers into the Christmas season. But let us dwell not on the horrors of DeJoy and concentrate on the more interesting aspects of what is still considered one of the most efficient postal systems in the world.

Did you know that 600 residents at the bottom of the Grand Canyon are served by mail deliverers who are mules? The Supai Post Office, which serves the people of the Havasupai tribe, has been in business for almost 100 years and contains a large refrigerated section for groceries mailed from the top of the canyon.

The small office at the bottom of the canyon is in the perfect place to service the small population that makes up the Havasupai people’s village, but post offices have to get their mail from other post offices, and reaching it is a dangerous journey. A caravan of people and animals ferrying packages from surrounding offices has to travel down a series of switchbacks that drop more than 1,000 feet within the first mile of the dusty and rocky terrain. Once the steep descent is completed, the trail snakes along the bottom of the canyon to the Supai Post Office. A normal day involves two mules traveling down the steep trail followed by a wrangler on horseback.

In his reckless drive for cutting costs, I suspect that DeJoy has instructed the wrangler on horseback to shoot the mules if they ever bring up the subject of unionization. He probably thinks that the cost of alfalfa instead of using the cheaper hay would bring on postal bankruptcy.

By far the most expensive item to be shipped through the mail was the allegedly cursed Hope Diamond. In November 1958, New York jeweler Harry Winston donated the diamond to the Smithsonian Institution for the National Jewel Collection. Valued at over $1 million at the time, the diamond was shipped to the museum for only $145.29, which was mostly package insurance for the precious gem. Today, the gem is valued at more than $250 million, and in some areas, it is valued at $350 million. I have seen the Hope Diamond at the Smithsonian, and I must admit it looked like any other blur. Now I realize I was seeing the most expensive blur in the world.

As the Christmas season has already begun you are probably missing your Christmas cards. Some estimate more than last year’s 38 percent of holiday mail will not be delivered on time this year. One easy explanation for the sudden tardiness is the fact that last year over 5,800 postal employees were attacked by dogs. California ranks first but they don’t count because most of those dogs are toy poodles, which can only scratch your ankles, but Texas came in second with the most attacks and our dogs are bigger. Could it be that DeJoy has recruited people to train a canine corps that will attack anything that looks like a mail-in ballot? Has he hired smart enough people to teach the dogs the difference between a usually square Christmas card and the more prominent rectangle of the mail-in ballot? Who knows? Only Santa knows!