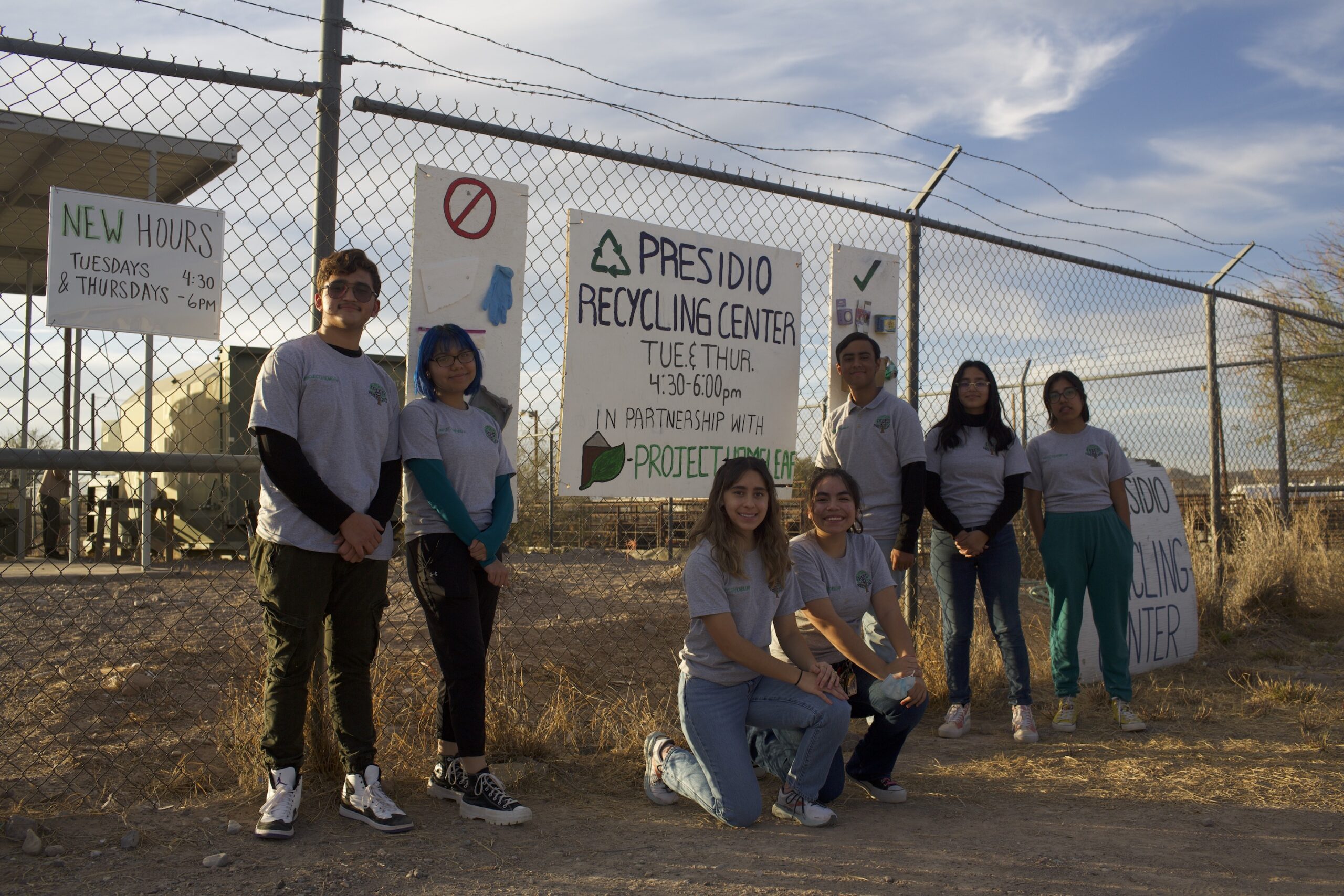 PRESIDIO — Down on the city’s south side where the main roads become dirt and tidy homes turn into blocks and blocks of cattle pens, there’s a concrete slab, a commercial baler and what looks like an abandoned railway car. It’s next to the lot where the city dump takes piles of tires and worn out city vehicles, including the shell of a former Presidio ambulance resting after years of heavy use. It’s the kind of place you’d start to wonder if you stumbled upon a group of teenagers — you’d assume they were up to no good.

That’s not the case with the Project Homeleaf kids, who have gathered here after school to try to revive the city’s recycling center. Project Homeleaf is an environmental science club at Presidio High started by Ramon Rodriguez Aranda and his friends who grew up in Presidio and have known each other all their lives. Recently, they were responsible for planting 25 trees in town with some help from Jim Martinez and City Water Works Director Cesar Leyva. More trees are on their way next year, and they’re hoping to build a town greenhouse and community garden too.

With the sun setting behind them, Angela Ocon, Adilene Porras and Kenia Hernandez knelt on the concrete slab, working to make sure plastic boxes and tin cans stuck to a piece of plywood. They were making new signs to mark the entrance of the recycling center, a city service whose use has waxed and waned since the program was launched in 2012. Hernandez is the artist of the group. They decided to go with the nailed-on recyclables instead of drawing out accepted items for a more engaging, three-dimensional presentation. She sourced most of the materials, and her only regret is not putting a coat of varnish over the paint on the signs to protect them from fading in the sun.

The recycling is a relatively new Project Homeleaf cause. At the Presidio City Council meeting held September 20, city officials introduced a budget item to shutter the facility, with concerns that it cost too much money relative to how many people were actually using it. The Project Homeleaf crew, along with Presidio resident Elvira Hermosillo, showed out in force. They gave powerful speeches testifying to the center’s importance — not only had loyal recyclers been visiting the facility weekly for over 10 years, they felt it sent an important message to the world: Presidio is a progressive city. Presidio is a green city.

For all of the kids — including Aranda, a budding local activist — it was their first encounter with city politics. “Ms. Hermosillo contacted us,” he remembered. “She was like, ‘I know you guys are here really trying to make things happen in Presidio. So can you come to city council and help us out?’”

Most of the Project Homeleaf students have known Hermosillo since the first grade, when she made an Earth Day presentation as a special projects employee of Presidio ISD that changed their lives. Even as high school juniors looking toward going to college and leaving home, they all still talk about that day 10 years earlier, when they were introduced to the concept of caring for the earth in a fun and engaging way. “It was so much fun because we didn’t just stay in the classroom — we planted seeds, we had a day where all rode our bikes to school and had bike races. We did a color run where everyone got to slide around in the mud,” Hermosillo remembered. The trick is creating enough excitement in the classroom that students will go home and share the underlying message with their adults. “The little ones go home and tell their parents, and that’s how you get everyone to start adopting the behavior.”

Listening to Hermosillo talk about the recycling center’s early days, it’s not hard to imagine how Presidio kids got hooked for life on the mantra of “reduce, reuse, recycle.” “When this all started in 2012, we were just trying to get attention,” she said. At that time, the group had a pop-up recycling program on O’Reilly Street, where they’d flag people down and ask for cans and cardboard boxes. They distributed flyers around their neighborhoods and hustled their teachers for classroom recyclables. “One summer we went to Porters and the parking lot across from city hall and we had a flash mob — we choreographed the dances and everything.”

As the program grew and moved into its current-day facility, Hermosillo and her supporters wanted to model Presidio’s recycling center after its counterparts in Alpine and Fort Davis. A cardboard crusher from the school made its way over to the lot, then a larger compactor whose contents are transported to Austin whenever it gets full. Despite having a growing stable of equipment, someone still needed to sit under the shade structure and physically staff the facility. “There were some issues keeping volunteers,” Aranda explained. “They ended up shutting it down for about four years, and then when the new city budget came out, they were going to close it permanently.”

City officials like Mayor John Ferguson were surprised by the vocal reaction to the prospect of the recycling center closing its gates for good but heartened by the kids’ intentions to grow the program. “This facility is just a small little facility, but it’s planting a seed,” he explained. “These students are demonstrating that their generation really needs to have a sense that this is not optional. This is something that needs to be done moving forward.”

Project Homeleaf struck a deal with the city: keep the facility open, and they would be responsible for staffing it. The center’s new hours are after school on Tuesdays and Thursdays, 4:30 to 6 p.m. In the summer, they’ll probably be open later, but Hermosillo doesn’t want to keep the kids out after dark. “[The cost to the city] is fairly minimal,” Ferguson said. “It’s in the neighborhood of $500 a month, and a fee involved when the compactor gets picked up. When you look at that, and what we’re looking to accomplish, it’s like, hey, you’ve got to have some skin in the game. It’s not just gonna happen on its own.”

The Project Homeleaf kids’ outreach really began at home, where they talked to older generations of family members about the importance of recycling. Many of their parents and grandparents came from small towns in Mexico, where the concept of recycling seems a world away. “It was really hard for my grandma to understand,” said Porras. “She didn’t know what it was. I had to explain, you know, why our environment’s changing.”

Aranda had the same experience trying to explain the project to his grandparents. “I would tell them, all this trash is just going over there,” he remembered, pointing toward the cloud of birds swirling over the landfill. “You’re spoiling our ground. But we can actually renew [those materials] and make new things.”

“Since we’re kids, I think they just agree. I don’t know if they really understand it,” said Clarisa Villagran. “My grandparents, I told them, and they were just like, ‘Oh, okay,’ just to agree with me.”

However the Project Homeleaf kids are getting the message across, it’s working. In the span of 45 minutes, Norma Valenzuela came by to drop off a truckload of huge cardboard boxes for TV screens. The kids went to work stripping non-recyclable styrofoam from the containers. Sulamita Avila brought bags of cans that got tossed in the compactor. Vicente Bocanegra had the honor of turning the switch on the baler, a commercial model called a Cram-a-Lot that roared to life and crushed the material down to a fraction of its size.

“This is really our first step — remodeling it,” Aranda said of the new signage the kids hung on the fence to mark the entrance. “Then recruiting volunteers. For now, all I really want is for the community to support us as we bring it back so it’s more functional and accessible. I just want their support to help us keep going full time.”

Another major step for the operation will be garnering support from local businesses, who produce the majority of the city’s recyclables. Hermosillo tapped Abraham Ornelas of Tom’s Service Station as the recycling center’s top customer. “He’s our number one recycler,” she said. “He’s been recycling from the very beginning.”

The Presidio International caught up with Ornelas at his shop, where he was standing on the fuel tanks to get a better view of the technicolor sunset, a nightly ritual that’s come earlier and earlier as the seasons change. “I try my best — we all try to leave our footprint as minimal as possible,” he said.

For Ornelas, that means taking sustainability personally. Auto shops like his that trade in tire and oil changes are known to produce lots of landfill material, but he works with the other garages in town to coordinate recycling used motor oil and oil containers. Alongside a brisk business in gasoline and car batteries, he also sells a lot of beer, and has trained the guys at the shop to be careful with how they dispose of cans and empty cardboard containers. They’re small steps, but they’re worth the effort. “It’s easy not to do anything,” he said. “It’s harder to try and do something for the betterment of our future.”

The Presidio Recycling Center is now open near the intersection of 3rd Street and Stockyard Road on Tuesdays and Thursdays, 4:30–6 p.m. They accept plastic, aluminum, tin, cardboard, office paper and magazines. When in doubt, bring materials with a recycling symbol by — they’ll be able to help you decide if it’s recyclable.