Walking into the unknown: Ballroom Marfa artists in residence share thoughts on their processes, making music and cultivating authenticity in their work 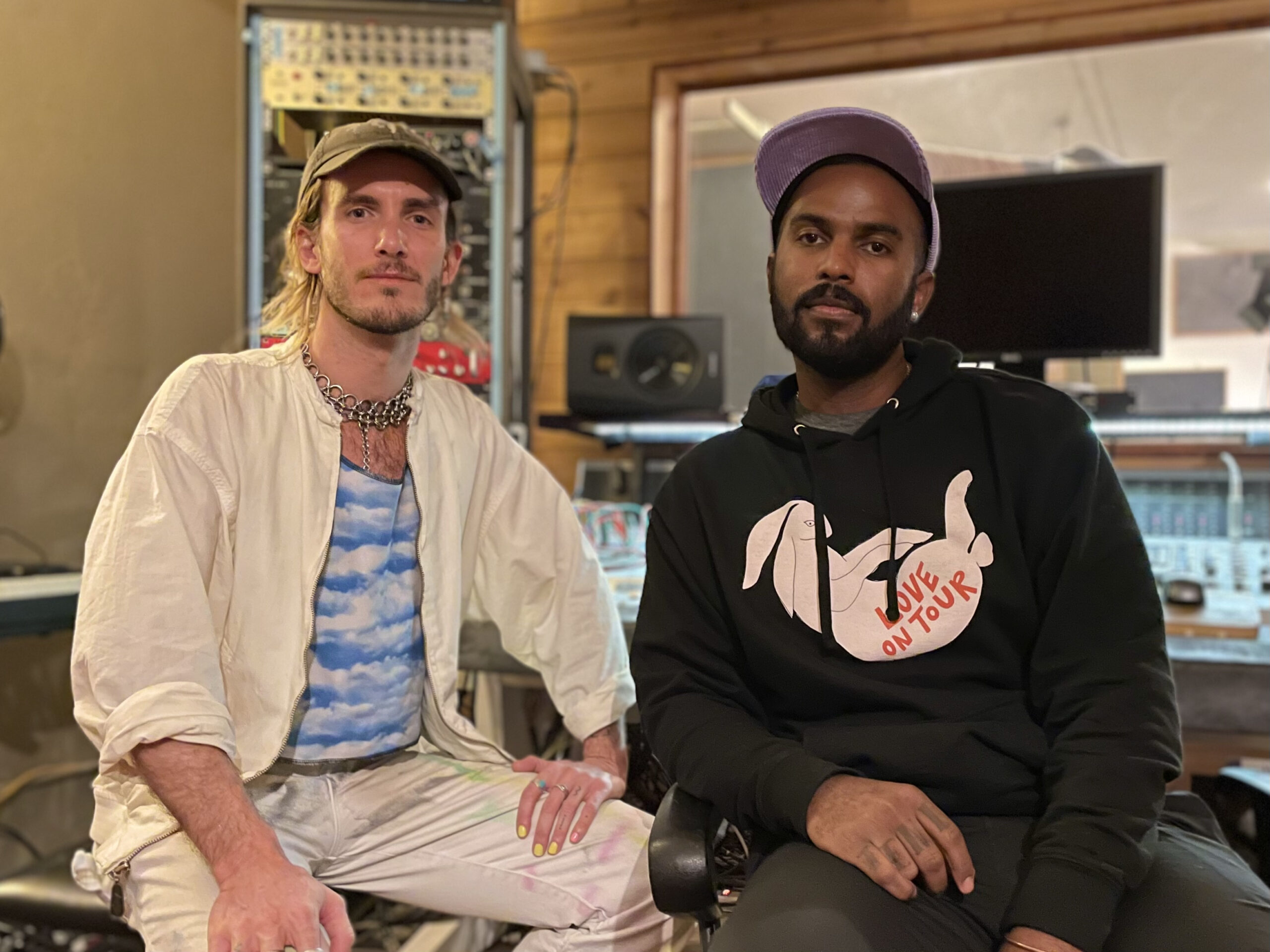 MARFA — Three Ballroom Marfa artists in residence — Morgan Bassichis, EJ Hill and Jeffrey Michael Austin — are songwriting, recording music and soaking in the high desert remoteness (and the Chinati Hot Springs) before their brief trip comes to an end and they return to New York, Los Angeles and Chicago, respectively. Each brings something unique to the conversation about making music in an art world context, and all three intend to continue their love affair with the Big Bend by returning to put on more art happenings, whether it be installations, performances, or a combination of the two.

New York-based performer Bassichis arrives in Marfa after cultivating a relationship with Ballroom Marfa Curator Daisy Nam. Bassichis is a comedian, storyteller and musician. Their primary studio space while in Marfa is the room adjacent to the bar at the Capri, complete with a commanding Steinway grand piano and lush textiles. The space was the site of a collaborative performance between Bassichis, their musical collaborator DonChristian Jones and fellow Ballroom artists in residence Hill and Austin on Wednesday evening.

“It’s cozy, it’s relaxed. My stuff can be a little cabaret, so somehow performing for people sitting around lounging seems fitting,” Bassichis said.

It’s Bassichis’ first time to Marfa and though their residency is nearly over, they hope to return to Marfa again to put on additional performances. Bassichis said getting to know a city, its environment and its people, always infuses their work.

“The places where I’m making work and the pianos that I’m using always inform the songs that I’m writing. I’m excited to see what kind of songs emerge here,” said Bassichis.

Bassichis has previously published a book of weekly to-do lists titled The Odd Years, made during the Trump administration. The next iteration will be a series of lists titled Questions to ask Beforehand. The list “Questions to ask before going to Marfa” poses humorous quandaries of “This is for someone else not me: But who is Donald Judd?” and “Can you get lyme disease from snakes?”

Humor has always been an element that helps Bassichis feel grounded in their work. The concept of showing people a good time as being a sufficient offering has also stuck with them.

“It’s like a compass for me and my work. If I’m making myself laugh, I’m going in the right direction,” said Bassichis. “Humor really, you can’t force it or fake it. It’s either there or not. So it acts like a North Star for me.” 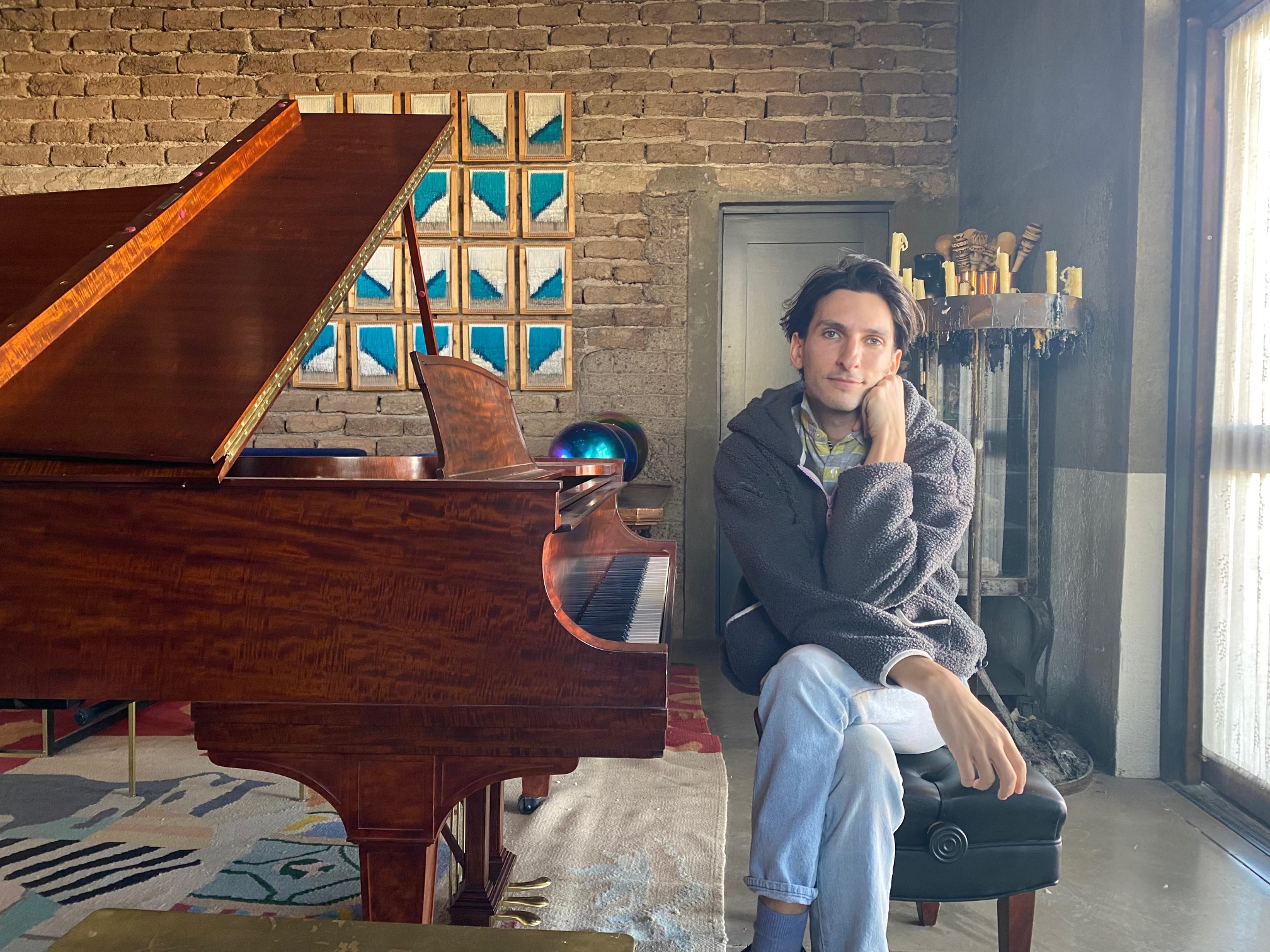 Ballroom Marfa artist in residence and performer Morgan Bassichis at the Capri where they have been utilizing the piano to create and rehearse new work. Photo by Daisy Nam.

As an artist, Bassichis has learned to value what comes naturally to them and tries not to get lost in ideas of what a performance should be. They said when those preconceived notions start to cloud their vision it’s important to go with what simply feels good.

“There is a spiritual, maybe mystical, certainly emotional process of walking into the unknown. A residency is a perfect example,” said Bassichis. “I have ideas of what I would want to make, but who knows what will come out. It’s the same thing when you’re writing a new song or writing a joke, you don’t know the answer yet.”

School plays and musicals are lasting influences for Bassichis, who grew up studying the piano. Recordings of female vocalists were often present in their home as a child and have continued to be the variety of music Bassichis gravitates towards.

Bassichis said they have found it productive to exist in more of an art than music industry context throughout their creative career.

“The space of experimentation, collaboration and improvisation, all were really compelling and exciting to me. I think it has been really important for me and allowed me to experiment with different forms over time,” said Bassichis.

During Bassichis’ time as an honorary Marfan they also co-hosted an online annual Hanukkah fundraiser on behalf of the organization Jewish Voice for Peace, which raised over $40,000 for the Adalah Justice Project. Bassichis performed for the live stream at the Capri surrounded by a multitude of partially melted candles, jokingly informing the audience they were performing from a castle.

LA-based EJ Hill and Chicago-based Jeffrey Michael Austin are back in Marfa for the artist residency after spending some time in town in 2020 during the pandemic. The two have been friends for over a decade and have collaborated on projects involving musical improvisation in the past, but have primarily focused on their institutional, visual art careers — until now.

“Our first trip to Marfa kind of marked the first time that we’ve ever actually sat down to write songs together, rather than just noodle around on instruments,” said Austin.

The duo spent 10 days at Marfa Recording Studio last December and emerged with one fully recorded track, an abundance of song ideas and a feeling of momentum. That February, they met back up in Loveland, Colorado, where they completed a five-track EP, I Want It Too, under the band name Daisy Days.

Hill referred to the seven-week stretch as a frantic musical production ferver. Like in the TV show “Music in High Places,” which ran on MTV in the early 2000s and featured musicians performing in remote areas, Hill said being in Marfa has allowed him to go to a space of deeper contemplation.

“Coming back here and then also going to Loveland, Colorado, earlier this year, kind of felt like me chasing this childhood dream of being the musician who goes off into this paired-down, wide open space to be inspired and to connect,” said Hill.

The musical element of Daisy Days symbolizes a return to Hill and Austin’s love of music, but because the two are multidisciplinary artists (or “multi-material,” a term Hill is playing around with) the intent is for more visual elements to be incorporated. The idea behind their lasting partnership with Ballroom is to one day host a more fully-realized music and visual art project.

“The musical element is just one layer of what we think will manifest over time. We may host physical art exhibitions, installations, live performances and probably all of those things kind of coexisting in some way in physical space,” said Austin.

As of late they’ve been focusing on an upcoming performance taking place in Los Angeles in February, which, with the exception of their performance this past Wednesday night at the Capri, will be their only other official live performance. They’re referring to the experience as a sort of “sonic studio visit.”

When prompted by Ballroom to dream up ideas for merchandise, Hill and Austin came up with the atypical idea to make plush terry robes people could wear while listening to the album, creating a multi-sensory experience. They’re considering a laundry list of questions about how to expand the project into a full on art-directed encounter.

“What are the optimal conditions for listening? When are we listening to it? What are we wearing? What type of fabric? Is it soft? Is it velvet? Is it something a little more substantial? Like creating the entire universe of what Daisy Days is or could be on every level,” Hill said.

“Again, thinking about how can we play with and queer and complicate these traditional music industry avenues in a way that makes them feel more aligned with our artful approach,” said Austin.

The pair conjures up images of pastel colors, clouds, lightness and airiness in association with the music they are creating. Their songs are tender and touch on themes of love and relationships. “Sad sexy” is their preferred genre of choice.

“Am I gonna cry right now or am I getting turned on?” Austin laughs.

Hill said the music also creates the space for them to love themselves in ways they may not have in the past.

“Owning the attentiveness, owning the sweetness, and finally coming to a point in life where there’s a little less pressure each day to be some hardass macho a-hole. To just be femme and sweet,” said Hill.